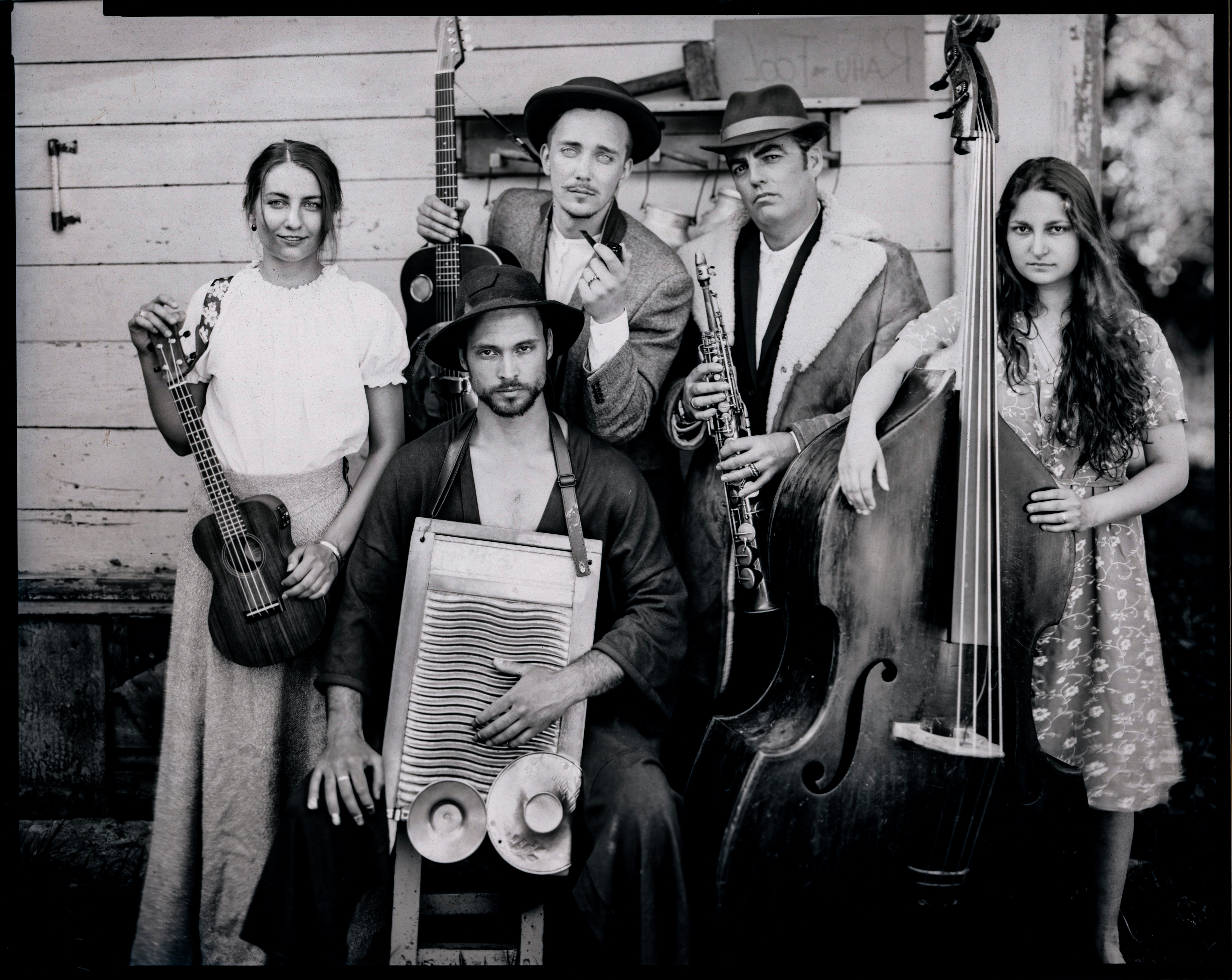 In November of 2018 a «beggars blues union» (as they call themselves) «Rahu The Fool» released their double debut album. It still isn’t clear to me what exactly does this name entail, and I have an impression that the band members don’t talk about it too much. I could as well ask, but this is a review not an interview, and I had to reveal what a listener finds in this information given in the album, not what the musicians have thought.

In front of me there’s a brown brochure in an A5 format, imitating a retro style, on the front cover of it there’s a band’s name «Rahu The Fool», on the back a band photo. The text in English under the photo makes us realize that the album was inspired by grandparents’ stories of love and war, of seas and fields. I open the cover, and there’s a photo album inside an envelope with younger days of two generations — of grandparents’ and musicians. Moreover, youth photos of grandparents seem technically more advanced than the band photos, which, thanks to Andris Uškāns, are taken using a really primordial photo equipment. Then we get a feeling that «Rahu The Fool» fool away the time — who knows, maybe it was them who their granddads were inspired with.

I’m still really curious — what is «Rahu» (at least on the Internet)? «Google» translation offers an idea that it means «calm» in Estonian. Is it a calm of fools? Probably! The other explanation is offered by Wikipedia, and leads us to some astrological ideas, telling that «Rahu» means a Northern knob of the Moon in Sanskrit. Looking at the album’s design and somehow sensing what I’ll now hear, the only closest connection to astrology in my opinion is that both discs will in a minute spin around their own axis just like the planets. Yes, it begins to give the idea that the meaning of the name isn’t that important — it just sounds good — and I also have no idea what the granddads have told the musicians. I continue looking at the album design — and I see what the Latvian Annual music record award «Golden Microphone» have meant by especially appraising the design created by Monta Kurme. In my opinion, the special thing in this design is two naked pictures of the ladies which one can see the moment he takes a CD out of the box — there’s a naked flutist and a naked mandolinist, that could also be one and the same model who has bravely posed in the last century, pleasing the eyesight of young granddads.

The first thing I’d like to say about this double album after listening to it — it contains a really warm and enjoyable sound, and I guess, the sound engineer Kaspars Bārbals and his work at the «Lauska» studio should be appraised for that. And, of course, that joy of life couldn’t be put into the recording without the musicians themselves — Pēteris Narubins (vocals, guitar, mandolin, mouth harmonicas and kazoo), Jāzeps Podnieks (vocals, flute, washboard, ukulele and a bottle), Lauma Bērza (vocals, violin), Evita Bambāne (double bass) and Benny Zeltkalis (soprano saxophone and ukulele). There have been some guest musicians invited over as well — Svens Vilsons (guitar), Madars Apse (vocal, guitar), Marija Broča (vocal), Toms Valmiers (double bass).

It’s really surprising how an energy like the one that is shown during a live concert can be recorded as well. And, while listening to the details, the vitality of music of the ensemble is what surprises me the most, along with the ability to make each of the 29 songs sound dynamic, colorful and unique, both giving some space to the virtuosity of solo instruments and skillfully accentuating accompaniment.

There are some of the vocal and instrumental works, composed by «Rahu The Fool» themselves, but most of all the content consists of the compositions from the first part of the 20th century — most of them being folk music and blues. 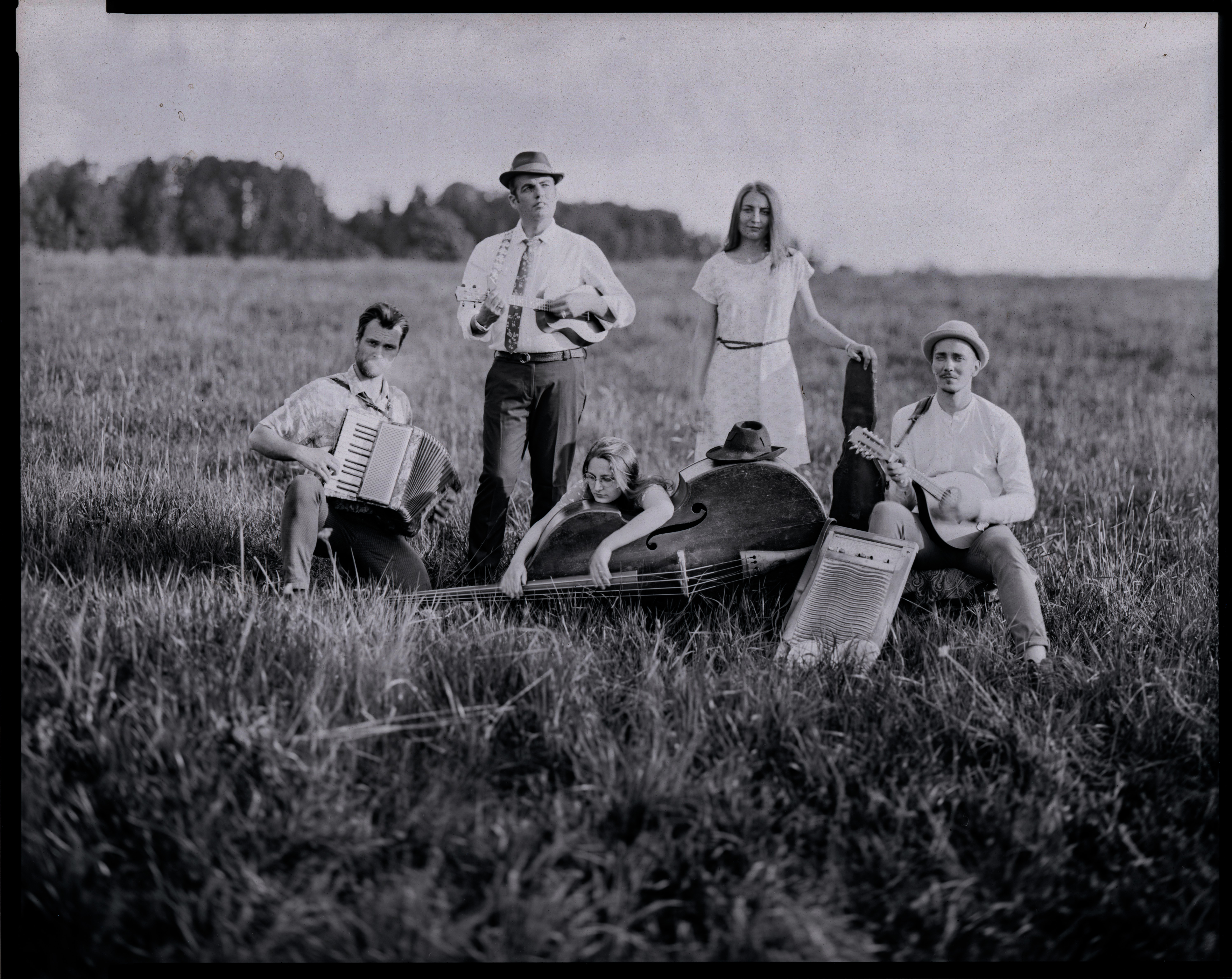 The first of the CDs called «Rahu», in my opinion, is a valuable thing for us, Latvians. Folk songs by brothers Laivinieki are now made alive with a bluesy and very enjoyable and fresh sound quality. The musicians can also sing a capella — this is heard in «Jūrnieku dziesma» (Seamen song). The compositions «Sāremā» (In Saaremaa), «Taiga» and «Stepe» (Steppe) bring us some pleasant relaxation from a textual world, letting us listen to the music flows of the other nations and a free interplay by musicians. In turn, daring to perform a composition «Četri Balti Krekli» (Four White Shirts) by Imants Kalniņš, composed for a 1967 movie «Elpojiet dziļi» (Breathe deeply) by Rolands Kalniņš, in my opinion, is a very brave step, because a sound of the Pauls Butkēvičs’ vocal and armed forces ensemble «Zvaigznīte» (Little star) of that time is really hard to erase from our memories. Although nobody can deny the musicians the right to play it as they want it in their own Western style, if they really like that song, and we can feel it as they sing those words emotionally.

The second CD called «The Fool» brought less emotional response from me. It actually has nothing to do with the music — it’s just as good and qualitative. It’s just that the Latvian cultural values in the first CD made it sound so more impressive, that the second CD got less personal and was left hanging impersonally in the air. In my opinion, earlier blues recordings and compositions of the Mississippi estuary region are a separate cultural heritage, which most probably are to re–inherit by those who were born on that side. Although it isn’t forbidden to play all that — play and sing in the foreign language all you like, making compositions which that blues sound is inherited from, which is really nicely felt in the manner of playing in the first CD. A very special dessert in the second CD are the vocals of Marija Broča, which is especially powerful in the very womanly song «Little Bit of Rain» (1965) by Fred Neil and «Trouble So Hard» which, thanks to a 1902 recording by Alan Lomax, performed by Vera Hall, got noticed by the audience in the 90ies when Moby sampled it in his music. In «The Fool» CD this is one of the two a capella songs. The second is a song of Irish seamen «Haul on the Bowline», which pleasantly refreshes the proportion of blues and ragtime with the help of bright mens voices.

To sum it all up, you can’t describe everything as is — my written words are hiding a non–verbal delight about some separate solos, which it’s still better to listen then read about. «Rahu The Fool» have invested a really fine work into their double debut, unfolding that each of them has more than two granddads, and most of their musical grandparents have lived on the other side of the ocean, played the guitar with or without a metal resonating board, with or without a washboard… I still don’t get the «Rahu The Fool» name, but I do understand their variety and musicality.