A talk with the LUPA band on their newest recording and differences of the recording format, musician influences and counterparts 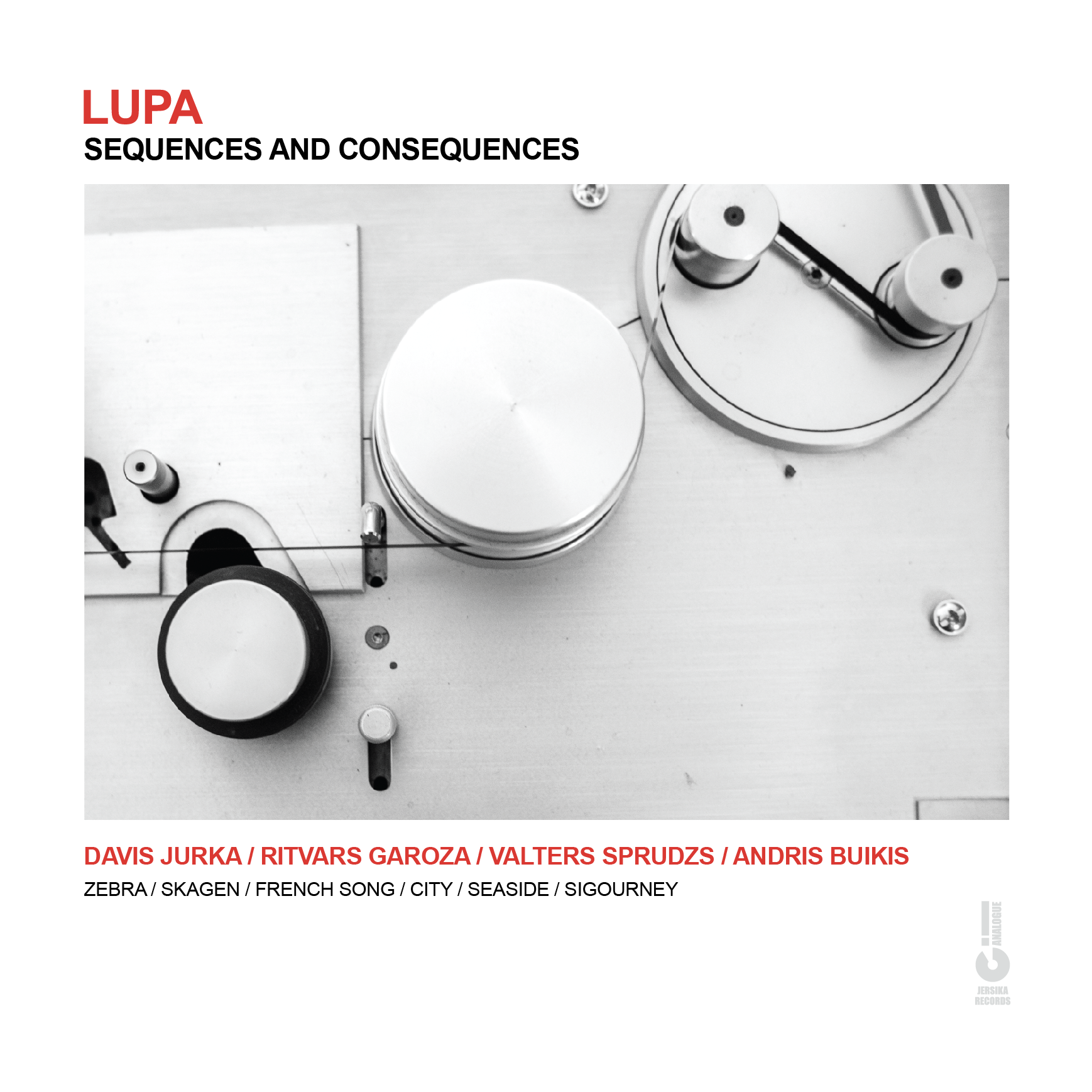 As a collector of vinyls I can say that it seems that the album «Sequences and Consequences», is a newest Latvian soul–jazz, fusion record in a vinyl format since «Laura», a plate released in 1979 by a trumpet player Gunārs Rozenbergs. Have you heard «Laura»? What are your impressions of it?

Dāvis Jurka: Yes! It was one of the top recordings for us at the time of our dorms. We’ve been listening to «Disko roze» at every party. I have to admit, that was quite often. I’d be happy to get this in vinyl, because I only have a digital recording now. I think though, that our album couldn’t be so easily compared to «Laura» by Rozenbergs — it reminds me of a disco with some jazz elements.

Andris Buiķis: Yes! Actually it’s a very good recording, concerning both the sounding and the composition. There are some flaws from the Soviet times, but all in all I think this could be considered one of the best jazz albums of the Soviet Union.

Valters Sprūdžs: Yes, I have this vinyl at home. I’ve been listening to it once, don’t remember if it was in my childhood, or when I was a teenager, when I started playing the bass. I remember reading through everything on the cover carefully.

In 1979 the recordings were done in an analogue style, on tapes. The album of LUPA is also recorded analogue, on a tape, without any overdubs or separately re–recorded instrument phrases. Please share your feelings on this experience of recording the plate like this.

Dāvis: I’d say I needed to live in those times. Frankly, I think that this is as close to a real music as it can get. Of course, the musicians were cutting and glueing tapes in the 70ies as well, but it of course happened on a smaller scale then it happens to digital recordings now. This is a meditative process of sorts, beginning with a recording itself, and a listener has a good feeling that what he listens to hadn’t been edited with some modern tools — the musicians play it precisely like this.

Ritvars: That is like playing a concert. You get that there wouldn’t be any chance to improve it or play it all over again, which is very common nowadays. You really have to be at that moment and time, because you know you’ll have no chance to return there, as it would be possible in the case of a digital recording. You also have to do the planning beforehand — tones, volume levels, trajectories of movement, if you have to play many instruments in one song. Because of the fact that the analogue instruments might create some noises, you have to plan which of them you wouldn’t use to create a sound which is more pure. Some tiny details appear that you wouldn’t think of in some other situations.

Valters: When recording analogue on a tape, the sound engineer’s job gets way more important, because you cannot remix anything later on — it stays completely as it was recorded on tape, that’s it. And here we have to say a huge thanks to Gustavs Ērenpreiss who did an amazing job.

Of course, us, musicians, also don’t have any chance to improve anything, as it would have been in the digital environment. This makes a final result a bit more rough, but more open.

And, of course, a plate is a format which returns to a wider use, thanks to the fact that there’s a listener who wants enjoying music to become an event with a capital E again.

Andris: Knowing that you’re not able to add anything or take anything out, as we’re used to do with digital recordings which you can quantize or replay just one instrument, do anything you want, then a tape recording demands a way higher level of concentration, so that everything is perfect from the beginning to the end. And, of course, the sound of the tape itself is warm and really differs a lot from the digital one.

Dāvis, I remember that when I talked to you on a «Jersika Records» concept of a fully analogue recording, you told me right away that you’d like to record LUPA like this. How did this ensemble appear? How do you define the musical platform where you work or would love to be working at?

Dāvis: A thanks goes to Ritvars and Valters who are the authors of the idea of this band and compositions on this vinyl. Ritvars knew that I had an interest in an alternative saxophone sound from the times of the «3Stick» band, and invited me over, we began working together. Analogue synthesizers, improvisation, soundscaping, live sound these are the elements that perfectly go along with an analogue recording process. I think that the other band members will agree that this platform is really interesting to us. As I already said, I like real things. 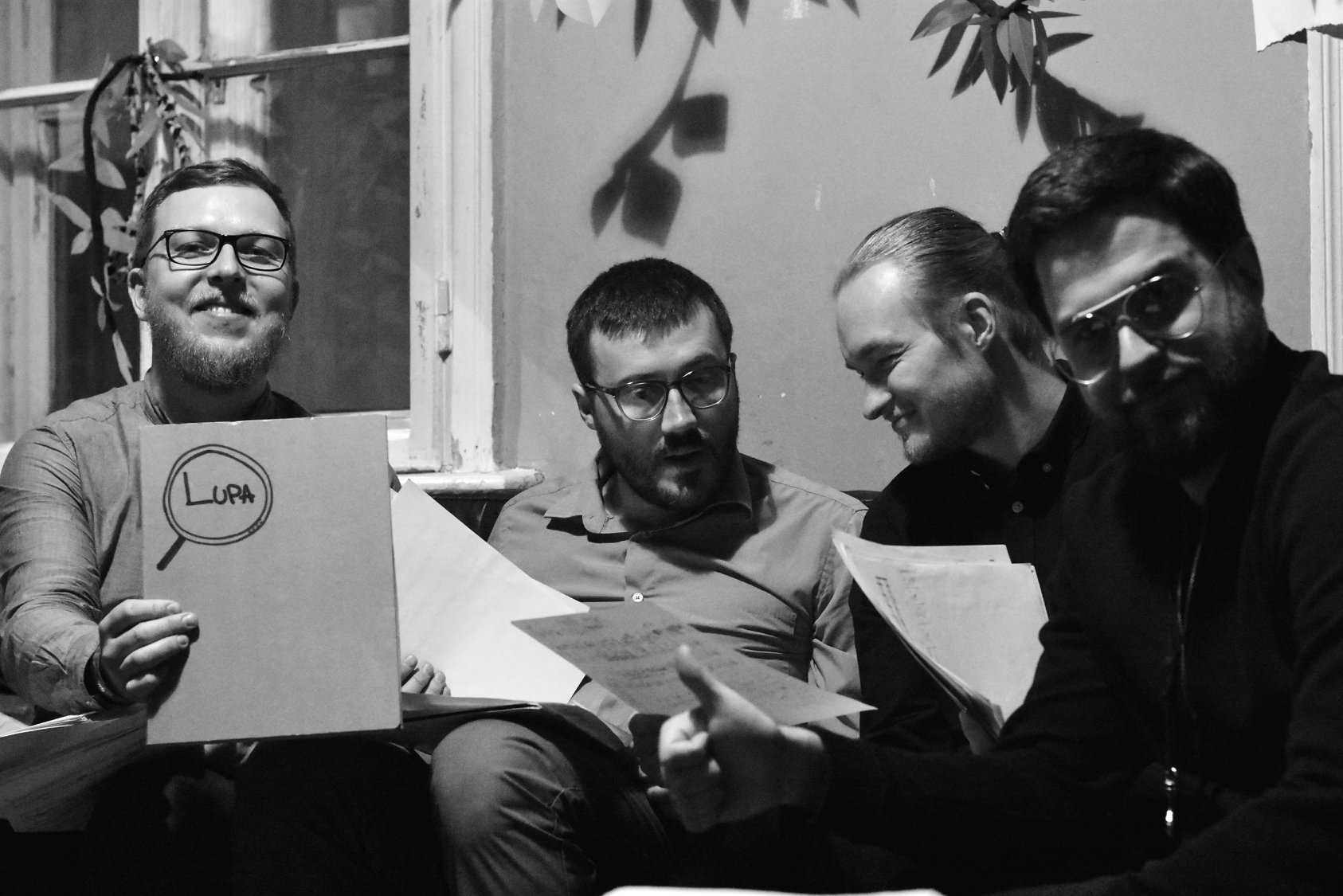 Ritvars: The band appeared after a concert with Valters. After–concert talks. Word by word, until we reached the point where we felt we could play together.

During many meetings within a years time we’ve put together some musical ideas, and there was the feeling that we could invite a couple of more members. That’s how we decided about the the line–up. It’s hard to describe ourselves. We call the music we create «songs», even though it’s an instrumental music. A direction in which we’d like to act is just being formed. It happens with every rehearsal and concert, with every new «song». Is we compare new songs with the ones we’ve began with, you can notice that the music changes, but which direction does it move to? This is now unpredictable.

Valters: The cornerstone of the band’s creation was a friendship between me and Ritvars, our wish to play together and create new music. It was clear from the very beginning that Andris has to be in the line–up, and Ritvars offered us to take Dāvis as the fourth member. I haven’t played with Dāvis before that, even though I of course value his musician’s skills very highly. After the first rehearsals it was immediately clear that this line–up creates its own chemistry and every member brings in something new, enriching and broadening the sound. We create improvised instrumental music.

Andris: I’ve always stood for harmony and melody, everything else is just a choice of sound and toying with time. A time spent with thoughts or discussions on the style and direction in which we’re going isn’t interesting at all.

Mareks: I think that the «Sequences and Consequences» plate shares the wave with the other soul–jazz, electric–jazz, fusion albums recorded elsewhere in the world. Do you follow the music tendencies? In England, for example, a jazz renaissance of sorts is happening now, with new musician generation joining it. One of the bands of a saxophonist Shabaka Hutchings «The Comet Is Coming» is an ensemble which LUPA could tour with, for example.

Valters: Thanks for the compliment — it’s a pleasure to listen to such positive impressions on the sounding of our album. I haven’t heard the saxophonist you’ve named yet, but I’ll definitely check him out. Of course, I follow this kind of music, I love Jojo Mayer’s band «Nerve», as well as «Forq» and «Snarky Puppy». I have to admit that I listen to very different music and try to follow the news as much as I can.

Also I have to admit that the songs of LUPA are just as we feel them. We’ve composed the most of the things together with Ritvars, and then just molded this clay as we wanted to and as the music lead us. Of course, then at the rehearsals the four of us make the sound even better, and only then the compositions sound like they should. The percent of improvisation in our music is really high sometimes.

Ritvars: Nowadays there’s a lot of opportunities, and the social network and the internet shows a lot. I follow some works of specific composers and performers, and I see how their tendencies change. Sometimes my colleagues recommend some of their favorite albums, sometimes, clicking on Spotify, you find something that will later on become your favorite.

I also pay attention to the news about synthesizers, effect pedals and the other musical gadgets. This world has now turned big and beautiful, giving the music creators new opportunities in the world of sounds. While reading or watching news, a huge joy overtakes me when I see the products created in Latvia («Erica Synths», «Plasma Pedal», «Plus Pedal»). While searching for the music, I follow the compositions which I’d like to listen to all over.

Dāvis: Yes, I of course follow it, even though I mostly listen to some older recordings. I think that jazz renaissance happens in Latvia now as well. Our generation has its education, experience and fresh view on things. I think that it’s inevitable to be able to talk to one another, not put some barriers between people, and I think this is exactly what is happening. And this is really good. Of course, it’s great that there are people like you, who support and create a platform for musicians, and offer a great opportunity to musicians to record and popularize Latvian music abroad as well. Latvia is beautiful, but really small, if we talk about the world of music and venues to play at.

Andris: I personally haven’t heard of that band («The Comet Is Coming»), but, after listening to it for a bit, I have to say that we’re thinking in a completely different way. I’d even say we’re a bit more grounded, but at the same time, a bit crazier.

What do you wish to the listener of «Sequences and Consequences»?

Ritvars: To have a song staying in your memory and to have a wish to hum it in your head from time to time!

Valters: First of all, I’d like to say thank you to every listener for finding us and dedicating his time to us. In this era of rush a non–shared long–term attention is something rare and valuable. I wish that our music would charge a listener.

Andris: May there be peace and a clearness of thoughts for everyone whose ears were reached by this musical journey.

Dāvis: Find some time to pour yourself a glass of some good drink, relax in your favorite chair and listen to an album from the beginning to the end, not looking at your smartphone at the same time.