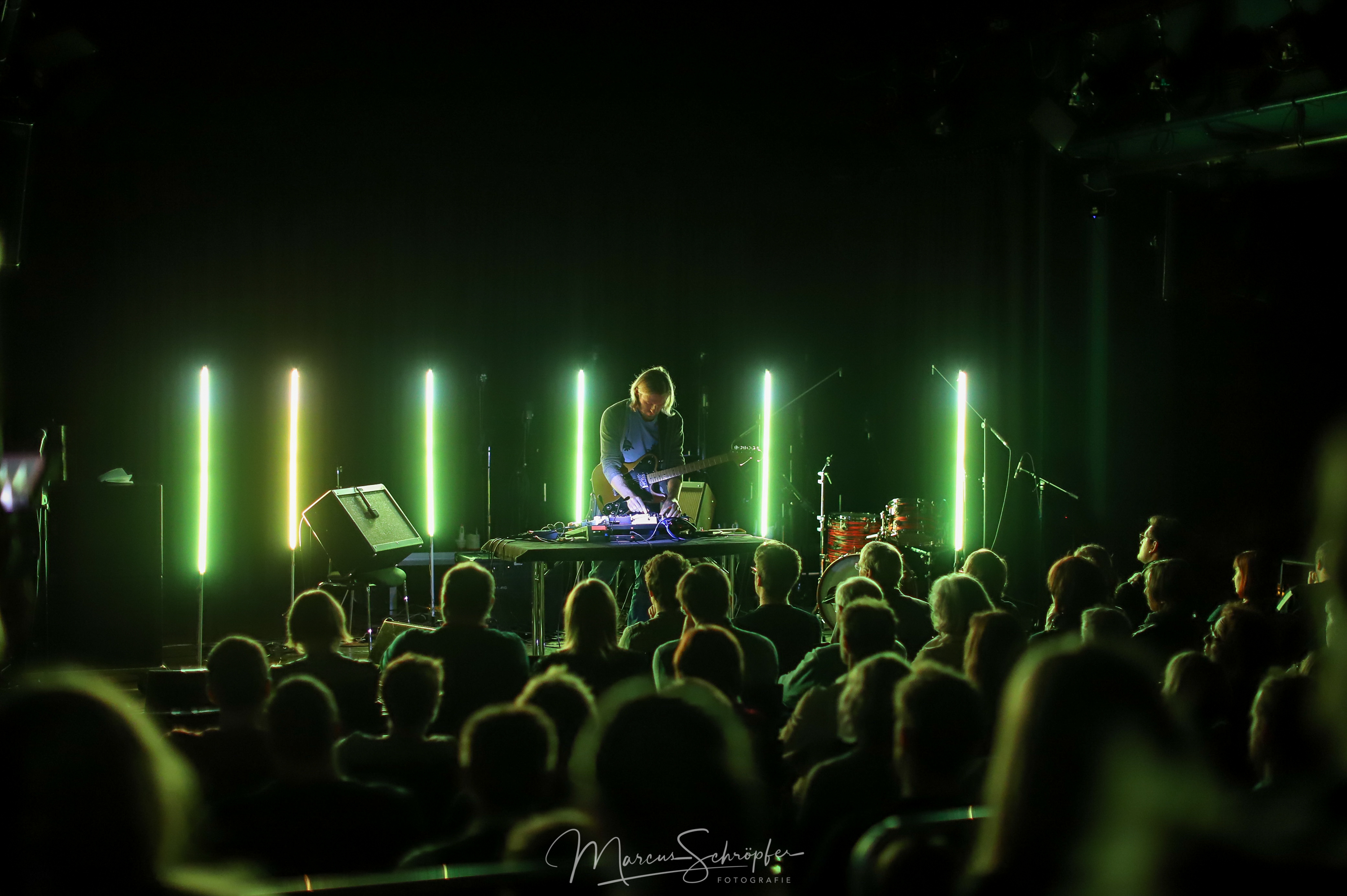 Last year was very noticeable and full with different cultural events in all three Baltic states. Huge celebration of centenaries, enormous number of concerts and other events — it all served as a great source of joy and inspiration to locals and the guests of our countries throughout the whole year. And even then the celebration wasn’t limited by any territorial rules, it happened all around the world and especially in the hearts of the people who have some tender memories of our lands. And because of those Munich, a German cultural metropolis, in 2018 gave birth to a completely new festival dedicated to the Baltic States — «Baltic Breeze».

The idea was authored and brought to life by two young German jazz singers, Kilian Sladek and Florian Stierstorfer. Kilians connections to the Baltics were rooted in 2015, when he decided to spend a year of his «Erasmus» studies in Jāzeps Vītols Latvian Academy of Music in Riga. During that time he has made contact, and later on friendships, with a lot of representatives from Latvian, Lithuanian and Estonian jazz communities, which after several years of creative brainstorming and hard work resulted in this original festivals birth. We were invited to represent Latvia’s musical field, and together we were «Equanimity Trio» with Jānis Rubiks (double bass), Edgars Cīrulis (piano) and Jānis Jaunalksnis (drums).

«Baltic Breeze» festival took place on December 8–10, and it’s central event was a gala concert in Munich’s cultural center «Gasteig». This center’s motto is — «Surrounded by culture» — and this description fits like a glove, you can see proof to that in the environment surrounding it with its constant movement. «Gasteig» is a place that hosts several entities at the same time — Munich’s philharmonic orchestra, University of music and arts, central library, several concert and performance halls, and other parts, integral to the cultural life. The Baltic festival was graced by the «Black Box Theatre» hall with a setup that goes very well with the concept of a creative music concert. The space is compact, listeners and musicians are being very close to each other, the acoustics were dry and, which works well with the 250 available seating places.

Our flight has landed in Munich on the morning of December 8th. I have to say that we were met with a very pleasant change in weather conditions, diving from a deep winter right into spring. While Riga was raged by snow storms in –2 temperature, Munich had the sun shining brightly, the air as warm as +8 and a light spring breeze. All in all it looked like the «Baltic Breeze» visited Munich much earlier than the Baltics. 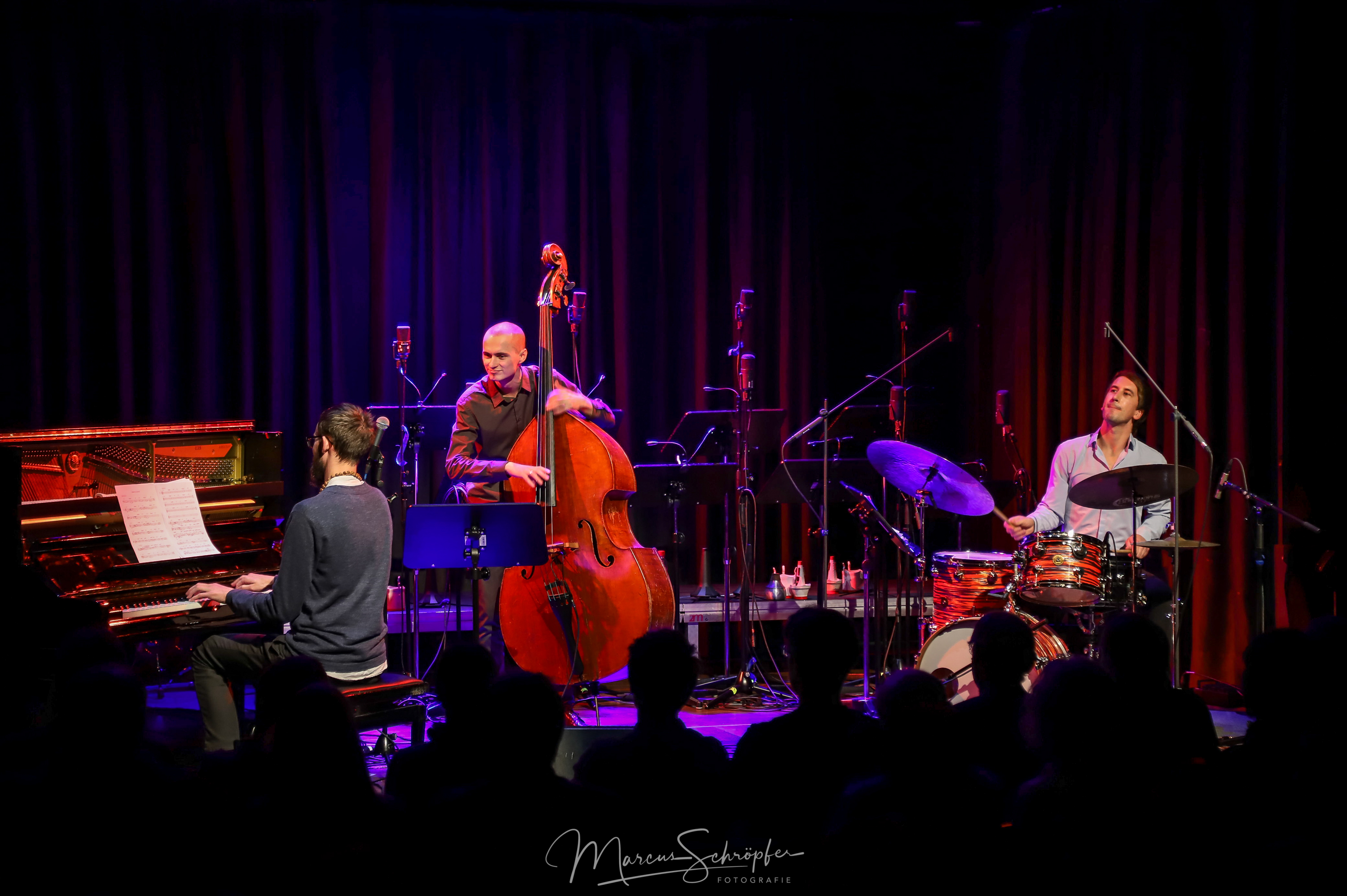 In the airport we were met by Kilian himself, and it was nice to see that he had arrived in a new, stylish SUV, designed with the visuals of the «Baltic Breeze» festival. We could see right away how much effort was invested in the preparation of the festival and into finding supporters (it is even more understandable to those who at least once in their life had made an attempt to attract sponsor support to some kind of event in the field of culture, especially if we speak about auto dealers!). We came to a conclusion that even while organizing a festival for the first time in their life, they managed to over achieve their goals, because in addition to several significant sponsors, the festival was also supported by the embassies of three Baltic states. Later on Kilian admitted that the time it took to organize everything took more than a year.

The following activities of the first day were planned in a way to help us get used to the environment of the festival. First of all — a hearty dinner in the «Gasteig» complex restaurant (organisers took great care of our meal stomach’s good mood!). After that we were given the opportunity to use universities rehearsal spaces. And at the end of the day we were invited to attend a small gathering/official festivals opening event. That was exactly where we finally met our colleagues from the neighbour countries — a guitarist and solo artist Argo Vals (Estonia) and a multi instrumentalist Saulius Petreikis (Lithuania), who came to Munich with his ethno jazz project. It came as a pleasant surprise to meet the people we have already seen and heard at different concerts and festivals, and some old acquaintances as well, that made me remember the fact that our jazz community is a united front and the we grow and evolve together. And of course it was a great joy to meet the president of Latvian Community «Namejs» Laila Dambekalna.

The next day had started with a late morning, that we used to engage in a stroll around the city. Even though there was no sight of snow, the air was full of an approaching Christmas rush and the streets of the Old Town were crowded with tourists and bright booths with hot wine, almonds and different souvenirs.

In the afternoon we went back to «Gasteig» complex to do a sound check, and shortly after that the main event of the festival took place — a concert of all participants.

Moments before the concert the atmosphere was electrified, the concert hall full with people earning to fill their ears with the sounds of good music and finally, when the lights dimmed, the concert could start. The host of the concert was a local radio station’s «Bayerische Rundfunk–Klassik» musical broadcast editor and jazz journalist Gino Thanner.

Estonian solo artist Argo Vals was the first act. His electric guitar, an impressive amount of effect pedals and loop station, three guitar amplifiers and LED light show (the artist had brought along his own light engineer) where the main elements of his performance. The act was full with quotations from different worlds — electronic music effects, a strong rock and post rock rhythms and up until the «out of this world» modifications to his guitar sounds. The audience had accepted him with great pleasure and ovations.

Our turn to go on stage was right after him. After a short line check and a short announcement from the host, we were given the go to start our part of the concert.

We have claimed the stage as our own with hearts full of excitement and a great deal of positive creative energy, that was begging to be released, as it always happens before the performance. Without any unnecessary introductions we dived straight into the first tune — an energetic composition by Edgars Cīrulis «Three’s a crowd». It was clear as day, that every member of our ensemble was willing to do his best and to play the most honest and qualitative music during this amazing evening, dedicated to the Baltics. At the end of our performance we realised that the listeners were perfectly warmed up and were generous with their support and applauses.

Our performance was built of Edgars’ and my original compositions, the program was planned out with ever changing dynamics, so that our musical flow would constantly engage the listeners. We tried to include different aspects into the performance, like adventurous improvisations of the trio and a hint of melancholy, that is so close to our people and honestly, we felt that it was appreciated, it was clear by the amount of the applause after each composition. I have to give high praises to the technical part of the festival as well — the sound and the light equipment and management was on a high level, we felt very comfortable on stage.

After our performance ended, we were happy to greet our Lithuanian colleagues on stage — Saulius Petreikis and his ethno jazz / world music band that consisted of a soloists brother Donatas Petreikis on guitar, Augustar Baronas on drums, a double bassist from Poland Mariusz Prasniewski, and a violin virtuoso Vytautas Mikeliunas.

I managed to listen to almost the whole performance of this band and it caught me absolutely unprepared. Saulius is a phenomenal multi instrumentalist who sings and plays different woodwind, brass, folk and a bunch of other wind instruments from all over the world. I haven’t had a chance to count the precise amount of instruments in his arsenal, but each tune had at least one, but probably more than one different instrument — a trumpet, doudouk, goat horn, Persian flute, Egyptian flute — these are only the few I could remember of.

The sound of the ensemble was very powerful, the timbres rich and extremely exciting. Their original compositions consisted of all kind of different world music traditions — Lithuanian folk songs, Balcan dance, Caucasian throat singing, whirling gipsy–ish violin passages and many many more. 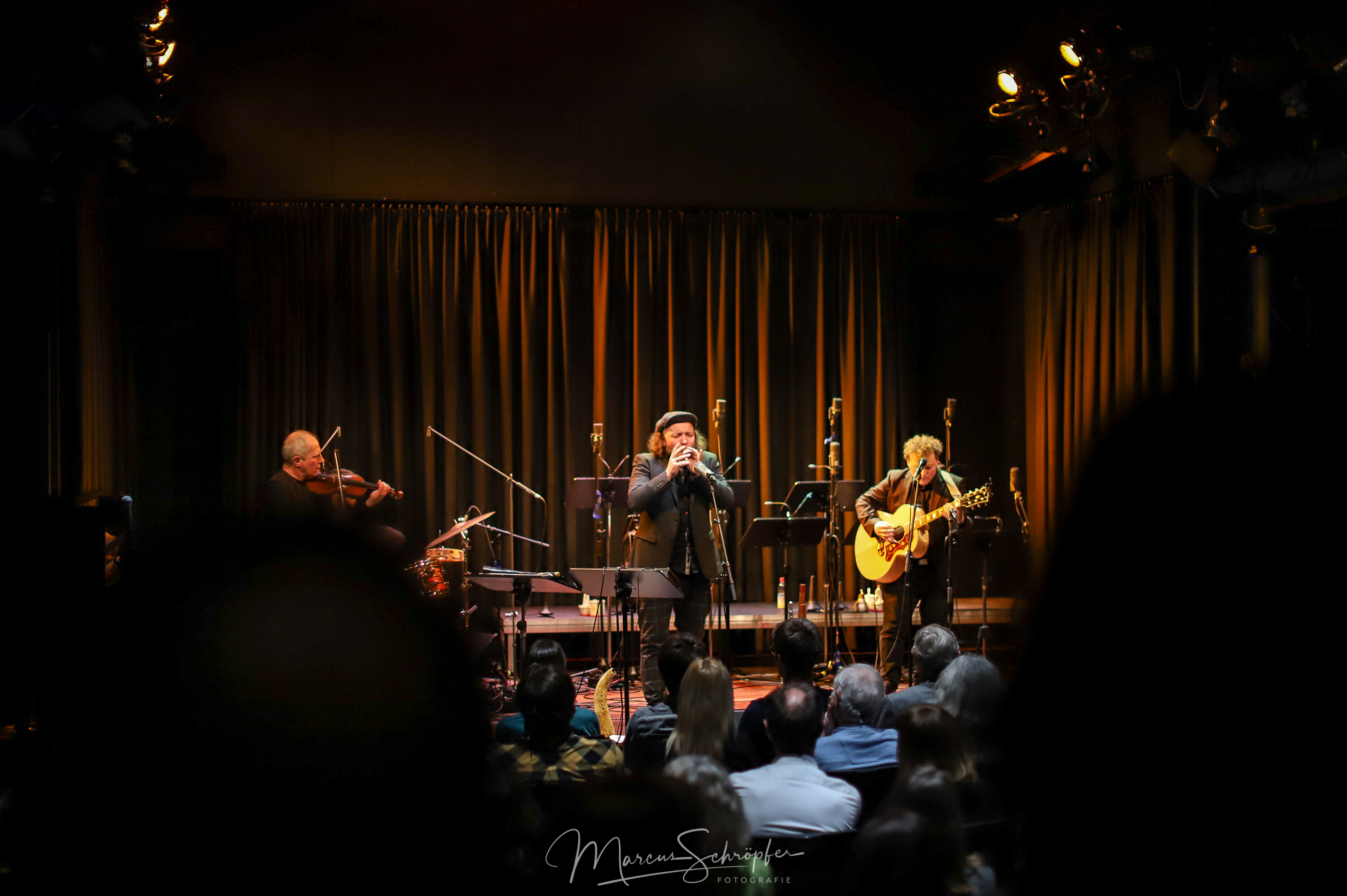 And finally in the end of the evening a completely fresh composition was presented — a local Munich ensemble «Jazzrausch Bigband» with Saulius Petreikis as a guest artist performed «The Baltic Suite», a piece composed especially for this festival. A composer for the composition was selected in a special competition several months before the festival, it was a young German artist Vincent Eberle. The composition was built as a three part suite, each part representing one of the Baltic states. A colorful, modern and virtuously performed Baltic suite was a great final touch to the festival. After the concert all parties involved were invited to an unofficial afterparty, that was filled with emotional moments of satisfaction from such a successfully made, planned and conducted jazz festival dedicated to the Baltics.

The next day, when it was time to go to the airport, I caught myself thinking that it is so wonderful, but at the same time unimaginable how fast such a bridge between different cultures was built. The Baltics receive an opportunity to present their artists to the ever growing number of listeners, to strengthen cross–cultural connections, and that simply reminds us that we do have reasons to be proud of our region.

I have to say that the true heroes of this event are Kilian Sladek and Florian Stierstorfer, because the amount of work and effort it took to make this festival happen is just humongous, all these sleepless nights and e–mail mountains, mediations, conversations, presentations that have to have a lot of love for the music to survive through all that. And another amazing thing — their enthusiasm is endless, because on our way to the airport Kilian had revealed, that the very next morning he had a meeting where the faith of the next years festival would be decided. I’m saying a huge thank you to them for this beautiful work!

In conclusion I would love to share a quote from Kilian. In one of our recent e–mail conversations I had asked his about his source of inspiration, how did he come up with this idea, His response was: «I decided to organise this festival because I wanted to give something back to the Baltic states and their cultures, especially to Latvia, for the great time I have spent there during my exchange studies in Riga. I had appreciated local musical culture and the attitude towards music. The good nature and creativity of the Baltic people are the things that I want to pass on to Munich and Germany in whole. And I was personally very inspired by the work of Evilena [Protektore] and Aleksandra [Line] — the way young people can organise events, festivals and create a positive input into the cultural life of the country. Florian also had similar impressions after visiting the Baltic States, and that is why we decided that we need to create something new and special — the «Baltic Breeze» festival».