What happens when a turtle and a squirrel meet?

A conversation about an album full of experiments and S&T Syndicate’s rehearsal nights!

This winter was full of pleasant surprises, brought a lot of joy to those who love jazz music. One of the surprises is from a funk/fusion band called S&T Syndicate with their brand new album «Interaction». I was lucky enough to meet almost all of them at once and talk about the history of the band, life and their album, and I must say that this conversation was far from boring, the same as their music! 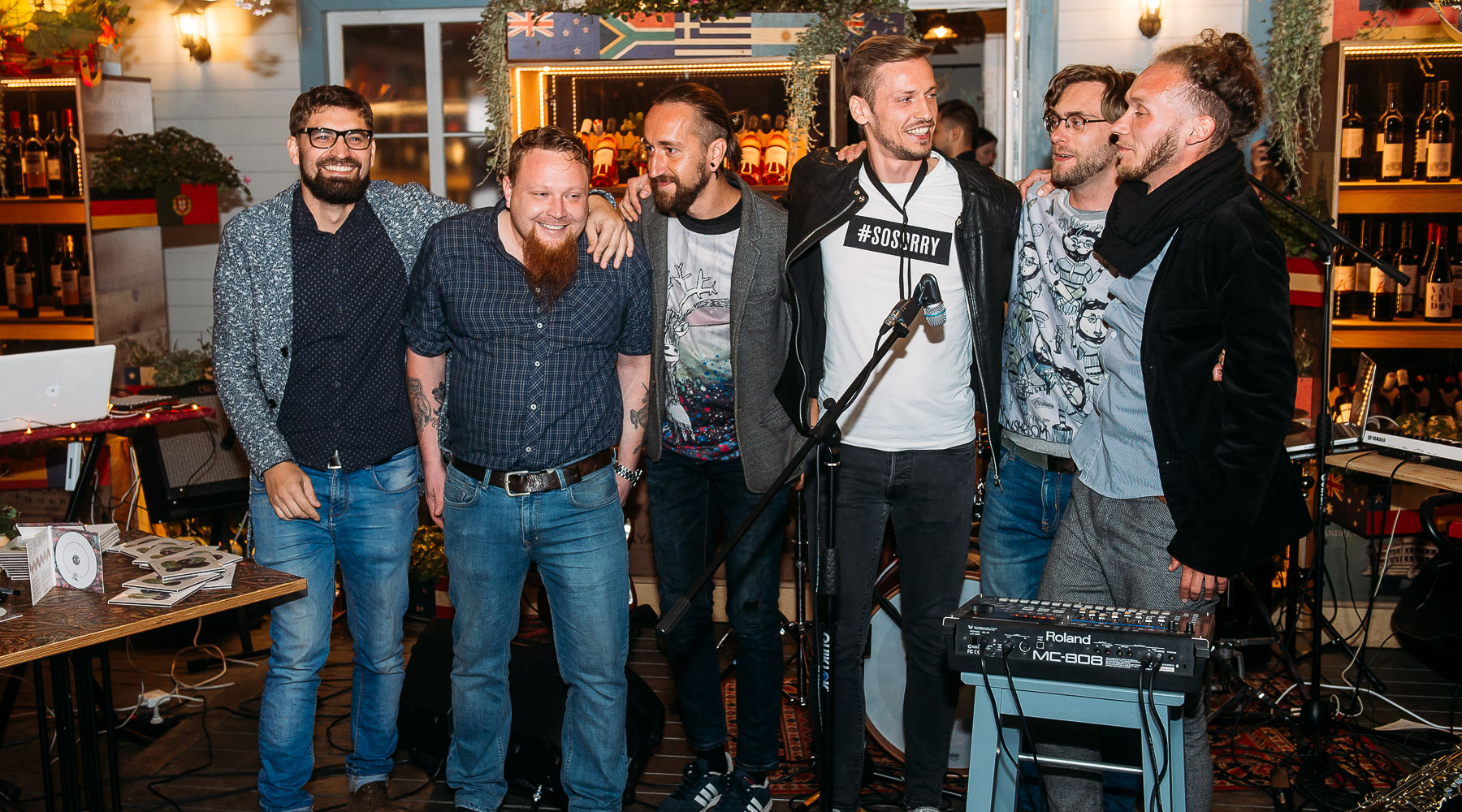 Ok, let’s start with the ancient history! I’ve known about your band for several years now, but the world is yet to be informed, so tell me more — who are you and how was the band born?

Rihards: We are cool guys! The band was formed in recent past, maybe some 10 years ago. At the beginning there were two of us — me and Mārtiņš. We started playing something at my place, in my room where I had drums and a piano. Then Oto joined, he had a PC and we decided to try out something with electronics. For sometime we stayed in a trio. Then there was out first concert…
Mārtiņš: It was during White Nights at AB Dambis!
Rihards: A very beautiful place!
Mārtiņš: It was quite an event, I must say, we didn’t even have our own instruments…
Rihards: Borrowed the keyboards!
Mārtiņš: Rehearsed on a piano that was out of tune… and it all was so intuitive and experimental! After the concert we figured out that it all works well together and it is actually good, we just needed to bring it to another level.
Rihards: Yeah, and then we decided that we need a saxophone and were lucky enough to snatch up Nauris Kolmanis, who is a fantastic musician and a very dear friend. After that we decided that we also need a guitar, because we had that urge to play some rocky stuff as well! That’s how we got Kaspars Balodis and our last but not least band member — Ernests Rasa. With him we got to finally start that fantastic thing — record an album, he participated in that as a guest artist. We recorded that at my place in London and that collaboration was so awesome, that we decided to continue. It’s not the most romantic story though…
Mārtiņš: Everything happened in stages.
Rihards: That’s why we always feel like a newly formed band! With each new member we start from scratch!
Mārtiņš: And this album, we’ve been recording it for 8 years, this material is also divided in stages, it’s like a summary.
Rihards: The music is from different periods, that’s why production took so long, there was so much material, so many tunes, we wanted to move forward faster.
Mārtiņš: It was hard to reject some tunes.
Ernests: Let’s not forget that you (Rihards) were in London for 6 whole years, and when your drummer is in London…
Rihards: Also Nauris has spent the last three years in Berlin, dudes were in Riga, so… But we’re glad that we didn’t give up!

Why the name? Does it mean something?

Rihards: S&T Syndicate? Well, just as I said, we started this whole thing together with Mārtiņš, and we didn’t really know what to call the band.
Mārtiņš: There was something with the word «Syndicate», and his surname is Vāvere (squirrel), and my nickname was Turtle, so we decided that we’re going to be Squirrel’s and Turtle’s Syndicate, me and Rihards, and all others are the syndicate!
Rihards: We had a thought to expand the name, because Kaspars’s surname is Balodis (Pigeon), then it would be Squirrel, Turtle & Pigeon Syndicate.
Mārtiņš: But the name would be too long. 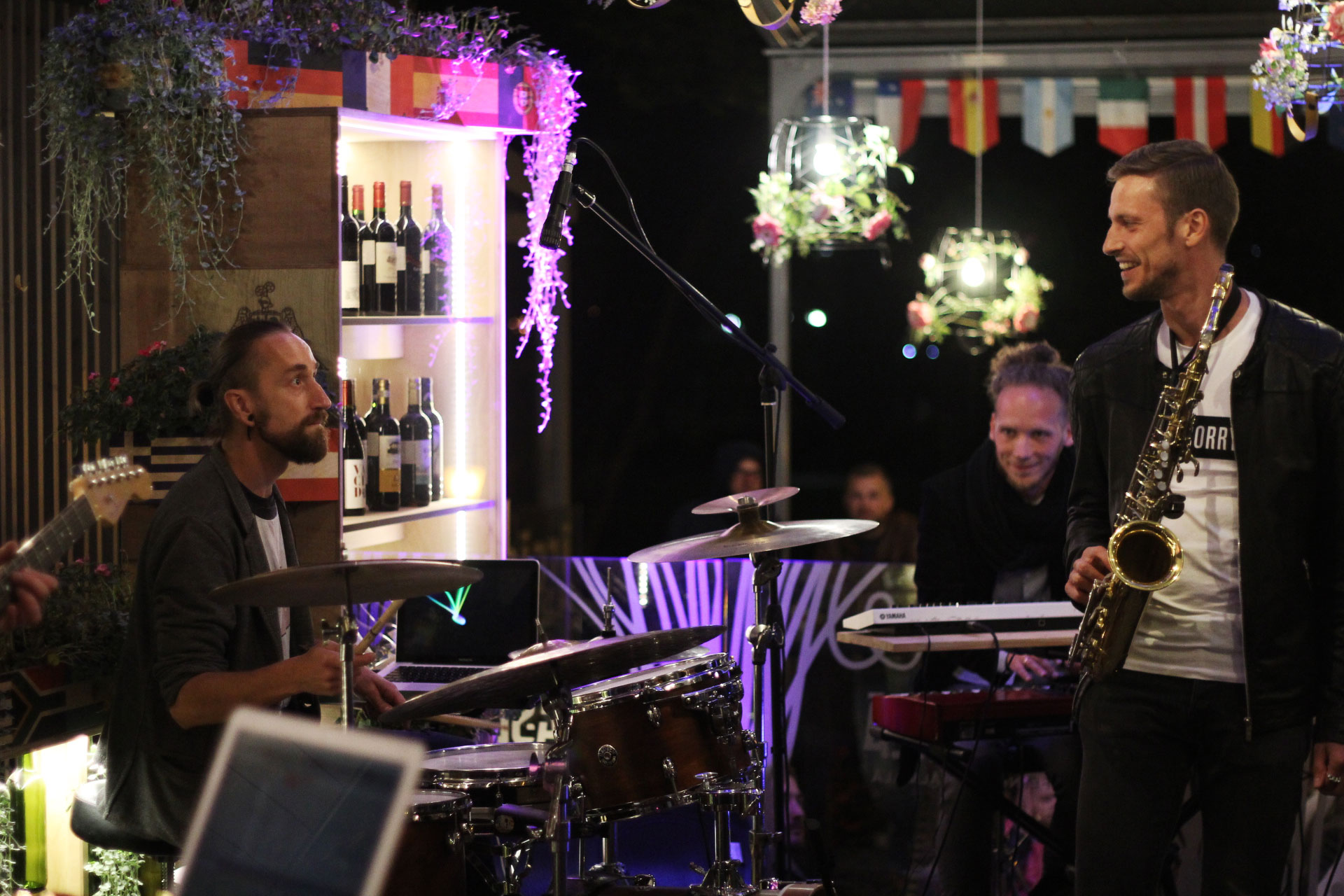 How can you describe your music?

Rihards: We can’t mention only one certain style, we’ve always had problems with that.
Mārtiņš: There’s a lot of improvisation there, so definitely jazz direction.
Rihards: There are several stiles mixed together, but if you really want one word only, it would probably be fusion.
Mārtiņš: The tunes that are included in the album are in the styles of funk, drum’n’bass, ambience, something with dubstep elements.
Rihards: It’s pretty cool that every band member has his own musical interests and those are very different, but there are things that unite all of us, when we do music each gives something from his own background and it all boils together.

How do you compose?

Mārtiņš: In pain.
Rihards: Sufferings! Depression!
Ernests: Tortures!
Mārtiņš: At the beginning we have a motive, it’s being born either from jamming or during rehearsals. Then we work with it.
Rihards: We try looking at it from aside and understand how to structure it and what is going to happen to it next. It’s a work for all of us. Only Ernests comes with some complete scores!
Ernests: And then everything changes!

Let’s finally talk about the album!

Rihards: Yeah, that’s a good one!

Which one word would you use to describe it?

Mārtiņš: It’s all in the name of the album — Interaction.
Rihards: You’ve got a lot of tunes in front of you and that show’s our interaction with each other, with musicians, with different musical backgrounds and characters.
Mārtiņš: Also interaction between tunes and periods.
Nauris: It all was born through a lot of different things blending together.
Rihards: Blending — good job for using this word, it also brings us to our album’s design! We are extremely glad that we had a chance to work with Mārtiņš Zutiņš on that, this painting that is on the cover it is made with real colors mixed together, there is a video on youtube where you can see how it was made.
Mārtiņš: It’s a pretty long process, he mixed these colors for two whole weeks, and filmed everything as well, then he made a video out of it which we used for one of our tunes.
Rihards: He also participated in one of our concerts as a CJ, where he used the same materials.
Rihards: Huge thanks to Mārtiņš Zutis, I like our album’s design as much as I like the album itself! 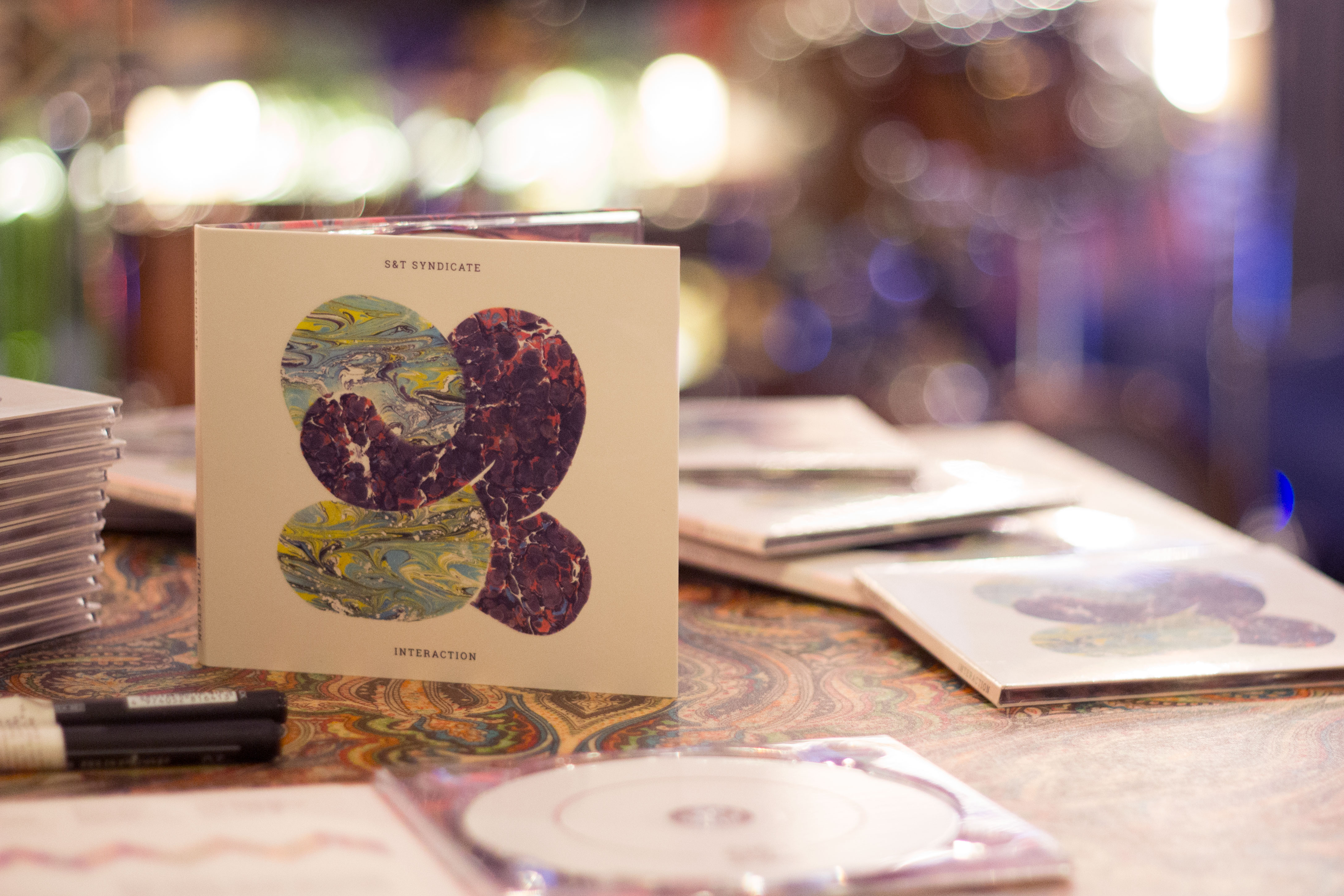 How did you decide on the name of the album?

What is the best way to listen to your album?

Rihards: It’s better not to listen everything at once.
Mārtiņš: You can definitely listen to it while driving, wearing headphones, at home… Even in the evening!
Rihards: Everywhere and in every way possible ant at all times!
Nauris: Better with the subwoofer though!

Someone said that you are heading for an all night rehearsal after our date here? Do you do that often?

Rihards: Not really, but Nauris is going back to Berlin tomorrow and we decided that we can’t let this opportunity slide, so we are going to work on some new stuff all night!
Nauris: This is going to be a very productive night! I live in Berlin for three years already, that city charms me. But we’re trying to not let this slow us down!
Rihards: We’re not trying, we’re doing it!