Toms Lipskis — a road to success is made of nuances

Musician, manager and life enthusiast: a story of double-bass and happiness 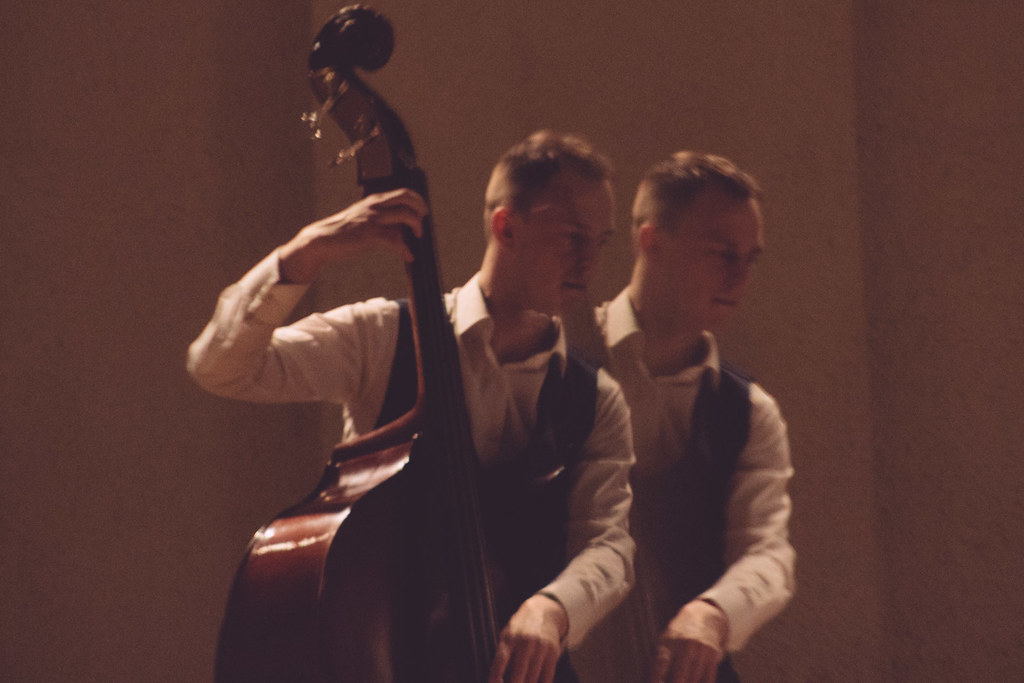 From post folk mandolin to jazz double-bass, from the stagnation of the music education system to progress, from the Voice of America to a broader spectrum: I met a young and promising musician Toms Lipskis to hear, why you have to be in the Trondheim Jazz Orchestra, how sport influences the daily life of a musician, and how important it is to reach for your own stars and feel happy.

We’ve known each other for some time while working together, but speaking of an official introduction: if you could describe yourself in five words, what would they be?

Musician, manager, athlete, enthusiast, ambitionist — by the way, does such a word even exist? (laughs)

So, musician is the first of the five. Speaking of why you’ve chosen to play double-bass — did you want to do it already since childhood?

My first encounter with the double-bass was when I was 13 years old. Together with my post folk group Viteri from back then, which, by the way, is still successfully active, we regularly attended musician camps. We went there to learn all the folk music instruments, and double bass, please, write down — «was among these instruments». As time went on I continued to be part of the post folk scene, at the same time I studied at a secondary music school in the department of music theory. Then in 2008 there were master-classes in Ogre, where you could try out jazz. At the time Janet Lawson came over there to teach American jazz vocals. While I was only interested in double-bass, the only chance was to send me over to the vocalist lessons, so I could play accompaniment for them. There was also the accompanist, piano player Raimonds Petrauskas, who played accompaniment for the vocalists. At the moment when he played his first chords, I was only some two meters away from him, like we’re sitting here right now, and that radiance and push was so strong, that it was clear to me, that I finally found the exact music field, where I wanted to go all the way. Previously I participated in pop music projects, in rock bands, playing bass guitar, studied in-depth musicology, music journalism, I took up jazz piano playing. At that moment I faced a dilemma — what to play, piano or double-bass, but double-bass seemed cooler, more grand.

How would you currently describe the daily life of a jazz musician?

Every day is colorful and very different, and this colorfulness is what I like most about it. It could be described as the opposite of routine.

Speaking of education: you just successfully graduated from Jazeps Vitols Latvian Academy of Music, congratulations! What’s the most important thing you gained from studying?

It was a time that helped me become a better musician — I gained experience in terms of playing music, I was able to overcome trials, step out of my comfort zone, when it was necessary. To be admitted in the Academy was also one of my main goals. Right after graduating from the secondary music school I was not successful in doing that, so I began studying in RPIVA, studied there for a year and then tried again. That was my goal at the time, because I knew that there’s a competitive, creative environment with many great musicians, and I wanted to be there badly. I wanted to play music together with these people, exchange ideas. I was admitted after my second attempt as a result of very intense practice, and it was a very important period of my life.

When did you realize that you also want to educate others?

I think that it’s the same for other musicians — at some point you just receive an academic job offer. I wouldn’t want to state that pedagogy is my main facet, but if you do it, then it has to be done as best as you can. I’ve understood that I like teaching, when I realized that I was becoming more experienced, when I had the knowledge to share and to help the young musicians. If after some time you feel that what you’ve said has resonated with the young musicians and resulted into something — that is the highest emotional achievement possible for an educator.

You’ve once said that you wish to not only teach and invest in the young musicians, but also change some things in the music education system. Which ones?

Oh, changing the music education system sounds too loud and global. Nonetheless, there are some things that have been observed not only by me, but also by other musicians: I’d like a kind of program that would allow the students who have graduated to be more flexible in music, so they would be able to better adapt to different life situations (I’m talking here about academic music). We see many cases when a child has graduated from music school and the only thing he has learned — to play one music piece, not being able to create something new. I think that should be taught since childhood. The later you begin doing that, the longer the person has been in his comfort zone, so it’s harder to change the situation afterwards. I think that currently the situation is already improving — improvisational subjects are starting to be introduced in music schools, although most of them are optional. Things are progressing slowly, but it’s happening, and I believe that a result will come.

At concerts and press announcements you’re usually described as young and promising. When do you think these typical descriptions for musicians are replaced by «famous and well-known»?

That’s probably because I’ve been on the jazz stage for a relatively short time, five years or so. At first you’re introduced as young and promising, and if you’ve done something relevant in five years, played with multiple musicians, recorded albums, received awards — then in five or ten years, when the success has become a common thing, everything can change.

How do sports, as you mentioned in the beginning, fit into your daily life as a musician?

On a hobby level. I pay attention to my physical form, because, as we all know, healthy body has a healthy mind, and it most certainly helps in music. I do physical activities, play basketball, run cross-country — then the body is fit and the cobwebs are blown away. Kristaps Porzingis is my latest inspiration in this regard. :)

If you could travel in time — what destination would you choose?

Knowing that a lot of interesting things, which we haven’t really delved into, have happened in Europe, I would travel to one of the Scandinavian countries — maybe Denmark, Copenhagen. 60ties, 70ties. To see how the language of jazz music, known as the most inherent to Europeans, developed in Europe.

Speaking of Latvia — according to your opinion, in which direction is our jazz music going?

Earlier it was possible to better categorize the crucial factors that influenced the birth and evolution of jazz music. The amount of music records was limited, available for the whole jazz music stage — then Lithuanians were more associated with free, because they were listening to Polish radio stations, Latvians were into American mainstream, because we listened to Voice of America, and the Estonians were into the Scandinavian stuff. Earlier you could categorize it this way, but now the internet has flooded us all with the available information, with music records. Every musician has such extensive freedom that he can listen to what he wants, so right now it’s not possible to categorize some kind of a current direction. There are multiple jazz line-ups, and each of them is developing their own field. There are musicians that go in the experimental direction, but at the same time we have a well-honed tradition, multiple dixieland bands, musicians that play 30ties swing, big bands that play traditional swing, Radio Big Band that plays traditional, modern jazz, many experimental ensembles. Actually you can get confused by how broad the spectrum is.

In your opinion, what does the future hold for our jazz music?

I’ve been abroad a lot, and I can conclude that we have a lot of good, competitive musicians on a European level, many also with great potential, and I’m completely sure that it will be fulfilled. Over time new people will enter the educational system, this field will also evolve or will at least experience a shift, not standing in one place. Taking into account our population count the situation seems very hopeful. All is good and I know that it will be even better.

Speaking of your personal future — where would you like to end up?

Nowadays it’s not that important anymore to live in a particular place, to be able to absorb a certain musical environment, nowadays your location becomes less and less important. I’d like to develop a jazz music movement in Rezekne, but I wouldn’t want to live there as a jazz musician, because there’s simply no jazz music stage. I’d also like to be in Scandinavia, Norway, Trondheim Jazz Orchestra. The line-up of this orchestra is very big and has many different academical music instruments, they play music of a very broad spectrum (specific things recorded in the sheet music, as well as a great freedom to improvise for the musicians). In my opinion, these two components are exceedingly well balanced there, and there’s so many means of musical expression that connect with me as a composer, also as an instrument player and a listener.

What good things can we expect from you in the near future? Maybe another record?

Sure! Currently my goal is to present myself as a musician, a personality in many ways — by organizing concerts, by writing new music, by performing and presenting it. I don’t know when there will be a new record, the current material needs to settle down a bit and calm down. But for all the newest activities going on check out my Facebook page «Toms Lipskis Music».

And now a question I like very much myself: do you currently feel happy?

Yes, I feel happy. Firstly, it’s important to value the global things we have: good health, talents, work capacity. We live in a fantastic place, where there are no wars, where we’re satiated, dressed, we have everything, that’s why I don’t see a reason for not being happy.

Not only to the young ones, but to all the musicians working in their field, I’d like to tell that everything’s possible in life, especially now: there are possibilities to write your own music, to perform, present it, to record albums, to achieve your goals, because current management possibilities are so great, they allow you to reach different musical heights. At certain times you have to step out of your comfort zone. It’s also important to understand that individual growth and path to success is formed by details that need to be taken into account. I wish everyone growth and understanding that growth isn’t default, you have to work on it and never stop at what you’ve already achieved — there’s always something, where you can improve yourself. I wish everyone to live with this conviction.