There will be no cliche ending!

A project by a jazz singer Evilena Protektore and pianist Artjom Sarvi has celebrated the release of their first album «Colors Of Summer». «Jazzatomy» original compositions sound both grand and different, as it should be. «And now you’re going to ask us about how we created the name for the band?» Evilena asks me with a teasing smile, and I answer that I usually don’t ask questions this kind. But this time I’m going to make an exception where certain things lead to the beginnings of an idea. 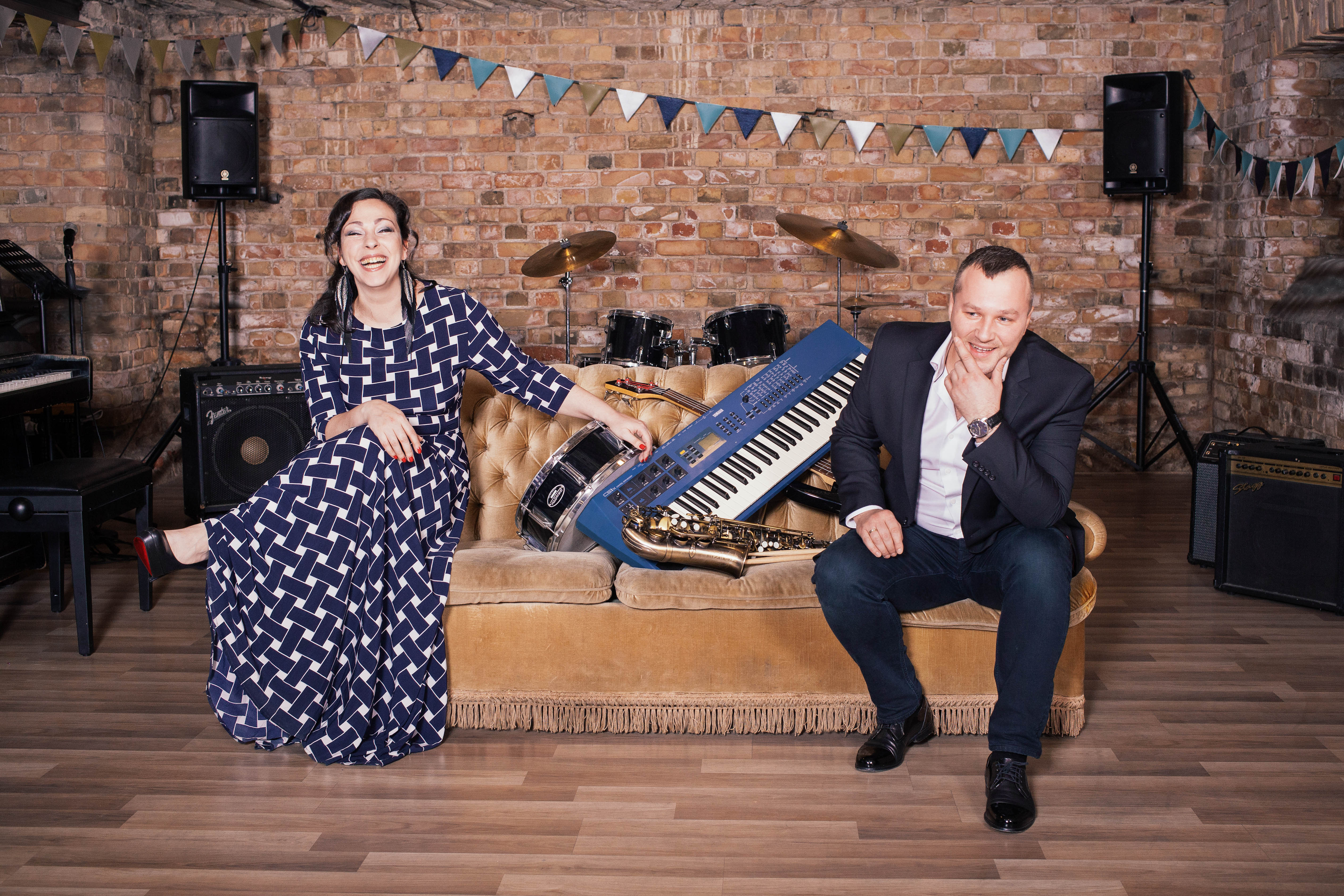 How did you decide to include 13 people into the full lineup of «Jazzatomy»? It’s much easier to arrange a rehearsal for 3, isn’t it?

Evilena Yeah, it’s practically impossible to arrange a rehearsal for 13 people!
Artjoms We have to talk them in to coming… Just kidding.
E. It’s no joke! Seriously! (Both laugh) Artjom call tell more about that one. It was his idea to include 13 people into one band.
A. When we were studying at JVLMA we often played in small combo’s — duo’s, trio’s, quartets, quintets. Of course there were also larger combo setups where we had a lot more people. Also there is also classical music in the Academy, not only jazz, so we decided that we can combine both! You know, it’s really cool when you can play your music with a string quartet or, in an ideal world, with an orchestra. The sound is fantastic — this very thing motivated to make our lineup bigger. Also our joy inspires the listener. It’s very satisfying that we have a string group, horns and also a turntablist that give us this street music vibe. We have managed to combine jazz, classical and pop music in «Jazzatomy»!
E. I can only add that at the beginning I had a couple of tunes that were meant for bigband. The moment me and Artjoms decided that we’re going to form our own band and started arranging tunes I realised, that I would have to cut out some lines from those big band ones, and I really didn’t want to do that. Each musician had his own function and it sounded pretty well together, and cutting out lines meat jeopardizing the mood. Some tunes sound good with a smaller setup, but we still have this one where if a saxophone is left alone without the backup of the other two… He just dissolves in it and it doesn’t sound as groovy as it should.
A. When we play with a full lineup, the listener is able to enjoy the true meaning of the name of our album — «Colors Of Summer» in full. We can deliver our musical message brighter and better! 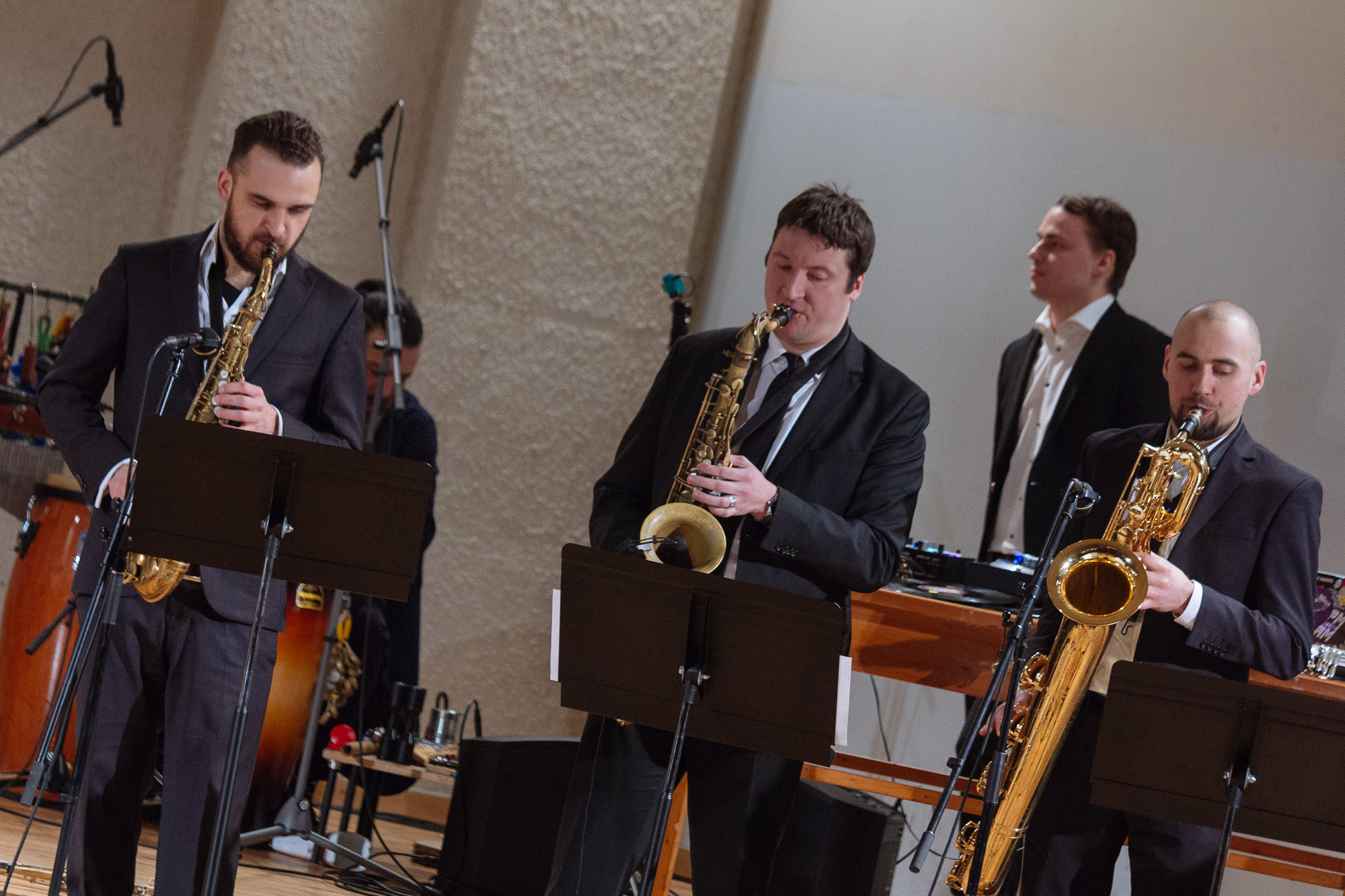 Thanks to the name «Jazzatomy» you don’t have to think about whose name to put first on a record!

E. Ladies first (laughs)! At the beginning we didn’t have a name at all. Our first concert — the presentation of our debut program — was called by our two names.
A. The music came first, than we started thinking about the name of the band.
E. In truth I don’t really remember when we came up with the name or even why?
A. You just sent me an sms — we have to figure out a name for us! We started thinking and came up with «Jazzatomy», decided that it’s the right one! There was another one in Italian.
E. «Fuori»!
A. Yes, «Fuori»! You just came back from Italy. But we decided that «Jazzatomy» is better!

I have spoken to various musicians, in reality the names of the tunes are born within 5 minutes before the album visuals have to be sent to printing. Then something is figured out instead of Nr.1, Nr.2 and Nr.3. If you look at it from the listeners point of view, they often associate the name of the tune with it’s idea, with what you want to say to the world with your music. That’s why the name of the tune or the band is a very important thing for the listener. It leaves an imprint on how they percept the music.

E. Maybe… We didn’t want a traditional thing like, for example, Evilena & Artjom quartet or nonet. The moment you start playing your own music you want this project to be personalised, special.
A. A name makes this project whole.
E. A unique universe. We don’t play these tunes anywhere else, just at «Jazzatomy» concerts.
A. Going back to the names, it was hard for me to name my tunes. It’s impossible to shorten what you’ve felt composing to only two words!
E. It’s because you don’t usually work with texts. The moment you put lyrics to a melody it all becomes more certain. It becomes easier to summarize everything with one word. Herring — it’s the name of the one of Svens Vilson’s tunes. While he was composing, he had a can of herring in front of him!
A. So he visualised the name!

Evilena, is it true that «Jazzatomy» repertoire shows your other unexplored side as a singer — the gentle one?

E. Each project has its own character. I realise that with «Very Cool People» I’ll never sing a gentle ballad, with «Pieneņu Vīns» I doubt I’ll be singing something like «Muse». When I compose tunes I know from the start where it should go. For example, when I composed «Blinded» (way before «Jazzatomy» was born) I took it to «Pieneņu Vīns» and the guys suggested we make a trip hop tune out of it. I realised that this tune is not meant for that band, it’s a jazz waltz after all. Each band’s member has his own musical background and it influence the music. I’m always open to suggestions, but there’s a limit to the amount of changes I’m willing to allow.

A tune is like a baby. You can cut its hair, pierce ears or buy some new pants, but you can’t cut his arm off! That’s why «Blinded» stayed hidden for a couple of years, because I had nowhere to play it. At one point I realised, that the amount of tunes of this nature is increasing. People are not «black & white» in their essence, the same is with arts. You can compose funk, jazz or avantgarde. «Jazzatomy» is a way for me to express my academic side.

A. The thing that I can compose for a big lineup. Before that I mostly played pop music, but I always craved to do something more serious. «Jazzatomy» gave me that opportunity.
E. Gave you this challenge!
A. Yes, but when you write music you don’t think about is as a challenge. You just want to write something really cool for yourself. There’s a huge impact of the Music Academy in that.
E. I can say that there’s a huge impact from one certain person — Uģis Prauliņš.
A. Yeah, it begun with Uģis. Then there was this Lithuanian composer — Linas Rimša. During lectures with those composers we got acquainted with their way of seeing the world and music.
E. Uģis Prauliņš stressed the importance of choosing more interesting musical roads, not the easy ones. He suggested that for each new tune we would choose a new lineup, preferably the one we haven’t worked with before, what would be more interesting to us. For example, a string quartet and a DJ — that setup, I thing, in Latvia is represented only by two musicians — the deceased Nic Gotham with his «NIMO» and symphonic orchestra and DJ Monsta and Laima Jansone on kokle. 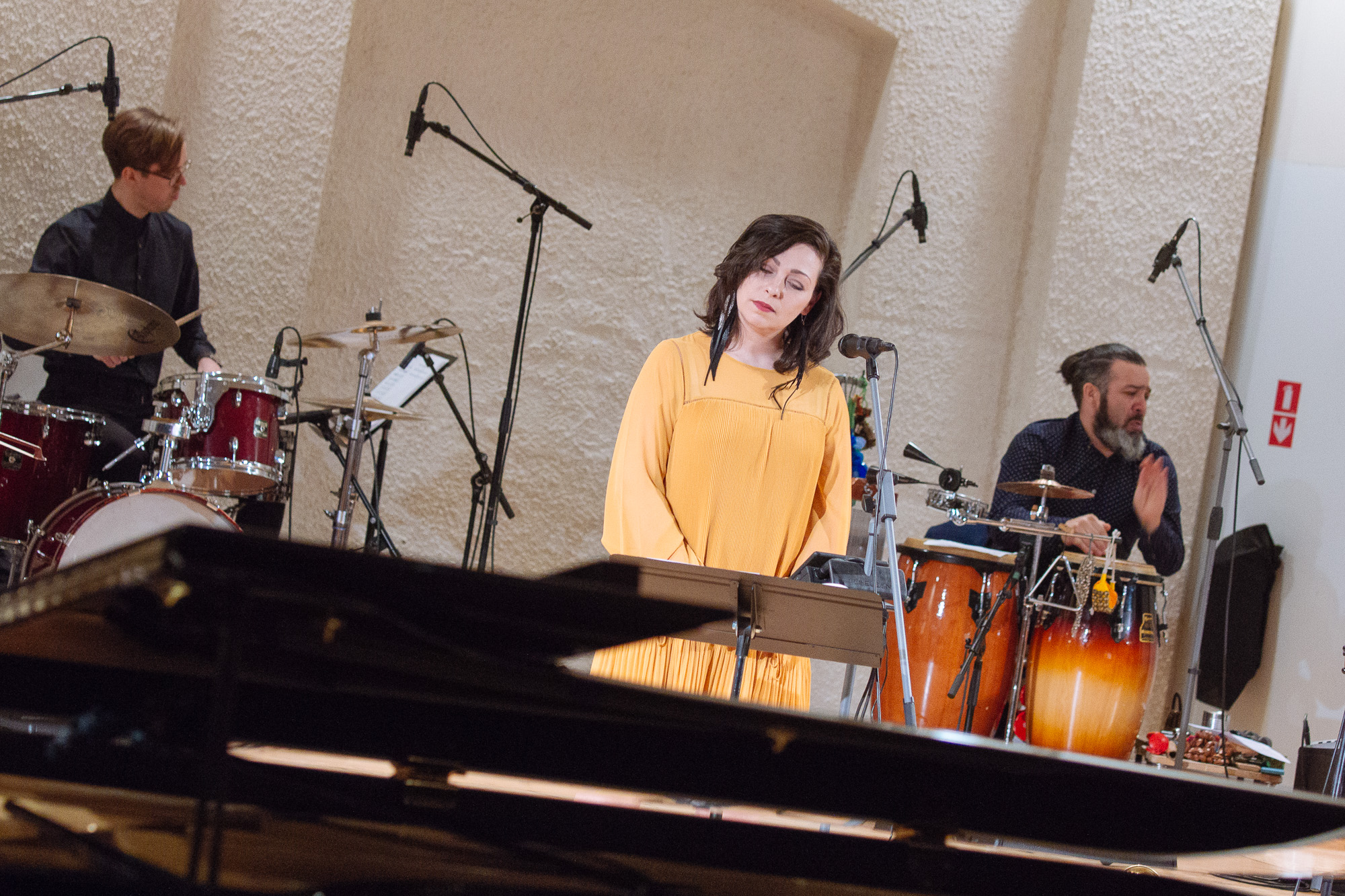 Trio, quartet — do you see it as a comfort zone?

E. Yes, definitely! When you’re in a quartet, each musician’s function is clear as day. We do play differently every time, but there is a certain sequence, order in it. When you have 13 people in a band, in theory you still have the roles and the functions, but a composer can assign different tasks to every musician.
For example our turntablist PM2THEAM has various functions in different tunes. In one he scratches, in another he is more as a sound effect. He has to integrate his work into «Jazzatomy» in his own way, combine it with us and we have to give him some space to express himself as well. In «Blinded» he «turns on» the rain and then «turns it off», in «Latin» he serves a rhythmical function. If you don’t know that there’s a turntablist playing, you would think it’s Miguel’s (percussions) doing. You see how many options there are for a turntablist with his electronics? And at the same time in a band this big you have to know your place perfectly, you have to be very attentive because of everything that is happening around you and there will be no cliche ending!
A. In truth it’s the thing that all musicians secretly desire.
E. But rarely dare to do.
A. All musicians want to find a way out of the ordinary form.
E. All of them want to, but in the end there’s not enough time, they’re tired, or they choose the easy path.
A. I think it’s mostly the lack of time. PM2THEAM was the last one to join the band. There was another DJ that was supposed to play with me at my masters recital, DJ Aspirins, but he was busy. I asked him if he could recommend me someone good, and he did, it was Dima (PM2THEAM). Thank you, Aspirin! If it weren’t for Dima, we would be sounding more classical. Also Miguel (Miguel Andres Hernandez Giraldi) gives that awesome sounding with his percussions.
E. Miguel also sings rap!
A. That’s why our sound is somewhere in between of classical and modern. With «Jazzatomy» we do melodic music. Our goal is not to play avantgarde. 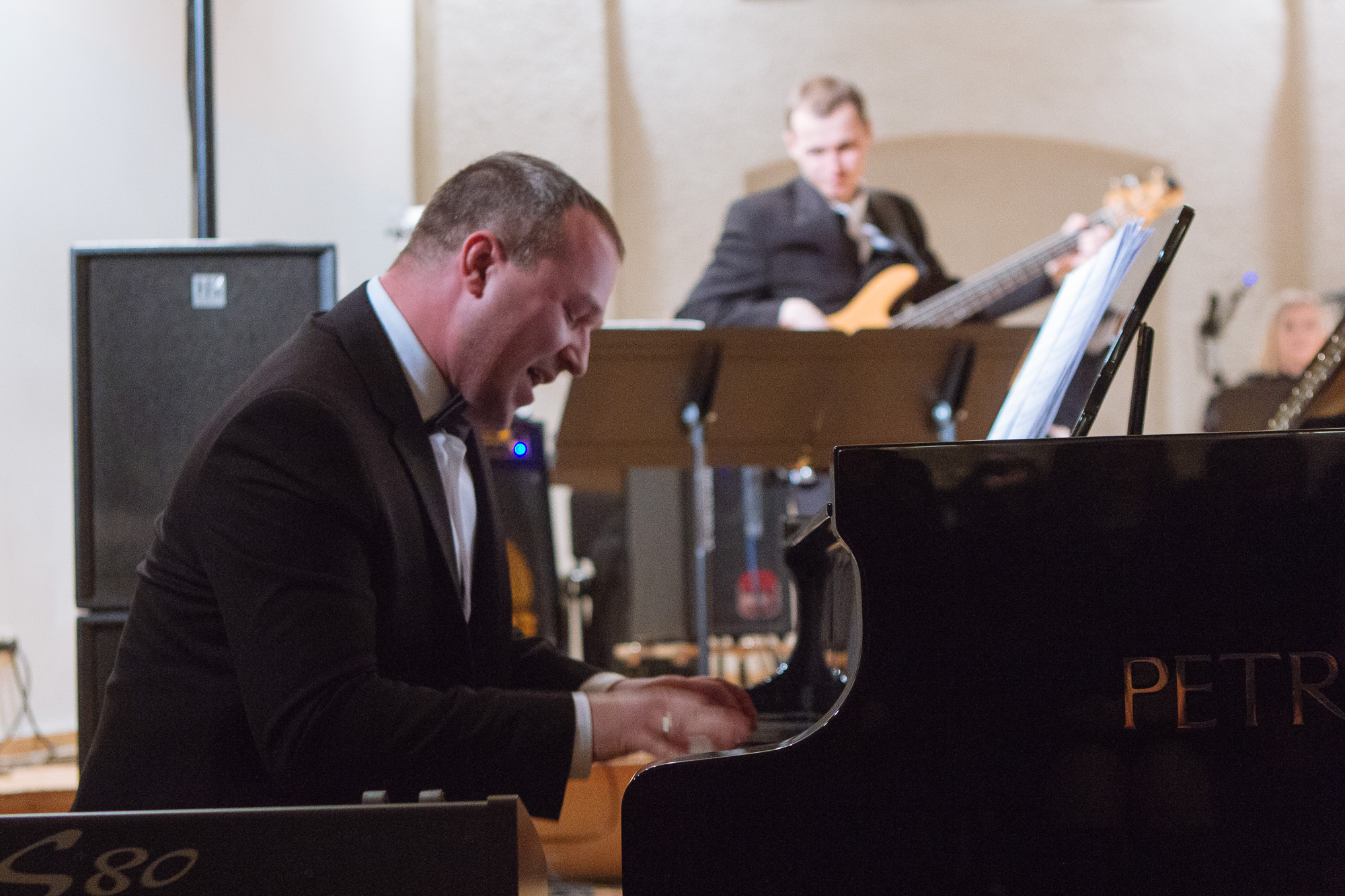 Is there a new «Jazzatomy» album on the way?

A. Yes! We’re working on it!
E. We have decided that there will be half tunes composed by me and half by Artjoms. And maybe one that we did together.

Is composing music a routine process for you? Or you are waiting for the muse to grace with its presence?

E. I can’t think of composing as a job.
A. Maybe we’re not at that age or that experienced yet. For now we have great experience in playing. The more you play popular music, that is known to everyone, the harder it becomes to find your own ideas. That’s why before you start composing you have to play your instrument good, play it out, distract yourself from the routine, then your own ideas will come to you. If composing is your main job, then maybe you can do more. But if you have to divide your attention, the distance between you and your own music grows. In any case you have to find that «golden middle ground». It is a special and cherished thing when you play your own music with your own band. 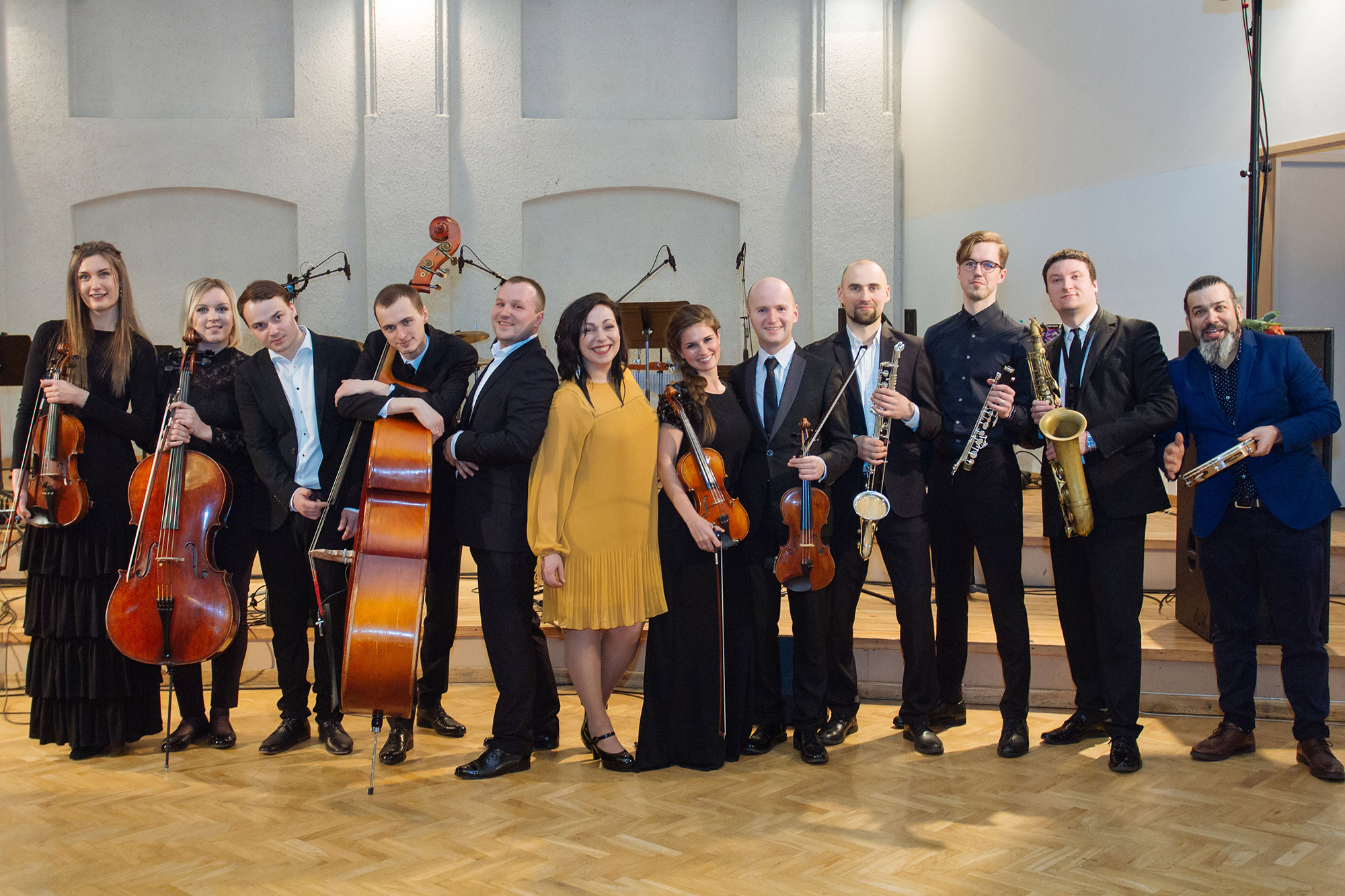