Spontaneousness, vinyl, New York and other plans of a Latvian saxophonist

«If you’re ready to suffer more than the others, you’ll get what you want», or life motto of Toms Rudzinskis

He’s known as a jazz saxophone player, active jam session movement advocate in Latvia and a composer, who released another album in October 2017 with a great international project — in vinyl. We met at a jazz bar/restaurant Trompete to talk about the vinyl’s release, Toms’ new nomadic lifestyle and great musicians around him. «I’m not being serious» — these are the first words of Toms Rudzinskis from our conversation on the voice recorder. To contradict what he said in the beginning Toms continues with seriousness, but also with inspiration. 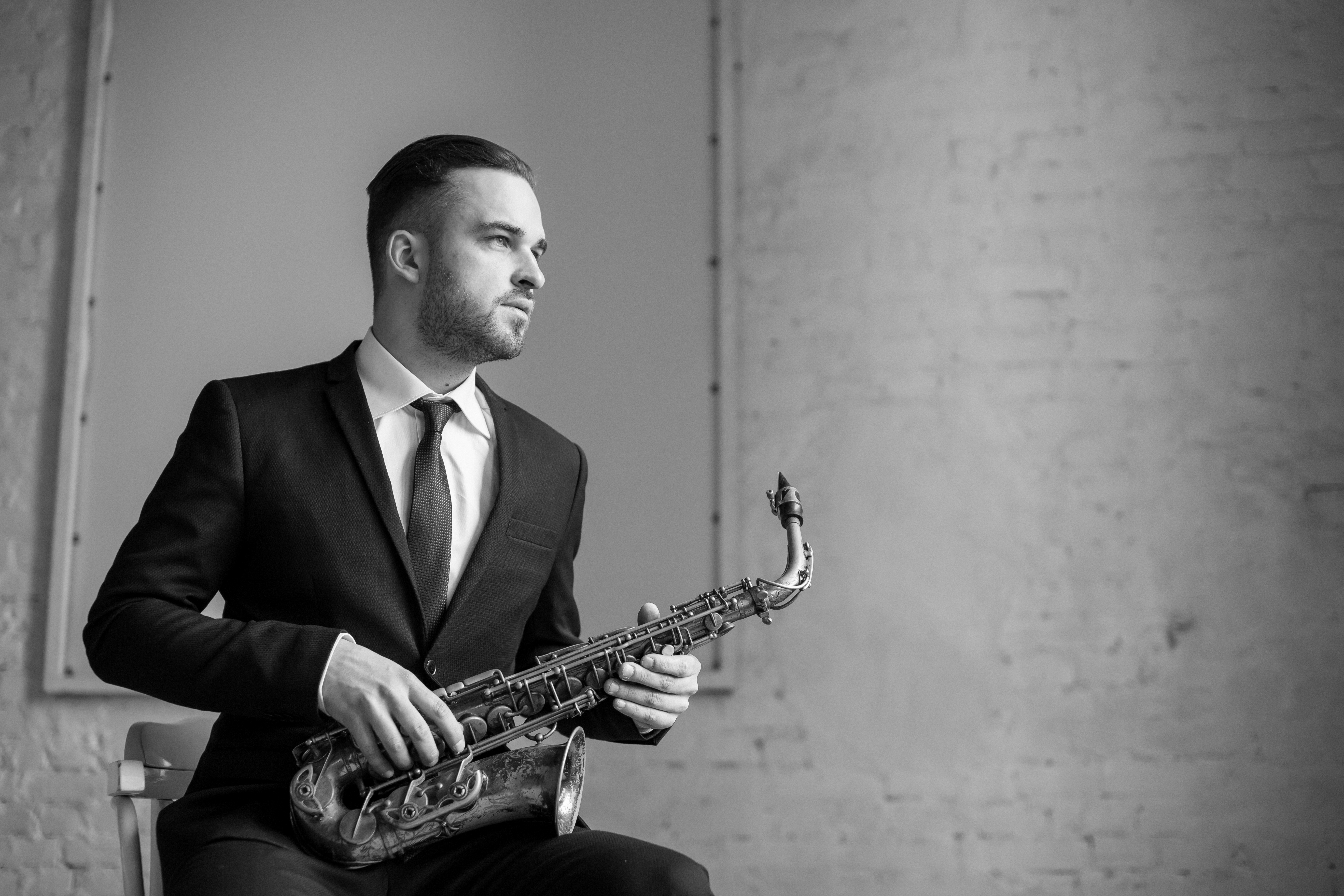 — We recorded an album with Gerhard Ornig, a fantastic European and world class Austrian trumpet player who currently lives in Graz, and with whom we met in Amsterdam. He has recorded a couple of songs also for my album, we have played together multiple times in Latvia, Austria and Amsterdam, we play well together and it seemed that there also needs to be a kind of a real, palpable thing as a result. The thing this time is vinyl, which is absolutely and overall the only music format capable of surviving in this century. Bass on this album is played by Pat Clever, who is British officially, in his heart and mind, he has lived most of his life in France, and we met each other in Amsterdam, where he also lives now. He plays a significant role in this recording, he’s one of the most important parts creating the sound of this album. I’m overjoyed to also play together with the fantastic world class drummer Andris Buikis, and I’m glad that we assembled such a line-up for the recording, and to me the sound is really alive, energetic and spontaneous.

— Speaking of spontaneousness — we recorded everything in one take, there were no edits. We recorded as people did back in the day — we had tapes that cost money, we couldn’t abuse their use, so we had one day in the studio. The material was very complicated. Everything we recorded on that day is also on the record — there’s already some kind of magic in that. I’m happy that there’s this fantastic person in Latvian music — Mareks Ameriks. Firstly, he’s a great person, as well as a first class vinyl DJ and an enterprising young man who has decided to invest into the development of music in Latvia, and he has created a music label called Jersika Records. Currently it’s the only jazz music label in Latvia, although they don’t call it that themselves.

— Mareks phoned me and told that they’re creating a studio, planning to set up tapes there and record something. I had a line-up coming over here, so I phoned him and pitched my idea — these people will be in Latvia, and if you wish, it would be beautiful, if we could record all of this. That was the first deadline for him to finish the studio, get all the equipment and finish the organizational part. The very beginning of all of this was during the Vinyl day event, when Mareks asked me to play with a trio, which was a spontaneous jazz improvisation, and there the first experiment with the tape recording took place.

— As funny as it may sound, oftentimes the music recording industry stumbles against small nuances and details, and that detail which we needed to get over was simple: tapes cost money. That immediately set the tone for everything else. We needed to record everything at once and we had a maximum of two takes for each song. The fact that nothing gets edited was also something new: we could not negotiate that we would play another part again and would add something this time. On the bright side, that gives the recording a fantastic vitality, the listener can really feel like he’s at a concert.

— My business card says musician, saxophonist, educator. A big thing which I contemplate lately is my legacy, it’s what I’m leaving behind after I’m gone. Education is the part that made me think very hard lately — what is my investment to make this world at least a bit of a better place. It’s connected to concerts, culture, I want to help as much people as possible. I want them to succeed, and through their success I also feel inspired. The educational part encompasses everything you leave behind after you’re gone. I want as much people as possible to be involved in the jazz community of Riga and Latvia, and globally as well, to share the happiness, the ideas.

— An important project for me is my quartet, we have performed together multiple times in Latvia: Dominic J. Marshall, Pat Cleaver and Ivars Arutjunjans. We recorded our first album Abra, which came out a couple of years ago, and it was a huge experience for me and it had a big role in my musical development — I could learn a lot from the other band members, and I hope that they also gained something from me. Undoubtedly, an important project is this one, with vinyl and Gerhard Ornig, a good friend of mine, whom I regularly meet in one or another corner of the world with different people who participate in our interplay. An important project and an important friend to me is Daniel Cacija — a fantastic singer, we have a common project called Melos, I’ve written music for it with different poetry, and I hope with a bit of optimism and ambition that soon it will be released. I don’t want to pat myself on the back, but I believe this music is a certain surprise even for ourselves: I put myself in another playing court and I forced myself to think and to write differently. The line-up consists also of Loran Witteveen, a Dutch keyboard player, with whom I’ve had another significant project — for a time I played in his quintet, we participated in the Dutch Jazz competition, a serious event in the Dutch jazz music scene, we toured through the biggest concert halls of the Netherlands, which was a good adventure. In Melos we play with him, also with Kaspars Kurdeko, which I’m sure the readers of jazzin.lv most certainly already know as a phenomenal drummer, and with a great bass player Reinis Ozolins, with whom I had the pleasure of working on a recording for the first time. 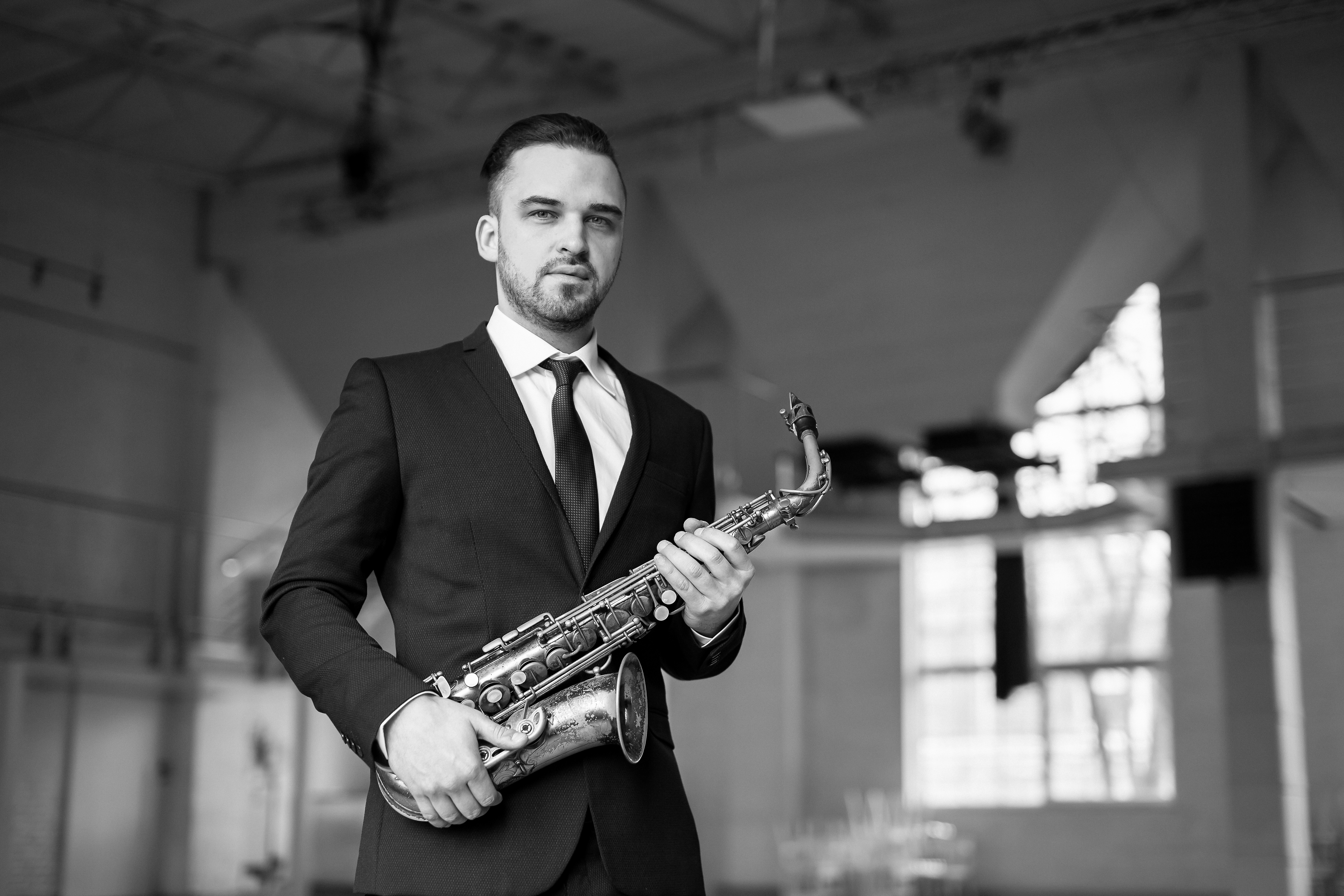 — My plan for the future is to live for some time in New York, which is definitely happening, the gears are already in motion and I’m doing everything possible to be able to do that in a while. New York is a very good place, because there’s no place with a bigger competition, it’s complicated to survive there and sort everything out financially, but it’s a great place with people who do things in a direction which they want to pursue, and you can share your ideas with a lot of people, make collaboration projects. There’s no other place in the world that forces you to do more than New York.

— Now I will be in Berlin, Riga and Liepaja at the same time, and I will try to simultaneously give each of those places a lot of my attention and love, be everywhere for 200%, and I hope that no one will feel left out. I’m glad to also be in Liepaja as of this year, to meet new people, because the jazz scene of Liepaja hasn’t yet been connected to the jazz scene in Riga. Happy to meet the students and pupils who really wish to play, are interested and want more from life, I’m glad that I can be there, and, again without patting myself on the back, it seems that I can invest there enough for it to manifest itself as a real result.

— A precise and masterful playing technique and emotions have to go hand in hand. If we rate it on a scale from 1 to 10, and if the technical skill is 0, unfortunately, we will not hear the emotions. If from 1 to 10 the technique is a 10, and there’s no emotion — then there’s no point to it. There needs to be a combination, it may vary, we can mix it on different levels. Someone is more skilled technically, someone else — emotionally, but there needs to be some kind of balance. I believe that other sax players notice more which lines you play, the audience visiting the concerts more rarely notice the emotional factor more, but basically the technique is just a tool to let us express ourselves as precisely as possible.

— It’s hard to rate your own work, because you mostly don’t see outside of it, you’re involved in the process and you cannot look at the work done from a bird’s perspective. But I do my job with absolute honesty. I’m not trying to fool anyone, and I do everything with a clear conscience. The only thing I can do is offer my music with the same 200%, and I hope that I’m not the only one.

— Regarding the upcoming news, we are waiting for the Melos record very much and hope that it happens soon. It’s hard to tell in detail the things not done yet, but we are working on some material also together with Tuomo Uusitalo, a phenomenal keyboard player living in New York, with whom we’ve played together multiple times. The idea is of a duo album, where we would arrange Latvian and Finnish folk songs, I hope that we will be able to expect this album also very soon. There will certainly be a lot of news from Berlin.

— To the young jazz musicians, who right now are only starting their musical paths, I wish work capacity. Lock yourself (at least mentally) in the music for some 7-10 years and don’t come out. Give everything to music and the result will come. If you are persistent enough and are long enough in one place, if you are ready to suffer longer than the others, you’ll get what you want. I would also wish everyone to get their work ethic straight, to think about it. Come to concerts. Share ideas. I wish everyone to find their own thing and to understand where his skills and strengths lie, and go in with a 200% commitment.