LOCOMOTION! — one of the most anticipated jazz albums of the year

Toms Lipskis talks about brave decisions: the recording of Toms Rudzinskis and Gerhard Ornig in the nowadays unusual vinyl format

The release of this album was anticipated with a big stir, taking into account that it is being released in vinyl format. Contemporary jazz society in Latvia has not made any releases in this format at least for the past 20 years until now. The recording is graced by musicians Toms Rudzinskis, Gerhard Ornig, Andris Buikis and Pat Cleaver, and all of them have proven themselves on the European jazz stage more than once. Knowing the conditions of scoring in the vinyl format, including the limited amount of recording attempts and the very limited post-production possibilities, musicians make a brave decision to demonstrate their mastery without the possibility to retouch imperfections with the help of contemporary technology. All of these musicians are high-class professionals, hence there was not a single doubt that they will brilliantly deal with this task. 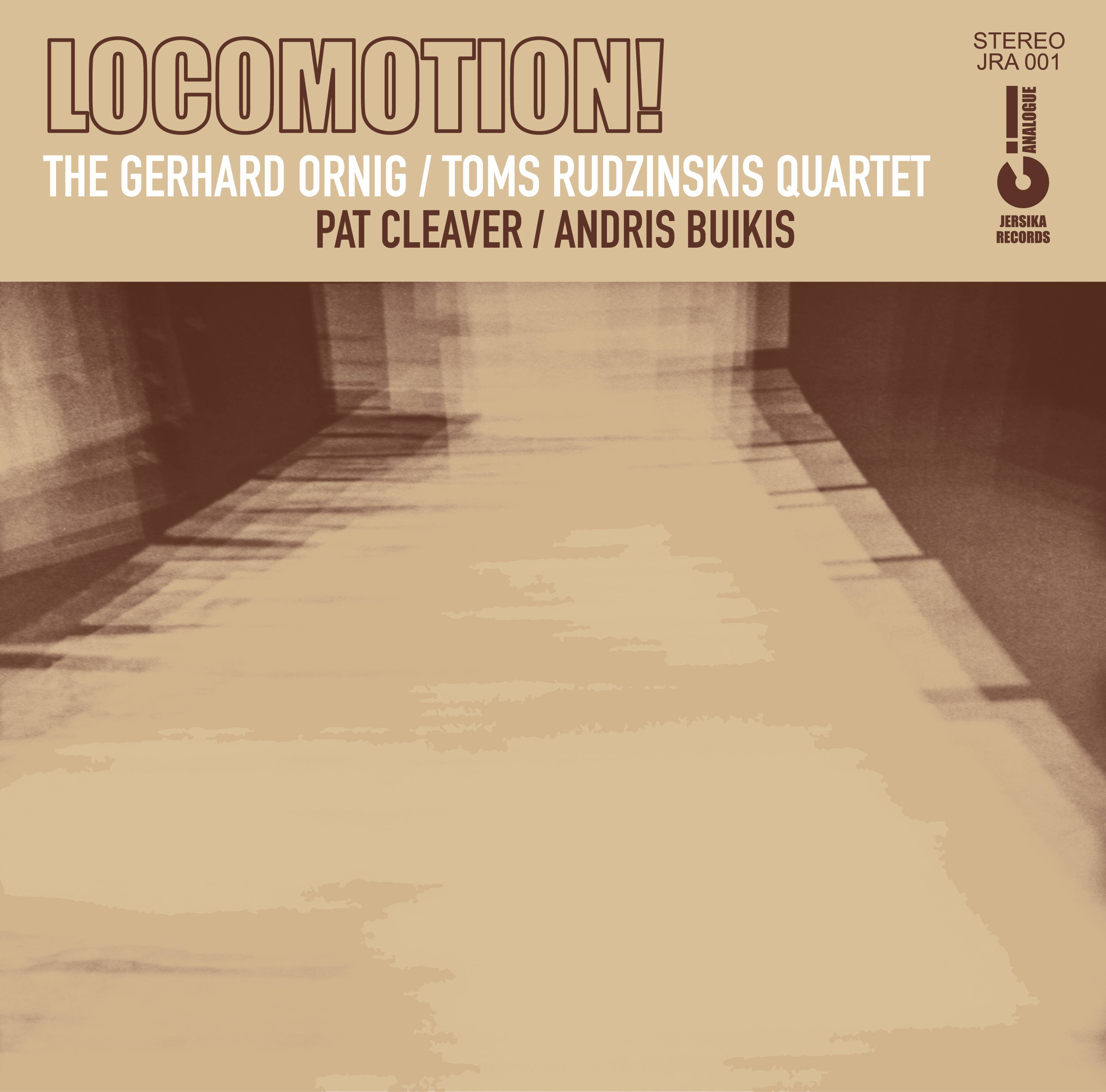 The album is composed of music pieces by Gerhard Ornig and Toms Rudzinskis. So far their pieces heard in other projects have lead to suspect that this time around the musical material might be rather intricate as well, which in light of the conditions of vinyl scoring mentioned previously puts an extra load on the musicians themselves.

The first piece – «Sus» by Gerhard Ornig — in terms of character directly connects with the name of the album «Locomotion!». Wind instruments depict a locomotive starting up, whereas the refined drumming of Andris Buikis creates an expressive groove that helps to convincingly set the course of the locomotive, which with equal intensity and certainty will be kept throughout the whole album.

The piece Clouds by Toms Rudzinskis showcases his signature composition elements to date, like polyrhythm and harmonic diversity. Already during the first notes the interplay between the wind-instruments takes the center stage that this time is not reflected in the usual rhythmic unison duet, but rather in the fact that each has his own function.

There is an element in every piece of the album that takes the part of filling the space in. Gerhard Ornig chose drums for this purpose in his piece «Wols», and at times they seemingly come to the forefront. Overall a very mellow composition where wind-instrument replicas successfully complement each other in a mutual dialogue.

In the beginning of Gerhard’s composition «Siebener.Der.1» the interplay of the rhythm section is highlighted, which is also used in other parts of the album as one of the trump cards of this line-up. The interplay between the double-bass player Pat Cleaver and the drummer Andris Buikis is impeccable, taking into account the individual mastery of each player on a technical level and in terms of sound creation.

In the music piece «Glitch» Toms Rudzinskis has expressed himself as a composer, displaying one of his most intrinsic composer’s features: playful, slightly jerky melodies based on a foundation of groovy compound time signatures. The theme of this piece consists of multiple unexpected moments that previously were not so evident in the creative work of Rudzinskis. However this element is highlighted with the help of the flexible drumming of Andris Buikis that is one of the most vital prerequisites of this music.

Meanwhile Gerhard’s piece «Morsing» begins with the harmonic space being left empty. As the composition begins the bass pedal point element is being layered upon by the atonal phrases played by the wind-instruments. Sometimes it seems that imagining the harmonies is up to the listener himself. But as the piece evolves, the harmony becomes clearer. The solo part is marked by a harmonic plan that at times is not only up to the listener’s, but also to the soloist’s imagination.

The last piece also resembles a locomotive that slowly sets course and takes off, again referencing the album title. Slight gleams of the compositional language of Marius Neset can be heard here, when over the stable groove of the rhythm section the chaconne (a type of ostinato) can be heard in the middle layer of the accompaniment, which, in turn, are layered upon by the melody, and in this case also the solo passage.

When listening to this album, not only the instrumental, but also the compositional interplay between Toms Rudzinskis and Gerhard Ornig can be felt. The compositional language seems quite similar, the pieces complete each other during the whole album. The harmonic diversity of this album also delights the listener, and it can be heard very well in spite of the fact that no harmonic instruments are used in the recordings. Due to this fact the compositional mastery deserves praise, in separate music pieces it lets the harmony come to the forefront using minimal resources, or also shows it with the help of respective melodic lines in the part of each music instrument.

This certainly is one of the most powerful contemporary jazz albums the Latvian jazz scene has to offer. One can only impatiently look forward to what other artistic actions the vinyl publisher Jersika Records will inspire in the currently active jazz musician generation of Latvia.