Traveling in time, place, and sound

«Jersika Records» continues to reconstruct the history of Latvian jazz 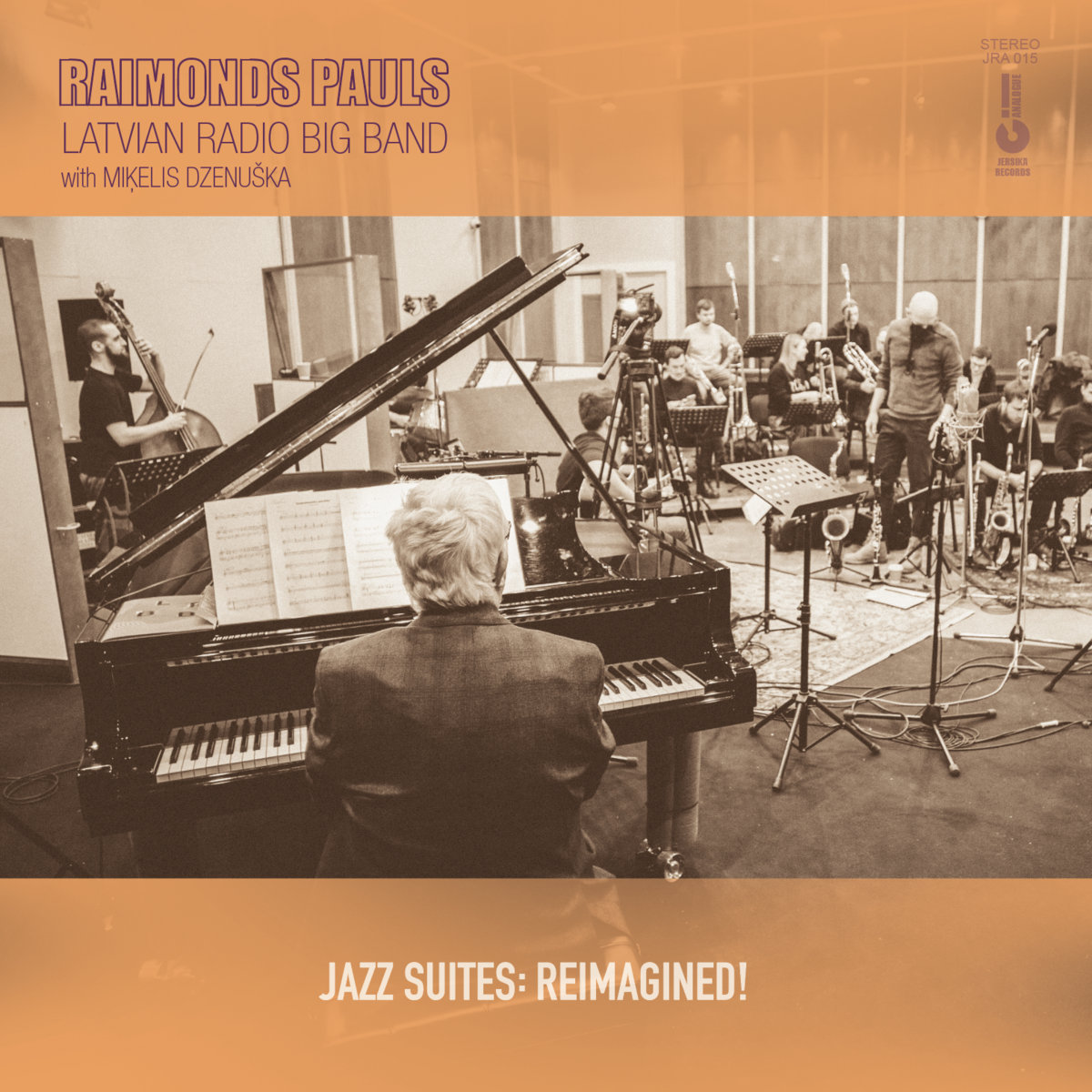 «Jersika Records» publishing house continues to do the projects it already began doing, not only searching for new and current music but also taking care of high-quality recordings of the Latvian music history. One of the new releases is the compilation of instrumental music by Raimonds Pauls, composed in the sixties and performed by the Latvian Radio big band. The recording was done in January of 2021 (a year before it was published) in the Latvian Radio recording studio on historical equipment — Studer C37 tape magnetophone, produced approximately at the same time when the album tracks were composed. This technical equipment stayed at the Riga Sound recording studio at the Reformed church for many years, where the «Melodija» publishing house was operating. The recording process and its quality were curated by Gustavs Ērenpreiss, Augustīns Delle, and Mārtiņš Krastiņš. Just like in the previous albums by «Jersika Records», the sleeve design was done by Edgars Ameriks, based on photos by Oskars Upenieks.

«Jazz Suites: Reimagined!» consists of miniature compositions later arranged for a larger musicians line-up. As the leader of the big band and author of most of the arrangements, Kārlis Vanags says the compositions are based on old sound recordings which were presented to Kārlis Vanags by Raimonds Pauls himself, saying «well, if you make use of it one day…». The compositions were initially recorded by a trio, with a legendary saxophone player Aleksandrs Piščikovs joining from time to time. While creating arrangements, Vanags tried to get closer to a historical sound, using ways of arrangement typical for that time. In one of the tracks, we can hear the arrangement by Vitālijs Dolgovs (one more legendary saxophonist) created many years ago, where Vanags has only adjusted some instrumentation nuances.

The album has a retrospective character — just like the previously released «The Lost Latvian Radio Studio Sessions 1965/1966», this one also has some historical context as its main artistic value. «A» side contains separate parts from the suites «Melnās krāsas» (Black colors), «Kalnu skices» (Mountain sketches), and «Iespaidi» (Impressions). «B» side has a full-length suite «Dienvidu akvareļi» (Southern aquarelles). As a modern listener, one sometimes might think that the music lacks originality or surprise moments, so it’s especially important to keep in mind that this music was written half a century ago! Acknowledging this fact, the music makes the listener perceive it in a completely different manner. And despite everything, this keeps being music, the sound of which is closely associated with the word «jazz» to the biggest part of the audience. The highest respect also goes to musicians who, in spite of different obstacles at that time, nevertheless could get, perceive and understand sound nuances of jazz music and get not too far away from their brothers across the ocean.

The style of playing typical for Raimonds Pauls can be heard here throughout the whole album. Sharp and accentuated staccato can be heard whether there’s a monophonic melody or a dense chord texture. Even though this way of playing dominates, Pauls doesn’t leave the listener without lyrical episodes and a tender approach where the music demands it. The suite «Melnās krāsas» demonstrates the improvisational abilities of Pauls over blues. In the first part of the suite, it happens in a cozy, moderately uptempo swing, while in the fifth part, the tempo is quicker, so a slightly different improvisational approach is used. As a result, an impression of two completely different compositions is left, even though one and the same blues form gets improvised both times. Nice improvisational moments are included in the stylistics of Bossanova («Pavasara noskaņa» / Spring mood») and waltz («Deja» / Dance. It’s especially worth listening to the fifth part of the suites, «Melnās krāsas» and «Dienvidu akvareļi» — one can spot similarities in both compositions. Due to the quick tempo and the other factors, improvisation in these compositions isn’t a simple task, so listening to Pauls’s improvisations here is especially interesting. Melodic lines reach with chromaticism, as well as chord structures that are used during improvisation from time to time, are proof of Pauls being well-informed about music and rich with experience, while the major part of the audience doesn’t associate this with him. The piano can be heard on the forefront (completely alone or with a very ascetic accompaniment) when he plays the main melody in the first part of «Melnās krāsas», as well as the composition «Pie klostera drupām» (At the ruins of the monastery) — another unusual example of Pauls’ music. After listening to this, as well as the aforementioned compositions, I thought about how many musical examples Pauls could create if only he would dedicate more of his time not only to commercially successful music but also realize his potential, creating more niche projects, and developing the usage of contemporary means of expression in his music.

Something special in this album is a broader choice of instrumental timbres — we hear Viktors Ritovs at the Hammond organ, as well as Miķelis Dzenuška at the vibraphone. A successful vibraphone solo episode can be heard in the composition «Nakts» (Night). Vibraphone can also be brightly heard in the composition «Deja» (Dance), performing the main melody as well as the improvisation. However, it can be felt that a quick waltz tempo sometimes makes it challenging to obtain the development of the harmony with the help of the melody bright enough, as the form of the composition demands. In my opinion, a more successful choice for an improvisational composition would be «Pavasarīga noskaņa», that would also better suit the context of the album because, suiting the era and the stylistics, it would remind the listener of the vibraphonist Cal Tjader’s play at the peak of his creative path, during the years when this music was composed by Pauls. Speaking of the tempo and harmonic plan, «Pavasara noskaņa» at this point of Miķelis’ musical development would also be a more suitable material. It would also make sense if at least a minimal solo episode would be played by the organ.

This recording shows almost all actual jazz music subgenres of the time when this album was composed. We can hear blues (1st part of «Melnās krāsas») and ballad («Nakts»), light Latin American music elements in «Džungļu taka» and some bossanova in «Pavasara noskaņa» and «Skumja dziesma». This recording offers quick tempos and dynamic intensity (5th part of«Melnās krāsas» and «Viesuļa vētrā») and a little bit of dance genres (quick waltz in «Deja»), reaching a more experimental chamber music sound («Pie klostera drupām»). The opening composition is «Instrumentu parāde» (Instrument parade), based on short, multiplied melodies and also known by an alternative name «Orķestranti» (Orchestra musicians). The album is a great guide that helps us turn slightly dusty, not yet fully discovered pages of Latvian jazz history. Thanks to the «Jersika Records» team for a qualitative recording of this music — it was definitely worth it!