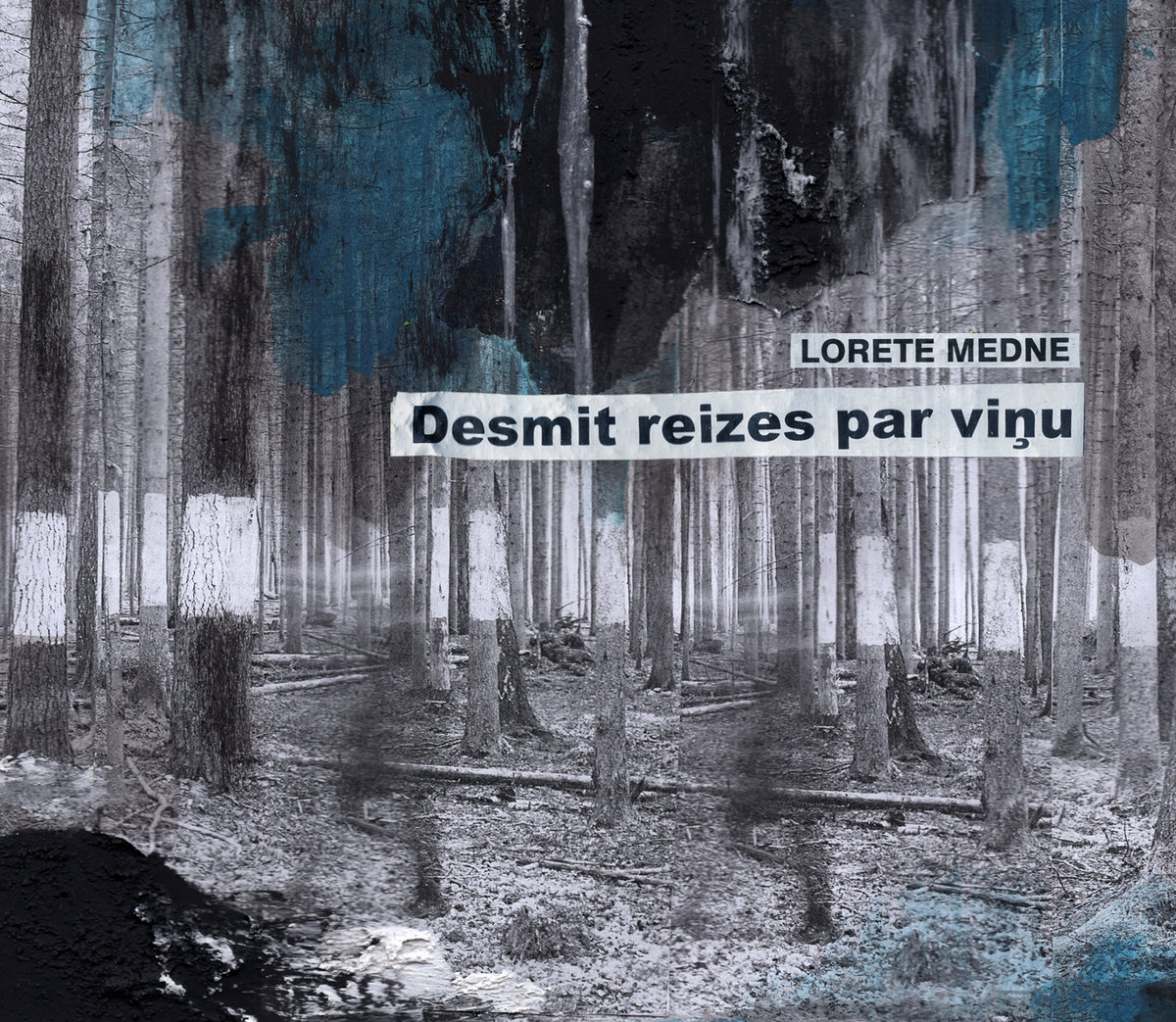 Shortly before New Year’s eve, the singer Lorete Medne’s debut album «Desmit reizes par viņu» (Ten times about her) was out. As the name says, the album contains ten original compositions in Latvian. The material was created slowly, and the recordings were finished quite some time before they were published. The songs were composed from 2011 to 2017, and in 2019 one of the album’s compositions, «Pabūt divatā» (To be together), was released. Here Lorete Medne gets joined by Artis Orubs at the drums, Kristians Priekulis on the bass, and Ritvars Garoza on the keyboard, and the listener can hear acoustic piano, synthesizer, and accordion timbres. In addition, thee musicians get joined by guest artists Artūrs Gailis (alto), Jānis Ivuškāns (trumpet), and Artūrs Hrustaļovs (trombone). Sound recording and its post-production were done by Gatis Zaķis. The album design with a photo of Jānis Brauns was done by the artist Renāte Kloviņa.

In spite of the fact that this is her debut album, Lorete Medne has been well-known among the musicians for quite some time. She has collaborated with many musicians like Jānis Šipkevics and Aija Vītoliņa. She gained her experience while performing at corporate events, as well as bars and restaurants, playing jazz standard repertoire. Furthermore, she has been collaborating with the pianist Ritvars Garoza and bass guitarist Edgars Galzons for quite some time. Within this line-up, the artist has made her first steps in composing her own songs — first of all in English, later in Latvian.

The album has not only retrospective but also autobiographical character. The author of the songs states that the compositions are based on true events. The images and thematics are based on some specific situations and the range of emotions that were experienced and felt through. The composer remembers places and situations which evoked the song’s creation — while driving her car, drinking tea, being in nature, or hiking around. After paying closer attention to the names of the compositions, I can see that there’s some certain logic in them. Many composition names contain pronouns «they», «us», «her», «you», as well as «whom». The name of the album «Desmit reizes par viņu» (Ten times about her) doesn’t unequivocally state if the author speaks about herself or someone else. In one of the interviews, Lorete Medne says she’s done this on purpose because the name of the album, «Ten times about someone else», sounded less personal, while the usage of pronouns leaves wide options for interpretation and makes the listener think whom the story can be about.

While listening to this album, it quickly becomes clear that the lyrics are the key element for all compositions. Lyrics are rich with content and dense with details. The goal of the author to share the information and tell the story can be felt well enough. This isn’t a case where the syllables and lyrics are artificially found just to create rhymes. It’s clear that the music depends on the text, not the other way around. From the rhythmic point of view, especially interesting are the moments where the meter of the composition has been changed to make the text closer to the rhythm that is naturally created while pronouncing it. The syllables don’t get artificially shortened or prolonged to adjust them to the melody. Speaking of the form, one can hear how the songs get divided into verses and refrains, although while listening to the music, the whole structure doesn’t seem too prospective.

It’s pretty challenging to put Lorete Medne’s music in any frames of the genre. The album consists of three to five-minute-long compositions accompanied by the rhythm section. In the recordings, we can hear a masterful, although ascetic playing around with production effects; this material, first of all, gets associated with belonging to a pop music field. Although as soon as we hear intriguing rhythm patterns, as well as piano improvisations by Ritvars Garoza, we understand that we’ve already swum in the jazz music waters.

The listening experience begins with the song «They». First, a quite expanded instrumental introduction can be heard, less than a minute long. Artfully drifting between seven and six fourths, the melodically harmonic material prepares the listener and creates a sense of what can follow next. An ingeniously composed verse with a jazzy harmony sequence «II — V — I» and «4 over 3» polyrhythm gets followed by a light and danceable refrain. After we hear the verse and the refrain for three times, there’s the next stage which, while dynamics gradually rises, becomes more and more intense. After the piano improvisation, there’s the dynamics decrease until the moment when the image created by the musicians vanishes and transforms into a silent, ghostly vibrating timbre, creating a bridge to the next song — «Viņa» (She). Here we can understand that the first and the second tracks are like two parts of the same composition, and it’s advised to listen to them one after another without pauses.

«Viņa», just the same as the previous composition, begins with an instrumental intro. A non-squared structure of melody (which, by the way, creates a seven), along with a three-part meter, creates an odd aesthetics, probably even typical for Imants Kalniņš music (while listening to the introduction, I have associations with the song «Viņi dejoja vienu vasaru» in my mind). After a verse and refrain that replace each other for two times, the next thematic material follows, and it doesn’t repeat anymore. After a short piano solo episode conclusion follows with an unusual timbral effect that reminds me of rubbing.

«Kurš?» (Who?) is a verse and a refrain that differ from each other not only with a text but with a meter as well — the verse consists of two parts while the refrain — of three. As I’ve previously mentioned, these structural changes in the rhythm aren’t unexpected and are a significant element of the song’s contents. The song concludes with an ambient and slightly aleatoric episode where the word «pacenties» (try) that the vocalist sings gets looped — it gets repeated in different timbres while in the very final, we hear the sound of falling grains that also continues in the following song\ s introduction — «Viņš» (He). Just as the previous two songs, the third and the fourth tracks of the album are connected.

«Viņš» is a waltz based on a four-chord harmony. Lyrical and storytelling melodies of both verses and refrains are easily perceived. This composition also has a text as the primary source of the content. This song could very well fit into a theater play or musical. Principles of dramaturgy can be seen not only in the text but also in the usage of the means of musical expression. After the verse and the refrain get changed three times (in the middle, there’s an instrumental episode instead of the refrain), minor harmony and sad feeling get changed by the major, introducing the sense of hope and light. In the end, the four-chord harmony, interweaving the whole composition, gets modified. Over it, some toying around with the Latvian lyrics takes place. While changing the word order, each time the meaning of the sentence changes, however, it still remains the same in the context of the whole story, creating an odd game of words.

«Tikai tu pats» (Only you yourself) is one of the most pop-like songs, corresponding to the radio format. This is a happily major story addressing the listener, less than four-minute-long. The song is special because it addresses the listener directly without any mediums. This isn’t a story about «them» or «her» — the one who listens gets addressed as «you». While the musical material develops, brass instrument timbres appear in the accompaniment, and with their stylized fanfares woven into the musical fabrics, they add a festive mood to the music. This composition can be considered a light culmination of the whole album.

My hit in this album is the seventh track — «Kā koku galotnes pie saules tiecas» (As the treetops reach the sun). From the point of view of the composition, this is an excellent example of successfully using musical means of expression. I also want to pay attention to the harmony plan, especially in the refrain of the chord sequences, which in turn appear in minor and major. The choice of sharp tonalities (A major) most probably isn’t accidental, too. After a bridge in the middle of the composition (the musical material that appears in the song just once and contrasts with the verse and refrain), the refrain gets enriched with the backs sung by the vocalist, which signifies low seventh and low sixth, adding an exotic color to A major. This and similar episodes open the door to one of the parallel worlds to the listeners with sharp hearing and let them experience catharsis. Even though everything is created as in a textbook here, the song sounds absolutely fresh, and there’s a wish to listen to it more and more. Interestingly, this song’s refrains are the only episodes of the whole album where the voice vocalizes the letter «a» instead of singing words. We don’t hear it anywhere else in the album.

The song «Pabūt divatā» (To be together) is the culmination of the whole album. Bass drum accompaniment that resembles heartbeats is an effective illustrative element throughout the entire composition that, together with a soft, organ-like synthesizer timbre, and an almost whispering voice, points out in the theme of the album — longing and deep revelation of feelings. As a bright episode of all this monotonous meditative flow, there’s an instrumental part in the middle of the composition, where the melody first resembles the bell ringing on the synthesizer, and afterward the string timbre gets to the forefront.

«Citā krastā» (On the other shore) is an interaction between two contrasting musical images. The first of them is illustrated with an energetic groove in five-fourths that switches to the sixths from time to time. The second is absolutely airy and rhythmically free. By the way, these are almost the only episodes in the whole album without any constant rhythmic frame, so the drums can rest for a bit. At the end of the song, there’s a questioning chord along with a supple melodic line played by the synthesizer.

The song «Mēs» (Us) begins with a waltz-like duo of the voice and the piano that later, with the drums’ backbeat joining, evolves until an expanded piano improvisation episode that can be called the jazziest part of the whole album. Just like the song «Pabūt divatā», here we can hear the alto violin timbre as well. In the end, we can hear bright chords followed by an extended rumbled outro which also serves as a bridge to the following composition.

The last piece, «Laiks nemierīgs» (Restless time), has a special stylistic mood. In the drums part, we can hear a triangle, while the harmonic instrument (piano) plays accompaniment characteristic for the schlager music based on eighths, which in the end evolves into a crazy sound, typical for the Balkan orchestra, with an accordion, metal wind instruments and a pretty ethnic violin (alto in this case), switching to the simplest four-fourths pop music beat from time to time.

All the way through this recording, special energy of Lorete Medne is heard just so well, along with her aura and the world of her images. The compositions are very eclectic — they can begin with one mood and style and end somewhere else. At the same time, there’s no feeling that something is too much in this album. Differentiating the means of expression wasn’t selfish here. Instead, it naturally demonstrates the high professionalism and experience of the musicians. All that’s left is to congratulate the artist on her unquestionably successful debut!