The free interplay in the free space 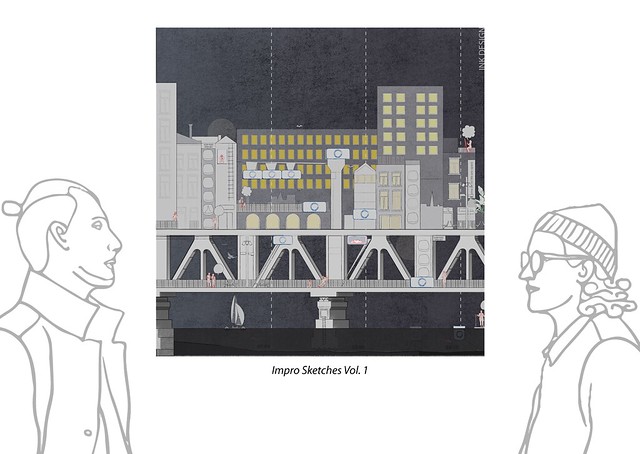 Jazz studies abroad is a great chance to make new collaborations. This is even one of the logical side effects, just like the album «Impro Sketches Vol. 1». It connected the Latvian trumpet player Kristians Kalva and German pianist Simon Gelsdorf. And it happened in Hague, the Netherlands, and can be heard digitally throughout the world.

Both students of the jazz departments of the Royal Conservatoire The Hague met there in the recording space of the school that is primarily dedicated to the sound recording students. If there’s an exceptionally equipped and obviously quite available studio near the lecture and rehearsal rooms, it’s really tempting to use it wisely.

And this exactly is what Kristians and Simon did. Right after a couple of singles were recorded last year and the year before that, they’ve dedicated more time to record a full debut album and let themselves flow freely without previously prepared note sheets or a tracklist. The result is mostly ambient, unhurried jazz music that’s borderline classical. And the reason for that is the fact that both musicians have studied classical music both at their own secondary schools.

This nuance uniting them quite clearly explains the ability of them both to connect within improvisation that steps into a classical genre with one foot from time to time. Kristians often uses a flugelhorn that sings along with the piano without cutting the usual independence-demanding trumpet sounds into the recording microphone. Taking into consideration that the Latvian representative in The Hague is studying knowledge and skills needed for the leading orchestra trumpet player, as well as already has played together with several large ensembles including the Latvian Radio big band and international «Jong Metropole Orkest», this ability to adjust to the specific format of the moment is really great. The compositions go along with a slightly flirting easiness and even a smile, which can be especially heard in the balladic composition «A Hot Chocolate», which could be easily pictured being played by some Elton John in another arrangement during a large stadium concert.

And if we mention big names, the only composition that refers to one of them is «To Brad», which concludes the album. Brac is no other than Mehldau. So a world-known American jazz pianist, which makes a listener think that this composition is inspired by Simon. Kristians joins him unobtrusively but finely, letting his colleague show what he has to say.

The interplay of both musicians in the whole album is unbelievably mutually respectful and, at the same time, tight, which turns almost all of the improvised and not too long sketches into unusual compositions, fully complete with only a trumpet and a piano duo. Hence improvised, they could even be played once again — most probably, this is going to happen if only the pandemic and other external circumstances let musicians meet outside the school walls and the borders of the Netherlands.

Meanwhile, all we are left with is to enjoy this fixation of the moment of life which doesn’t lack emotions, even though in the beginning, they seem pretty reserved. However, getting a little bit accustomed to the exquisite handwriting of both duo members, quite specific nuances can be found out. For example, when you realize that «Road Rage» is even quite a dancingly groovy composition, leaping out of the rest, that makes the listener remember even the legendary syncopes of Dave Brubeck.

The main mood of «Impro Sketches Vol. 1» is indeed way calmer and not irritating; some compositions are demanding to dust a little bit more in the studio jazzily. However, the album’s concept this time is quite strong, and the musicians make it all happen. Probably the concept would only benefit if the «Interlude» with the piano fugue would be left there in the studio because it stands out from the whole more or less jazzy background, although it, of course, brings its way of colorfulness to the whole story.

The album lacks a bit more brave sketches like, for example, «Nephophobia», the most extended composition of the album, which is unexpectedly progressive in the middle, flying further from the Earth’s surface with a wider note trajectory.
Another composition, «Tittle Tattle at the Dinner Table», seems a little bit odd in this whole concept which could probably fit a comedy show of the National theater better. Even along with the whole «Pie dzintara jūras» motif in the middle part. Simon, the colleague of Kristians, could probably object that the motif is taken from the German seamen schlager «Fahr mich in die Ferne, mein blonder Matrose», also known as «Am Golf von Biskaya»…

Despite some side slips that were mentioned here, the album is live and quite saturated, even taking into consideration the minimal instrument line-up. Works like this prove that jazz is live music, after all. The more alive it is, the better. And it will always have room for free improvisation, musical jokes, and exquisite technical capacity. If this is «Vol. 1», I’ll be waiting for «Vol. 2» with great interest.