In the forest of synthetic sounds

Synergies between the nature and silicone-made timbres 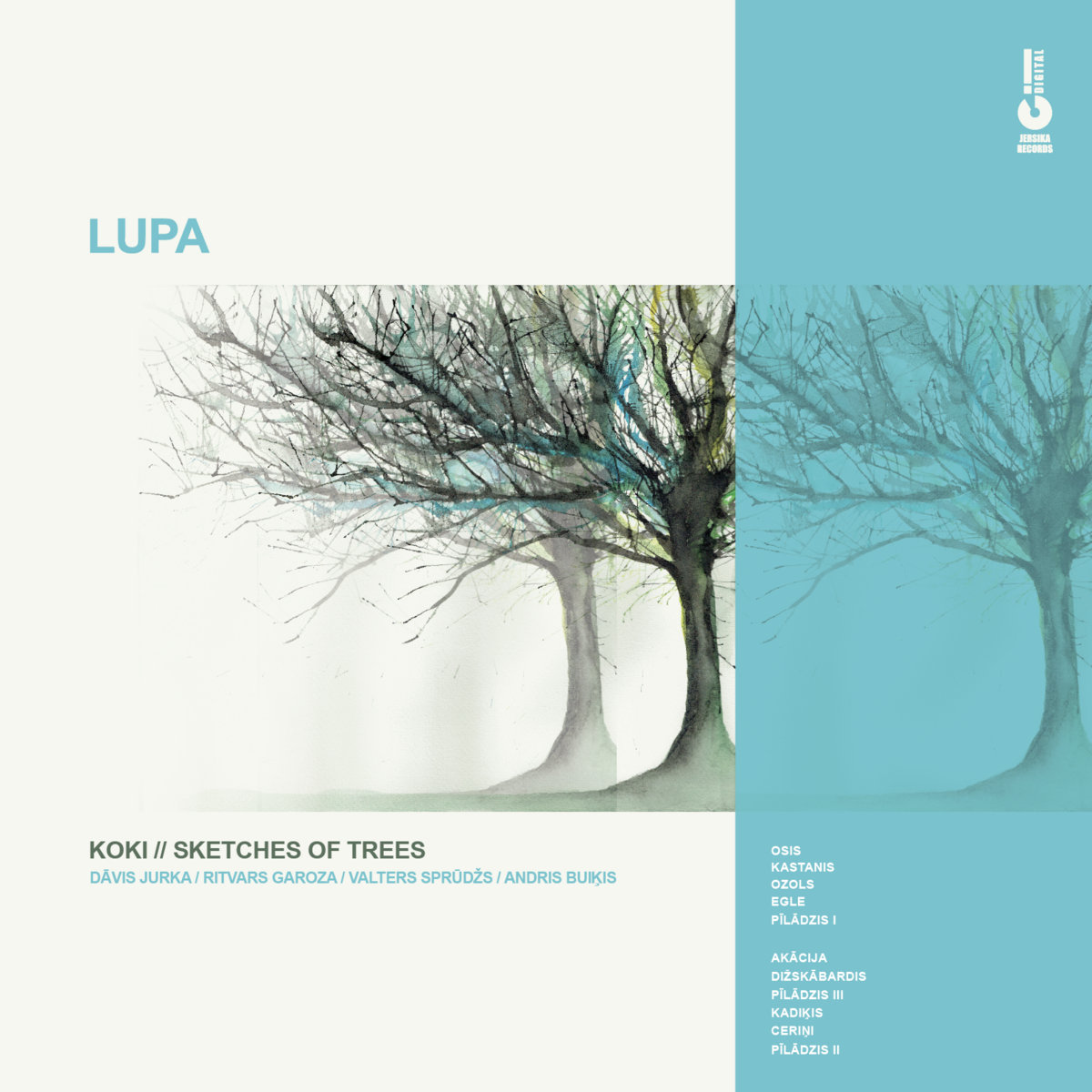 Latvian neo-fusion band “Lupa” has released its second studio album, “Sketches of Trees”. Just as the album name states, each composition depicts a tree. So my task was not only being a music critic but also a dendrologist to be able to find some parallels between the intense electronic sound palette of the band and the three types that are the names of the compositions.

To bring the reader more joy – drink a shot every time you read the word “synthesized” or “synthesizer”.

Comparing this one to the first album of the band “Sequences and Consequences”, from the very first composition here can be heard the proper handwriting of the band – album compositions make a dense jungle of electronic and synthesized sounds, beginning with a rich synthesized tone kitchen of Ritvars Garoza, up to an alto saxophone tone of Dāvis Jurka, which has, in my opinion, found a better balance between its natural timbre and effect mixture this time. The compositions are united mainly by a heavy, a little industrial sound palette and melancholically sentimental motives that sound both nostalgic and modern at the same time. So the compositions themselves and the compositional language are greatly inspired by contemporary fusion jazz music, for example, “Kneebody”, which was one of the major quotes when I was discussing this album. At the same time, separate elements and synthesizer sounds made me quote the Latvian animation classics “Fantadroms”, where synthesizer tones were dominating, typical for the eighties and nineties. The whole impression makes a wicked and unique listening process that brings the listener to the past and the future simultaneously.

Here and there, a bit lighter motifs and playful melodies arise, which seemingly perceive each other a little bit frivolously, creating a soft contrast to a mostly melancholic majority of the compositions. The most colorful example is a single that was released in the middle of the summer of 2021 – a composition “Akācija” (Acacia) that could as well be the Latvian version of the “Benny Hill” theme. Despite a minor central motif, the composition features a naughty delirium, accompanied by “Lupa”, which is playing around the forest and playing their instruments in turns. This isn’t only my imagination speaking, but a scenario of the music video for “Akācija” indeed. So here’s my first dendrological observation. After a little research, it looks like acacia is a naughty but beautiful tree that grows both thorns and flowers while arbitrarily and quickly reproduces. Well, the composition suits that one. This seems the only different piece compared to the rest of the album, which, as I’ve already mentioned, mostly contains darker colors. “Akācija” is a composition that seems too short. So I’m going to listen to it again and again.

Further on, the album’s introduction is “Osis” (Ash tree), one of the most extended album compositions that shows the listener the powerful synergy and rich sounds of the quartet. The band’s backbone is an erudite and explosive percussion play by Andris Buiķis and electronically massive bass lines of Valters Sprūdžs, which the synthesizer sound palette plays around along with expressive saxophone solos. Driving parallels with a tree with a powerful roots system with many branches, the band’s interplay justifies this attribute with dense textures; on top of this, the solos develop. Just as the ash tree asks for some light, the band “Lupa” demands the listener’s full attention in this opening piece to dive into the unique flow of timbres and textures of the band. The composition culminates in a powerful crescendo, and it seems that the big band’s brass section is involved. While the musicians swirl around like a boiled high-pressure pot that is almost ready to explode, the composition stops with a silent click typical for old television kits and a cathode ray disappearing on the screen.

The next tree in the forest is a chestnut. Not knowing much about the trees, many know a chestnut, the fruit of which in autumn covers pavements and roads. This composition made me instantly think of my recent past when I was listening to the album called “Anti Hero” by “Kneebody”, which was regularly decorated by a hard rock accompaniment texture with intensive and full of energy motives on top. Rhythmic modulation after a dense and heavy introduction (like a “Drum Battle”) refers to a comparison I’ve mentioned before. Only here does modulation serve as a texture thinning instead of thickening. Without further searching for comparisons, I’d like to say that this composition is my second favorite. The main theme with its obstinate motive stays in my ears, although I’d like the band to return or make a reference to the initial motive while working on this piece. The composition flows out in a saxophone solo, accompanied by a supple and modal harmony with a beginning or end that’s hard to define, creating a wicked non-gravitational atmosphere.

Definitely, the most melancholic one here is “Ozols” (Oak-tree). That’s a tree loved by people – just like a symbol of power; this valuable wood is also one of the most well-known in our culture. Just like some bitter melancholy, this composition bears a bunch of melancholic timbres that, together with a layered accompaniment, bring the listener to a missing home or warmth. The echo of synthetic snare drums resembles waves hitting a rocky moat; the theme ends with a sobbing synthesizer solo emphasizing the heavy mood of the composition, full of fate. It seems that a stiff, powerful oak tree is pictured in the middle of a harsh winter here. The culmination of the solo returns with the second motif and pulsating texture with a bright solo as an accompaniment.

“Egle” (Pine) is a meditative pleasure that opens with a stingy bass motif, echoing in sharp upper tones, covered with synthetic percussions. Just like a stoic pine tree, this composition presents itself with a calm sound and melody that speaks about unbending any obstacles throughout all seasons. When I was studying this album, I often found myself guessing if the melody is a product of brass or key instrument because the tone it offered can be both a synthesized EWI sound or a keyboard sound cocktail. Maybe that’s a part of the listening magic, too, the one that denies the ear to classify sound sources in any conventional categories. The meditative “Egle” can be the new hit of SPA relaxation complexes, the usual cyclic audio mess of which ironically creates more stress than calmness to my ears.

A snack-long, three-part “Pīlādzis” (Rowan) refreshes the palette of the remaining compositions in the middle / after which its parts are positioned. An experimental jump unites all three parts into avant-garde, the main role of which is taken by short motives, harsh sound textures, and non-quantifiable, explosive rhythms. When looking at the list of compositions, it’s clear that the parts of “Pīlādzis” aren’t placed consecutively. Maybe that’s a comment on a rowan as a tree or a way to avert the listener’s attention from the fact that the album actually contains nine instead of eleven compositions. However, when looking at the whole album, I, of course, see that essence of these short compositions that layer the second half of the album in similar proportions.

“Dižskabārdis” (Beech) is a composition that follows the less serious “Akācija” and brings us back to a darker sound. Besides the ostinated bass line almost throughout the whole composition that echoes in the piano accompaniment from time to time, the composition is characterized by a non-typical, less electronic sound. Phrygian and minor motives dominate in this composition. As the piece goes closer to the end, sound patterns thicken, turning into astral echoes sounding together with the main motive, accompanied by a more conventional piano key sound. Here I, as a dendrologist with a few hours of experience, also feel difficulties with speaking about the relations between a tree and the music.

Right after “Pīlādzis” goes “Kadiķis” (Juniper). Here “Lupa” goes further into experimental sound fields, the flickering synthesizer accompaniment becomes the main substrate of the composition, and synergies of the band members develop on top of this canvas. Here the adventurous drum play by Buiķis mostly dominates, constantly being situated in between a cadence similar to a machine gun and an explosive wave of cymbals. Although almost every band member gets a solo, the composition is mainly created to bring drums into the spotlight. I’m not complaining, of course! Energetically this also is the highest culmination point of the album. Although I fancy the intensive moments more than the other ones, this one didn’t have so many ear-worm motives that mostly sounded in the first part of the album. A prickly juniper bush seems a nice image for this energetic piece.

So we’ve reached the last full-scale composition, “Ceriņi” (Lilac), and the listener gets invited to participate in this bright and aromatic fold of tree flowers. Although the composition contains a darker mood, already typical for the band, its upper part has a light flute timbre, accompanied by which, along with the spring and the flow of the composition, also summer, the first flowers bloom out of the flower buds. As the summer goes on, the highest point is the brass instrument crescendo, with a dark bass and saxophone ostinato joining him slowly, which seemingly proves that a windy and chilly autumn is to come. Further on, winter comes around with its uncomfortable cold and naked tree branches and dim and pale sound textures. In the outro of the composition, suddenly the bright and spring motive returns, and at its ending, something is left unsaid, and we’re right in front of it, in March of 2022.

The band “Lupa” in this album has found the common denominator of its sound and, along with it, its unique handwriting, which, in my opinion, is the most important in every creative area. “Lupa” is a unique band not only on the small Latvian stage but also on the bigger jazz music market. Quite dynamic music environment in the world weeds out musicians and bands that aren’t bright and unique enough. The wide availability of music has brought the listener to the point when it’s really rare to hear something unheard before. The album has much to dive into, and it offers to enjoy one of the best Latvian instrumentalist works.