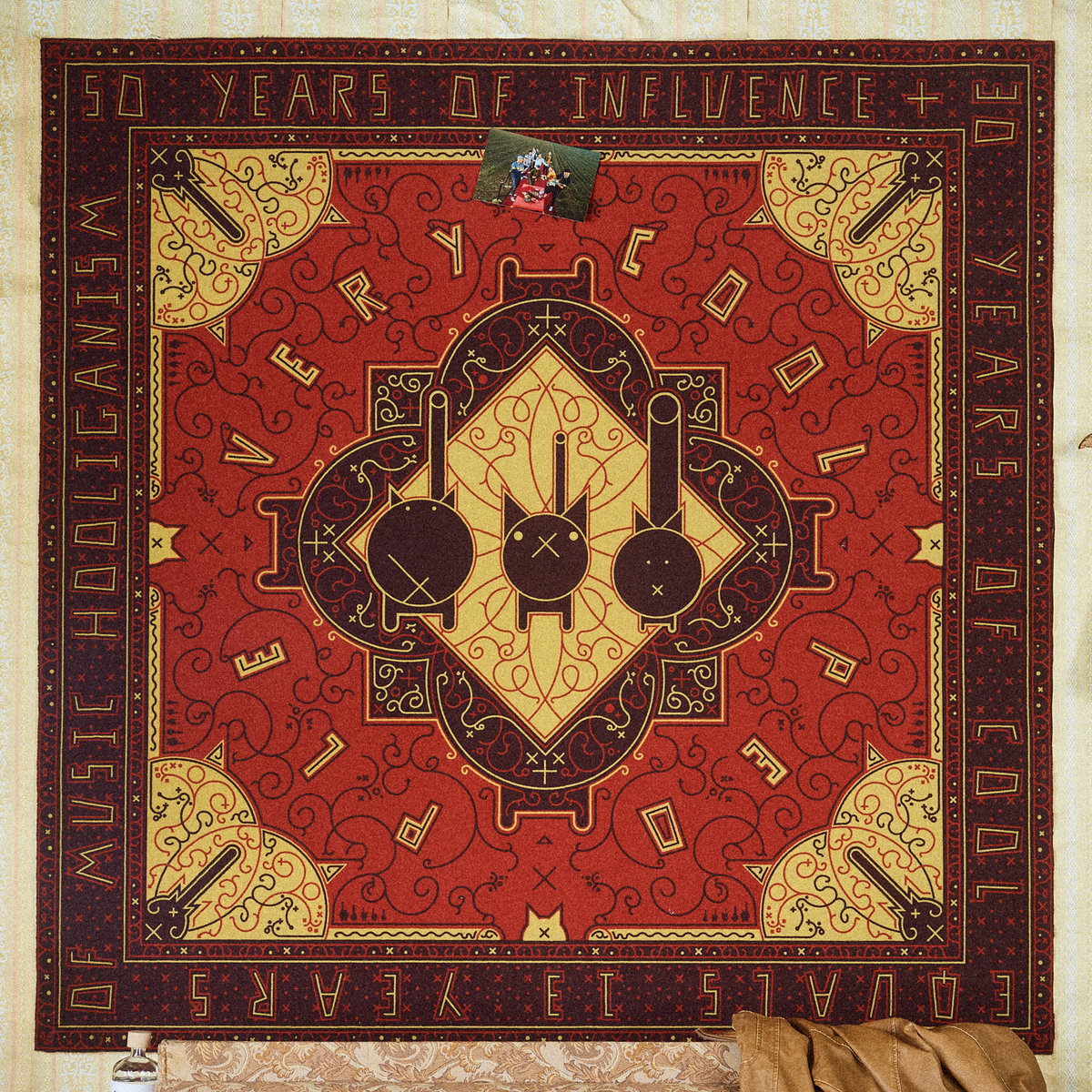 The High Energy band “Very Cool People”’s new album is a showcase of the groups’ ability to bind Funk, Jazz, Rock, Traditional Klezmer, and many other styles together effortlessly, all while keeping the party going with driving rhythms, memorable melodies, and complex yet fun compositions.

The album entitled “50 years on Influence +30 Years of Cool Equals 13 Years Of Music Hooliganism” starts out with the track “Rapid Dough/Pelmjaski”. Powerful horn lines and hypnotizing driving bass and drum grooves kicks off the album. Setting the tone with a strong danceable yet very interesting track. The song later moves into more complex harmonies. Feeling more like a fusion band but not straying too far from the elements of a party at all times. The track will later break into a refreshing yet haunting horn melody, smoothly transitioning to a creative synth solo. Impressively setting the high energy-cleverly arranged tone of the album.

“Deep Fried” is Track 2 and sets up a disco feel mixed with a fusion-like melody. The fantastic horn arrangements are reminiscent of a small classical brass section finding its way into a modern dance club. As the whole band is used brilliantly to create an original style and sound. Revealing that the album’s true intent is to have you dancing to the strong beat provided by their rhythm section.

The Album continues with the next song, “Camarade Emigrante”, being a more traditional Latin Jazz Track. With again a very danceable groove and melody later going into an authentic and well-executed trumpet solo. And ending with a blazing percussion solo to finish off the piece with a bang.

Track 4 “Thirty Fourth Festival” with a busy bass line that provides a forward motion that pushes the song forward and maintains the festive atmosphere of the project and showcases the band’s baritone Saxophonist’s skills, иeing another upbeat and infectious track.

“Renegade” starts off with a much needed brief lowering of energy in a well-written brass introduction but quickly breaks into a klezmer party jam. A fun and creative track with a playful organ solo, and the band burst into a chorus of singing that steps the fun of this song up one more level before ending with an executed arrangement.

Getting into track 6, “Alone in Biksti”, is like wandering into a soundtrack recording to an old spaghetti western or surf moving as the unique and infectious groove, and solos from the guitar and tenor sax make this track a good time. “Zillins Maz” is another klezmer style song with a well-played melody but launches into a more funk or fusion bridge that catches you off guard in the best way possible. They decide to play a more funk-based groove for the Tenor Sax solo done with effects that takes you far away from the klezmer vibe only to seamlessly bring you back to the original theme.

Beginning with a very high-energy rock intro with hard-hitting brass leading the way, “Around the Harvest” is another very nicely composed song that weaves in and out of hard rock and more mellow feelings. The choice of the trombone solo over the rock riffs is interesting but one I found to be a perfect fit for this band’s style. Later on, the track will morph into some unexpected harmonies that are again a pleasant surprise.

“Ierindnieks” is more traditional. The horn section really shows off their skills here with great phrasing ensemble playing, even adding a flute to the mix. But as in most of their other previous songs, they break into soulful harmonies, and well placed horn stabs that really catch you off guard. And before you are too comfortable, they are back to the march with ease, making for a fun listening experience.

Track 10, entitled “Arnolds”, starts out with the most clearly dance/funk inspired grooves and harmonies of the album thus far. It has a very energetic party vibe with tight funky horn lines and just a hint of klezmer before breaking into a ski/klezmer high powered outro. This track displays the band’s ability to provide the listener a chance to move away from the more aggressive party energy to a more “old school” funk experience that really works well as a supporting piece to the overall project.

Rounding out the album are tracks: “Plostnieks/Ej Morjak”, “Oskar”, “Yellow Bride”, and “Get-Together Old Chums”. “Plostnieks” features a vibrant horn section intro with a soulful trombone solo, then moves into a mysterious yet funky melody over a surf party groove. Highly funk based groove, and solid interludes grow the track’s intensity that keeps you moving and never a dull moment.

“Oskar” keeps the party going, beginning with distorted guitar taking over and brass interring with traditional klezmer-sounding melodies. Probably the most straight forward hardcore, and passionate rock track on the project.

“Yellow Bride” keeps the party going with its high-intensity groove and traditional roots once again shining throughout the piece. Additional modern harmonization and well-thought-out composing and arranging take this song to what would otherwise be simply a fun party track to the next level. Finding the perfect balance for a danceable yet musically interesting song.

And finally, “Get-Together of Old Chums” ends the album on a light but hard-swinging composition that also contains elements of surf and klezmer music and horn lines reminiscent of the rock band “Chicago” or funk legends “Tower of Power”. Ending with cheers of a crowd backing the band and really creating an end of the party atmosphere.