Lūznava is once again being filled with the sounds of jazz

The third year in a row, Lūznava becomes the epicenter of jazz in Latgale 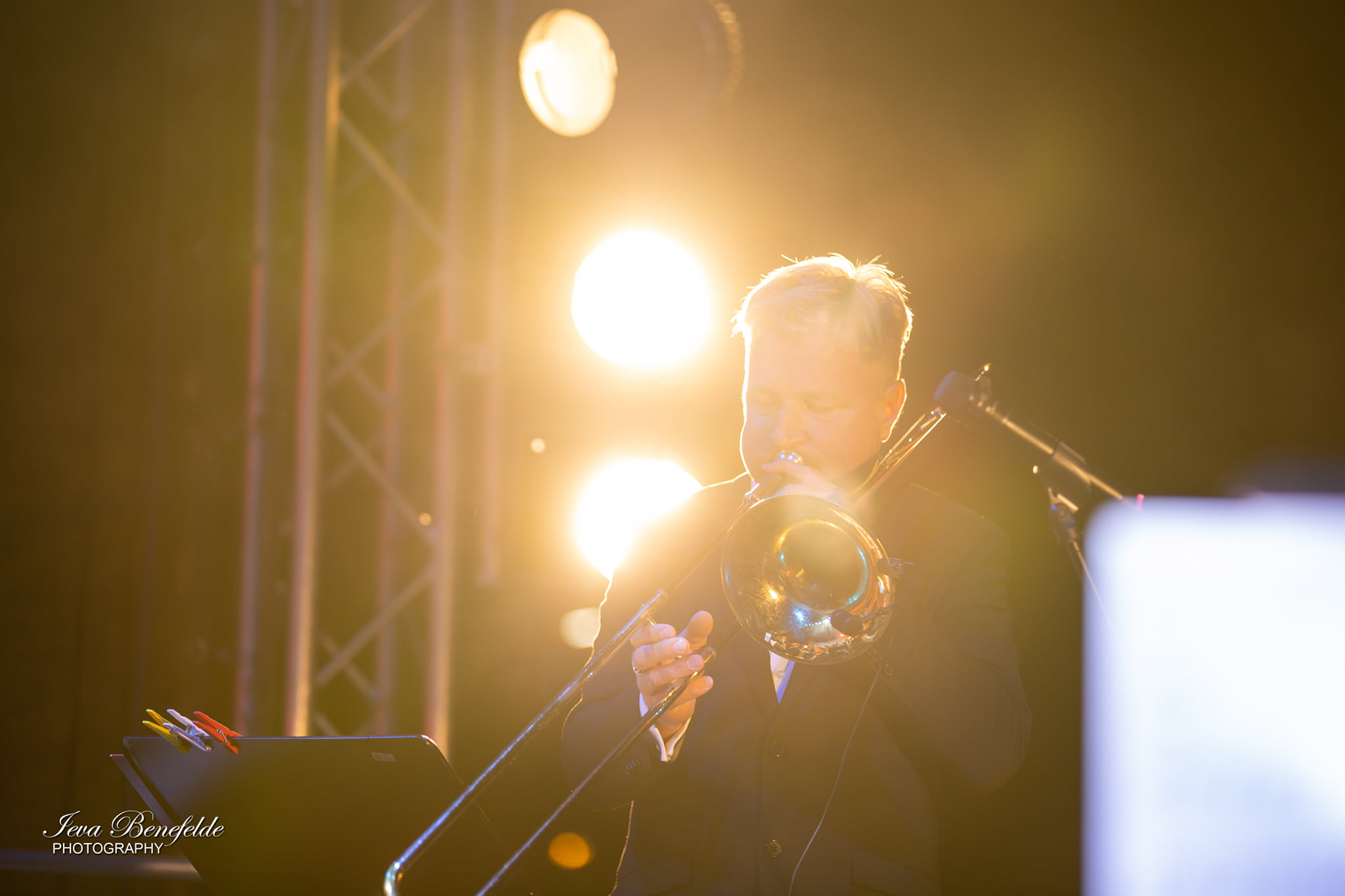 For the third year in a row, Lūznava became an epicenter for Latgalian jazz music. Seven years prior, Lūznava manor had been restored to its former glory; now, it serves as one of the most prestigious locations for cultural events. The spacy manor complex includes an adjacent barn that was restored in 2017. And the name of the festival reflects this new addition to the manor — «Škiuņa Jazz», which translates to English as «Barn Jazz». The name also represents the soul of the festival — it’s true, easy as only Latgalians can be, full of heart, «Culture barn» was a place that hosted genuine engagements — jam sessions.

At the beginning of the workshop part of the festival, the participants got the chance to get acquainted with one another and the teachers, then they were assigned to their compo. Most of the participants come from Jānis Ivanovs Rēzekne Music High School, both current students, and graduates, also several Lithuanian jazz musicians who had been participating in the workshops for the last three years. The first part of the day was invariably dedicated to specialties, and many students got to have private sessions with the teachers. The second part of the day was filled with combo rehearsals. This year it was possible to choose between various teachers in some specialties since the number of teachers had hit a record high. This gave the students a chance to have different teachers and get even more knowledge out of them, attend even more classes. Each combo has been assigned two teachers who were responsible for combo performances during a final concert where each ensemble would play a 10-minute long program. All in all, there were five different ensembles.

On the first night, there was a concert by «Trio Lipskis/Justs/Arbidāns», who presented their debut album «Taids Džezs», their performance was joined by a pianist Edgars Cīrulis and saxophonist Raimonds Petrovskis. It was the first concert in the festival and gathered an unexpectedly huge amount of people. The listeners also decided to stay after the show and enjoy a jam session which started with a performance by a R’n’B/gospel/jazz ensemble, «The Ciel Experience», who also taught during the workshops. The jam session lasted long into the night, making the first day of the festival reach high revs right from the start!

The festival lasted for only four days, thus the intensity of all events planned was quite high. August 27th started with three completely different performances. The main festival concerts took place on a stage that was built especially for the event right in front of the manors front entrance. The first collective to take the stage was «David Chevallier Trio» from France that brought their own ethno jazz program. Chevallier himself has been considered one of France’s leading contemporary jazz artists. The trio achieved a unique, ethnic sound with a very technical, accurate acoustic performance, which at times tastefully engulfed the listener and at times took him on a cosmic journey. (David Chevallier — acoustic 6 & 12 string guitars, banjo; Sébastien Boisseau — acoustic bass; Christophe Lavergne — drums).

Unfortunately, every single festival day has been accompanied by heavy rain, which became a test on endurance to the listeners, artists, and also instruments, but it didn’t take away from the performances.
The next ensemble to take the stage was Lauris Amantovs quartet and Rūta Dūduma-Ķirse with their program «To each their own folk song» — ethno jazz program, that has only recently been released to the public in the form of a double CD. The ensemble had gathered some of the most prominent jazz musicians in Latvia — Lauris Amantovs, Artis Orubs, Andris Grunte, Viktors Ritovs, and a special guest — a vocalist Rūta Dūduma-Ķirse. The program brightly demonstrated each musicians’ personal voice — starting from some modal harmonies by Viktor Ritovs and to famous polyrhythms by Artis Orubs. By the way, Artis also has been one of the mentors at the workshops. «To each, his own folk song» is a very interesting, melodycal and lyrical addition to the Latvian ethno jazz collection.

The last performance of the first day of the festival was played by «The Ciel Experience», who had already been to Lūznava, but this time they had a talented Rūta Sīpola from Latvia on flute. The stage rumbled since the musicians played with immense power and energy, which brought joy to the listeners and gave them a much-needed spurt of strength to weather the literal storm. Also, the music played by the Miami boys was like a bright demonstration of their ethnic values. Gospel, R’n’B, swing, Haitian traditional music — all that was like a breath of fresh air, once again listening to the music that came from over the ocean. It is also worth mentioning that another musician had joined the band in this concert — it came as a complete surprise to see one of the students come up on stage — a singer Ema Zdanavičiūte. During the workshop sessions, the band leader Claudens Louis was a mentor in a combo where Ema was singing. Louis was amazed by the singer’s unique voice and, during some rehearsal, said: «Would you like to play with us?» At the end of the concert, «The Ciel Experience» played a tune with Ema, which was a very emotional and beautiful moment for all festival’s participants.

The last day of the concert series gave the opportunity for workshop participants to present their programs that they had been working on in their combos. These performances surprised everyone with their high quality, even more than that — all combos were equally good, without having to balance weaker performances with more powerful ones. Each of the five combos had a rhythm section, vocalists, and wind instruments. The participants managed to reach an optimal level of interplay during their five rehearsals, and the performances were different and exciting genre-wise.

The next artist to take the stage on this day was one of the leading saxophonists in Lithuania — Kestutis Vaiginis, along with his quartet. He has also been one of the mentors during the «Škiuņa džezs» workshop session. Vaiginis is one of Lithuania’s jazz saxophonist flagmen who regularly tours all over Europe, often together with Latvian drummer Kaspars Kurdeko. This time his quartet consisted of Lithuanian musicians — Mindaugas Stumbras on guitar, Gediminas Steponavičius on bass, Domantas Razmus on drums. «Kęstutis Vaiginis Quartet» played music that can be named a perfect fusion of modern and academic jazz, tagging along with some bebop and even free jazz. Kestutis had presented himself confidently right at the start of the workshops, during the very first jazz session when he joined «The Ciel Experience» musicians; his precise technique and clear tone made the listener think that he was from the US as well. Later on, Claudens Louis has noted that Kestutis might be one of the best saxophonists in Europe that he had the pleasure of playing with.

«Shabat Quartet» from Estonia had the honor to close the festival’s concert program. This concert also had two workshop mentors — Ara Yaralyan on double bass and Jaan Janson on guitar. They were joined by Aleksandra Kremenetski on drums and Margarita Voskanyan on ethnic flute. The ensemble played Armenian and Jewish traditional melodies arrangements together with their own compositions. «Shabat Quartet» has provided another color to the unending palette of ethno jazz that seems to be the theme for this year’s festival.

And the very last performance during the «Škiuņa džezs» festival and workshops was played by Rēzekne big band lead by Lauris Amantovs. The big band was joined by charming soloists — singer Vita Rusaityte from Lithuania, Kęstutis Vaiginis, Jaan Janson, and Ara Yaralyan. This is the third year in a row that Rēzekne Big band has had the honor to close the workshop and festival program, which had become life-changing to not one but many participants, as they admit themselves later. Inspiration, emotions, motivation — this is what students get from the program, so these days can be equated to two years that many of us had spent in front of our computer screens. I was most delighted by meeting new people. People from so many different places in the world may not speak the same language, but jam sessions made it seem as if we all knew each other for eternity. An event like that was necessary to Latgale, and now we can’t imagine the end of the summer without «Škiuņa džezs». The last four days seemed surreal — surrounded by nature, seemingly in the middle of nowhere but with a unique energy that made Lūznava its epicenter. Go to the barn, it’s incredible here!