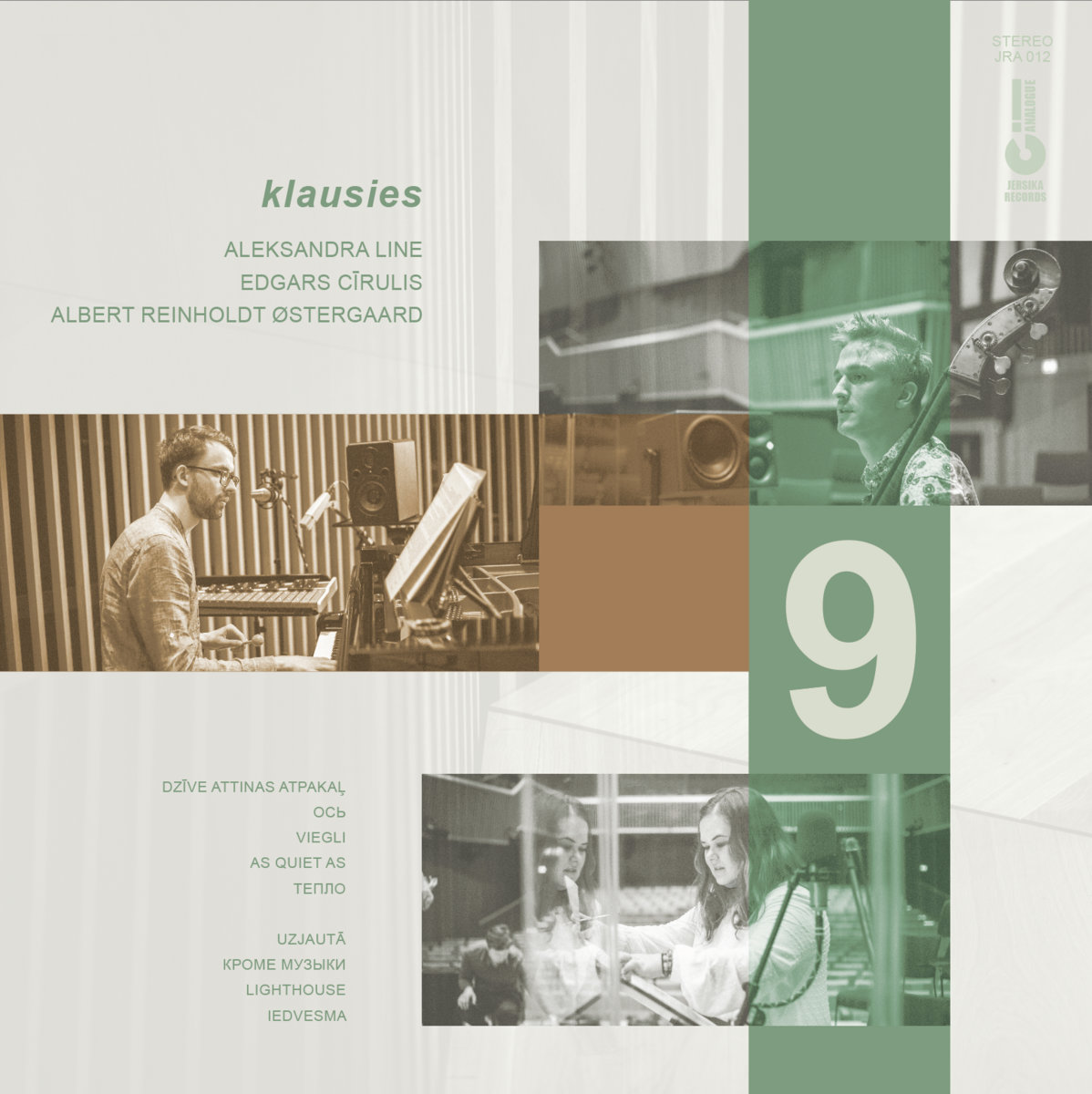 There could have also been other terms, organs, things, substances, or feelings instead of this title because there’s a lot of everything in this new listening. But most of it, however, is about the «music and I» and «music and the world» relations and alike.

Since the project called «Lex poeticus» by Margo Zālīte (fifteen years ago or so), I don’t remember anything like Aleksandra & Co is doing (even though I may have just forgotten it). But the vinyl called «9» is special and cannot be compared to anything else because all of it has been an all-analog live recording with a presence of some listeners at the Ventspils concert hall «Latvija», and everything that was played and read there got into the album in that same way as it sounded.

The first track impresses the listener with Aleksandra’s clear talk, and it’s actually clear-talking instead of poetry reading. The stamp of tenderness makes the listener long for beauty in the further sounding of the album, and the album gives it to the fullest.

After I finished listening to «9», I concluded that the Latvian texts sound more sincere and singing, Russian ones are more intense and dramatic, and English ones — more alienated and mute-like (except the eighth track «lighthouse»). Of course, most probably, it’s my subjective perception of language (Latvian and Russian are my favorite languages, after all), but a regularity can be observed here for sure, even though I’m not sure yet, which exactly, and most probably Aleksandra leniently smiles at the moment, while reading this observation.
Speaking from the technical point of view, I’m fascinated by Aleksandra Line’s quick speech virtuosity in the middle of the fifth track, where the text goes into a seeming unsinchronity, although at the same high speed with the instruments. In many places, especially in the eighth track, I get impressed by the quintessence of different words or paragraphs that Aleksandra says in a seemingly perky tone of voice, however it doesn’t seem to be stubbornness — more like «if I say so, then it will be so, and it actually already is so, and now there’s a lighthouse, full stop».

The ending of the fourth track, the triple «I will», sticks to you as a mantra.

The other places as well, especially the last verse of the ninth track, «iedvesma» (inspiration), prove that the resources of Aleksandra’s voice aren’t fully covered yet, with her low registers and chest voice waiting until more developed and used in an even more diverse manner. Sometimes I think there could be fewer artistic pauses in her speech — it would be more natural to save the flow of the speech without extra highlights that the pauses give.

At some point, I got confused by the word order. But a person who writes poetry in three languages has the right to his own author’s word order.

Edgars Cīrulis and his Danish musical friend, bassist Albert Reinholdt Østergaard, are working in perfect tandem. A listener gets especially attracted to a rewinding effect in the first track, «dzīve attinas atpakaļ» (life rewinds), Mozart-style and Schopin-like motifs in the second track «ось» (axis), a touch of bells to Aleksandra’s laughter motifs in the fifth track «тепло» (warm) — a bell smile as a final dot accompanying the words «it’s so easy to laugh” and the sixth track «uzjautā» (ask me) that also ends with a bell and laughing, as well as an absolute apparent musical simplicity of the eighth track. Predictability works really well here, for example, in some interval sequences.

Somewhere around the golden ratio there’s the seventh composition «кроме музыки» (except the music), and the voice in the very beginning evokes even some fear, that’s an emotionally saturated active position — you cannot survive without the music! At the end of the track, this miraculous stop brings you to a whirlpool, and it’s so calm and great there, and the arpeggios that make you remember Bach’s Prelude in C minor put everything in order. Even though I remember what Sergey Moreino wrote in the Latvian music magazine «Mūzikas Saule» thirteen years ago: «Music lies on your soul, covering it up; externally succumbing to the circles of the soul, but internally bending and taming the soul, for some time modifying it after its own face and similarity. On the contrary to the word, the music is a patch, a bandage, elastic band…

Music is the poetry of the right hemisphere. A scalpel becomes a patch and a bandage only when it as an instrument becomes fully autonomous and universal; if it also glues and puts and melts everything together while cutting».

I’ve never been sure if I understood correctly what Sergey wanted to say here. In this case, I’m also not sure if I understand. But it addresses me quite well. And it corresponds to what I intuitively thought, only I didn’t have enough skills to put into words. Music will heal you even if it tears you up. A word can slice deeper.

And I also don’t know if the words «gorge and abyss, but I cannot do here without you» can be related to friends, music, or life. Probably to all of it a little bit. Or maybe a lot.

By the way, this album has a perfect length. I don’t belong to the classics who think it’s unprofessional to include less than 60 minutes in one album. You have to include what you have to, instead of what you must.

Well, yes, and after the nine poetry songs, there’s «piena ceļš» (Milky Way) of Imants Kalniņš (I use the small letters in the title, respecting the style of «9»). This one seemed like a really dull composition during my school years. Although, maybe because of its flat arrangement, that probably was just a piano accompaniment. However, everything got changed by the Latvian Song and Dance festival in 2018 when «Piena ceļš» in Rihards Dubra’s instrumentation became almost like a top of the festival (and a special event for Uģis Brikmanis). Its version by Edgars Cīrulis and Albert Reinholdt Østergaard doesn’t have a cosmic dimension; however, it has a warm and calm summer evening’s taste in the best company possible. Which exactly — everyone has to decide himself.

The highest praise for the sound built by Mārtiņš Krastiņš and the cover created by Edgars Ameriks: reserved and harmonic composition with three colors for three languages with striking photographs by Oskars Upenieks perfectly fit the introverted and deep contents of this specific combination of poetry and music.

I don’t want to know anything about the preparation process at all. The moment itself is a miracle. If this were just a usual concert, I wouldn’t believe it has been recorded — such playing usually doesn’t get recorded — and then there’s just a legend left, the one that nobody who hasn’t been present there can believe anymore.

And these sunny boys, your brothers (a reference to the track «warm»), remind me what the writer Haralds Matulis once told to the Latvian Radio 3 «Klasika» — [it’s so essential] «not to stop on your way to a better world». Aleksandra knows it will become better. I know it won’t. However, what is said by Aleksandra can make me review my statements.