Leave academic frameworks and return to the essence of jazz 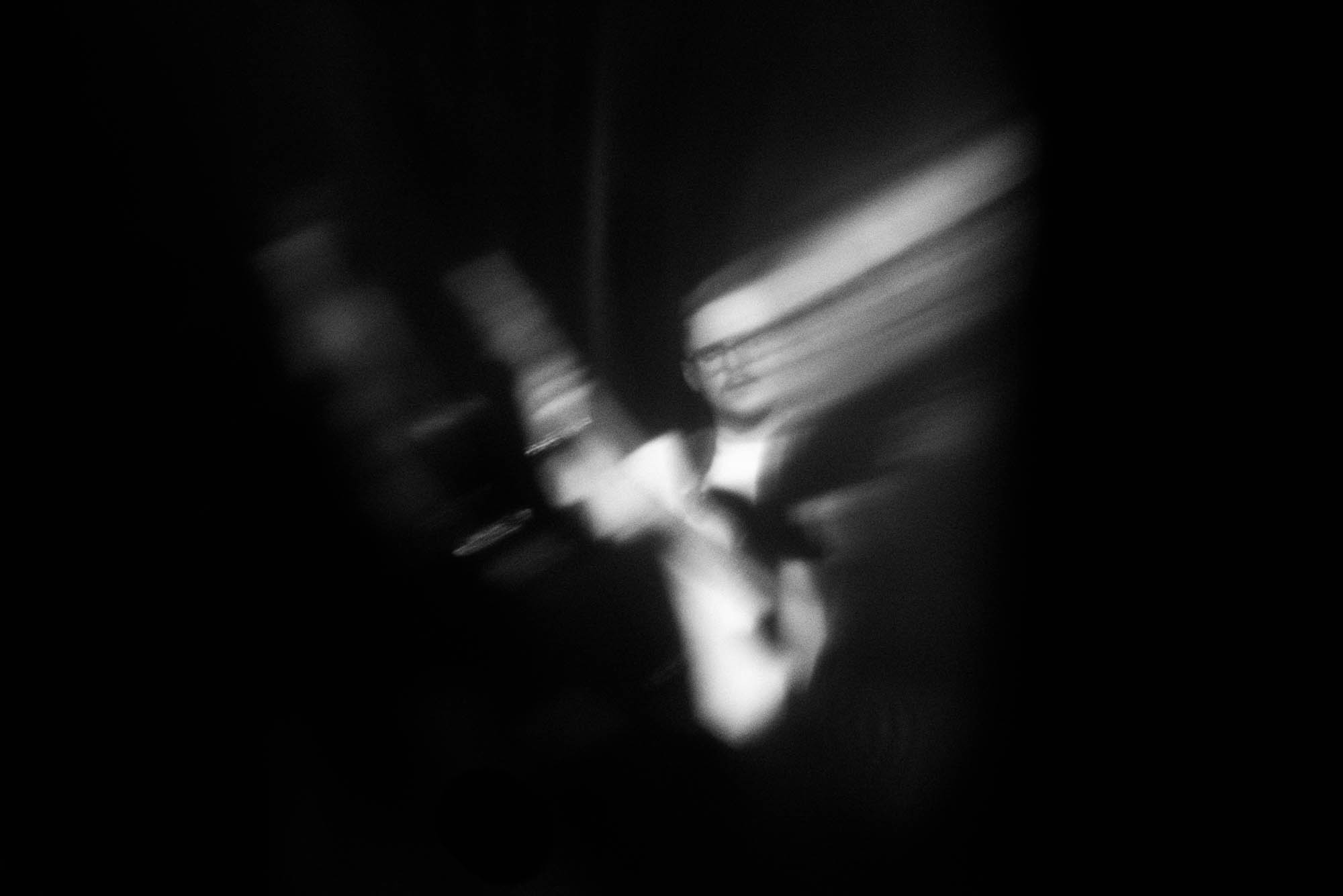 At the beginning of this year’s July, Latvia hosted the internationally appraised festival «Voicingers On Tour» that’s been taking place in Poland since 2008. Once begun as a performance contest and grown as a traveling festival, this time «Voicingers» brought eight international teachers with five-day-long workshops to Latvia, as well as five festival concerts and jam sessions in the hall and outdoor terrace of «M / Darbnīca».

The festival organization in Latvia became a debut of organizing large events for the jazz singer Santa Šillere, who went to Poland for her «Erasmus» studies while being a student at the Latvian Academy of Music and met an artistic director of «Voicingers» Grzegorz Karnas. Armed with patience and a wish to get experience and knowledge as well as the help of a vocalist Līga Kupča, the singer announced five valuable concerts: «Karnas Formula» (with Grzegorz performing himself), «Pawel Kaczmarczyk Trio», «Santa Šillere International Quartet» (where Santa performed arrangements and her own music together with the Polish quartet), «Anna Gadt Extemporizing Ensemble» (together with Polish musicians and a Latvian pianist Edgars Cīrulis) and a final concert of workshop participants.

There were a bunch of precious workshops offered to everyone interested at the Opera Hall of the Jāzeps Vītols Latvian Academy of Music, including basics of polyrhythm, communication in music, improvisation skills, and other useful topics. The JAZZin.lv team was also following the festival news, got inspired, perpetuated concert moments in photos, listened to the music, and talked to musicians and visitors of the event to conclude that the Latvian stop of the festival tour has been a success. 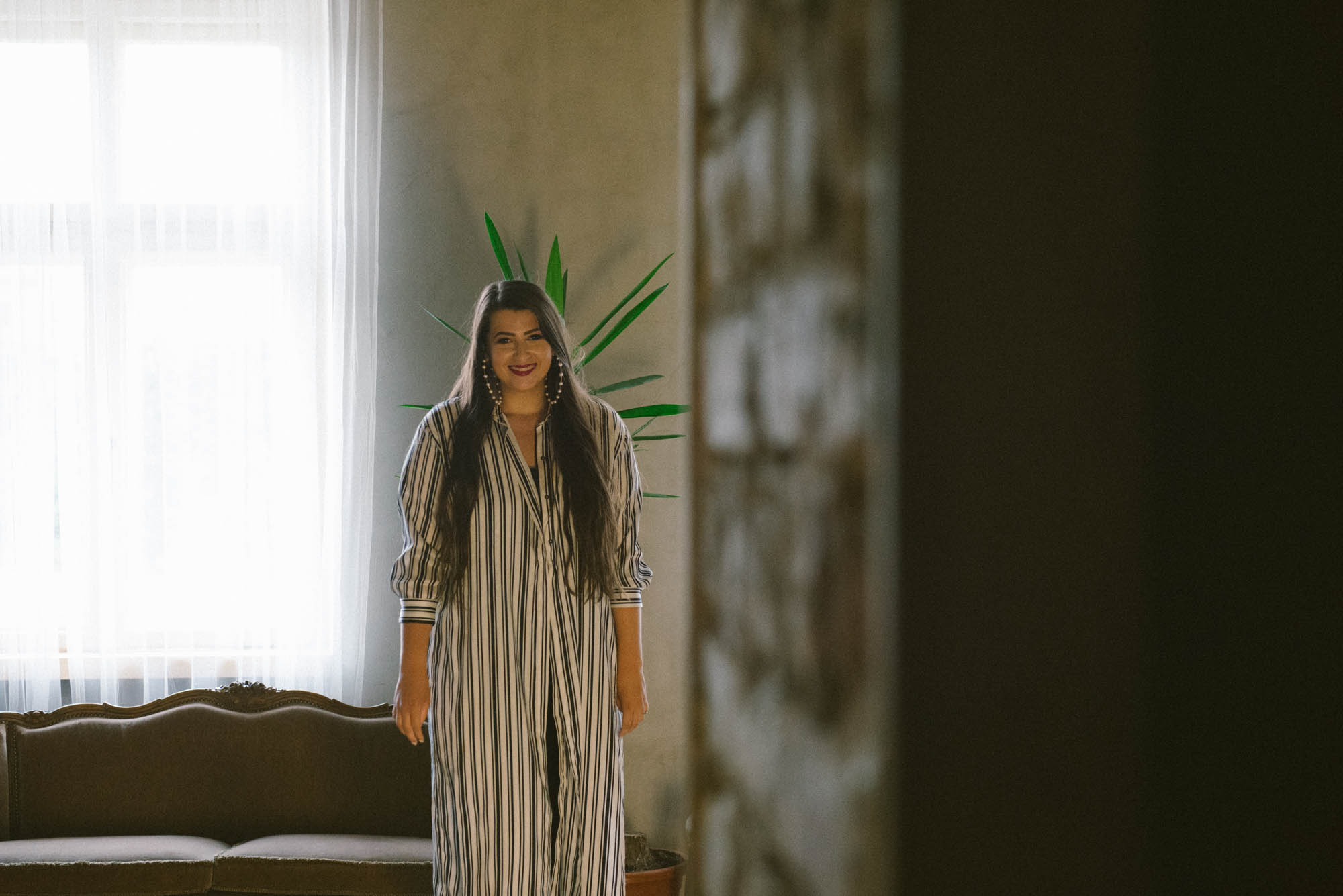 Santa Šillere herself, during the first day of the festival, says: «This is the first major event I had to undertake on my own, and nothing goes precisely as planned, but I guess this is exactly where magic appears. That jazz environment we’re in is very suitable for improvisational situations, so all of this is just one big improvisation.»

The head of the cultural venue, «M / Darbnīca», Maija Moira Mazanova is happy that the festival takes place in her venue: «I’m thrilled. This is a completely new and yet unknown festival here, but I think it can become a nice tradition further on. I had no idea there were such fantastic jazz artists in Poland whom we’d like to create collaborations with in the future. What we’re listening to right now is beautiful, tasteful, light — the listeners will definitely benefit from it. I hope I can participate in one of the workshops myself, and maybe even sing at a jam session.»

The workshop week was actively attended by both young and experienced Latvian jazz singers. Katrīna Kabiņecka says: «I didn’t have such a feeling for a long time, sitting in the classroom with many people present and listening to international lecturer workshops. We had a major focus on the rhythmic aspect, improvisation, and communication between each other — it’s a great feeling, spending a lot of time on the things useful to every musician.» Kelija Macpane is on the same page with Katrīna: «If we compare it to the overall education we’re getting at the Academy right now, it brings freedom, evokes thoughts outside the notes and compositions. All of the lecturers give us interconnected tasks and encourage us to overcome fear.» 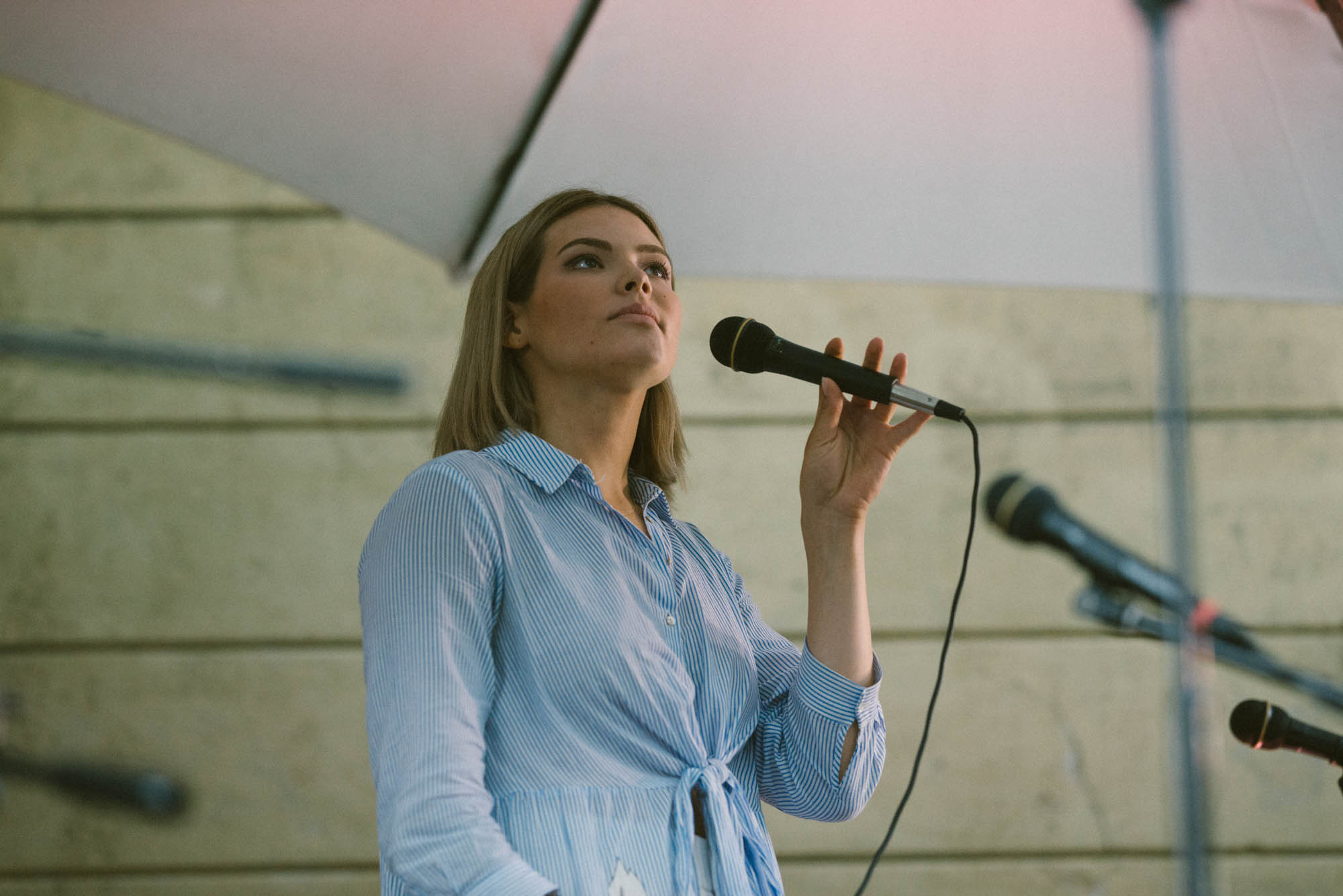 Singer Ieva Kerēvica also joins the girls in her opinion: «I took part in the workshops, and it was interesting to me because there were singers of different levels and I could also observe the teachers’ work with other people. The biggest thing I gained was being able to once more ascertain that it’s really important to be very open in music and cancel all of the borders. The teachers just made it sure again, and it was the goal why I came there — sometimes, living in your own bubble, you begin being in doubt if you’re moving in the right direction. Nevertheless, these people ascertained that I’m not the only one who wants to eliminate borders. Poland has deep roots and tradition in jazz music — these people taught us free and improvised music that was valuable.»

In between the workshops and concerts, our team also talked to the two Polish guest artists and lecturers — Grzegorz Karnas, singer and art director of the festival, and a jazz and improvised music singer Anna Gadt. Both musicians really appreciated the friendly atmosphere and high level of Latvian Singers.

Grzegorz Karnas came to Latvia for the first time and appreciated this experience and the country: «Every time I go to another country with this festival, first I meet the people of this country. You have so many tall people, for example! But overall, people here are nice, however very reserved, reticent, calm, and hide their emotions. I think it might be connected to the size of the country, as well as it is in some other countries… Latvians who attended the workshops are gifted — there really was no one who couldn’t make the right sound, their minds are open, and it’s easy to work with them.» 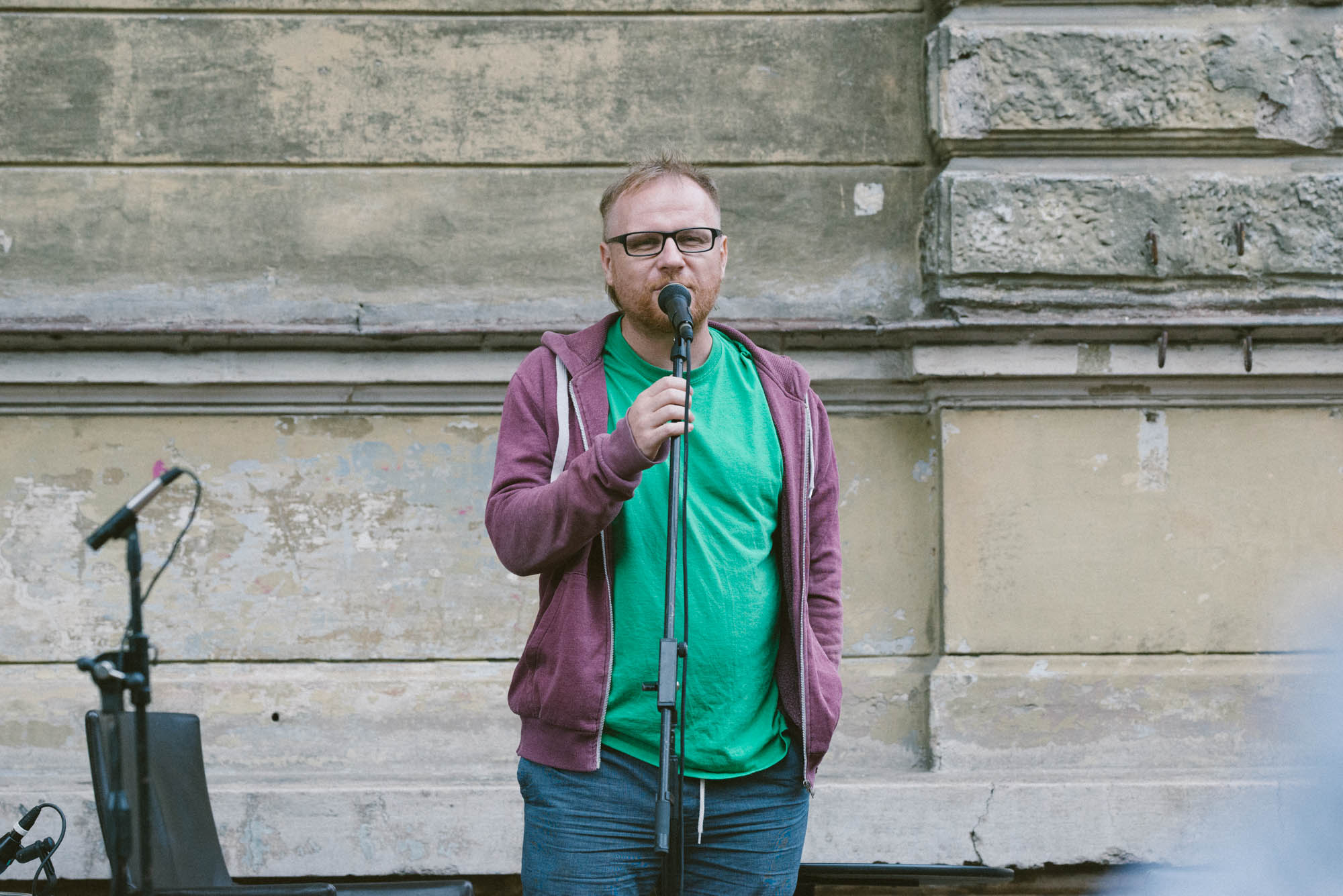 Anna Gadt had already visited Latvia in 2006, but this time is different for her: «it was intense, thanks to this significant energy. I already knew Santa, and she told me a lot about the Latvians, but I didn’t expect what I saw here — the girls are really talented and open to new things. During my workshops we were talking about fear — that the singer doesn’t have to fear himself, he has to know what he really wants to tell with his story. We were also talking about what we have inside us, instinct in music, and how we can show it to the listener with the help of the notes. It’s important that people are open and aren’t scared from trying something new.»

In conclusion to this short interview cycle, during the very last evening of the «Voicingers On Tour» Latvian edition, we’ve talked to Santa Šillere, who was full of emotion and had high hopes for the festival’s bright future: «Even though it all went very differently, the biggest award for me is today’s talk to the workshop participants who told me that everything they’ve experienced during only these five days opened a completely new world for them. At tonight’s concert, the girls tried out things they dared to learn during the workshops, and that’s the biggest achievement — showing the musicians this wide world of music, freedom of improvising, putting their emotions through music and voice. The workshop participants today shared their emotional thoughts on how much it meant to them — this was the very important start for the festival here in Latvia to keep on going and gather more and more young singers and the ones who wish to learn to sing.» 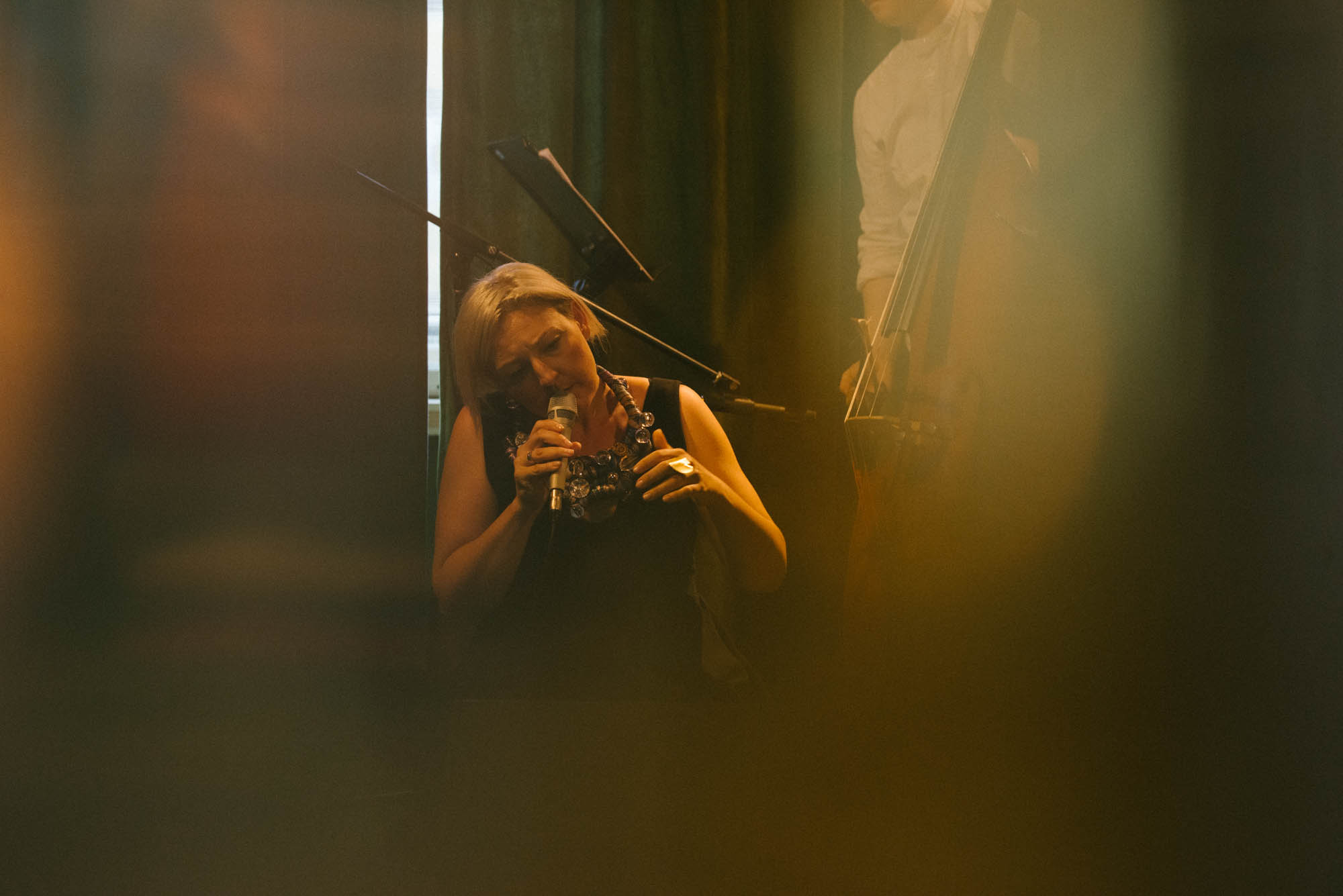