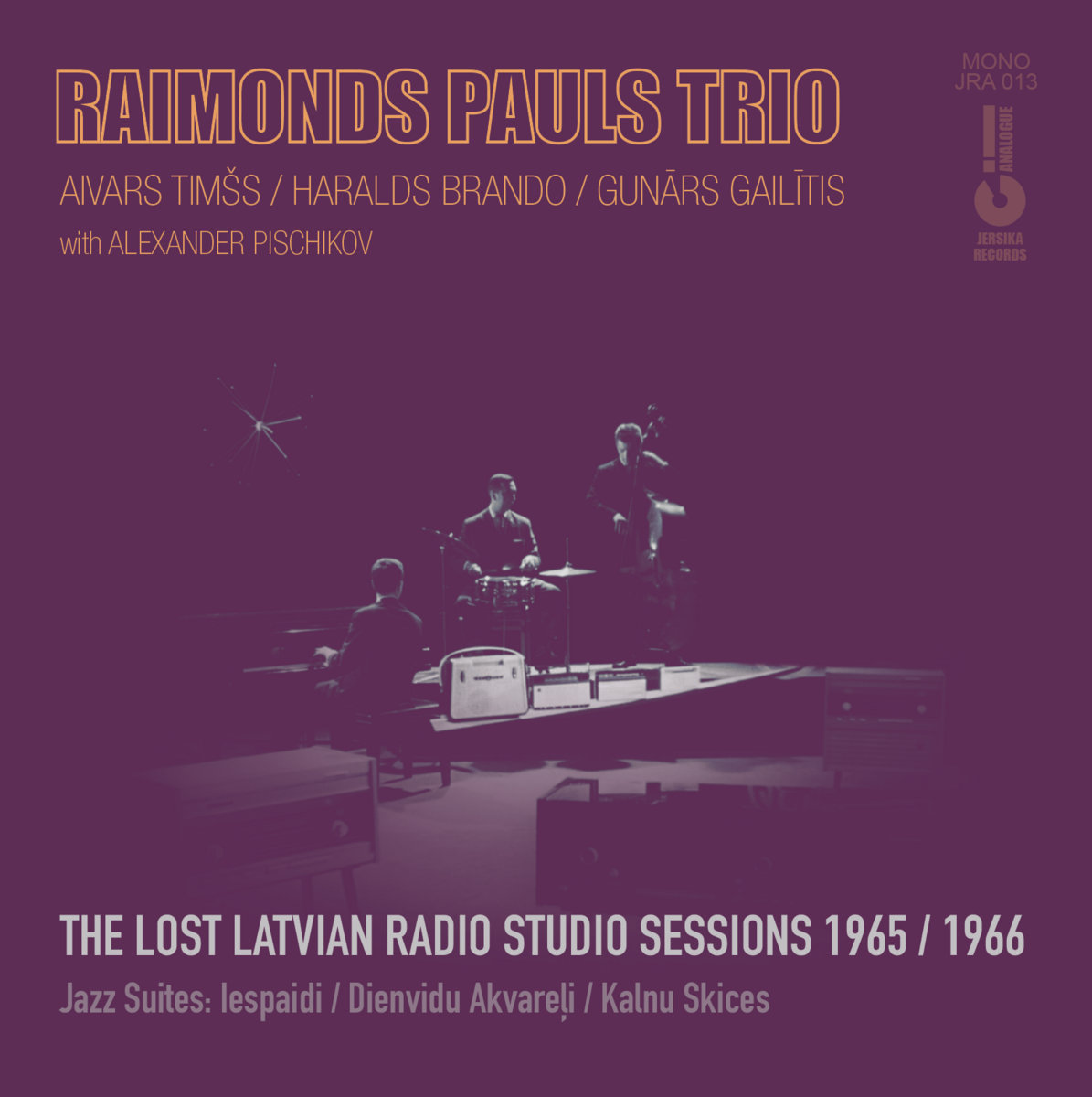 Similar to many other areas, our jazz history and development also gain more considerable publicity all the time, not only within a narrow circle of fans but also within a bigger audience. The news on the found and at last released previously unknown Raimonds Pauls jazz trio recordings was a sensation of sorts. Not only because these are the previously unheard Maestro recordings. Such a find — unknown recordings from the beginning of the 1960s — is a sensational finding on its own and a prominent cultural-historical value that stretches over the borders of this narrow genre. Especially if we consider that the number of Latvian jazz recordings from that period of good quality is really small.

Now, thanks to tireless searches of the producer of the recording company «Jersika Records» Mareks Ameriks and its sound engineer Mārtiņš Krastiņš into the Latvian Radio archives, we can enjoy an uninterrupted authentic time proof from the middle of the 1960s. There we can hear the essential skills and joy of making music of the important Latvian jazz musicians of that time and a somehow recorded understanding of jazz itself in the country and the attitude of the musicians towards it. These aspects may be the most precious, speaking from today’s point of view.

There are three different cycles in the vinyl — suites, each recorded at a different time with a slightly different line-up. The jazz suite «Iespaidi» (Impressions) was recorded on July 23, 1965, with double bassist Aivars Timšs and drummer Gunārs Gailītis. The suite «Dienvidu akvareļi» (Southern watercolors) was recorded on December 14 of the same year together with a saxophonist Aleksandrs Piščikovs, double bassist Aivars Timšs and Haralds Brando at the drums. Finally, the suite «Kalnu skices» (Sketches of mountains) was recorded on October 28, 1966, together with A.Timšs and H.Brando. The sound engineer for this all is Viktors Grundulis.

All of the cycles are original compositions of Raimonds Pauls and, as Mikus Solovejs precisely states in the description on the cover, «the recordings show us pure, lively sources of Raimonds Pauls’ music — melodic simplicity and emotional warmth». The compositions are relatively short, sometimes only a couple of minutes long, although the compact expression is filled with colorful arrangements and vivid musical material.

You can clearly recognize his main inspiration courses in Maestro’s musical manner — it’s Erroll Garner and Oscar Petersen who already create the phrasing manner and articulation of Pauls we know so well. At the same time, it’s fascinating to hear the expressive playing of Pauls in the very beginning of his creative work — that has lots of maximalism, energy, and freedom.

Speaking of the compositions, you cannot skip noting a very clear following the jazz stylistics that undoubtedly creates a great awareness of the musicians about things happening within the development of jazz music. This aspect was one of the reasons for the considerable popularity of the Latvian musicians and respect among the jazzmen of the Soviet Union, because, when consecutively following the best examples of American jazz, within the whole context, our guys really looked «just as they were coming from the West».

This attitude could be heard in the recordings, especially while listening to the rhythm section (H.Brando, A.Timšs, G.Gailīgis) with a traditional, clearly swinging, and stable play, following the best examples of piano trio recordings, especially in the «Iespaidi» suite (O.Petersen’s trio). In this sense, the recordings of the Pauls trio is a unique material where not only the sound of that time and the manner of playing are recorded, but also a solo performance of the leading Latvian jazz drummers of that time, Brando and Gailītis, which hasn’t been retained anywhere before. The ensemble of both musicians, together with a double bassist A.Timšs and their interplay with the trio’s leader and author of the compositions R.Pauls today, gives us a unique opportunity to finally hear the authentic Latvian jazz music sound right as it was back then. This way, the «Jersika Records’» vinyl is a unique historical material where the authentic Latvian jazz musician playing can be heard.

In turn, the performance of the saxophonist A.Piščikovs is direct evidence of the tendencies and influences of one part of the jazz musicians that were leading back then. A distinct post-coltranist, one of the best and most renowned saxophonists of that time, A. Piščikovs, besides his work at REO, consecutively continued going in the avant-garde jazz direction. But, unfortunately, right when he was playing his Coltrane-like solo, the fateful phone call from Moscow took place, and then the Tallinn 1967 jazz festival concert translation on Soviet television was interrupted.

The Coltrane’s influence and post-bop and avant-garde jazz qualities can be heard in the recordings of the trio as well, for example, during the saxophone solo in the compositions «Deja» (Dance) and «Džungļu taka» (Jungle path), but especially in the «Viesuļvētra» (Storm). I have to note that Piščikovs had a whole gang of like-minded people in Latvia, out of which I can mention Vladimirs Kalpakovs and Raimonds Raubiško, which has significantly influenced the Latvian jazz saxophone school during the nearest decades. The Piščikovs’ saxophone sound is a very typical and characteristic example that once again certifies a great level of information and high professionalism that the Latvian jazz musicians had back then.

Nevertheless, despite everything I’ve mentioned before, the recordings (except the «Iespaidi» suite that was released on «Melodija» in 1966 incompletely) haven’t been published back then and were put on a shelf. We can only speculate about the reasons right now, but it is possible that one of them was this characteristic, too «American» jazz sound that was still problematic in the context of the Soviet ideology. There is an opportunity that musician personalities (Piščikovs) played their role as well; however, whatever the reason was, it was completely forgotten about the existence of these recordings, and they lay on the archive shelves until found again in 2020.

Overall rating the significance of the album, in my opinion, we have to pay attention to two of the aspects. First of all, it’s the cultural and historical significance of it which isn’t only a riveting, exciting high-quality testimony of the beginning of Maestro’s creative work, but also a very prominent testimony about the development and level of jazz in Latvia in the 1960ies. And there’s the second aspect as well. The fact that someone has at last seriously approached releasing Latvian historical recordings, researching recording archives, and — we have to definitely mention — high-quality restoring them is really important!

This work has been forgotten for a long time, and the guiltiest of all here are the institutions that possess all these recordings. In this case as well — this vinyl is released by an individual merchant, risking with his own finances, instead of an owner of these recordings Latvian Radio, for example, as one more continuation of its Latvian jazz historical recording series (which, by the way, Swedes, Finns, Norwegians, Danes, and many others have). The treasures that the Latvian Radio and other archives have aren’t just the property of the Radio, but an essential part of the Latvian history of a culture that we have to consecutively and regularly popularize and release so that others can listen to it and explore it, and in the end make our young generation get acquainted with it! It’s regrettable to observe an absolute lack of interest in all those treasures, as well as the ignorance of the availability and popularisation of them for so many years. All we have left is hoping that this arrogant attitude will change with time.

These recordings of R.Pauls trio aren’t the only finds in the archives. It is well-known from reliable sources that soon, we will experience the new release of the legendary Tallinn jazz festival 1967 original recordings with thorough comments and extensive factological material.

With this vinyl, «Jersika Records» have evoked a new, very important turn in the field of Latvian jazz recordings. All I’ve left with is wishing Mareks Ameriks and his team the power and energy to continue this vital work in creating the anthology of the history of Latvian jazz!