Kaspars Zaviļeiskis on an overgrown garden of love 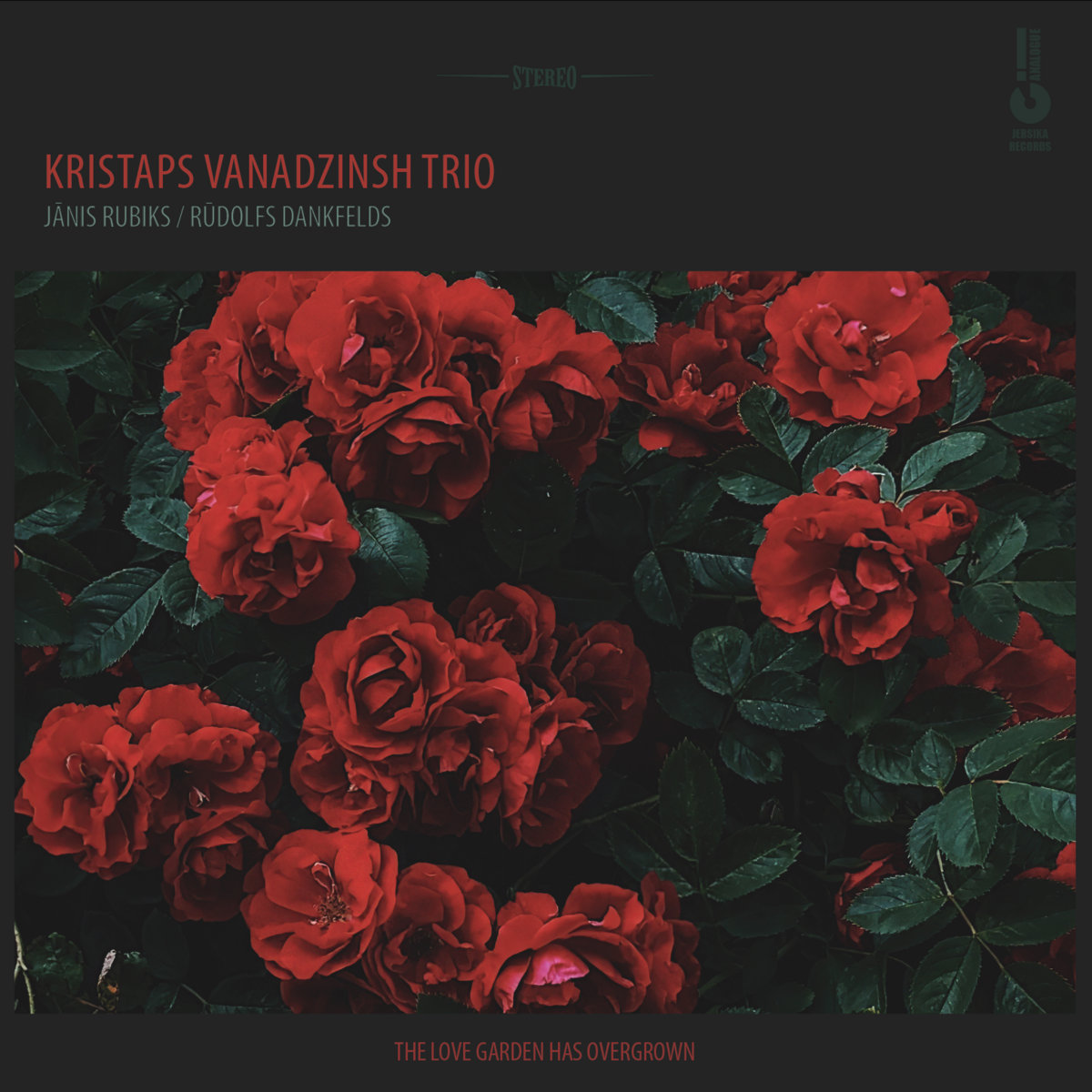 The release of a jazz vinyl of Kristaps Vanadziņš’ trio seems just as logical a fact as a fresh breath after the rain. This is a mature, free Latvian jazz to listen to in a vinyl format. The one with a bright rose bush on the cover and a seemingly inappropriate, however philosophical name, «The Love Garden Has Overgrown».

The garden of Kristaps Vanadziņš, continuing a bright musician line of Vanadziņš family, is definitely not overgrown. He has nurtured it quite thoroughly, purposefully, and systematically. Since sitting at his piano from the early childhood, he has almost momentarily been keen on the pearls of a vast vinyl collection of his granddad, organist Nikolajs Vanadziņš and father Valdis Vanadziņš, went through the toughening filters of Jāzeps Mediņš, Emīls Dārziņš, and Dome choir school, continued his studies abroad… The result is quite powerful — a self-aware, freely flying Latvian pianist of the so-called middle jazzmen generation who has things to tell and knows how to tell them.

And that is better told together with the likewise thinking, professionally equal friends — drummer Rūdolfs Dankfelds who has nurtured his own style, and bassist Jānis Rubiks skillfully retaining the whole sound. Although, of course, it’s no mistake that the trio bears the name of Kristaps, although sticking to the best jazz tradition, this recording is a result of the equal musicians that the listener is only left to enjoy.

«The Love Garden Has Overgrown» has seven instrumental jazz stories. The fact that all of the compositions are stories is what their author Kristaps Vanadziņš keeps saying, and they sound like it quite a lot. In order to tell them in a free way, one obviously needs some companions he can rely on and whom to get out of any musical turns with. The latter is being consciously created both in the form of surprising harmonic and also rhythmical twists because this is what authentic jazz should sound like. Free-flowing, not tied to a note stand, performed with a smile. This is a list that Latvian jazz often lacks, even though many signs of it are evidence of positive changes. And Vanadziņš is one of the flag bearers.

It makes sense that the first thing that draws a listener’s attention to the new jazz album isn’t original compositions but arrangements of the other already well-known composers, especially when we’re speaking about the unofficial British hymn «Land of Hope and Glory» arrangement in a jazz ballad style! Yes, that’s the same military march of the English composer Edward Elgar who has been a composer for the coronation ceremony of King Edward VII more than a hundred years ago, and that’s often sung by the British at some sports and other kinds of events. The arrangement is used on the lyrical part of the march, although a march stays a march; meanwhile, Vanadziņš decided to put it into a jazz trio album and created a cheerful dedication to all of his currently sad compatriots.

Such outbursts signify creative confidence and bravery. The qualities that, when combined with technical professionalism, state an exciting outcome. More usual, although no less delicate, is a rearrangement of the legendary American saxophonist John Coltrane’s ballad «After the Rain». The musicians approached it with a great delicacy, although not applying lots of piety to it, because otherwise, what would be the point to add this composition of Coltrane’s album «Impressions» released in 1963 to their album recorded in 2020? Vanadziņš, Rubiks, and Dankfelds musically shook hands with Tyner, Harrison, and Hines, the original rhythm section of «After the Rain». Kristaps quite meaningfully plays over the melody performed by Coltrane as well, and this composition could be considered a beautiful dedication both to McCoy Tyner, whom the world lost last year, and a soon-to-come after-pandemic time when we’ll get some breath of fresh air after the rain…

Although the main emphasis of this new, by the way, already the fourth album of Kristaps is on his five original compositions. These don’t bear any piety towards other original authors, allowing one-hundred-percent musical freedom both to themselves and the like-minded. It doesn’t mean chaos; it just means a tasteful modern Latvian jazz of 2020. Explaining this, the recording was created in August of 2020 at Ventspils concert hall «Latvija» with a sound engineer Mārtiņš Krastiņš participating and perpetuating the result straightly to the tape recorder. It’s nothing new for the «Jersika Records» releases; however, it doesn’t harm to notice that once again. It’s pretty clear that we tend to get accustomed to great things, and nevertheless.

So it’s time to get accustomed to the newest compositions of Vanadziņš. «It Doesn’t Count When You Believe» playfully begins as a classical music composition from a completely different century until it turns to just as easy jazz language. Even a foreign listener not knowing Latvian musicians instantly knows that here we talk about a jazz trio that feels great playing together, and hopefully, they will also let themselves make some braver moves as well. And that happens indeed. Besides, the very first composition of the vinyl nicely accentuates the Vanadziņš-Rubiks-Dankfelds style — non-intrusive, however persistent searching for the mutual energy, finding it and then letting it free that means musical explosion. This is a play with different jazz traditions, merging different jazz schools and musical experience in one flow of sound where it’s extreme enough, however quite safe for the listener to swim in. There are no underwater stones in the middle of that flow, and there’s no waterfall at the end as well.

It’s clear that trio is the best format for playing music that’s so free, even though it’s quite exciting to listen to the previous album of Kristaps, «Piano Improvisations», released in 2016 as well. The name of it doesn’t lie — here, we can hear six of his piano solo improvisations where the urge of the free flight of «The Love Garden Has Overgrown» can be heard. Such tries were created after his victory at the jazz talent contest «Sony Jazz Stage» in 2007 and playing together with the bassist Stanislav Yudin and drummer Andris Buikis that resulted in the album «The New Trio» released in 2008 and the album «Himalaj», dedicated to his granddad alpinist in 2013, played together with the bassist Edvīns Ozols and drummer Ivars Arutyunyan. Half of the compositions back then were already played by Rūdolfs Dankfelds, although these recordings lacked current confidence. Experience means a lot in jazz because it creates nuances helping one musician differ from another.

Not taking into consideration the contradicting title, «The Love Garden Has Overgrown» is actually a well-yawned garden with a great deal of love towards jazz, based on experience instead of just passion, and isn’t aged as well. This is jazz in its full flourish, that’s also proven by an insidiously lazily begun ballad «Sicilian Dinner» that in the moment of a non-verbal story and development of energy explodes in the best traditions of the VRD trio to sound with a melancholically sad and even a little bit dramatic feeling.

The composition «A Girl at the Table» is the one most full of drive. VRD grooves at an impressive speed, with Vanadziņš offering probably his most playful of the melodic themes and its resolving. The girl at that table, most likely, evokes many arousing, exciting feelings for the author that made him forget all prejudices and stay himself a hundred percent. This, as we all know, demands some bravery, and here we can see this trio doesn’t lack that.
The album ends with «Where Heaven Stopped and the Earth Began» and the title composition of the vinyl — we can perceive both as a jazzy-bluesy diptych that slowly, although keeping the trio’s style, finalizes the flight of VRD and makes us impatiently wait for the continuation.