Hearing some soothing in a sound reflection 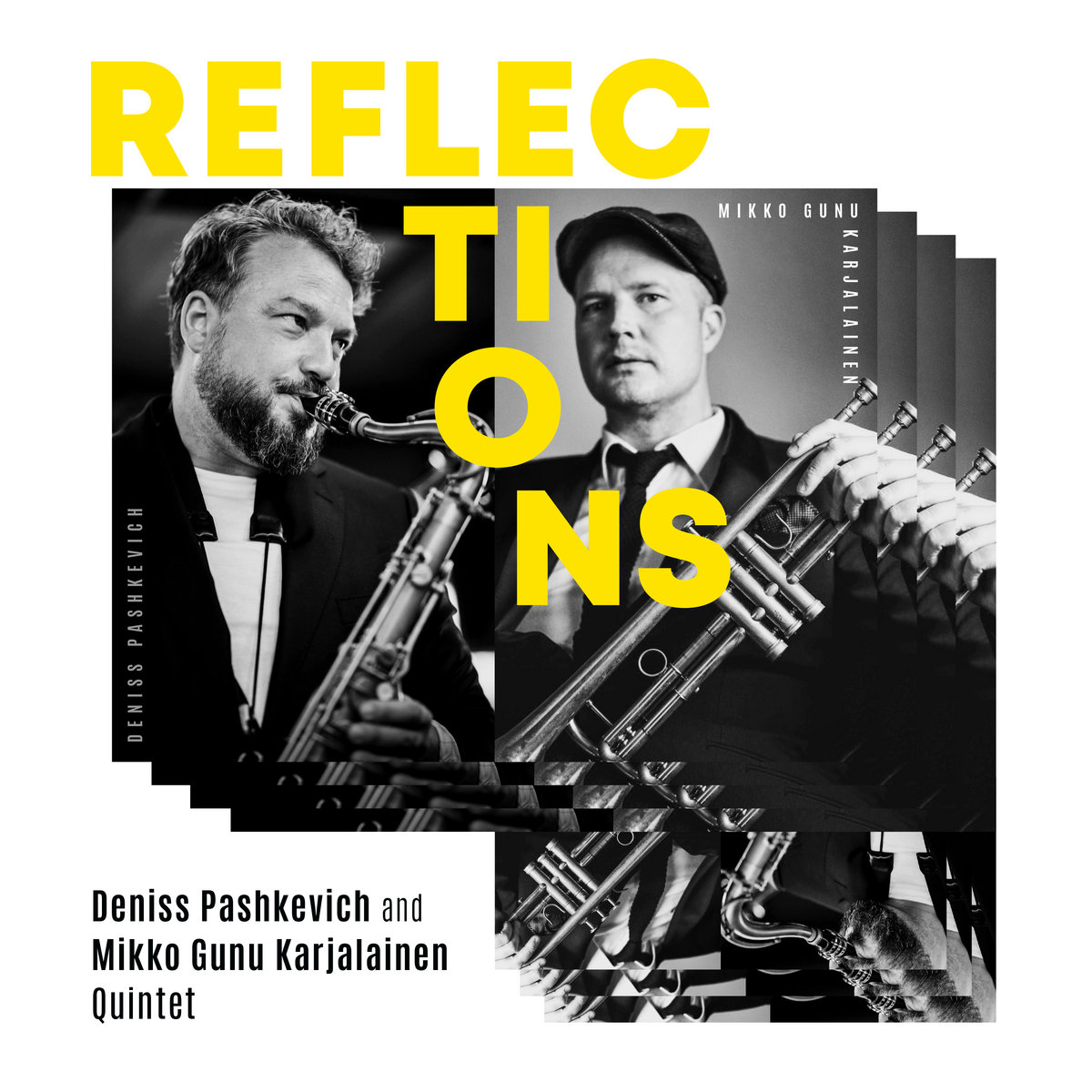 April 30 is a date that’s celebrated as the International Jazz Day in the whole world. The day was also special because the new album by Deniss Pashkevich became available to the broader audience; it was called «Reflections». It consists of ten compositions, the authors of which are Pashkevich on a saxophone and flute, trumpet player from Helsinki Mikko Gunu Karjalainen and pianist Madars Kalniņš.

Deniss Pashkevich is one of the most active and noticeable figures on the Latvian stage. Along with busy gigging (that has been more subdued due to the pandemic) and collaboration with musicians in Latvia and abroad, Pashkevich also teaches and leads a youth big band in Liepāja.

Mikko Gunu Karjalainen has been less known to the Latvian audience until now. It’s not a surprise however that they have found a common language with Pashkevich — the trumpet player living in Helsinki and playing in many different jazz genres is really active both in the local and international context. By the way, Karjalainen is a great pianist as well.

The album that was only released digitally was recorded by the two aforementioned artists, as well as Madars Kalniņš who has been a musical partner of Deniss Pashkevich for many years in various bands, as well as a bassist Stanislav Yudin, and drummer Jānis Jaunalksnis who currently lives and studies in Basel, Switzerland. The recording has been made in the Latvian Radio recording studio and mixed by one of the most experienced specialists in this field Ivars Ozols.

The experience of listening to this album begins with the shortest track time-wise. The composition by Deniss Pashkevich «Laivas» (Boats) is based on brief 2 or 4 bars long melodies, which are repeated identically or with minimal variations. Just as it would be constructed from the «Lego» pieces, a well-structured composition successfully fulfills its function as a warming-up of sorts, preparing for the further musical journey that starts with the hard-bop aesthetics that’s so close to Pashkevich. Each of the soloists then play one by one — in the beginning we hear the trombone timbre, then the piano appears and it all ends with the saxophone. The reprise creates a logical ending to the composition at the end that concludes with repeating the last phrase two more times — a cliche that suits this composition and shows the knowledge of the musicians about the certain style.

Further on we can hear the music of Madars Kalniņš. In the beginning, we hear the composition called «BUG» that’s put in orderly straight eighths rhythmical framework. The name of the composition is written capital letters, and this textual stylistic gives off an impression that that might be an acronym that only the author himself knows. The composition has a repetitive bass line that evokes a wish to move together with it, supported by tasteful chords of the piano. Twice in this composition (in the beginning and before the reprise), we can hear the B part where the composer successfully stepped out of the squareness and made the musical material sound for 11 bars, at the same time keeping the stability of the composition.

The ballad called «Last Night» is created by a 16-bar long lyrical melody, harmonized with bright melodic minor harmonies that can be savored for quite a long time thanks to a slow tempo of the performance. The specifics of the genre and well-composed theme let the musicians play this tune in a straightforward way in terms of the form — no additional structures are required here, for example — any special introduction, outro, or bridges of any sort. Deniss Pashkevich’s saxophone has the honor to play the main melody, leaving improvisation to the trumpet and piano.

Then comes the time for the Finnish guest artist to show his compositional skills. In the beginning the Mikko Karjalainen’s opus «Two Steps» is presented, unique with its rhythmical pattern played by the drums and double bass. One way to call this pattern would be «3:2 son clave»— a musical gesture coming from Latin American music. More roots of this pattern can be found in New Orleans’ «2nd line» marching music. A quote from both these styles can also be heard in the performance of Jānis Jaunalksnis, here and there using the «side-stick» technique on his snare drum that creates an association with Latin American music. Then in some other places, Jaunalksnis uses more traditional methods such as tremolo and especially accentuated beats. Together with note lengths that balance on the edge of straight and swing eighths, it clearly creates the «2nd line» feeling. It’s fascinating that the composition follows the absolutely classical AABA 32 bar logic, even though it isn’t that clear if we listen to it with «non-analytical» ears. A compliment to the composer’s ability to use such cliches unobtrusively.

As the second of Karjalainen’s opuses, we hear the composition called «Wisdom» with the freshness provided by the flute timbre played by Deniss Pashkevich and the musical aesthetics that stretches towards bossanova. The change of improvising soloists in the middle also seems quite interesting.

Right after the middle of the album Madars Kalniņš switches from the acoustic piano to the electric one, and here we turn back to Deniss Pashkevich’s art once again. The composition «Aramaic Man» shows the images and topics of the composition in a really bright way. Most often, we can only approximately understand the contents of the instrumental music — and we only see the name of the composition put into words. This time, the text also comes to help, and that isn’t a spoken word by any of the musicians; however, some fragments are cut from a speech in English. There we can hear the words «God», «Holy Spirit», and «Jesus» together with the name of the composition «Aramaic Man» (historical sources show that Aramaic was the mother tongue of Jesus Christ) show us the religiously philosophical contents of the tune. It isn’t a secret that spirituality and religion are well-known topics for Deniss, and including this message in his album is understandable. The usage of the means of expression is quite interesting — religious topics would definitely be connected to the church organ for our traditional listener, maybe a choir or some classical string or brass timbre. Here, however, modern rhythmical music elements are used, which all together creates a peculiar (not in a bad sense!) mood.

Just as the previous composition, «Brussels» is also quite different. There’s a successful stepping out of the squareness that gives the composition a fresher sound. I have to also notice the well-composed melody with the interval combinations that give it «stickiness» and an ability to stay in the listener’s mind. In the improvisational parts, Jānis Jaunalksnis cuts the texture of his drums in smaller units, from time to time using drum’n’bass stylistic elements. The ending of the composition becomes more persuasive with a gradual ritenuto.

The thematic core of the composition «Resonance» is created by combining two ideas. The first of them (A part) is melodic — material consisting of 4 bars that are repeated four times. The second one (B part) is rhythmic, a harmonic change that happens in a syncopated, accentuated way. In terms of rhythm, there’s a specific link with the previous composition because subdivisions can be felt here as well.

The following composition begins with an almost a minute-long intro, accompanied by a bassy low register sound — double bass played with the arco. «Jasmine» can be called a ballad, speaking in musical terms, this word can mean the singing melody (often with words) performed slowly. In order for it not to be similar to the previous ballad of this album in the sense of the musical interpretation, the rhythm section lightly cuts the pulse in pieces, this way creating an illusion of fast movement, even though the melody consists of long and slow notes; there’s also a sense of inner peace in the improvisational parts. That’s a great example of how the band can create a calm and relaxed atmosphere, at the same time using small notes that are usually associated with something active and dynamic.

The album finishes with «Manago Blues», a composition by Mikko Karjalainen. There the musicians challenge and demonstrate their abilities to improvise in a rapid tempo or, speaking jazz language, up-tempo swing. The musical journey ends right where it began — we return to the roots, to hard-bop.

After listening to this album, there’s a feeling of fullness and completeness. Just as the one after a proper meal when you think you won’t be hungry for quite some time again. The musicians give their listeners a remaining musical message. I really want to note the successfully-structured compositions. There’s a feeling that each of the musicians has thought it all through and paid particular attention to the balance while composing his works. Also, the compositions could have been created like this unconsciously, and the intuition has worked well, and the roots for it were both natural talent and years of experience that generate knowledge about the musical aesthetics and taste. Speaking of performance, there’s also no doubt about the skills and professionalism of the musicians. Would I advise «Reflections» to the ones who began listening to jazz music relatively recently? Most probably yes, because even with this album’s richness of means of expression, it’s pretty easy to listen to.