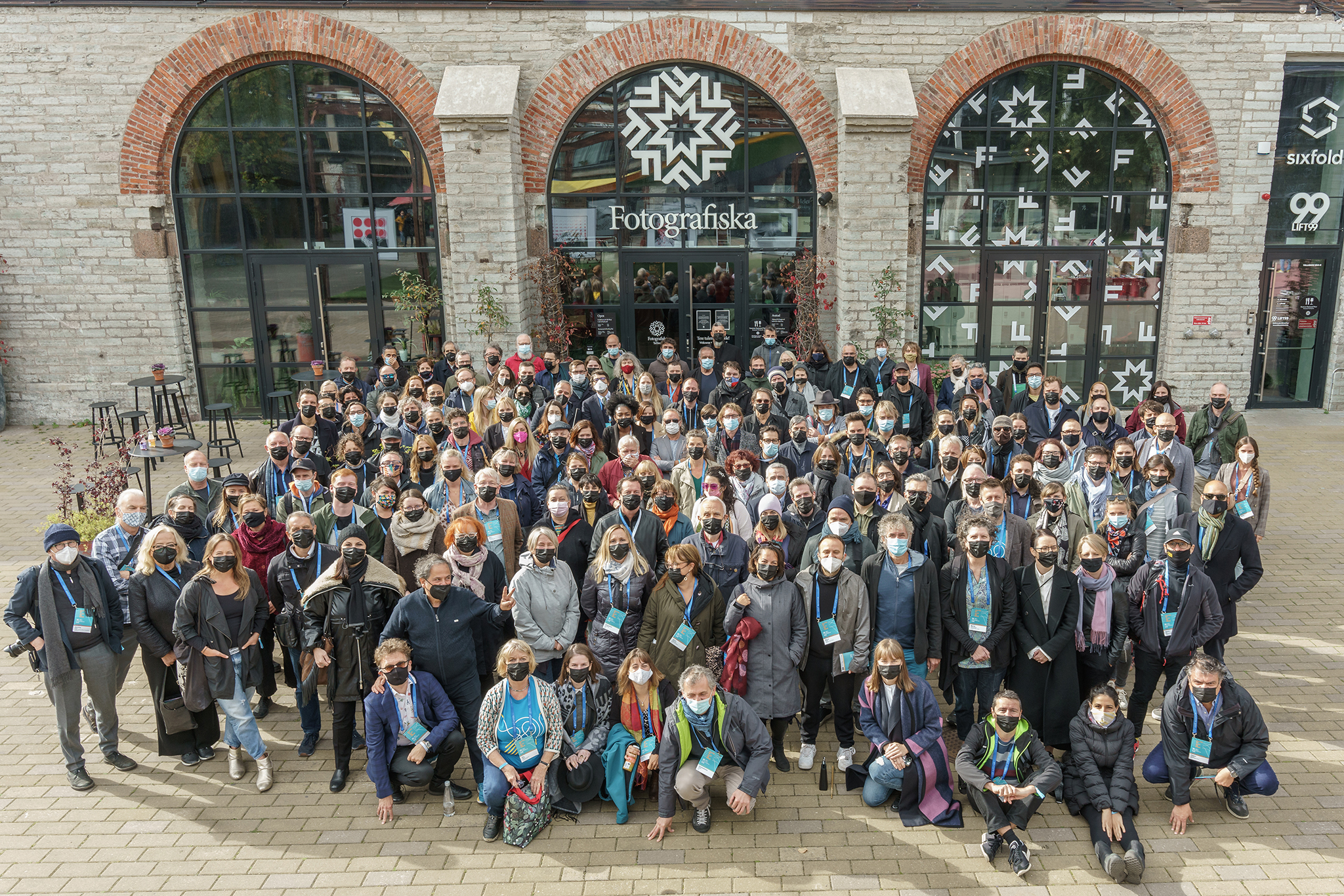 In the middle of September a European jazz hive began buzzing in the Estonian capital Tallinn, shining with autumn sun and cooled down by Nordic winds – European jazz conference took place offline after an unusual 2-year break, gathering more than 200 members from 34 countries. Tallinn was waiting for its prominent guests last year already, although… Better late than never.

The European jazz conference is organized every year by the «European Jazz Network» that unites jazz festival organizers and other people and organizations connected to promoting jazz in this part of the world. The place of the conference is being changed every year – for example, next year the leading European jazz people will gather in the Bulgarian capital Sofia.

The conference welcomes music journalists of many countries who can also attend a significant part of discussions and lectures, as well as showcase and additional program concerts where mainly the artists of the organizer country perform. So in this case the stage was given to the Estonians, even though, for example, our very own drummer Kaspars Kurdeko played at it as a part of the Estonian bassist Peedu Kass. Except for the aforementioned gentlemen, an internationally renowned neighboring country pianist Kristjan Randalu plays music there. I have to also add that the performance of the «Peedu Kass Momentum» wasn’t a disappointment, although it wasn’t a great surprise either. The professional and artistic level of the musicians guaranteed stability and jazzophilic pleasure, even though, as it was a part of the showcase, within a relatively short composition format. The biggest applause was granted to the subtle and deliberate original replica of Peedu Kass to Ennio Morricone’s music composed for the Giuseppe Tornatore’s play film «Cinema Paradiso» needs.

A bigger surprise was Kristjan Randalu’s solo performance a day ago, fearlessly paraphrasing the German 19th-century romanticism composer Robert Schumann’s cycle «Dichterliebe» or «Love of the Poet» songs, where one probably would have to run away really fast if it would be taking place at any classical music forum. Here the listener was left with being able to enjoy and wonder at Randalu’s ability to make every performance sound at its artistic maximum to his taste. This he also proved a couple of weeks ago while performing at the biggest jazz festival in the Baltics «Jazzkaar» with his Estonian big band «New Wind Jazz Orchestra» at the same Tallinn’s theatre center «Vaba Lava». This big band, by the way, has begun fierce fighting in order to receive the status of the governmentally sponsored professional collective. Explanation – there still isn’t such in Estonia. Just as a side note to warm up the Latvian self-esteem…

During the conference the Swiss psychedelic free jazz unit «Trio Heinz Herbert» also performed – the band earned this right two years ago when it won the first European jazz network promising musicians contest «Zenith Award». The biggest musical surprise at the conference for the author of this review and, as it was found out during many private conversations, too many other its participants was another international young musician trio where free-flowing compositions of the Estonian pianist Kirke Karja were played by herself together with a French double bassist Etienne Renard and a German drummer Ludwig Wandinger who looks more like a goth metal band member instead of a jazz trio musician. He also played in a quite surprising manner, using not only drumsticks and brushes and other things, but also changing them every single minute and using some other objects like folium paper, for example. When I was watching the performance of «Karja-Renard-Wandinger» with a wide smile on my face, I came up with the term «refreshing broken jazz» that afterward was also appreciated by the band members themselves. I’m sure we’re going to hear about them in the future! 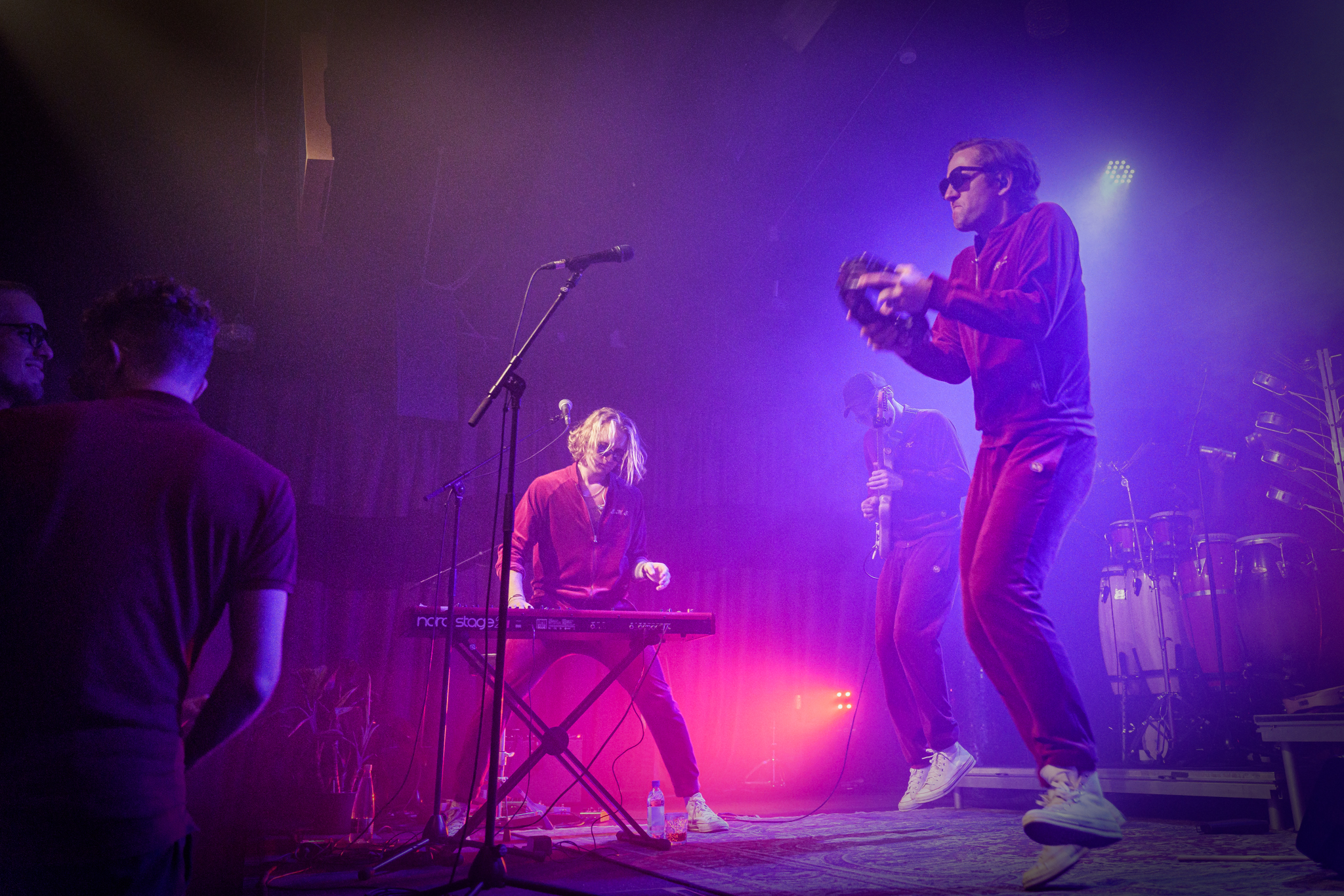 Estonians took care about maximally various musical moods during showcases, finding a spot for both typical classical jazz and brave sound experiments, thus proving that their stage can be exciting in an international manner. By the way, they also didn’t forget about a wild party-oriented funk music gang that was represented by an Estonian band «Lexsoul Dancemachine» with an exquisite taste and hard funk in their pocket that performed on a Friday night in one of many of the Soviet reconstruction wonders of Telliskivi creative quarter – a club called «Erinevate Tubade Klubi», situated on the last floor of the ex-apartment house, where the visitor has to leave not only his coats at the wardrobe but also outdoor shoes, changing them for home slippers to go with the parquet. It’s quite hard to jump along with hard funk rhythms in them, however, but it does create a cozy fun atmosphere immediately.

The theatre center «Vaba Lava» right nearby had a «showcase» program, accompanied by a video film full of different written facts, the musical accompaniment of which was the local folk music-inspired composition jazz arrangements by the Estonian choir music composer Veljo Tormis, played by the well-known musicians, singers Kadri Voorand and Liisi Koikson and guitarists Jaak Sooaar and Paul Daniel quartet «Tormis Quartet», while the taste buds triggered by the garlic toasts, offered by the waiters during the performance. Many facts about the number of forests and singing nation along with the aforementioned toasts created quite Latvian associations. To the Latvian, of course. I thought this is actually a great opportunity for quite a colorful and wide international high-class music gang to get to know local culture treasures, after all. Tallinn used this opportunity for the second time already, because the European jazz conference happened there in 2011 when the Estonian capital was the European capital of culture as well.

Latvia is represented at the European jazz network by «Mūsdienu Mūzikas centrs», modern music center being an organization that founded the international improvisation, jazz and global music festival «Rīgas Ritmi», as well as an international young jazz performers contest «Riga Jazz Stage», jazz concert series «Art of Riga Jazz» and «LV jazz series» along with the other events. Other organizations can also join and who knows – maybe once we can unite to bring the European jazz conference to Riga as well.

Getting back to this year’s conference in Tallinn itself, it makes sense that the major part of the lectures and discussions was about and around the Covid-19 pandemic. A part of the musicians who delivered their public speeches, for example, Estonian saxophonist Maria Faust living in Denmark and a British pianist Alexander Hawkins admitted that the pause evoked by the pandemic restrictions has been a positive time to stop, think and create new things that we wouldn’t have any spare time for otherwise. The fact that the sharp stop of intense concert schedules did good to both creative manifestations and mental and physical health could be heard during the conference many times, making us think that probably the crisis could be used as the opportunity to tidy up yourself and the world around you. 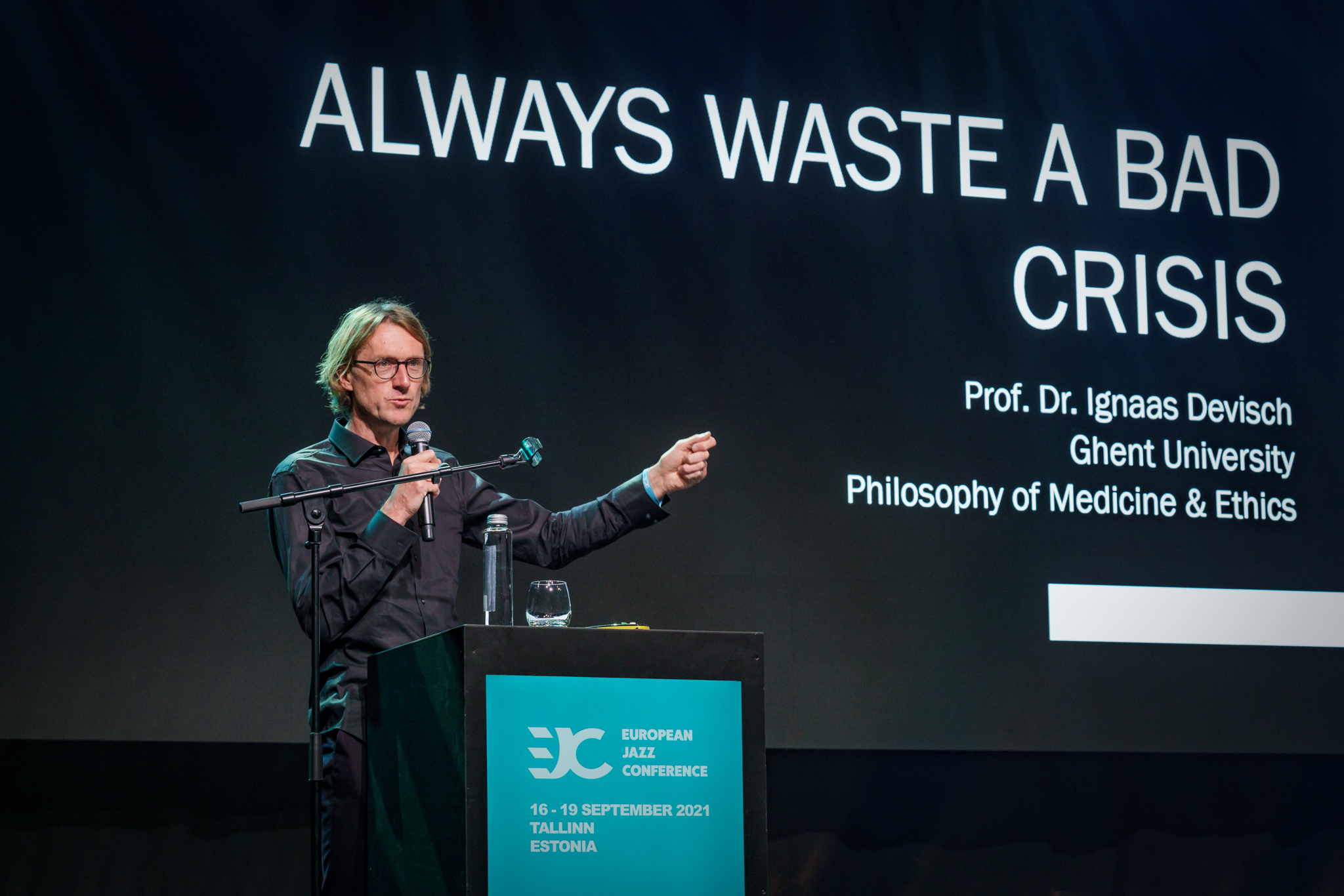 A lecture about the always-changing and inevitable nature of different crises in the democratic society was delivered by a guest lecturer, not connected to the jazz world – a professor of philosophy of medicine and ethics Ignaas Devisch from the University of Ghent, Belgium. He even managed to mention the amazing movie «Life of Brian» of the legendary British dark humor unity «Monty Python» and demonstrate a fragment of it about the arrival of the nation-nominated messiah Brian which also illustrates a shabby model of thinking of this time so-called anti-vaxer revolution. Devisch managed to even get to jazz, letting everyone conclude to himself that jazz will most likely save the world because every crisis needs improvisation…

I will also add that every crisis needs an ability to play in the team as well because the Estonians during the conference have proven that they can act altogether in a really consolidated and quick manner. The conference, in collaboration with the European jazz network partners, was organized by the Estonian music association «Jazz Estonia» and jazz festival «Jazzkaar», with some other supporters taking part, including the Ministry of Culture. The ability to quickly break stereotypes about the Estonian slowness was demonstrated even by the CD seller of the flea market at the Telliskivi creative quarter. Earlier on that morning, he happened to find out that the European jazz conference was going to begin nearby the market, in the photography art center «Fotografiska», and the next moment he built an impressive jazz CD wall on the table, made from his own reserves, and that one was explored by the conference participants with a great interest a bit later.

Flea market near the Saint Alexander Nevsky cathedral in Sofia, anyone?