On the tree of life and observations

Jānis Ruņģis autumn harvest and his solo vinyl and album 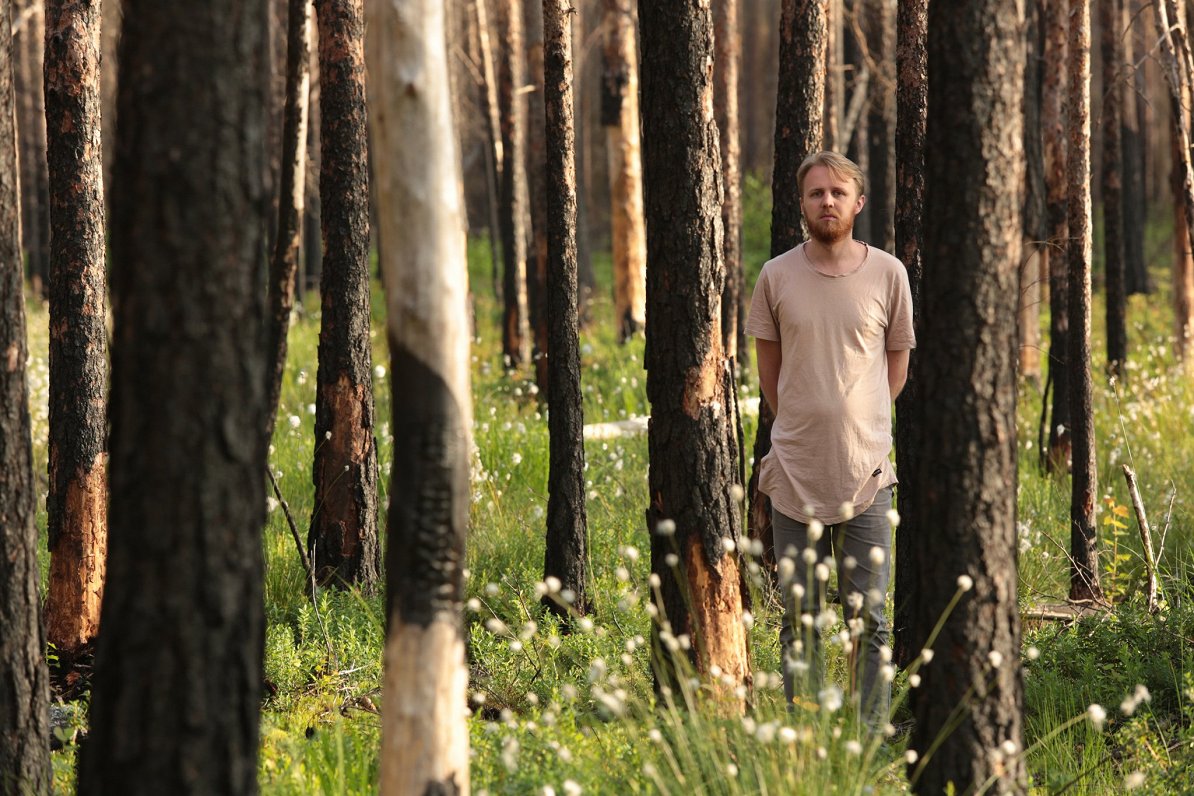 Jānis Ruņģis had a really productive 2020 — a solo vinyl record «Yggdrasil» released under the label «Jersika Records», while «Jāņa Ruņģa klātbūtne» (Presence of Jānis Ruņģis) released the new album «Dzīvojumi» (Livings). So I’ve met Jānis to talk about this different musical material, its creation, and some other events in his musical life.

So the autumn harvest is on, metaphorically speaking. I don’t know if I’ve been very productive this year, but currently, yes, I can tell quite a lot has been done and can be presented to the audience.

If we’re talking about the vinyl – it’s your solo, your essence, and sounds you’ve created during the recordings in the Nurme church. You’re playing not only the guitar we’ve accustomed to hearing but also the organ, different guitars, «Fender Rhodes», «Wurlitzer» electric piano, clavicymbalum, as well as various electric guitar effects. Can you tell me how this idea was born?

First of all, this is a long story with «Jersika Records». I think Toms Rudzinskis was the first one who played a tape in the Vinyl days the label organizes, and then my «Klātbūtne» and I did the second one. That was an adventure itself – that process of making recordings seems twice as interesting for the young generation, but 30 years ago, it was absolutely normal. Back then, we were already thinking of releasing this album, but just because everything has been organized so quickly, the recording quality wasn’t as amazing as we would like it to be. So we didn’t release it then. But, trying to shorten the story, one day we met again at their studio, I listened to the recordings that were recently made, and the most important to me seemed «Codex Faenza» where Ilze Bertrand plays clavicymbalum.

It’s important to mention Kaspars Putriņš, who’s an organ master and created these “harpsichord embryos” because clavicymbalym is a sort of a harpsichord of the 14th – 15th century, although a bit different from a harpsichord. You can tune it as you want to, up to 452 Herz. All of that being put together, we decided to make my recording in the Nurme church – because of the acoustics and because it all seemed really interesting. So we got together and made a recording in three days, we had a small team – Oskars Upenieks who was filming and taking pictures, Mareks Ameriks as a producer, Mārtiņš Krastiņš as the leading sound engineer and Kaspars Putriņš as a person who has taught me a lot. It was fascinating for me to see what’s inside that instrument – we opened the lids, tuned it all. It has been so interesting to me, I haven’t ever seen it before. That is a huge work so that everything would sound nice so that the frequencies would get along together. I concluded that there happen to be some specific harmonies that, when played both on clavicymbalum and organ, sound well together, and there are some that don’t. There’s a Pythagorean tuning, some other ways of tuning, and sometimes you just play a chord that sounds amazing, but if you move it chromatically near, it doesn’t sound at all. You have to really adjust to such things.

Could you understand it at all in just three days you had dedicated to the recording?

Not up to the end, of course. That was like a starter, a snack. I also filled it up with one of my childhood dreams – getting closer to a church organ and playing and recording it. There was an organ from the 19th century in Nurme. May the organ players forgive me, I haven’t studied that, so I played in my own style, trying to create something new on the spot. 90% of the sketches I’ve prepared beforehand just broke apart on the spot, so the album transformed into an improvisation more than anything. For example, in the “Pixels”, I play the guitar with a “hold” function and that weird “loop” at the same time with playing “Fender Rhodes” with my left hand and clavicymbalum with my right hand. At the same time, I improvise with the melodies, change techniques, instruments. It’s really interesting for me – finding new combinations, sounds I haven’t previously heard. You also thought “overdubs” have been used there, but all the sounds you can hear in the recording were being created on the spot.

By the way, it’s important to mention that on the third day of the recording session, when some tiredness was already in the air, the sound engineers accidentally exclaimed there’s a “Wurlitzer”. It appeared that there’s a dusty old “Wurlitzer” organ behind the altar that we took out, swiped the dust off, treated a bit, and at that moment, a new composition was born. Mareks also bought that organ from the church in the end.

We’ve discussed the technical side of the album, but if we’re speaking about the music itself, what were the thoughts, ideas, messages you wanted to put into it and give to the listeners? The name of the album is also based on a story.

I didn’t mention it to my colleagues in the recording process, but a month before we came to record, my old friend gave his life away and committed suicide. It was a shock we all still can’t understand. He was interested in Yggdrasil methodology for quite some time, and his family made his burial place Yggdrasil as well because that’s a tree of world and life that in some mythologies also means a giant ash tree. In the beginning, I didn’t want to give this album any name. Still, Mareks asked me to think of one, so I didn’t have any other ideas as calling it Yggdrasil because of the presence of Matīss Runntulis; that energy was somewhere there in the recording process. This album is a dedication to him.

The musical structure of the album is a circle composition because the beginning and the ending are mutually connected.

Yes, this is a deliberate decision. It happened, of course, while creating the sequence of the composition, and it seemed logical and beautiful, it happened organically. Such a reflection in the mirror.

Was it the first time you got to know an organ?

Not exactly. I got to lay my hands on the organ of the Ventspils concert hall, and a week before the recording, I also went to the Nurme church to familiarize themselves with the instrument, play an acoustic guitar there, understand the acoustics, get prepared. The first time I got there it was approximately +9 degrees in the church, it was really damp and chilly, and it was constantly +12 degrees during the recording process. It wasn’t easy, as well. It’s just like Esbjorn Svensson said, replying to someone who asked why he keeps composing music like this: “And what kind of music would you write if it was constantly -25 degrees outside?” It was the first experience for me creating music under such conditions, and it definitely affects the music that’s being made.

Especially if the music is mainly improvised.

Yes. There’s one ballad in the album, which is an old composition that I haven’t published before, and I always play it differently.

And what about the new album «Dzīvojumi» by «Jāņa Ruņģa klātbūtne»? Did pandemic time allow you to release this album without live concerts?

It actually has changed nothing to me, I might feel just the same for the last two or three years. In a sense that I try to concentrate on the thing, I love, creating art I always wanted to create.

The music in the «Dzīvojumi» entirely differs from your solo vinyl – it has the vocals, it’s in Latvian, and as you’ve stated yourself, it’s closer to a singer-songwriter genre.

That’s the balance that I like, professionals like, and the audience enjoys. That’s the music to which I would like to reduce myself to right now, to meet some simplicity – it’s just as simple as I can be. Of course, the songs are all produced, glued together as an application of sorts, because there’s a lot of guests in it – Deniss Pashkevich, Stanislav Yudin, Rinalds Maksimovs, Kristīne Pāže, Marija Broča, Miķelis Putniņš, and I’ve recorded a string quartet for the first time as well.

What texts have you used in this music?

There are songs with my lyrics, but not all of them. There are some songs where the text isn’t that essential, more like a musical element. But there are some songs with the text of my old friend Elīna Veckaktiņa, there’s something of Guntars Godiņš. Compared to “Yggdrasil”, on the contrary, we’ve worked on “Dzīvojumi” for a year and a half together with Mārtiņš Krastiņš, which technically happened in the home studio, in the kitchen. We began it last year in Ventspils because nowadays the studio can be anywhere if you have good sound equipment and you’re mobile enough. We went to a bunker in the forest to record some sounds, do some field recordings. But I’d call it tasteful pop music, actually.

Interestingly, both albums are released in quite a short period of time because, even being really different, both of them depict you.

Well, each of us has his own edges in his character and emotions. You also want to show the people that it can happen like this, like that, in some other way.

And which of these edges of yourself do you demonstrate more often?

I think they’re in some balance of sorts. I currently concentrate on developing some new skills – singing, producing. In relation to the vinyl, I was thrilled as an artist because it was the first time I didn’t have to do so much myself, manage and cover it all financially, and it differs from all the other recordings of mine. I could allow myself just to be an artist and create, improvise, and be happy about life on the spot.

Your music can be found in the documentary “Klātbūtne” (Presence) of Armands Začs and Liene Linde as well. Does the connection between music and cinema attract you?

A lot. I was dreaming about it for a long time. I have had the experience of composing a couple of movie soundtracks in my life, which is slowly happening. Latvia is small. And now “Klātbūtne”, that received a Lielais Kristaps prize for the best full-length documentary edit. Well, there’s only the way up from now on, the next stop is Hollywood (laughs). I would really like to come to a point in my life where I have an opportunity to create music for such things, for serious movies.

Is there any other news in your musical life we can be waiting for?

I have almost gathered a team to perform both albums of «Jāņa Ruņģa klātbūtne» together at live concerts, hoping that we could arrange a tour next year. But nobody knows for sure how to organize and manage anything in this pandemic time, so I can only hope that it can happen.