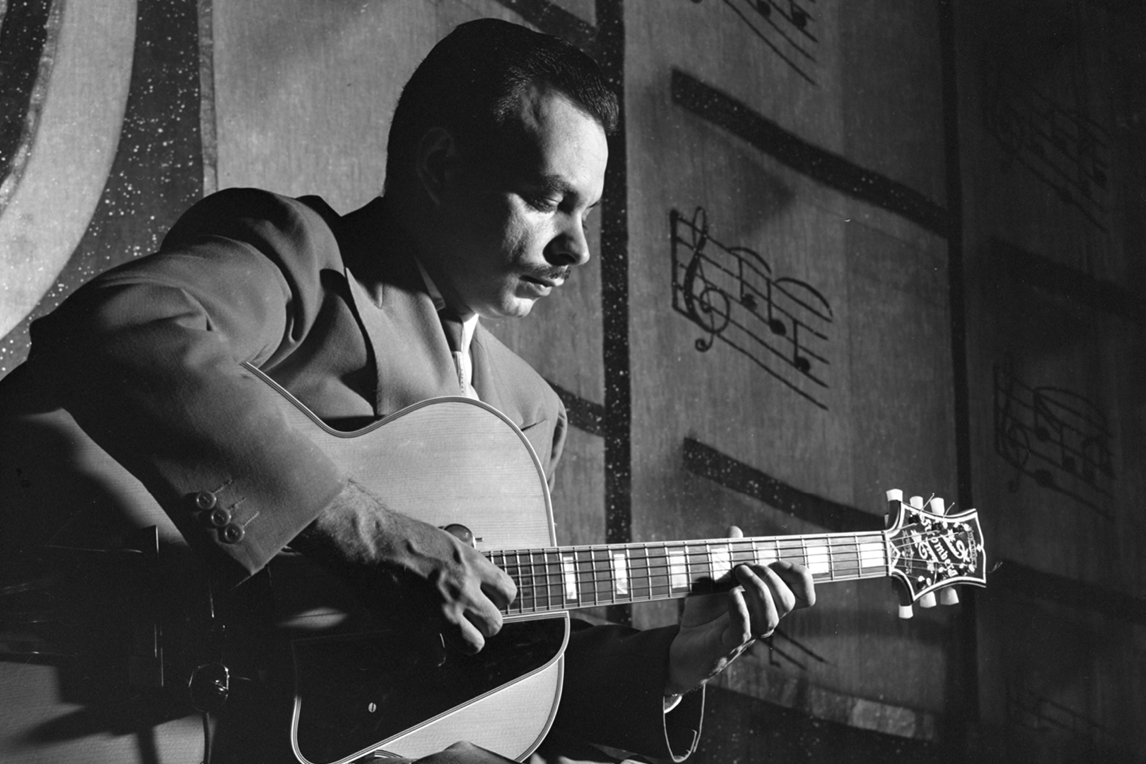 Laurindo Almeida was born in 1917 in Sao Paulo state in Brazil. Learned to play the guitar all by himself, in his teens worked on the radio, arranged music of different styles, and played in nightclubs. As a result of playing on cruise ships, got to Europe, where saw a Django Reinhardt concert in Paris, which left a powerful impression, and Reinhardt became one of the most prominent musical sources of inspiration for Almeida. Upon returning to Brazil and continuing his path, Almeira created a versatile musician’s reputation, playing classical and popular music. Right before the end of the Second World war moved to the USA, worked in the movie industry, and became a part of the Los Angeles local jazz scene.

Played in the pianist Stan Kenton’s band during its most successful period, at the end of the 40ies. As a band member, Almeida was recognized for his skill to unite his Latin American roots with modern jazz culture. In the middle of the 50ies began establishing his own bands, reaching success, continuing his path, and working both with jazz and classical music. In the middle of the 60ies collaborated with «Modern Jazz Quartet» in the same decade got nominated for Grammy 16 times and got 5 Grammy awards, four of them in the classical music category and one in jazz. In the 70ies founded a long-term chamber jazz band, «The L.A. Four», which successfully existed until the beginning of the 80ies, and then collaborated with guitar players Charlie Bird, Baden Powell, saxophonist Stan Getz and jazz flutist Herbie Mann. During the years of his career, Almeida participated in more than 800 movie soundtracks, including «The Godfather» by Francis Ford Coppola and «Unforgiven» by Clint Eastwood. He actively worked up to his very last week in Los Angeles in 1995.

The most prominent concerts and recordings

The album released in 1958, «Duets with Spanish Guitar», together with a mezzo-soprano Sally Terry and flutist Martin Ruderman, was pronounced one of the first cross-genre classical music albums where Almeida arranges classical and traditional music repertoire, enriching it with different Latin music colors. This album has reached a broad audience and was twice nominated for a Grammy award. The audience’s attitude is well illustrated by the comment of the pop-rock music singer of the 70ies Linda Ronstadt, on «Duets with Spanish Guitar» as one of the favorite and the most significant recordings of her youth years.

He was a close friend of a Brazilian composer Heitor Villa-Lobos, known as the first guitar player who has recorded five of his preludes for the classical guitar. His first guitar concert recording is widely recognized, as well.

The album «Collaboration», released in 1964 with a historically significant band «Modern Jazz Quartet», brightly uniting Almeida’s classical and Latin American music influences with typical for MJQ cool jazz, blues, and bebop roots, resulted in creating a style that has been characterized as chamber jazz. A good illustration for this is the fact that in-between compositions by the MJQ leader, pianist John Lewis and Brazilian composer Antonio Carlos Jobim this album also features fugue by J.S.Bach and a concert of Joaquin Rodrigo Aranjuez.

Together with a saxophone player and flutist Bud Shank, bassist Ray Brown and drummer Shelly Manne in the «The L.A. Four» band line-up, he has toured and recorded ten albums, combining cool jazz with classical music, bossa nova, and samba.

Almeida’s «Girl From Ipanema» performance in 1964, where the original vocal line melody is substituted by whistling, is often heard in various media — movies, ads, etc. As a session guitarist, he has played in many popular pop music singer recordings (Sinatra, King Cole, Crosby, etc.)

Characteristics of the style

Almeida’s primary instrument is a nylon string classical guitar, the essence of his style is a combination between Brazilian and Latin American music roots, classical music, and Los Angeles jazz scene influences. This is why, considering how many different musical contexts he has placed himself in, each of them contains influences of the other styles.

A bright example is Almeida’s work in classical music, for example, the aforementioned recordings of Villa-Lobos and Rodrigo. A significant part of the roots of the classical guitar culture and main repertoire is Brazilian and Latin American music culture. This music is widely performed and interpreted today, and in this context, Almeida’s offer vividly stands out with his personnel, Latin American, natural knowledge of the material, on the contrary from a pure classical style that this material is usually performed in.

Quite interesting is also Almeida’s technique, especially his hand’s placement (most of all, the difference in angle — the palm of his right hand is close to the neck, and the way he uses his left-hand fingers), which is more typical to flamenco and traditional Latin American music and contradicts classical guitar school, and unites inspirations and techniques of different cultures.

On the other hand, it’s worth researching his techniques while working with some popular or jazz music material. In Almeida’s arrangement of a popular music standard, «Blue Moon», one can hear influences by J.S.Bach, with bass lines having elements of polyphonic counterpoint and a brighter harmony not in the separate chord sequences but in the melody structure and intervals in relation to the bass movement.

To sum it up, within the overall jazz music history context, Laurindo Almeida, together with his contribution to classical and Latin American music, can be considered as an example of cool jazz and bossa nova culture.

His place in jazz history

Almeida, especially his album «Laurindo Almeida Quartet Featuring Bud Shank», released in 1953, is considered a prominent stepping stone in the bossa nova genre creation, and his input and ideas still echo in the culture of this music.

Almeida is also wide-known, thanks to his versatility. His ability to unify his authentic Latin American music tradition with classical music and the contemporary scene in the middle of the 20th century in the US has helped many different unique idea and style combinations to evolve, offered new methods inspired by the other genres while working with already known genres (for example, classical music, especially baroque and romanticism), thus helping to guide the genre development and being an example to a musician’s ability to exist in different genres successfully, combinations, and obstacles at the same time.

Undoubtedly, Almeida is a fascinating example that I, as a classical guitar player, had to pay attention to, especially considering his prominent volume of work in classical music. While researching the well-known etude interpretations of E.Villa-Lobos, you can instantly hear the original Brazilian approach that Villa-Lobos put in, which strict classical interpretations often lack. Besides, the jazzy approach to the structure stands out, where Almeida decides to pay more attention to rhythm and separate chord harmonies than classic voice and melodies.

At the same time, while listening to Almeida’s jazz recordings, for example, the aforementioned «Brazilliance» of 1953, besides the style and harmony structures usual for this genre, there’s some specific classical articulation, methods of play (for example, tremolo) and tonality.

All of that brightly illustrates and makes us remember how much of what we now consider classical guitar culture is inseparably connected to Latin American and Brazilian music history and how many strictly classical styles and techniques have evolved from this traditional and exotically non-academic world. So the most significant benefit I got from Almeida while preparing this work, along with that exciting and versatile music, is his existence as proof and illustration to a prominent historical page in the context of jazz music and classical guitar music’s already better known to me.