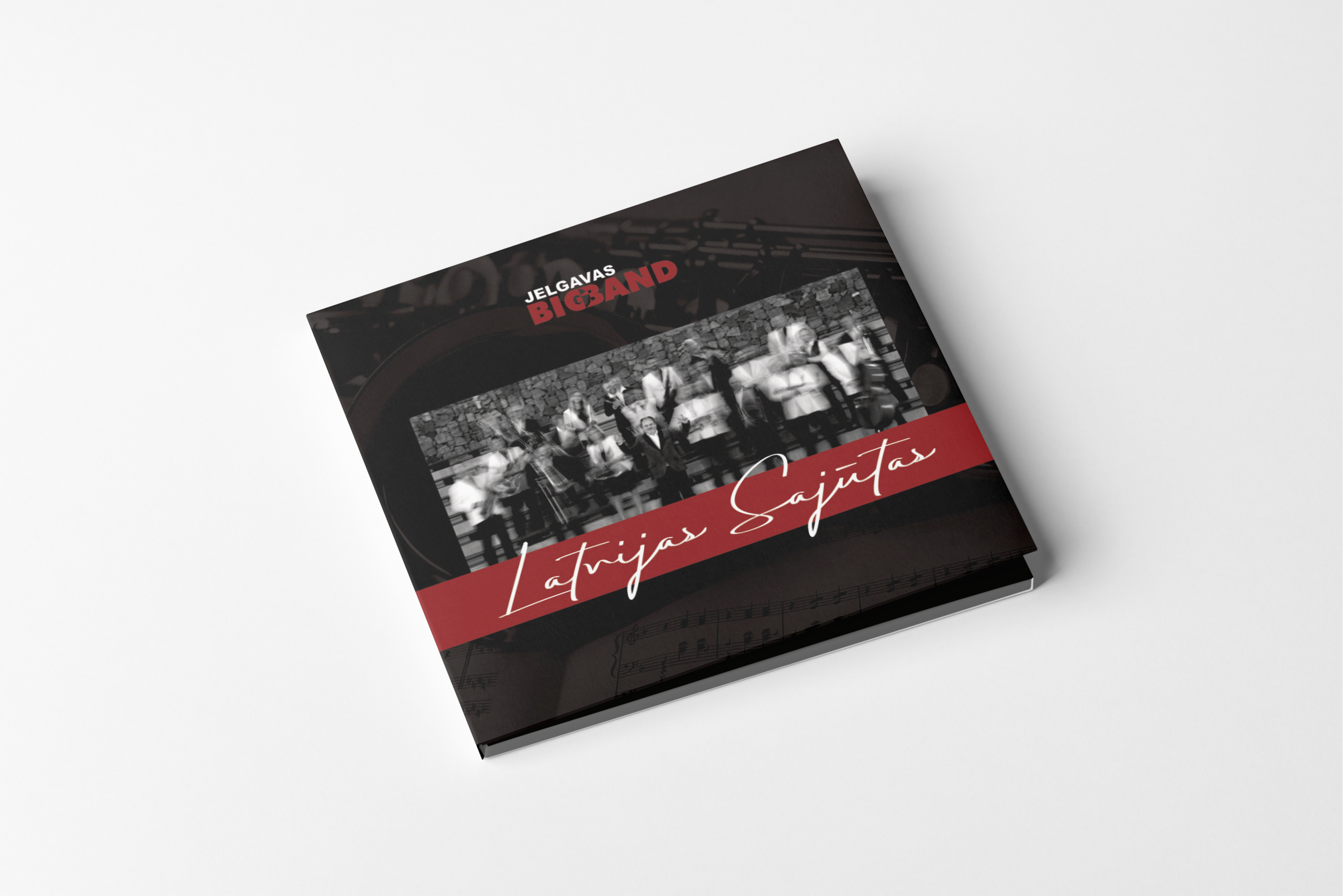 Latvian music, reborn with the new feelings, interwoven with the Latin music rhythms arranged by an American arranger and pianist Michael Abene and performed by Jelgavas Big Band lead by Raitis Ašmanis. The album «Latvijas sajūtas» (Latvian feelings) has convincingly declared its existence in Latvian jazz, taking eight Latvian compositions that have already proven their value in the Latvian culture and allowing them to shine an utterly different light over an entirely different world.

The album consists of six compositions written by Maestro Raimonds Pauls and two Latvian folk songs, arranged by the aforementioned American arranger and pianist Michael Abene, who has worked with world-known jazz music grands like Maynard Ferguson, Buddy Rich, Diane Schuur, Joe Lovano, and the others. One of the most sought-after sound engineers in Latvia, Ivars Ozols, took care of a nuanced sound we can hear in the album, recording the big band in the «Sound Division» recording studio in Riga. That album also pays some credits to a Grammy winner, American sound engineer Paul Blakemore who has worked with more than 500 albums: «Coltrane ’58: The Prestige Recordings» by John Coltrane, «All About That Basie» by Count Basie, «Emily’s D+Evolution» by Esperanza Spalding and many others, including Bill Evans, Danish Radio big band, Diana Krall, Christian Scott, Kurt Elling and many more.

«Latvijas sajūtas» begins with «Mambo Italiano», a composition by Raimonds Pauls. It starts with a persuasive interplay of the big band, bass, and drum kit, where the nuanced sound of the drums played by Harijs Gūtmanis instantly draws our attention. The composition develops, reminding a little bit of the album «Caribe» by a composer and pianist, Michel Camilo, and varying in between the sharpness of the brass instruments and the warm tone of the woodwinds. Bassist Pēteris Liepiņš demonstrates his virtuosity in the composition — he doesn’t let the listener wait but shows his bass guitar solo with the very first improvisation notes. Along with them, we can hear Maestro by the piano himself, organically accompanied by flutes and trumpets, switching to the piano improvisation by the composer where we can hear Maestro in all his glory. Pauls’ style of playing undoubtedly has a unique sound in Latvian music, as well as it has its personality and character. Within decades, this percussive touch has created a unique feeling of presence in any music it’s a part of, bringing the instrument to like, becoming one with it. Piano playing by Raimonds Pauls has become a musical instrument — it’s not just the piano anymore, it’s Raimonds Pauls.

The second composition, «Circenīša Ziemassvētki» (Cricket’s Christmas), begins in a positive mood, with the melody alternating between a soprano saxophone and a flute, and quite soon switches to darker tones. Here we can hear a Jelgava big band pianist, Artjoms Sarvi. Saxophonist Edgars Beļickis grabs attention here with his skillful soprano saxophone improvisation, showing everything from a softly emotional to a squeaking timbre of his instrument, saturating that couple-minute-long solo with some evolution of styles, beginning with a simple melody creation that would be more characteristic to pop music, up to virtuoso phrases, related to jazz. At the end of this solo, a ¾ rhythm along with static harmonies unexpectedly made me think of the significant part of John Coltrane’s version of «My Favorite Things». That composition took a completely different form though since it was first played by the Boys’ choir of the Emīls Dārziņš Special Music High school at their graduation in 1980.

One of the indentations of the album’s mood is «Es aiziet nevaru» (I Can’t Go Away) — a heartbreaking song by Raimonds Pauls that we better know when performed by a Latvian singer Mirdza Zīvere. A sequenced melody and harmonies together with the story, this composition makes us forget to breathe and feel every word written by Vizma Belševica. Even though it’s recorded instrumentally in this album, this is one of the songs where the words don’t disappear into the instrument sounds. In this version of the song, the ambassador of this story isn’t the melody itself, but an alto flute solo of Andis Klučnieks instead, beginning along with the dark big band sound accompaniment. Airy, dark flute timbre, full of emotions, gives the instrumental album a human breath, creating even an ethnic mood, prompting a return of the arrangement in its initial sounding. This, in my opinion, is the main composition part, the one that best illustrates the mood of the composition, its essence — probably in a fragile way, although not losing the richness of emotions about love and weight it brings, selflessly giving yourself to the one that hurts but the one which it couldn’t exist without. To become an illusion in which to get stuck, and through pain and sadness give all of yourself to the one who won’t see you in it ever again, but the one who wouldn’t be able to exist without you, is what I’ve been waiting from this arrangement, and this mood vanished as abruptly, as it appeared.

«Dāvāja Māriņa» (Māriņa’s Gift) is the fourth composition of the album, the most popular song of Raimonds Pauls in the world, that has been translated into Russian, Finnish, Japanese, Hungarian, Vietnamese, Persian and other languages. This song arranged by Abene presents itself in a way more aggressive sounding than we’ve used to hear. A vibraphone solo performed by Ēriks Miezis along with Abene’s arrangement reminded me of the «SFJAZZ Collective» performing Chick Corea compositions. A transition to a quartet line-up with the piano doing an accompaniment function created a pleasant contrast from a saturated big band theme that organically returns in the second part of the solo, with percussion and some song melody elements joining while the vibraphone solo continues. Tenor saxophone solo by Artūrs Sebris continues the composition in the more intense sounding than a vibraphone solo in-between tonal melodies with a couple of nuanced indentations that hold the listener’s attention. Sebris, with his tenor, is like a fish in the sea, showing his classical instrument timbre both in low and high registers, perfectly mastering the effect caused by each. I also have to mention a virtuoso drum solo by Harijs Gūtmanis that’s reservedly accompanied by the big band, giving the musician some space to manifest himself, which Gūtmanis uses wisely, complimenting big band sounds with a rhythmical diversity, convincingly concluding the solo series in this composition.

«Kerijas dziesma» (Carrie’s Song), the fifth composition of this album, went quite away. This song was composed by Raimonds Pauls for a musical «Sister Carrie» that premiered in 1979. The musical is based on the motifs of the novel «Sister Carrie» by an American writer Theodore Dreiser written in 1900. This story has traveled from the US to Latvia, where it was musically performed by Raimonds Pauls, and after traveled all the way back to the US to become arranged by Michael Abene to return to Latvia, in the hands of Jelgavas Big Band and Raitis Ašmanis, where the story was entrusted to Normunds Piesis and his flugelhorn. The composition is full of melodic and rhythmic interplays between the soloist and the big band, varying timbres and combinations of the big band instruments, creating an impression about a bigger orchestral line-up, and creating an outstanding balance between brass instruments and woodwinds.

The last composition of Raimonds Pauls in the album is «Mēmā dziesma» (Mute Song), which, just the same as «Es aiziet nevaru», surprised me in the direction of an arrangement. A reflection from «Kerijas dziesma» is an accentuated accompaniment of the melody that here is more dense, orchestral, and harmonically rich. Even though based on this composition, we can hear a major mood, some minor before a tenor saxophone solo by Valters Šmits is a pleasant change, coming not a second earlier to achieve its desired effect. Low accented unisons of the kick drum, bass, baritone saxophone, and bass trombone perfectly complement one another, creating a stable, powerful basis both harmonically and rhythmically. From time to time, it seems that Šmits’ tenor saxophone solo intensely competes with accompanying musicians, although Valters doesn’t miss his line, and he gets his spot under the sun, skillfully demonstrating his abilities in a free interplay with the drummer.

The folk song «Vēja māte» (Wind’s Mother), which probably is better known in the «Ornaments» band arrangement, gives an unexpected color to this album. Notes by saxophone and guitar remind of the Brecker brothers more than of previously heard Latin sounds, and we can also hear Reinis Ašmanis playing drums here instead of Harijs Gūtmanis. Both soloists definitely deserve compliments in this composition — that’s previously mentioned Edgars Beļickis and guitar player Ivars Jercums, who’s in his element here. Although this is one more composition of «Latvijas Sajūtās», the arrangement of which leaves me with more questions in relation to the message of this folk song.

The album ends with one of the most popular, if not the most popular, Latvian folk song, «Pūt, vējiņi», that in the warm tones of Michael Abene’s arrangement lights the last, eighth composition. In this last one, we can enjoy a flugelhorn solo of Normunds Piesis with a little glimpse of the melody from the «Kerijas dziesma», as well as an emotional solo of the Jelgavas Big Band pianist Artjoms Sarvi. With a reflection of the melody from the beginning, along with an evaporating harmonic cloud, this composition fades out on a bright major chord, concluding the «Latvijas sajūtas».

Jelgavas Big Band is undoubtedly one of the precious stones of Latvian jazz. Lead by Raitis Ašmanis, this big band has gone through three decades and begins its fourth one with a powerful statement — in collaboration with such world-known names as Abene and Blakemore, Raimonds Pauls and his pianist’s input in the album, as well as great musicians in the big band’s line-up. I would really like it if nothing was missed here, although, through truly amazing and bright Abene’s arrangements and incredible performance, excellent sound quality, and overall high-class work I’ve enjoyed while listening to this album, there were many times I got disappointed by the fact that the «stories» were often lost in the translation of the arrangements — stories these compositions were translating for decades. Although along with this, probably, personal nuance, the name of the album justified itself deeper than I was expecting, bringing emotions and thoughts that let the listener get acquainted with these compositions differently through this legendary music and in the new light — and experience these Latvian feelings in a different light, in a different world.