Latgale has its own jazz album now — trio Lipskis/Justs/Arbidāns has debuted with «Taids džezs» («This Jazz»). Thoughts of a music reviewer Kaspars Zaviļeiskis on jazz fusion with Latgalian folk songs 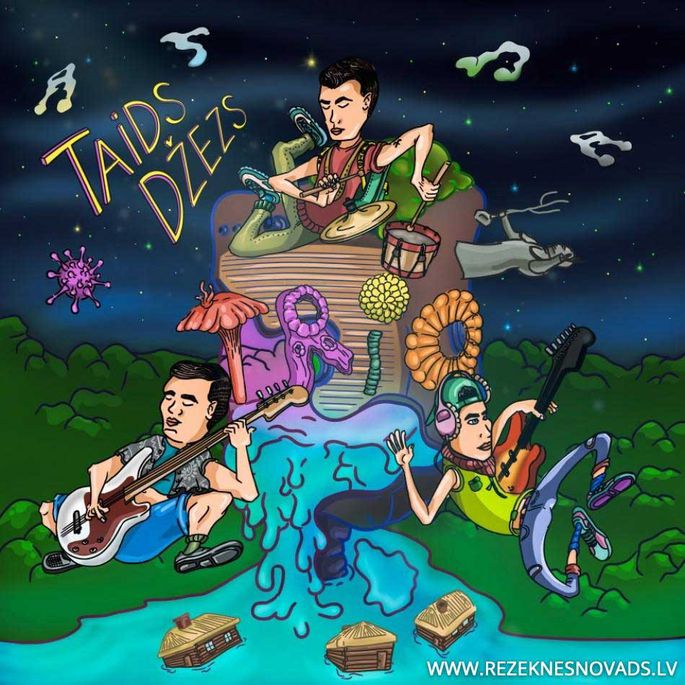 Relationships between jazz and the world, or so-called global music, are pretty old. Jazz in Latvia as well has found its way to folk songs. A nice example in this field is, for example, an album of Māris Briežkalns sextet «Kur tu teci». Now Latgalian (one of the four regions of Latvia) dowry chest has also got itself some jazz arrangement. A very young trio Lipskis/Justs/Arbidāns, took care of this, releasing their debut EP «Taids džezs» («This Jazz»).

The new album with a bright design by a young Latgalian artist Gatis Gorodņičijs features a surprisingly free interplay of not-so-well yet experienced jazz musicians in a Latgalian mode, not being scared to take sharp junctions in their compositions while holding their peace. Probably at some point, this coolness grips into its position too tight, not letting a hotter musical wave explode or letting a fiery groove jump in, which would suit a new band pretty well nowadays, but «fusion» lovers might love this aspect.

So the «fusioned» young generation of Latgalian jazz — drummer Jurģis Lipskis, guitar player Kristians Justs, and bass guitarist Ralfs Arbidāns — go through an almost 18-minute long debut, leaving a feeling of ease and lightness and a wish to hear the music once again. It’s not too typical for a debut EP to have so many exciting nuances and turns, but this one has enough to catch them all on the first listen.

If the Jazz department of the Jānis Ivanovs Rezekne Music School is able to prepare such young talents, they’re doing something right, after all. By the way, another critical moment from the mass media backstage world is that the press release about this debut album was sent by the music theory teacher of the aforementioned school Ilona Rupaine. So the teachers are ready to help their students even outside the school walls, which evokes only sympathy and a wish to catch these signals.

Besides the three main jazz musketeers, «This Jazz» also features piano players Artūrs Krišjānis Goba and Santa Kauliņa, trumpet player Reinis Puriņš, as well as saxophone players Raimonds Petrovskis and Haralds Bauga. At least their recording sounds like a good company that has to get back to playing together during some future projects.

Ivars Ozols did some help at sound mixing and mastering. The sound, of course, could be somewhat more profound and juicier, but, taking into consideration that the band itself in their social media praises «MacBook Pro 2011» for endurance, and also the fact that this is the very first work, the result is great.

Nevertheless, the «MacBook» of the American computer magnate Steve Jobs was not the one to whom these five compositions were dedicated to. The correct addressee was the one who inspired these young musicians, an older brother of Jurģis Lipskis, Toms Lipskis, who unfortunately passed away a couple of years ago, the one who was acknowledged in the whole Latvian jazz world. This is why it’s even more pleasant to hear that the jazz roots in Latgale keep on evolving, offering genre appreciators some Latgalian intonations.

«Taids džezs» begins with a seemingly lulling composition named «Oki, nalej, leiteņ» («Rain, Don’t Rain»), which was previously performed in a rock-music style by a singer Aija Eriņa a couple of years ago. The central theme is done by saxophone, while the band easily grooves on the background, and all of this makes the listener visualize a sunset, which might not be the best solution for the introduction of the album if the latest isn’t called «Romantic Ballads». The theme, of course, is beautiful and so is played, although it would better fit the ending, hence the name of it.

The band doesn’t exactly intend to make the listener stand up and dance at the beginning of the second composition as well, which is called «Aizguoja sauleite» («The Sun Got Down»), and was one of the hits of the Latgalian stars «Baltie lāči» («White Bears»). As we all know, Toms Lipskis has been a member of this band as well… but a moment later the jazz trio Lipskis/Justs/Arbidāns, almost as have waited for that sun to set down, at last, begin a happy «fusion» party, offering one of the unexpected turns which could become handwriting of this trio. The trumpet plays the main role in this composition, but one can also feel the presence of the bass guitar, offering not exactly fiery, nevertheless quite a noticeable groove. The most extended composition of the album also proves that the band shouldn’t be shy of a five-minute-long play because, in the musical direction they’ve chosen, they don’t have to think of a three-minute-long radio and TV show format, which cuts any unusual manifestation in the composition at its root. Here they can just let it all go, and it seems that they’ve no problems with it.

Clear melodicity can be found in the third composition, «Tuoli dzeivoj» («Far She Lived»), with the leading role being taken by the guitar, but after a usual minute, a handbrake gets pushed, taking the left turn in a side slip to a light funky piano part that turns into a relatively aggressive guitar fusion, making one understand who’s the boss in this house, after all. This way of playing could be the real direction the band could take in their bright future, which could lead them to the Riga jazz cafes when such will open their worn doors to tasteful music lovers. «Tuoli dzeivoj» has really lived quite far from Riga because once even the National Song Festival repertoire accepted this composition thanks to the local popularity in Latgale, not the Latvian code. People say this over-sentimental composition is even the localization of a Belarussian melody. Well, «fusion» only benefits from it, even if it’s true.

«Man zeileite viesti nese» («A Titmouse Has Brought A Message To Me») is a Latvalian «Zīlīte» instead of the Livonic Kurzeme (another region of Latgale) one. By the way, the original of it for the needs of a women’s choir at the National Song Festival was arranged by the aforementioned teacher and art-director of the Latgalian embassy «Gors» Ilona Rupaine, but we’re still among the jazz people, so here the bird’s chest is decorated with a synthesized piano groove and a saxophone flight over everything. You’ve just guessed, we’re not missing a quick turn as well! This time it’s around the second minute of the composition, diving into a hypnotic «Pink Floyd»-like play, which fits «fusion» really well.
The debut of Lipskis/Justs/Arbidāns ends with a swinging version of «Meitas guoja vakareitu», where the guitar plays again, logically leaving some space for the piano as well. A resume? Promising. A bit naive, but with some potential, a bit insecure, but with a strong will. There’s some hope that the Latvian jazz world will hear about this trio and its members quite a lot. Latgalian jazz opens its doors.