Electric tree that haunts us at dawn 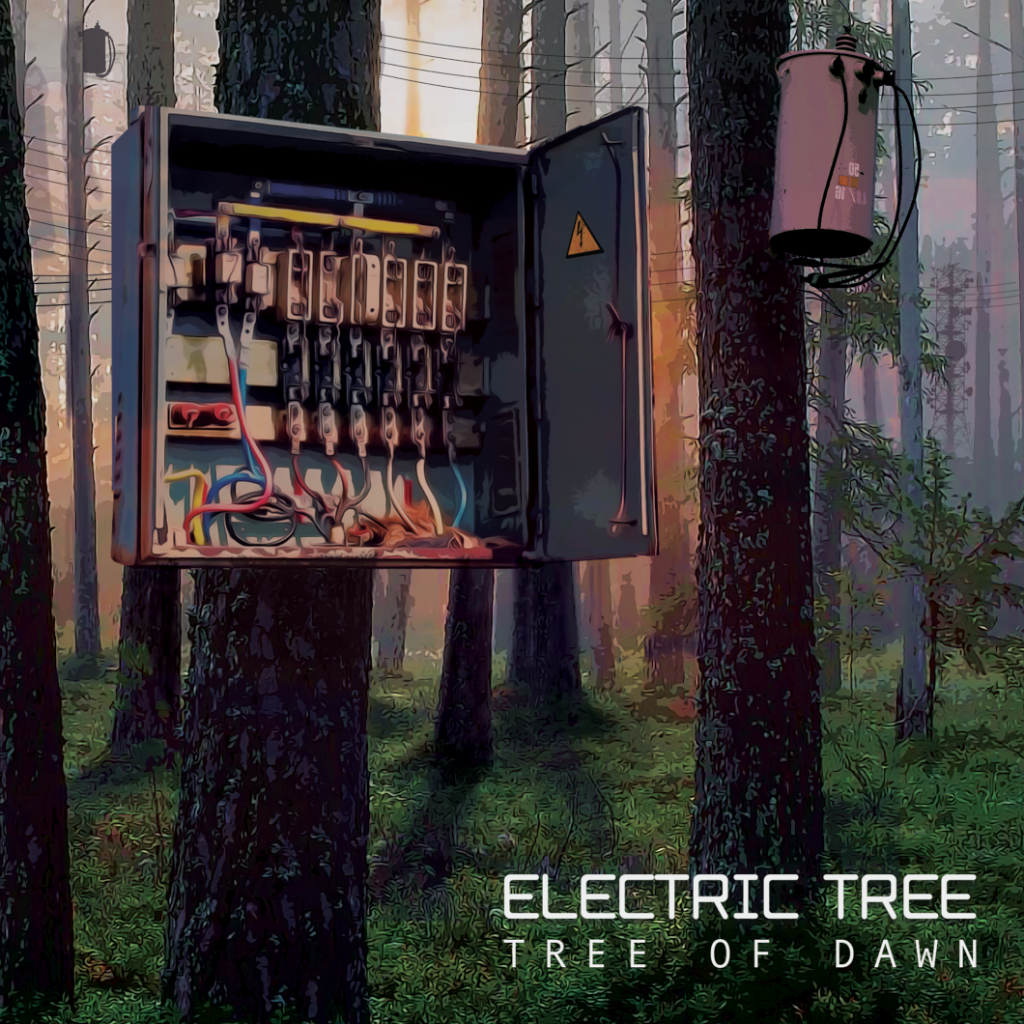 Album by the band «Tree Of Dawn» of the Latvian singer Ronja Burve and Cypris brothers Yerolatsitis is like an unsteady train with its locomotive continuing to roar at your ear while the wagons have already rolled along other rails.

Before I saw the design of the cover of this album, I hadn’t thought about what an electric tree would look like. «Kraftwerk» had an «Electric cafe», Nick Cave and «Grinderman» had an «Electric Alice» — famous and not exactly round concert hall «Electric Ballroom» is in Camden, in London, and we’d better not even mention sadly popular American electric chairs, so what’s an electric tree? Of course, that’s just a usual tree in the forest, most probably popular, perfectly straight Latvian mast pine that’s aiming to the sky, and which has that pale painted metal transformer hut attached to it, so that you can open its lid when the electricity goes down so that you can see all the wires, contacts and fuses. If anything else sparks and fumes there, that’s even more fun. But the topic of trees is really close to this band since it’s called «Tree Of Dawn», so that’s the tree that haunts us at dawn.

The vocalist of «Tree Of Dawn» is a Latvian singer Ronja Burve, and the name itself makes you be expecting some wit, just as the robber’s daughter from the famous Astrid Lindgren’s book had, and more than that — some magic (Burve means witch in Latvian) and all the tricks that witches usually do. Ronja, as well, couldn’t stay still and, after graduating from the Riga Dome Choir School, couldn’t enroll in her dream city Berlin, nevertheless went to study in the Netherlands, and in Hague, together with a pianist Christos Yerolatsitis founded the «Tree Of Dawn» in 2015, then both of them lived in India for a year, and then moved to Cyprus where the brother of Christos, guitarist Andreas, joined them. Experience of India that many Europeans usually choose as their pilgrimage destination is what the singer, according to the interview she gave to JAZZin.lv, associated with the mess, noise, and other inconveniences instead of searching for herself, getting inspired by exotic things or religion of this land. However, the philistinism of Cyprus also isn’t that inspiring to her, so she’s ready to go on searching for her ideal land, so all we’ve left with is just to wish her luck.

Intro to the album, «Spellbound», is promising and draws you in with a sticky melody that relates again and again like a mantra, and along with some matching background pictures, many accompaniments change, and electronics slowly join the rhythms of guitar and one drumstick, at one point taking over everything — suddenly both guitar and voice disappear, a radio can be heard on the background, waking up people just as the Kremlin clock once did before the hymn of the republic in the early mornings. Or maybe that’s a lost hurdy-gurdy played by someone searching for a city square with more people there who are willing to pay? What’s next, though? A voice begins singing again, this time singing just the same thing a capella, lyrically beginning from afar and then slowly getting closer to the piano and an impetuous guitar, until everything disappears once again and only the piano’s left that’s seemingly caught with old radio and then moves further, staying in that wagon that’s not attached to that locomotive so that it moves on. A whole adventure! The next song, «Dragons», begins with a sampled synthetic harpsichord, giving way to the piano later on, but then the playfulness typical to vocal musicals slowly fades, seemingly trying to search for deeper waters which in the end can appear not that deep.

While listening to the following composition, «Vizma’s Garden», I was thinking whether it’s a garden of sorts where all these little rattles would be placed that we can hear in this album, all of them neat and lacquered and gathered from all the places Ronja has traveled to, or it might be a specific creature named Vizma who has tidied up this garden where the birds sing. And does a hero of this musical find peace while being there, forgetting about all the rest to get inspired for this song where everything shines so brightly? I’d say it’s the second guess because the name and the text of this composition are in English instead of Latvian. Some jazz vocalizations appear here, singing along with a guitar that we’d like to listen to for another moment because they’re just so supple and light, opening vocal qualities of Ronja — her voice isn’t that strong, so it wouldn’t make the listener become short of breath, trying to count her octaves. Instead, she is capable of disarming with that simplicity, just as she’s telling something close, really close to your ear. Free improvisation is her passion, and here we have to agree to what she said in her interview last year. Theatricalism is better left for the others.

If the songs are called «Alone Together» and «In A Sentimental Mood», we have to keep it in mind that there are thousands of compositions in the world and even albums like this, and then the only question left is playing these or the others, making the search in the huge database overall easier. I have to admit, both these quite monotonous compositions weaken my interest because they’re as cliche as their names, but that also has some positive side effects. This way, someone can skip stopping the recording and take a smoking break or pour him a new cup of coffee, getting prepared for a new composition, «Let Me Run», that reveals Ronja’s playful nature once again — these are electronic games and a voice of childhood that wants to break free from the four walls of your home, go out and enjoy what your heart desires, and is exactly what happens in the middle of this composition. A synth-pop party begins, with analog timbres switching the ones we’ve got accustomed to listening to from the plastic computer amps, considering it a sign that characterizes this time and undoubtedly reminds us that’s the music of the twenty-first, not the twentieth century. These electronic games, with the piano or the guitar, sounds here and there, take over now, and vocals in the composition «What Is That What I’m Feeling» is now only an instrument, which isn’t that bad because specifically lyrical places were really the obstacles of the album, because it was difficult to believe in the emotions seemingly included in them. That reminded an unsuccessful theatre of sorts. The composition with the longest name is also the longest one in the album, with the duo of the piano and vocalizations slowly moving to the forefront, making everyone else leave the sound space.

«Carousel» is a breath of fresh air for the thirsty again — a pop-soul song where there’s breaking the syllables into the separate notes in the vocals, which dangerously reminded me of Bjork because nobody can be similar to the great Icelandese, nevertheless the vocals together with emotional guitar solos inspire here. And the time has come for the finishing touch, «Familie», which is an instrumental one and seemingly show us that «Tree Of Dawn» family interests turn to play with electronic instruments meanwhile classical and jazzy things together with the piano and vocals belong to the shelves of the past now, which you want to look in just out of an old habit. There’s really quite a lot of electronics in this tree, and the opportunities of it are really used wisely, but a recording is a recording — everything is, in any case, ready and set there, although in the live recordings, whenever they’re possible again after softening restrictions and «Tree Of Dawn» coming to Latvia from Cyprus, I’d still like to see how the sound is being created in front of my own eyes. It’s pretty clear that one can get unbelievable sounds from all these electronic sound boxes, but the listener doesn’t see the process, and the person who’s playing is also way more a subject to whims of what’s happening inside these boxes than when he’s trying to guide a guitar string or voice chord vibrations with his fingers or lips.

Beginning in an optimistic mood, this album somehow isn’t among the ones that you’d like to get back to listening to again and again. Even though I’ve always liked stylistic variety, here I have an impression that the artists are fumbling all the time, looking around, at the same time forgetting that most of the unrevealed secrets are hidden within themselves, with no relation to where they are and where they want to go. The inner trip of an artist is always way more valuable than the one that you can draw a map for and count the kilometers, euros spent or earned, and hours spent on the way. Although the melody of the first song called «Spellbound» keeps resonating in my head for quite some time now, and I have to admit that’s a pleasant feeling. And thank you for that!