Dissonance victory in a peat amphitheater 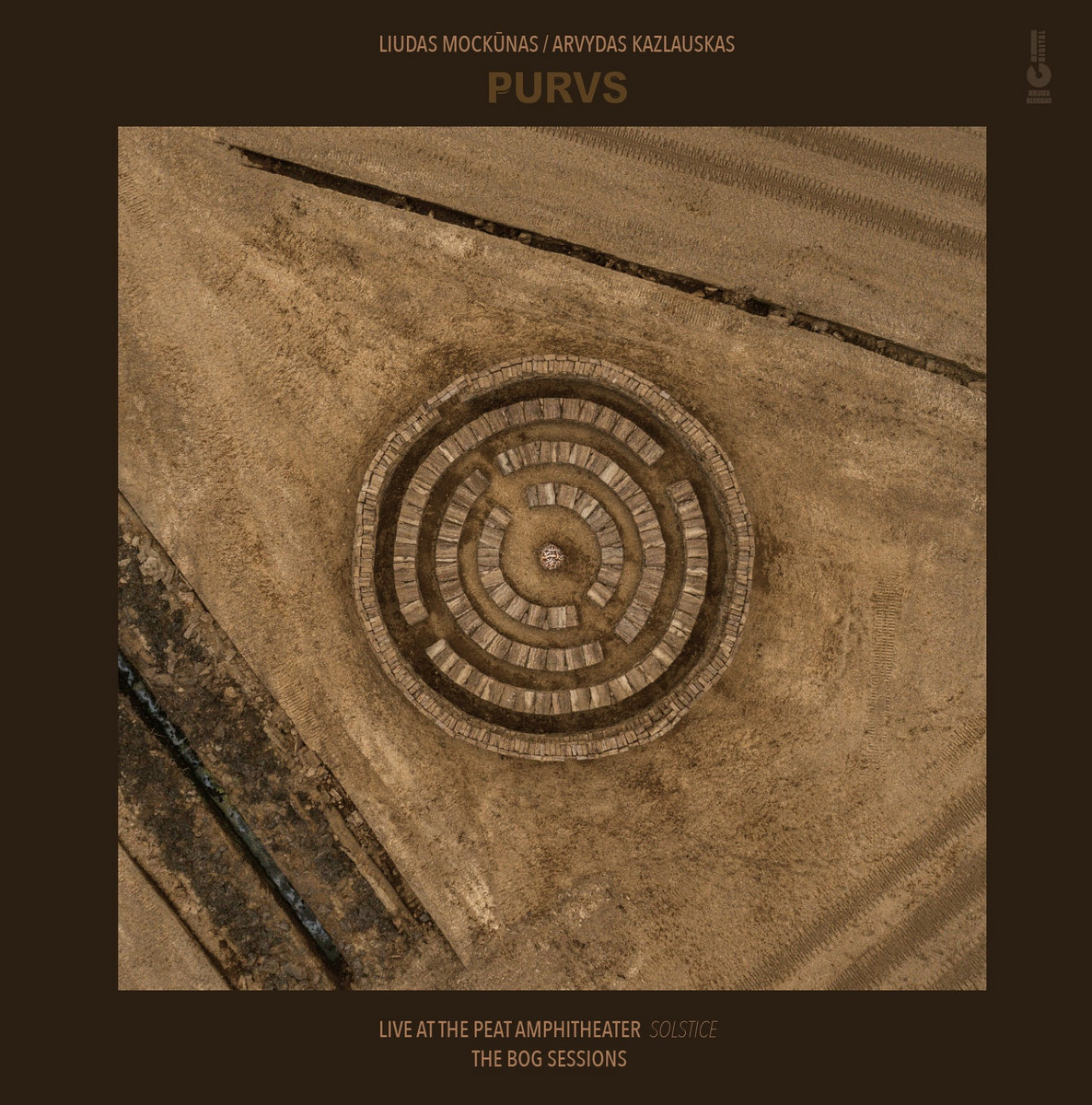 The Latvian label «Jersika Records» is offering its listeners a double LP «Purvs» (translated as «swamp»), which has united two Lithuanian saxophonists — Arvydas Kazlauskas and Liudas Mockūnas — especially for this project. The album is unique because the recording took place in a really unusual place — peat swamp, instead of a recording studio. Half of the album’s material is a recording session without the listeners present, but after it ended, both musicians invited the listeners to an evening concert in a nature concert hall, «Solstice» (Valgunde parish, Jelgava region) as well.

A round peat amphitheater was built in collaboration with an artist Jānis Gutāns-Grasis, who has managed to have quite a lot of experience with creating different nature objects on an international level. This special object, initially created in honor of the anniversary of the local peat extracting and processing plant, has already become a potential event venue for different innovative art projects and performances.

There are different free improvisation traditions in music. Free jazz is a term to which we often associate musician activities in the US that began around the 60ies of the 20th century, and the context of creative searches was often associated with the political context of that time. Kazlauskas and Mockūnas consider themselves continuators of European free improvisation traditions, which is in a way closer to contemporary classical music, where the presence of African elements, distinctive in terms of jazz, isn’t that tangible and relevant. It is well known that Poland and Lithuania, in the second half of the 20th century, despite the iron curtain, already could breathe in some Western avant-garde cultural breeze and become the center of an avant-garde musical expression of the region. Both saxophonists acknowledge the importance of their teacher Vladimir Chekasin (born in Russia but moved to and been musically active in Lithuania) both in terms of their individual artistic development and creation of the peculiar Lithuanian music scene itself.

We have to admit that the free improvisation aesthetics in connection to the music will bring a specific taste along with it in any case. That is created by a circumstance that the musical contents don’t get revealed through generally accepted connections between melody, harmony, and rhythm which, frankly put, make music sound musical. The pillars on which our musical knowledge is mostly built since we’re small (relationship of consonance and dissonance in harmony, regular rhythmic patterns) are broken and swiped away, and here you go, in need of searching for some other ways of expression — something new to stick to. What else could be the things that would turn sound complexes in our perception into musical thoughts and artworks created by human beings, instead of an acoustic noise that was created as a result of coincidence?

Key elements at this point are timbre and dynamics that, when put forward, become the main elements creating the music material. To not get lost entirely in the process of listening, one has to try to think in the most straightforward categories and notice the opposites. For example, loud — silent, fast — slow, consonant — dissonant, dense — transparent, and so on. One has to reflect on the things he’s heard, search and ask questions. Does something repeat? Does any of the musical thoughts evolve later on? If it does, for how long? An inexperienced ear might see the listening of such music as some hard work instead of relaxation. Yes, it works like that — avant-garde music isn’t meant for the «sissies», it demands active listening. The listener has to strain his brain himself, he has to be willing and trying to hear something in it (it would be appropriate to pay attention to the difference between the words «listen» and «hear» at this point).

This album is an excellent illustration for the demonstration of different saxophone timbres (soprano, alto, tenor, as well as rarely used sopranino and bass) and playing techniques. Seemingly impossible to get out of the instruments, beginning with bubbling, growling, whistling, beeping, up to the sounds typical to the gastrointestinal gas excretion process. The musicians had no fear of the animal-like, unpretentious reality depiction. Here and there, one can hear some metallic sounds that show us that there might have been something similar to percussion instruments in their arsenal. Thanks to the sound of the wind in the soundtracks, a unique atmosphere is created, which helps create a realistic presence feeling. This is a fantastic example of the outer environment playing a vital part in music content creation. If the same material were recorded in the studio, it would have a completely different taste.

Duo format has a special place in jazz music. The smaller the number of participants in an ensemble, the more significant challenge for musicians becomes varying their sound patterns. If the number of participants is bigger, the spheres of responsibility get divided, and each musician gets his own task to do within the band. When it’s a duo, everyone has to juggle in between different roles — be the «bassist», the «drummer», play the melodies, as well as do some harmonic filling in. To keep the listener’s attention throughout the whole performance, they have to try really hard and realize a significant part of their potential in terms of both their technical arsenal and fantasy. It might be a little bit easier for harmonic instruments (for example, the piano), which can create complicated textures and imitate ensemble play by many people on their own. In the case of the vocal or wind instruments, it becomes one of the most challenging tasks to do. Therefore, great respect to the producers of «Purvs» and the musicians themselves for daring to record an album for two saxophonists with 98 minutes and 42 seconds of music.

The listener can guess approximate contents, images, and themes of music when we see the names of the compositions in different languages. The choice to call the compositions not only in Lithuanian («Atavaras», «Duobe», «Drugys», «Gyvatyne»), but also Latvian («Taka», «Deja», «Zilās sūnas») really makes sense, since Arvydas Kazlauskas has been living in Latvia for quite some time, as well as knows the Latvian language pretty well, and the recording itself takes place in Latvia. Some of the names represent the Old Prussian language («Gilluwā» and «Strāuwa»).

In between all the sound patterns created with timbres and dynamics, the composition «Madla» stands out. It is the only one where we undoubtedly and clearly perceive harmonic information and thematic material, based on the melody, which evolves furtherfurther in the composition. Intonation content, built around B-flat minor pentatonic, and the way of playing it undoubtedly, point at blues as the presence of the style. The most attentive listeners will notice that the melodic material of «Madla», filled with blues intonations, appears once again in «Zilās sūnas», creating a kind of a thematic arch — reminiscence.

Some bright episodes do appear on this album from time to time. Considering further that this recording is a document of a free improvisation process documentation, it’s clear that an essential part of the total timing is searching for ideas by both musicians in real-time, which isn’t always that exciting to the listener. I found «Gilluwā» and «Taka» (especially beginning with 4’59’’) quite interesting. A silent culmination could be the soundtrack Nr.5 («Urwan»), where the process of developing the composition takes place in low dynamic graduation, reproducing touching, hiding. High register used in «Deja» throughout all the form, as well as timbres and microtones (to keep it simple, «wrong» notes), create a caricature of sorts. Some associations with a comical hero appear, the one making a parody on something. At the same time, this is the shortest composition, speaking of the timing. In «Turbs», an ostinato figure evolves (multiple iterations of the melody, rhythm, or harmony), which, appearing in the middle of the composition, leads the listener almost to its end. The most extended composition of the album is «Drugys», with nearly 12 minutes of music.

Having listened to this album, just like after enjoying some other free improvisation performances, I get curious. Has there been a previously prepared plan, on the base of which they’ve improvised? Have the names of the compositions been invented before they were played or given based on what was played? To sum it all up, I can tell that «Purvs» is extraordinary music, created under exceptional circumstances, made to be heard by special people in a unique atmosphere. I wish you pleasant listening — let’s not forget to open our minds and ears before listening!