Cellist Frederick Katz and his significance in jazz history 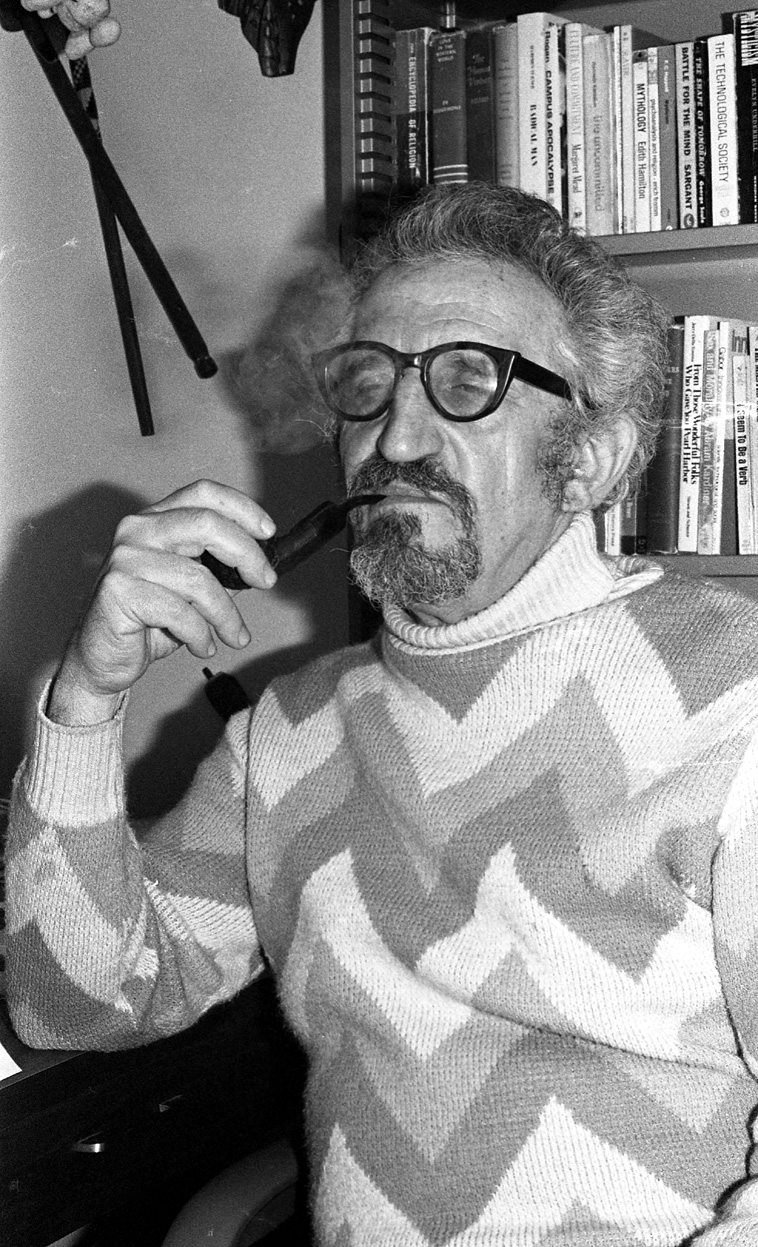 Frederick Katz or Fred Katz was a musician, composer, and teacher. Thanks to him, the cello as an instrument was widely used in jazz music. «CODA magazine» called Katz the «first real jazz cellist». Before Fred as well, for example, Oscar Pettiford used cello in jazz, but then it had a bass function, using the pizzicato technique.

Katz was born in New York in 1919. Coming from a wealthy Jewish family, his father was a dentist and wanted all his children to become musicians and be able to play Beethoven trio all together, which they also did. His father’s and mother’s ancestors were from Russia. Fred Katz began playing the piano at the age of nine, then began also playing cello, and he was a very gifted child. Studied at a famous cellist Pablo Casals and performed with the National Symphony orchestra at an early age. Fred mainly was playing classical music for a long time.

During the Second World war, Fred was an arranger of musical performances and event organizer of the Seventh Army in Germany.

Fred began playing jazz as a pianist, playing to a singer Lena Horne. Chico Hamilton was her drummer, this is how Katz got acquainted with Hamilton, which was a significant turn in his career. Chico told Fred that he would like to create an ensemble with an unusual instrumental line-up, and Fred offered his cello. When they rehearsed and understood that it sounds great together, «The Chico Hamilton Quintet» was founded. In the beginning, Fred was playing both piano and cello in the ensemble (primarily ballads), although during some breaks in performances, he began improvising with the cello.

He also gave lectures on music, anthropology, and religion at the California university. Fred Katz has lived a long life of 94 years. And until the end, he has played his cello every single morning before breakfast.

«Zen: The Music of Fred Katz» is a debut album of the cellist and composer Fred Katz, released by the «Pacific Jazz» label in 1956. Part of this album is classical music, written for jazz musicians, for example, «Suite for Horn» (for the saxophonist, flutist, clarinetist of «The Chico Hamilton Quintet» Paul Horn) and «Classical Katz». This composition is written in a passacaglia form for a duo of cello and clarinet. The second part is jazz music. That music was composed when Katz was studying Buddhism.

«Fred Katz and His Jammers» was released by «Decca» in 1959. One of the album’s compositions, «Dixie, Why Not?» was composed by Fred because he liked Dixieland.

In one of his interviews, Fred himself told that one of his most essential concerts was at his early youth years with a symphony orchestra, when he was mainly playing classical music. At that time, he was pronounced a concertmaster of a cello group, the orchestra was playing the 2nd piano concerto by Johannes Brahms at the Carnegie Hall, where the cello has a very important solo in the 3rd part. Fred was worried to death because he didn’t want to let both the conductor and the audience down, but the moment he began playing, his worries passed away, and everything went great. The audience applauded not only a pianist but to him as well.

Brief characteristics of his style of play

Fred Katz wanted to play the music that’s in his head, not only some compositions known by everyone. He used classical cello playing techniques — played both with a bow and «pizzicato», «sul ponticello», «arpeggiato» chord playing above all strings (he used this technique in his composition «The Sage», with the idea of this probably got from the Antonín Dvořák’s Concerto for cello and orchestra). He used to double brass instruments, play an octave higher or lower, plays double notes where one of the voices repeated one of the musicians. Fred made his rhythmic side more interesting and versatile as well, using some techniques of playing with a bow — playing «spiccato» in sixteenth, «col legno battuto» (playing with a wooden part of a bow, letting the bow freely move along the strings). He had a great swing technique.

In Katz’s playing, one could feel that he first learned to play the classical cello. For example, his «pizzicato» sounding significant differed from the one of Pettiford. Katz used a classical «pizzicato» technique with one finger. It created an exciting contrast between the bass and cello sound of the quintet. Fred felt better improvising with a bow instead of «pizzicato», so «pizzicato» improvisation can be seldom heard in recordings. Improvisation had to be adjusted to the ergonomics of the instrument, so he used free strings as much as he could in order to be able to switch his position. As he said himself, the most challenging part was thinking like a jazz musician while playing cello, after being used to reading the sheets and playing the music literally.

The tone of Katz was to soloist in the beginning, it was like that as a result of a strong pressing of his bow and frequency of «vibrato» movements. Later on, he found a balance between «bel canto» and African-American vocal style for his cello.

The clarity for his intonation and tone (Katz had a good technique of changing positions) was good and not so good. There was no clear «portamento» heard in his playing like it was with jazz violinists Steven Grapelli or Stuff Smith. Vibrato of Katz masked microtonal quality of blues scale.

Of course, Fred’s repertoire featured such compositions that suit cello and are better played on it — melodic ballads. Good examples of it are «My Funny Valentine» and his own Hebrew composition «The Sage» (where Hebrew roots of Fred Katz have influenced his music).

Katz and «The Chico Hamilton Quintet» in jazz history

Just the same as bebop was a reaction against swing, cool jazz was a reaction against bebop. Something calmer had to come in, like a chamber orchestra. During that cool jazz era, new instruments began playing their part in the ensembles — flute, oboe, cello. The sound became more delicate, extreme intrusive registers of brass instruments were used less. New rhythmical patterns began appearing in the compositions, polyrhythms, and classical music forms.

In the 50ies of the 20th-century mainstream jazz, classical music, rhythms of different cultures, and melodies all met within «The Chico Hamilton Quintet». The quintet had great success both in terms of popularity and finance. Katz was a significant member of it because cello made the quintet more popular. He also made using a bow while playing cello trendy in jazz. And a positive moment in using cello in jazz is that this instrument can play different roles all in one — melodic line, bass, harmony, rhythm. All of this can be heard in the quintet’s recordings. His colleagues were «Modern Jazz Quartet», «Gerry Mulligan Quartet».

Fred Katz’s compositions are a great legacy to jazz history and cello history. «Concerto for Jazz Cello and Orchestra» was first played by George Neikrug, one of Fred’s most favorite cellists, as well as a good friend of his. «Soul Cello» (1958, «Decca») is an album with modern jazz arrangements for cello and orchestra.

Freds Katcs is a discovery of mine. In my opinion, each cellist who is learning jazz history would need to learn about him. His input in jazz history was significant, but what was even more remarkable was his input into cello history. As the first jazz cellist, he’s an innovator and was a pioneer in some things that lots of cellists continued doing, the ones like David Darling, Mike Block, Lucio Amanti, and others. He will definitely become remembered as one of the main elements of the unique sound of the «The Chico Hamilton Quintet», as well as an author and arranger of numerous compositions who recorded many albums.

I think his music is easily perceived, calm, harmonic, and positive. What makes it more understandable for me is that some classical cello play techniques are used there, as well as his musical language and form often summon with chamber music, and often popular music as well.

I can only admire his technique and virtuosity, which both are a result of his talent and hard work. There are not a lot of recordings of him playing classical music left, but when I’m listening to his jazz recordings, I don’t have the slightest doubt that he could play classical music great as well. Fred’s jazz playing isn’t boring at any point because he often switches to another function in a band, as well as uses a wide range of technical tools. The themes of his compositions are also based on the contrast between each other, and so a myth gets dispelled that cello is an instrument that’s meant for ballads and sad classical compositions only.

While listening to Fred’s recordings and an interview with him, I got the impression that he’s not only a talented and virtuoso cellist but a great kind person as well. For example, while he was young, his family used to put food baskets at the doors of poor people and run away so that they don’t know who these nice people are.