On the edge between diss-hop and fateful melancholy 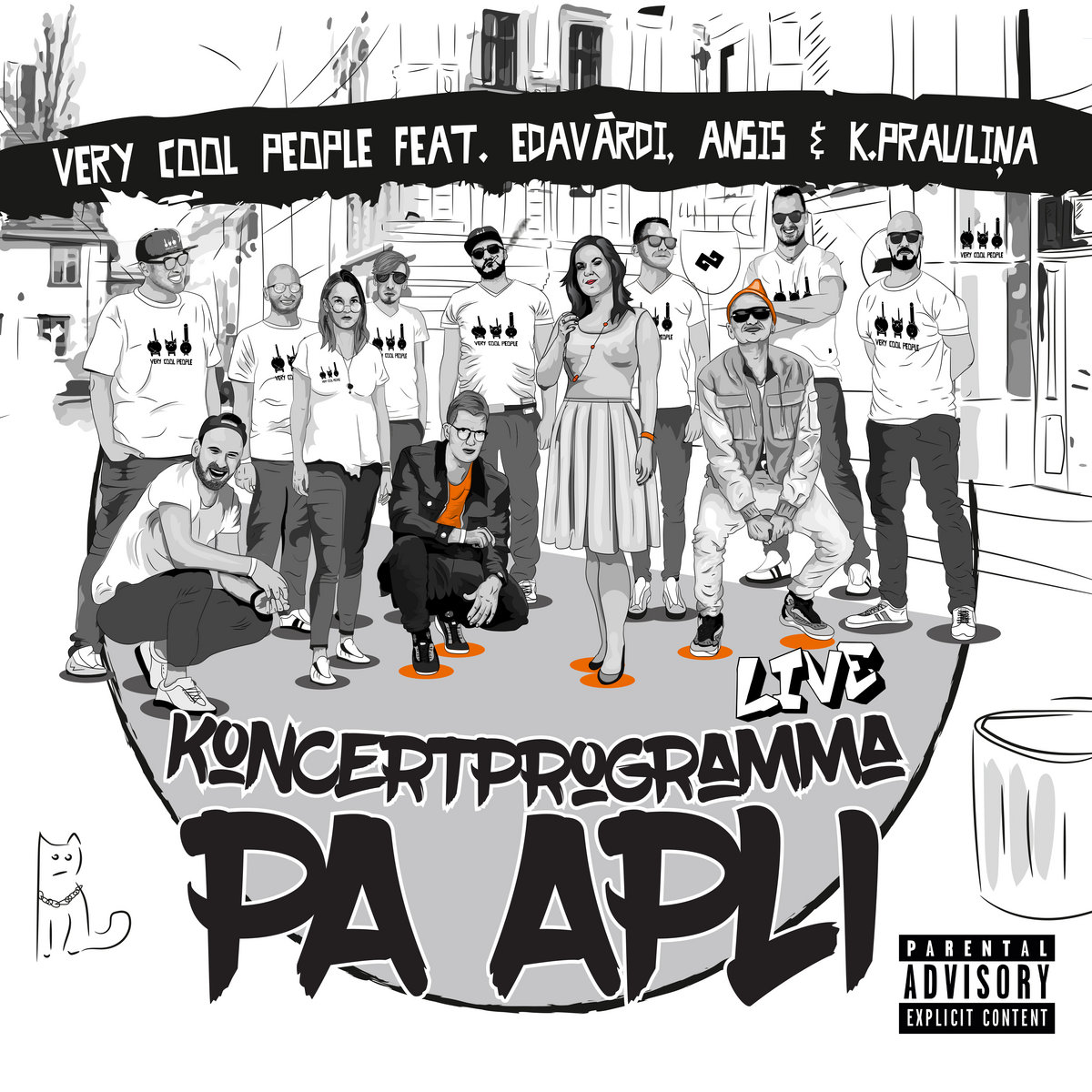 The process of reviewing this album came about somewhat differently; it was sent to me to my mailbox in this antiquated format known as a compact disc, which included an additional bonus track not present in the digital releases. Snide remarks aside — in the year 2020, the only place where I could listen to a CD is my car stereo, which evidently was a perfect setting for listening to the uplifting tracks of this album. The lively and dynamic vibrations were just the jolt I needed while breezing through the brisk morning traffic on my way to work and to ease into the comfort of my driver’s seat while pondering over the more melancholic and lyrical parts upon reaching the highway.

From the first to the very last track, the listener is invited to an adventure along with the lavish lineup of VCP, which this time around is accompanied by the energetic Latvian rap duet of Edavārdi and ansis (yes with the lower-case a) as well as a regular on the bandstand — singer Kristīne Prauliņa. Usually, when listening to new music, I can’t but help myself drawing comparisons with music I’ve heard before, the lively rap duet in its boldest and boisterous moments reminded me of the American hip hop legends «Beastie Boys,» but in its more self-reflective and wistful ones — the Latvian pioneer Gustavo, nowadays known as Arstarulsmirus, who would also sometimes present his misfortunes in a more satirical way. All of this vast instrumentation and rap is tied together with the vocal performance of Kristīne Prauliņa, which underlines the boisterous declamations of the rappers such as «The struggle is big as your mom» or conversely gives a more melodic backdrop for tunes such as «Viss ir Sarežģīti» (Everything is complicated). And last but not least, the collective of Very Cool People serves as the musical vehicle for the artists mentioned above to deliver all of this wrapped in lush horn section arrangements that pulsate together with the outstanding rhythm section of the band. All of these pieces fit together just perfectly without interfering with the rap nor the lyrical gospel-infused vocals.

The track which sets apart the physical copy of the album from the rest is a cover version of Kool & the Gang’s well-known piece of the same name. This track serves as the appetizer for what’s to come just around the corner, the sound of the album, which encompasses a fusion of rap & funk as well as hints of rock and metal. Highly energetic, the tight interplay between the rhythm section and horns, spicy rhymes and daring vocalizations, everything in just the right amounts!

Ruminations of money are anything but just a little bit of the modern every-man mind; money dictates how we structure our priorities, often conflicting with the true expression of ourselves and sacrificing it for financial stability while becoming slaves of the next paycheck. Not everyone is able to relinquish worldly pleasures in the pursuit of their true calling. The lyrical message is conveyed in a coarse blend of funk and rock which culminates in a blistering horn solo shout section.

The listener is lulled in a false sense of a ballad while unexpectedly in comes the «Riekstu Armija» («Army of Nuts’). The fiery speed of the rapping gave me no other choice than to listen repeatedly before I could wrap my sluggish ear around the lyrical content of this tune. The main motto of this song is to be as explosive and in-your-face as possible and, to quote the duet — «put dynamite in its place.» Tune wraps around with the «do the nut» dance, which evidently works better as a shout than a dance routine as the dancers themselves seem to have a unique interpretation of it. (maybe that’s the point?)

There are some combinations of things that are more than the sum of their parts, such as wine & cheese or coffee & cigarettes, and so is a rap verse paired with a lyrical vocal section. The pairing sets a stark contrast between the two sides of the song’s protagonist/antagonist, who, on the one hand, is a loving father figure to his little daughter as he lulls her to sleep and on the other is a hired gun or a hitman for some morally ambiguous organization. The band’s tightly knit groove helps to elevate the suspenseful atmosphere to a greater level, withholding just enough before the retreat to the very catchy and lyrical chorus, which erupts in a grand crescendo with the wind section in its final round.

«When everything seems to be going right, it means that something has to be wrong» is a line that resonated with me since the first time I listened to this track; it is often valuable to take a step back and take stock of yourself to assess your priorities and shortcomings in a truthful manner, which, when noticed, sticks out like a sore thumb. Although I consider myself a privileged person with mostly first-world problems, this tune’s message hit me like a bus. Isn’t it what art and music are for? To make us feel something…? The live performance and the tangible truthfulness in the voice of Edavārdi left a lasting impression on me and cemented this tune as one of the favorites from the album for good.

Like many songs from this live album, this one as well, in my opinion, exceeds the source material due to its rich arrangement, which helps to elevate this tune to a level where it is easy to imagine a rampaging audience bouncing along with the beat. To «buff your karma,» as this tune suggests, is a concept which I have grappled with, which essentially is mentally monetizing any and every good deed in a way that could be redeemed in the future from the bank of fate watching over you. To put it bluntly, if you want a solid stock of good karma, don’t do anything to tempt fate! Wait out the red light on the sidewalk, toss your cigarette butt in the trash, or don’t wear Crocs as the author suggests.

A little silly and comical retreat from the severe and melancholic mood, which contemplates the relationship between struggle and your mom’s size. With its heavy-handed rhythms and power chord infused musical temper, this diss track reminded me of Beastie Boys yet again, which squarely puts this tune in the hard rock/metal genre with one foot. This might just be the right tune to blast full tilt from your car with open windows in your small local town center.

Which ‘guy’ are you? This tune throws around so many archetypes that you’re bound to relate to at least a good half-a-dozen of them, this is the masterful lyrical device of this tune that reminds us all of that one guy and that particular thing that he’s known for. Eventually, you realize that you’re a kinda little bit of every guy. The powerful arrangement successfully utilizes the wide register of the bite-size wind section, among which the baritone sax stands out with its low-end rumble. The horn parts converse nicely with the rest of the lineup, creating a larger band’s faux presence.

This one calls out to the patriotic Latvian hearts, the ones who yearn for freedom, to wipe off the footprints of corrupt men, silenced for decades under the will of other nations. To raise your voice is to invoke the spirit of resistance, which sparks the grass-root movement that eventually leads to change. My hat’s off to the arranger who managed to pull off a sound encapsulating this feeling of fiery patriotism. The pulsating rhythmical texture breathes this tune full of marching, dare I say, military type of atmosphere, which just elevates this tune’s message to a whole another level. This is definitely one of the highlights of this album.

Finally, a song that gives the music itself center stage starts with a melodic chorus, which sets the tune’s mood. Although most of the album is highly introspective and melancholic, or on the other hand, loud and in your face, this song finds a happy medium. With a chorus which goes, «This day is neither bad, good nor awful,» you can’t help, but to get a sense of contentment, a feeling of being fine with the way life is, even in its most dreary and unremarkable moments.

A seemingly personal piece of music, as if addressed to a certain someone who would recognize themselves as the recipient of this message. A contemplation of bad choices that inevitably lead to worse ones. False hopes and broken dreams, delusions of grandeur, followed by predictable reality checks, cashed in, one regret at a time. The angry and spiteful music just seems to serve the sour message in a more personal manner.

The young and the rich, without a care in the world, what does even bother them? Raining dollar bills, cheap thrills, and habits that kill. This one seems to play on the stereotypical hip-hop superstar who can’t help but flex their wealth. No problem that cannot be solved by throwing your money at it. What is there to say about the music that I haven’t said yet? The touch of the ABBA quote is just the cherry on top of the delicious cake.

13. «Viss Ir Sarežģīti» (Everything is complicated)

This chorus is THE hook of the hook of the album; it was stuck in my ear for days. «Everything is wrong, it’s all wrong, but in the end, it’s all gonna be OK.» It is just a cry into an indifferent universe, which sometimes just seems to tie your shoelaces with one another just to trip you and watch you tumble miserably. Don’t we all feel that we have no agency and the world is out to get us from time to time? I think the world relatable describes most of the album, and it hits home!

Perhaps one of the most recognizable songs of this particular band’s lineup premiered as a single. And how appropriately a song like this is left as the last one, incentivizing me to take this CD for another spin, and then some. I’m confident that this album will remain in my car’s CD changer for however long I’m going to have a car with a CD player. This just might be one of the best albums of the year, a unique amalgam of different very talented Latvian musicians just doing what they do best. The production quality is as outstanding as the performance itself, considering it was all done live on the stage. A definite recommendation to any music lover, Latvian or otherwise!