The beginning of a music manager’s path 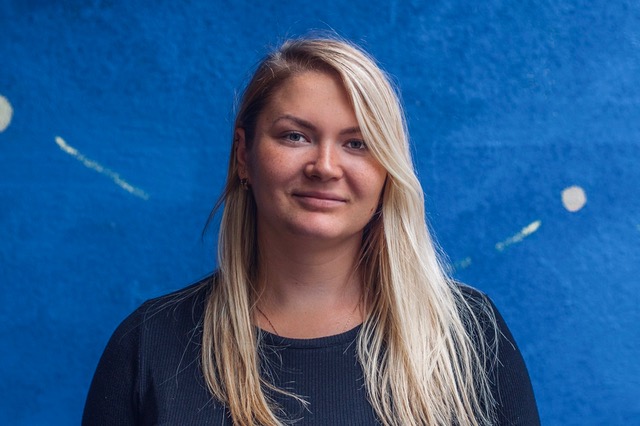 Anda Vaičekone is a project and events coordinator in Tallinas street quarter in Riga. Administrative organization, which overlooks the life of a new, modern, and popular creative quarter, hosts many contemporary and jazz art. So one September night, we met to talk about jazz music’s unique traits, actual news of the quarter, Anda’s road until music management, and things a musician has to do to get noticed by the event managers.

Everything began with music. Some things got together just like pieces of a puzzle — now, looking back, even illogical things seem logical. When I was small, my mother wanted me to do basketball, but I remember I took her hand, brought her to a music school myself, and asked her to sign me up. I had a charming teacher at the music school Kristīne Circene who motivated me a lot — I was a lazy one with huge potential. I was studying with a thought I’ll graduate and will never do anything connected to music again, and during the last semester suddenly realized this is it, that I can’t do without music, I need that. So the only option was Riga Dome Cathedral School — why wouldn’t the only option be the most difficult school to get in…

And so I didn’t enroll. Didn’t pass any of the entry exams. My solfeggio was zero, and the piano also wasn’t good enough for the school level. So I left my hopes and didn’t know what to do next, but Iveta Grunde called me — a great human being and a teacher — and told me if I could come to Riga tomorrow, Maija Kurme would hear me over once more, they’ll think what to do next. She said: «Someone is fighting so that you get here.» I am unbelievably grateful for that, I don’t know if I was even worth it, but someone fought for me. I was studying academic vocals, once almost failing, but I did everything despite it. Despite myself, despite the others, just wanting to nail it. And despite everything, I graduated from the RDKS. It wasn’t easy at all; my biggest friends and supporters were my teachers.

During the last year at RDKS, one evening, I went to «Hāgenskalna Komūna» with a coursemate to get ourselves a beer, the first month when they were open. And just the same evening, we decided I’m their new culture events manager now. And it was that very moment when I realized that the stage lights are not meant for me, so I was working at «Komūna» as a manager. It was a wonderful, absolutely no budget thing, and we have really done a lot together with Dāvis Stalts.

There’s quite a lot of cultural events going on right now. It’s really much. So the contacts are essential because organizers and venue owners share information everywhere, and the channels used are also the same. So spreading the word is also either luck or financing — either it shows into your information field, or it doesn’t. Many friends, performing musicians, and artists bring a crowd — it happens in any of Riga venues. There are no people who know everything about all of these venues; many things remain hidden, unknown. Maybe you haven’t heard anything about the venue, but the artist still brings the listener there — it’s how these connections evolve.

Jazz music in my life began at RDKS. The thing that attracts me the most is the atmosphere and jazz aura everyone is feeling. There is no such thing in academic music. There is the aura, but it’s an entirely different aura. The academic collective is sometimes brutal, non-friendly, and with competition within the ensemble. When you do jazz, sometimes a more prominent musician than you can give you a helping hand, and coursemates really support each other. Playing in a jazz combo also creates it all because they all have to interplay and look at each other. They have to feel each other. When I was studying, it seemed to me that all jazz students were friends of one another and that friendship was overwhelming; there was enough for everyone.

I’ve also met some incredible people in my academic environment, they helped and supported me, but this is quite rare — I have encountered considerable competition. I like to stay calm, friendly, and with no drama. And overall — we all have to love ourselves and respect ourselves.

While working at «Hāgenskalna Komūna,» I thought it was cool that I know how the artist feels, what he needs, how to make contact, which is really important to the manager. And, if required, one could also turn the sheets, because you can read sheet music. And then I enrolled in the Academy of Culture, graduated, and in May began working in the Tallinas street quarter. I’m not the author of the idea of the event, but I’m a great supporter — when applying for this job, I said it’s essential for me to let jazz into this quarter. And this isn’t just our job — «Tu jau zini kur» concert hall and some other corners of the quarter sometimes host jazz concerts and jams. Right now, jazz sounds here because it’s a quality mark.

I’ve been lucky until now on because, within the scope of my work, all musicians have been oriented towards collaboration and problem-solving. And there’s also a personal moment — it’s always a pleasure for me to work with jazz people, be near them and get to know new jazz musicians. Here’s some financing, and we, as a team, can invite musicians who only play for money. When I was working in the «Komūna,» I was gladly offering my coursemates an opportunity to play with a jazz ensemble, and I love the idea of giving a chance to really young ones — the ones who really need those gigs. I’m not succeeding with it right now, or maybe I just lack time.

In order to get to play at Tallinas street quarter, it would be essential to create your own product, to have the quality, and live along with your time. Contemporary is nowadays or the future, and you can never predict what awaits you in an hour. It works just the same with contemporary music — you have no idea what feelings it can evoke in you. So you need a product created by yourself, that is contemporary, and then you could just write us an e-mail.