Searching for the center in between genres, styles, and cultures 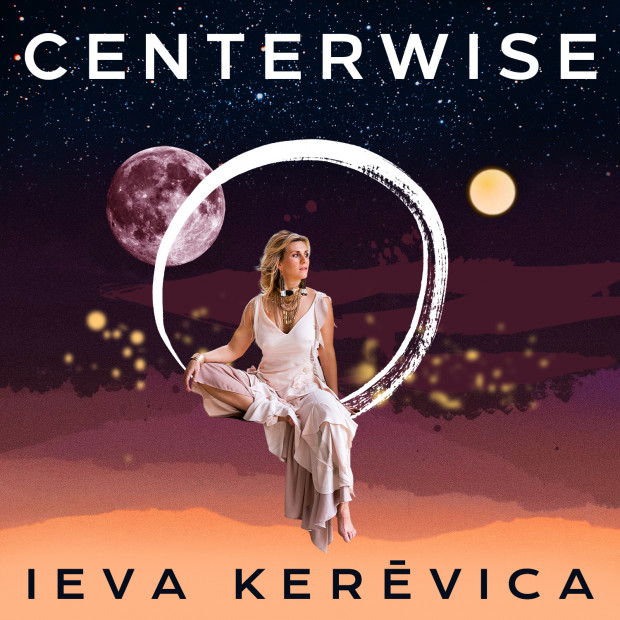 Ieva Kerēvica has been a part of the Latvian music scene for a long time now, and only now, this summer, has she finally released her solo album. The saying «Chi va piano va sano» is applicable in this case — the new music by Ieva and her team has surprised with some brave and artistic choices. As a result, our non-academic music libraries have gained a new exciting and refreshing addition.

The name of the album, «Centerwise,» hadn’t been chosen from one of the tunes included in it. Still, it does give us, the listeners, a hint that this creation is advised to be listened to as a whole, not in separate tracks, not trying to divide it into different stories with different meanings.

As a listener, I am glad that while creating this album Ieva was brave enough to be herself and is not afraid to show her unique self-expression tools. This album reflects her musical personality that has been slowly developing while living through all the stages of her musicianship.

The amalgamation of various stylistic elements seems to be the main factor to characterize the «Centerwise» album. Although nowadays the modern tendency to combine multiple stylistics in one album isn’t new anymore, in the case of Ieva’s album, it is nevertheless interesting because of the specific elements she decided to choose to combine. Ancient Indian Sanskrit text quotations (mantras) and the lyric excerpts from Latvian, Livonian, and Latgalian folk songs create the main idea of the album’s content. Looking from the image and the theme prospects, we can conclude that the composition titled «Bolero LV» and «Barcodes,» that present us with musical quotations of the famous melodies by Ravel and Guiana, don’t really fit the whole picture. But if we forget the origins of the abovementioned melodies, they somehow start sounding in tune with the rest of the musical material presented in the recording.

All the musicians participating in the album have demonstrated a compelling performance. Kristaps Vanadziņš is complimenting Ieva Kerēvicas powerful vocals on the piano, Dāvis Jurka on saxophone and flute, Staņislavs Judins and Jānis Rubiks on bass guitar and double bass, and also Krišjānis Bremšs on drums. From all the instruments involved in the album, we can mostly hear Vanadziņš and Jurka during the broad improvisational sections. Ieva Kerēvica is mostly improvising in the free jazz style, using her timbre, dynamics, and rhythm as dominating elements. It would be interesting to hear Ieva improvise more traditionally when a soloist improvises over more or less complicated chord progressions. We also have to acknowledge the quality of the work done by Reinis Kārkliņš with recording the album, which allows us to enjoy the music without any distractions.

A significant impact on me was left by the composition named «Tumi» when I listened to this album for the first time. In my opinion, this composition turned out very intricate, with a fascinating solution to the overall structure of the form. Each next part of the tune comes as a surprise because it doesn’t follow the logical path paved in the previous one; the composition doesn’t have any reprises or repetitions in the traditional sense of these concepts, none of the musical material is being repeated in the tune. An episode when Krišjānis Bremšs comes to the foreground with some complicated drum rhythm pattern has to be acknowledged as well. And also, the stylish timbres that Kristaps Vanadziņš chooses on the keyboards, and a low-frequency rhythmic baseline by Jānis Rubiks complement the tune hugely. From all the songs included in the «Centerwise» album, this composition is definitely the most modern concerning the sound palette. This is an achievement of the three musicians mentioned above.

«Om Gan Ganapataye» is a refrain of sorts — a mantra that is being repeated throughout the whole album, first appearing as a short individual track, then the fifth, and that as a seventh, but this time in a more expansive, extended form. Our own Latvian culture appears in the album in the compositions «Joda Joda» (Livonian lyrics), «Bolero LV» (Latvian lyrics), and «Dzeguzeite» (Cuckoo — Latgalian lyrics); the last tune also serves as a quiet culmination of the album.

The composition «Mantra» also seems to be pleasant to the ear. The sixth composition in the album has a very creatively composed thematic material, followed later by Ievas extended improvisation and is simultaneously being enriched by the sounds by Dāvis Jurka’s saxophone sounds. There’s a surprise in the middle of the composition when suddenly Ieva is being left alone with Krišjānis, vocals and the drums, to engage in an episode that is a reference to an Indian tradition of imitating complicated rhythmical figures, that are usually played by traditional percussion instruments, by the voice — konnakol.

I believe that every listener will be able to find at least one episode in the album that he will want to listen to again, since «Centerwise» doesn’t have a single dominating mood but rather is saturated with multiple different ones. «Centerwise» would mostly be enjoyed by those listeners, who aren’t intimidated by somewhat aggressive, and sometimes even avant-garde musical expressions. There’s also a cozy place to be found by those who are interested in a good-sounding and ingeniously composed tonal thematic material with colorful harmonies and rhythms. I am curious to listen to this music in a real-life situation — a concert. The tunes have a wide dynamic amplitude, from tranquil and translucent parts to massive and intensive sounds. These extended improvisational parts we hear in the album are more commonly known to be played at concerts rather than in albums. I suppose that «Centerwise» would sound and look good in a non-traditional space, where it would be possible to use additional elements of scenography, like decorations, light projections, etc., that would help to recreate the atmosphere of a magical ritual. I wish Ieva Kerēvica and her team a successful future work in further developing the material we hear in the album, and I will be waiting for the results eagerly!