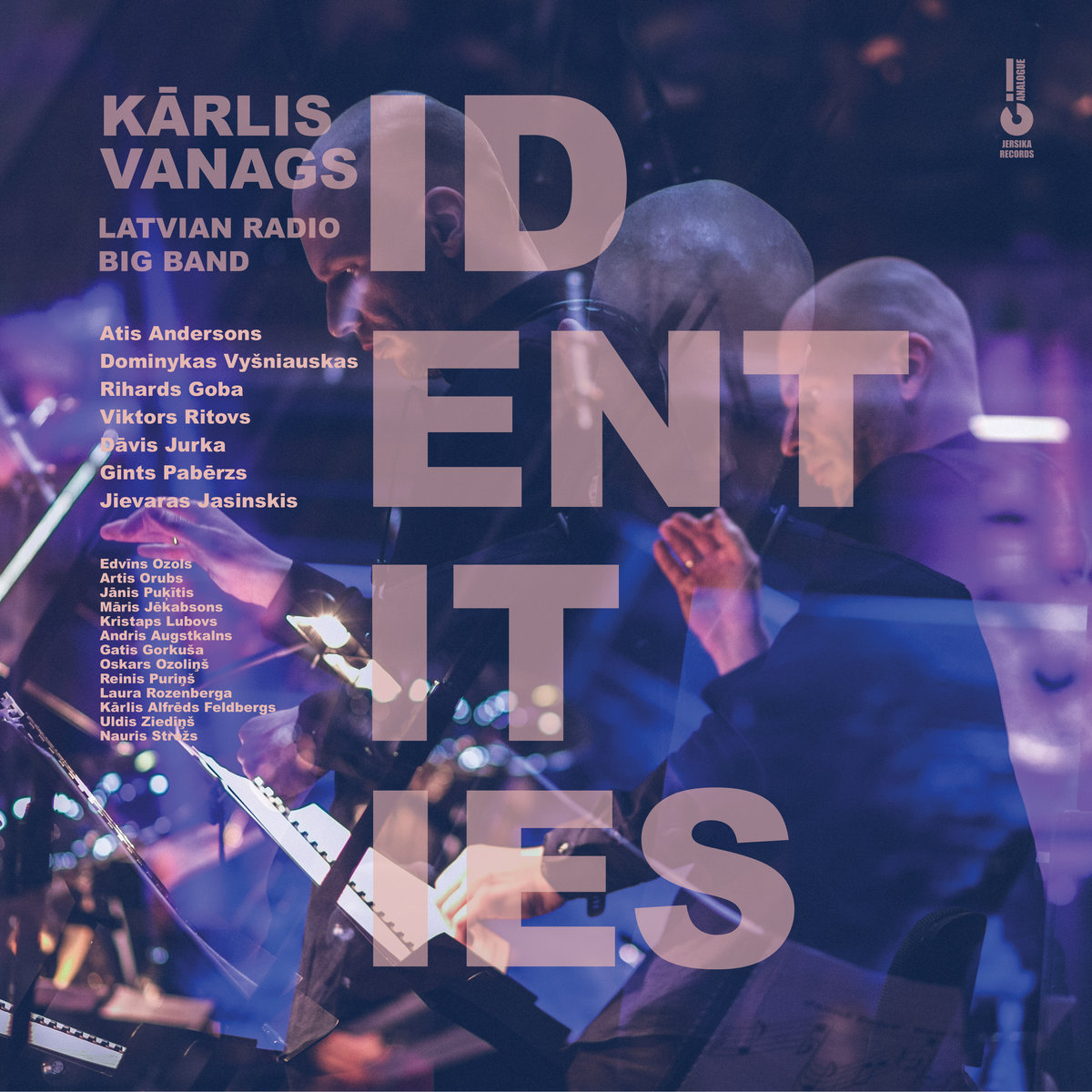 The uncertain times we are currently living in have produced quite a few new albums. One of those is a result of the collaboration between «Jersika Records» and Latvian Radio Bigband. The album titled «Identities» consists of compositions by the big band’s artistic director Kārlis Vanags. The recording took place in January in Spīķeru koncertzāle with the audience present. I, unfortunately, wasn’t able to attend. It is important to note that this album has been recorded at a live concert using analog technologies – a tape recorder; the music was released on vinyl.

Several guest artists had participated in the recording of the album. One of the artists is pianist Atis Andersons, who recently has become a Hammond organ aficionado. You can hear him mastering the instrument and showing his fantastic technique in the very first composition named «Self Esteem,» where he is also one of the main soloists. The switch from one style to another, from swing to funk, in the solo part is so flawless that sometimes it is hard to notice the exact moment it happens.

The second composition, «New Life,» surprises with its intro from the first seconds. A sound of a fizzing stream comes to mind when you hear the woodwind instruments in the very first bars of the tune. The later-on added brass instruments create a cloud of sorts that morphs into an entirely new entity when the Afro-Cuban rhythms come into the picture. The theme sounds complicated in the sense of technique, but the guitar and tenor saxophone manage to play together as one. The tune ends with a vast and bold full stop. Did the new life find its way into this world…?

The next composition is titled «Hopes and dreams.» Here the overall mood of the solo parts changes drastically with each soloist: the peaceful solo of Viktors Ritovs gets smoothly overtaken by more aggressive, active, and faster pulsations of saxophone solo by Dāvis Jurka, which in turn leads the tune to its final part, keeping the mood of the music as intense as it is during his solo. The piano solo is also spiced up with a fresh and unusual surprise from the big band musicians – singing. The musicians gradually start playing their instruments again, and only after a while do you notice that they aren’t singing anymore. A very creative idea and successful implementation!

The B side of the vinyl starts with a composition that goes by the title «Priorities.» It begins with a monotone movement of sixteenth notes on the snare drum, a wind instrument section plays syncopated rhythms on top of that, and suddenly there’s a piano that comes in with a glissando that at first reminds the part of a harp. Lower register instruments play in unison some new musical material as soon as the main theme is being played for the second time. New themes gradually multiply, and soon the music becomes full of beautiful polyphonic lines. Sometimes it becomes hard to hear the soloist when the wind instruments come in to play compings. The improvisation is being cut off, and the tune ends with a very short reprise from the theme’s beginning.

«Inner Voice» is a two-minute-long composition that serves as a bridge from «Priorities» to «Challenges.» A piano solo can be heard throughout the tune. This reminded me of a composition «Promenade» by Modest Mussorgsky from a suite of ten pieces, titled «Pictures at an Exhibition.» This composition connects two other compositions. Maybe it would be a good idea to insert various such bridges in between other pieces as well?

The next composition’s overall mood, «Challenges,» is slightly gloomy, but the theme performed by a duo of a soprano saxophone and guitar brings some light and brightens the atmosphere. In the middle of the tune, we can hear a stunning and tonally accurate coral performed by brass instruments, which is later overtaken by the saxophone section. There is a definite wish to listen to the coral once again at some point in the tune. My wish is being granted by the end of the composition when I once again hear the same soft coral. Just as before, the relationship between the soloist and the compound group seems slightly unbalanced. As the dynamics of the music grows, it gets harder to hear the virtuously played soprano saxophone solo by Gints Pabērzs.

Just as it is stated in the title of the composition, «Belief,» I could hear the faith in the first bars, that are played in the rhythm of funk music, but then gets overtaken by a somewhat cumbersome swing solo part, where once again Atis Andersons plays Hammond organ. It befits the last composition to have more than one soloist, and this tune isn’t an exception, so here we hear a soft-sounding solo by a guest artist from our neighboring country – Lithuania. A delightful solo is performed by a trombonist Jievaras Jesinkis. There is a very long glissando passage at the very end of the composition that results in a wide tutti chord.

All in all, this album reminded me a lot of Bob Mintzer and his big band’s sound – if I hadn’t known who played in this recording, I would have never guessed that these were Latvians. I enjoyed the performance of both soloists and the big band a lot. The notes are taken precisely in rhythmical group play, and the phrases’ completion is in sync. At some point, this union made me question if there really is a big band, or instead, it was a smaller lineup that performed because of the instrument groups that played so well together that they sounded one. Each wind instrument section’s leaders, the firsts, have to be properly acknowledged: Andris Augstkalns on the trumpet, Laura Rozenberga on the trombone, and Dāvis Jurka on the saxophone.

Once more, Kārlis Vanags has proven that he is a wonderful saxophonist and bandleader and a marvelous composer and arranger. He has a deep understanding of how the big band has to sound and what it is capable of. I could hear modern and sometimes complicated harmonies throughout the compositions, making the album sound fresh and up-to-date. I have to thank Kārlis Vanags and the big band musicians for such an outstanding performance, and since I am a huge fan of big band music, I enjoyed this recording even more. And even if you aren’t that fond of big band music, you can also try listening because of the aforementioned unity of wind instruments that creates a sense of lightness in this music. I would say that this album is a manifestation of professional musicianship!

In conclusion, I would like to express my gratitude to «Jersika Records» and Mareks Ameriks for this undoubtedly significant input into the perpetuation of Latvian jazz music.