Five moments of confusion in a maze of the sound 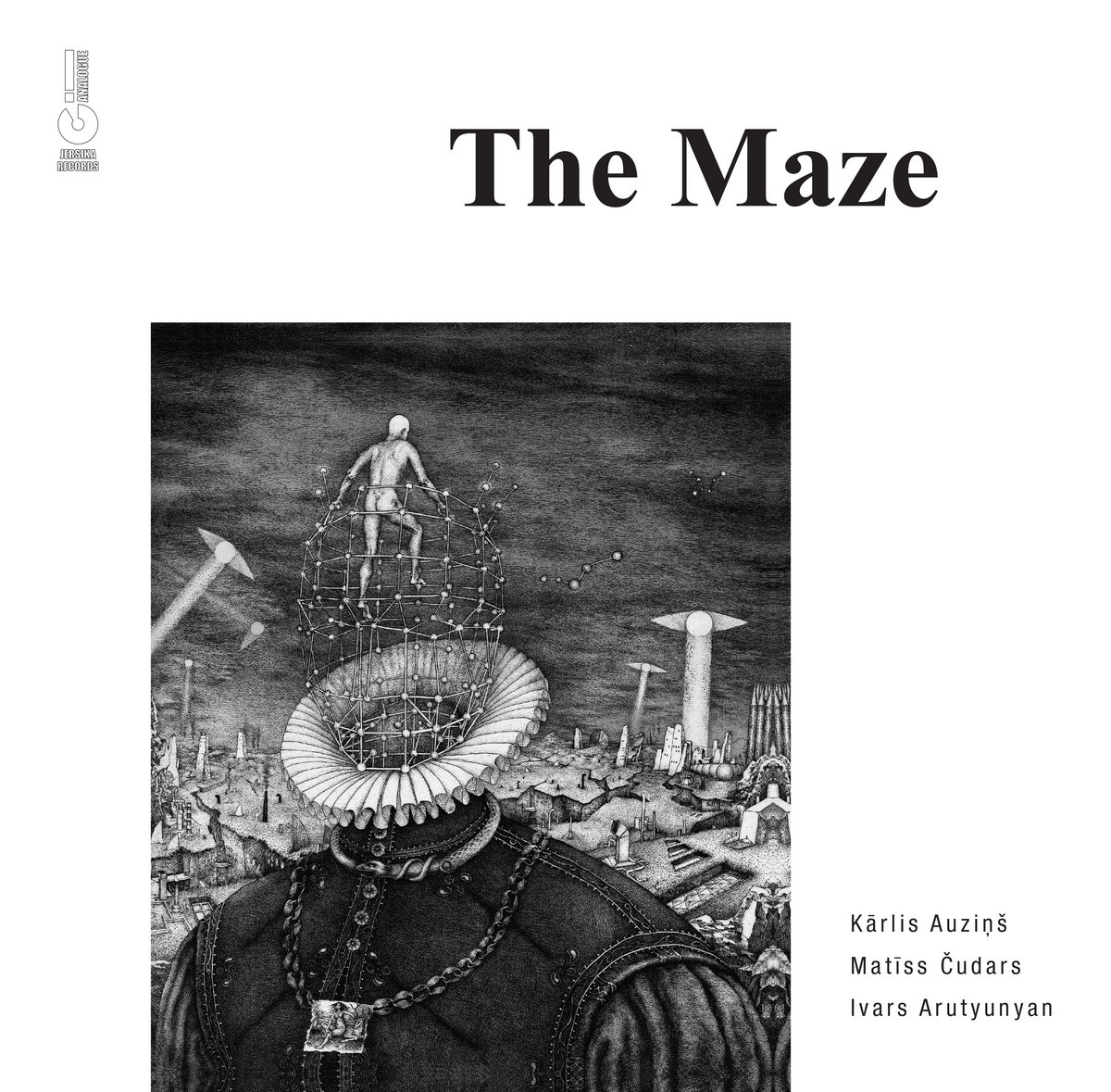 In our modern times of computer games, phone apps, and the world of internet streaming, the good old maze hiding in an abandoned amusement park or on the grounds of a derelict castle has long become an ancient artifact. Do you even remember the last time you tried to find a way out of the woven paths and tunnels in between the walls made of live brush?

In their latest recording, the trio (Auziņš, Čudars, Arutyunyan) are continuing to head along the same route as in their debut album “Baltic” (2018). Although the course is the same, they divide it into entirely opposite directions, which explains and suits the album’s name – “The Maze” perfectly. In truth, the compositions in this album are named in various languages – some in Latvian, some in English, that might signify the wish to dig deeper into the meaning of the selected words instead of targeting a specific audience. Also, one has to keep in mind that the name “Maze” has various implications – confusion and consternation as a state of the psyche. Also, the compositions are separate from one another, instead of being five parts of one suite.

Although all of the musicians had found their way towards the Latvian contemporary jazz scene through similar paths (from Riga Dome Choir School to Conservatories of Amsterdam and/or Copenhagen, through different collaborations in Europe and the Baltics) and had played in various combinations, Kārlis Auziņš (saxophone), Matīss Čudars (guitar) un Ivars Arutyunyan (drums) in this specific recording can create a story based on duality – the labyrinth of the sound confuses the listener not only with the ambivalence of its genre but with the confrontation of different personalities and characters in one single tune. In this recording, one can find a classical jazz drum set with a very detailed cymbal work, as opposed to that one can hear rugged ostinato, more common in post-rock guitar music, and all of that is topped off with musical patterns created by a free jazz saxophone; together they create musical dialogues, experiments, and jokes that more often than not are being cut off just as soon as they reach the most exciting place, that makes one think of this album as of a note pad filled with sketches left behind somewhere on a beach by an artist, that had run off for a swim or to a hotel room to pick up a chilled bottle of lemonade.

The chosen media format – a vinyl EP with two more extended compositions on one side and three concise ones on the other – hints at perceiving it as a very thought-through idea, a puzzle, or a coded manual of further use. In the age when it has become quite simple to publish digital recordings of unlimited length and to present those as singles from an upcoming album or video clips for a Youtube channel, the choice of the physical carrier, especially vinyl, is considered to be a luxury (and it is essential to note that the recording has been created using analog technologies without sound editing), and now because of all above mentioned the form is influencing the concept of the content even more.

Even if a two and a half minute tune played by professional jazz musicians can easily be stretched to a half-hour long one with the use of improvisation, these compositions are being interrupted in the exact spot where they were intended to be, which creates a confusing cross-genre phenomenon when the composed and improvised music are crossing their paths and start interacting. It looks like the music composed using improvisational music and jazz improvisation as a composition technique or a tool is a way for modern jazz professionals to try and break the bonds of gained education and cross the line of the usual quality control criteria to create something new and be able to surprise themselves.

As much as I got the chance to see the trio’s video recordings, I have noticed the musicians tend to stand very close to one another, not being untrusting of the sound control tools but instead indulging in the need to feel the sound vibrations produced by each of them. At the same time, this is not your typical live jazz band; the instruments are being changed often enough – from a tenor to soprano saxophone, then suddenly an engorged sax flute (or whatever it is, but it sounds like a custom made toy), electric guitar with all necessary sound adjustment pedals, classical drums and another toy – metallophone of Glockenspiel. The album’s opening track is an unknown – a composition “X” starts with an etheric intro that is soon interrupted by a nervous guitar rhythm that is familiar to us from the previous album “Baltic.” Matīss’ guitar is not a classic jazz guitar that you could imagine hearing in American or Scandinavian jazz music. Some parts of the composition somehow prepare the listener to observe the opposites and, at the same time, confuse the listener, making him feel as if this adventure might be relatively more extended than it is in reality.

The next composition, «Kontemplācija» even if it is the longest one in the album, is the most concise in the sense of content – it reminds of the interest Kārlis Auziņš harbors towards the use of the saxophone and the production of different sounds, that can be heard in his solo album «Oneness and the Transcendent Truth» (2019). However, in this recording, it is more of the breath itself and being conscious of it, just as it is often found in different meditation techniques aimed to develop one’s concentration skills. Thus far, I haven’t been able to completely understand the next composition, «The Seducer Of Eve» – a short interplay (that is the way it could be perceived if one happens to hear it outside of the context or apart from the full album in-between of the more severe parts), that has a reference to a biblical story of Eden’s garden and a seducer Lucifer. It can probably be considered an ironic toll on the musicians’ weaknesses because this fascination with post-rock can be regarded as one. A broken rhythm and variations of the sound space as a part of musical phrasing can also be heard at the beginning of the next tune, “Joker.” Still, the most exciting element is the interplay of the guitar and the saxophone, which sometimes mock one another and sometimes create a ghostly unison. But I also have to remind you that we are talking only of just several bars, short fragments of the ideas, a couple of minutes.

The final composition – a soft and eclectic “Lūgšana” created a feeling of a deceptive peace, only later allowing me to notice a faraway subdued nervous heartbeat of the drum rhythm. The guitar’s ambient sound and a somewhat wildly unrestrained saxophone are also engaged in a dialogue among themselves; this conversation’s topic seems to be the inability of our needs and opportunities to meet in the same place and time.

So what does this album give to the listener? The fact that the trio Auziņš, Čudars, Arutyunyan is an ensemble that we most definitely have to pay some attention to is well known since 2019 when their album “Baltic” had received a “Golden Microphone” award for being the best jazz album of the year. Also, the fact that «Jersika Records» is a serious record label with a concept at its core, and not a one-record paradox of the modern vinyl vibe is undeniable. What makes the label even more respectable is the ability to maintain a well-thought-through high-quality musical message in a confusing EP format. Another key to solving this album’s mystery is a 1988 Nele Zirnīte’s etching “Valdnieks” (Ruler). And the listener is given an option to switch up his listening habits by engaging in this 10-inch vinyl with a 12-14 minute long musical effort (the length of the side of the vinyl), after which you have to physically stand up, go to the player and turn the vinyl on the other side to continue listening, or maybe to stop listening and do other essential things, and this is a conscious choice to engage in music or commit to the mundane. This experience is very different from listening to music using digital streaming platforms, where the flow of new and unheard music has become a part of our aural mundane. This form makes the music seem more significant since it requires some effort on our part. And we have to be thankful to the musicians and the producers for that.

Nowadays, we don’t have enough opportunities to appreciate the small wonders of life. Knowing this, we see that “The Maze” is not some vast and epic adventure, but rather a bright and polished tool of switching our mundane mind to a new setup, even if only for a short while.