Sometimes you have to go to the other side of the world, and sometimes just cross the stree 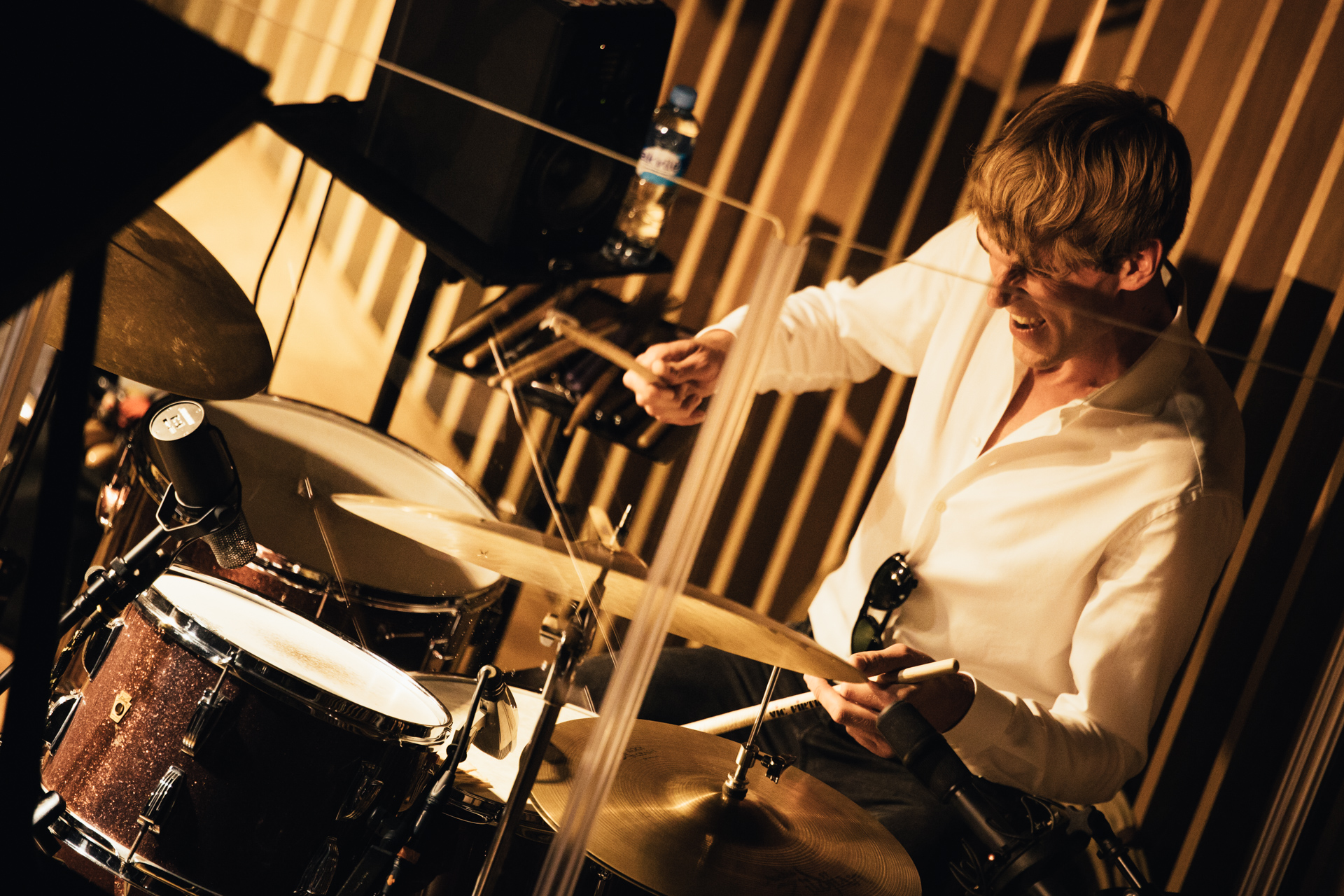 Did you ever think you’d like to focus on one music genre?

Yes. But it’s different, living in such a small country if you want only to play music. Actually, I think it isn’t possible while working in one genre. It can be related to all of the Latvian musicians.

How did music come into the spotlight? Does it come from your family?

Theatre comes from family. Theatre environment where I’ve been all the time since I was 4-5 years old. Theatre and all this story — the stage and the music and the actor play and backstage. The technical side to it all, as well, all of this gave me the first impulse. I could hear lots of music at home, of course. And it was quite soon that I understood it would be the drums — at the age of six, I quite purposefully made that classical drum set from pans and pots. But the theatre was a cradle of everything.

Which are the criteria when you could say no to a gig?

My criteria are sometimes very self-centered — probably if there’s a line-up of musicians who are different from what I do now, what I play, and what I listen to. If there’s an element I like, maybe it isn’t even a commercially advantageous event, but I can agree to it — for example, a punk-rock detail or a way to compose songs. I often say no to projects to save energy — I cannot be a machine and play 2-3 concerts a day or eight concerts per month. I need some time to get my strength back.

How often do you have days off?

As I’ve already said, I leave some time to get my energy back. When going to my rehearsal space and just working with the drums and the piano, I do that. I can rest when going to visit my parents who live outside Riga, or just listening to music. I listen to lots of music deeply — not when washing the dishes but sitting down for at least 15 minutes. And that day off is a break to my ears — a day without the music.

Is there any genre you usually listen to the most?

I listen to a lot of singer-songwriters. Leonard Cohen, Joni Mitchell. That’s the genre closest to me — great singer-songwriters. I have a pandemic list of sorts, a huge piece of paper with my personal discoveries, and there are some 30-35 compositions already. That’s the list I began putting together during the last week of March — pieces I haven’t heard before or haven’t been listening deeply enough, and which really touched me. Fundamental albums.

Is that pandemic list a reflection of how this year has influenced your daily routine?

Speaking of work, it, of course, was visible — I don’t work anywhere that’s paid by the government, I only work at the sessions. The country has helped me, I got some support, but I still felt it. My daily routine hadn’t changed that much — I still go to practice every single day, as I did before. I like some healthy routines — that path from home to my working space doesn’t change. But, of course, all things were rescheduled or canceled at some point, all of them.

Do you think there’s a set minimum any musician has to maintain for a practice routine?

I think there are the instruments you have to befriend more; for example, you should keep being friends with the trumpet every single day, Kostya Yemelyanov has said that. It’s the same with the drums: a little ritual, even 45 minutes — rudiments, technique. Some drummers don’t have any drums at home, but I think that the minimum is one hour. And I do more. I dig something, and it can be a whole song or just a part of it, or just a bar, or a concept — and then there are things I practice for three months or things I practice for three days in a row. I usually find something like that, work on it, put it on a paper, and get going. I work on one thing for 2-3 hours a day, and then I do something else. The average is 3-4 hours a day. And if I take a day off, then I do more on another day.

Is there a good quality of drums education in Latvia, in your opinion?

At least to the level of secondary school, yes, there’s Tālis Gžibovskis. I cannot even put into words how much I respect him as a teacher and person. It’s only now, ten years after graduating from the RDKS, that I began to be fully aware of some life things, masculinity things, attitude stuff he has taught. And, while moving forward, I think that the young musicians have to maximally aim ahead and try to get to their idols and people who inspire them. I address people whom I like playing privately — I write them emails. If you write them with all your heart, soul, and motivation, do that using some acceptable literary language, many people could actually reply. And, if their schedules allow that, and you can come, there’s actually an excellent possibility for you to get to those people. I had also reached out to some great people when I got the contacts and did some writing. Then you have a bunch of people whom you can potentially return to, reach a deeper level, then that conveys entirely different energy. 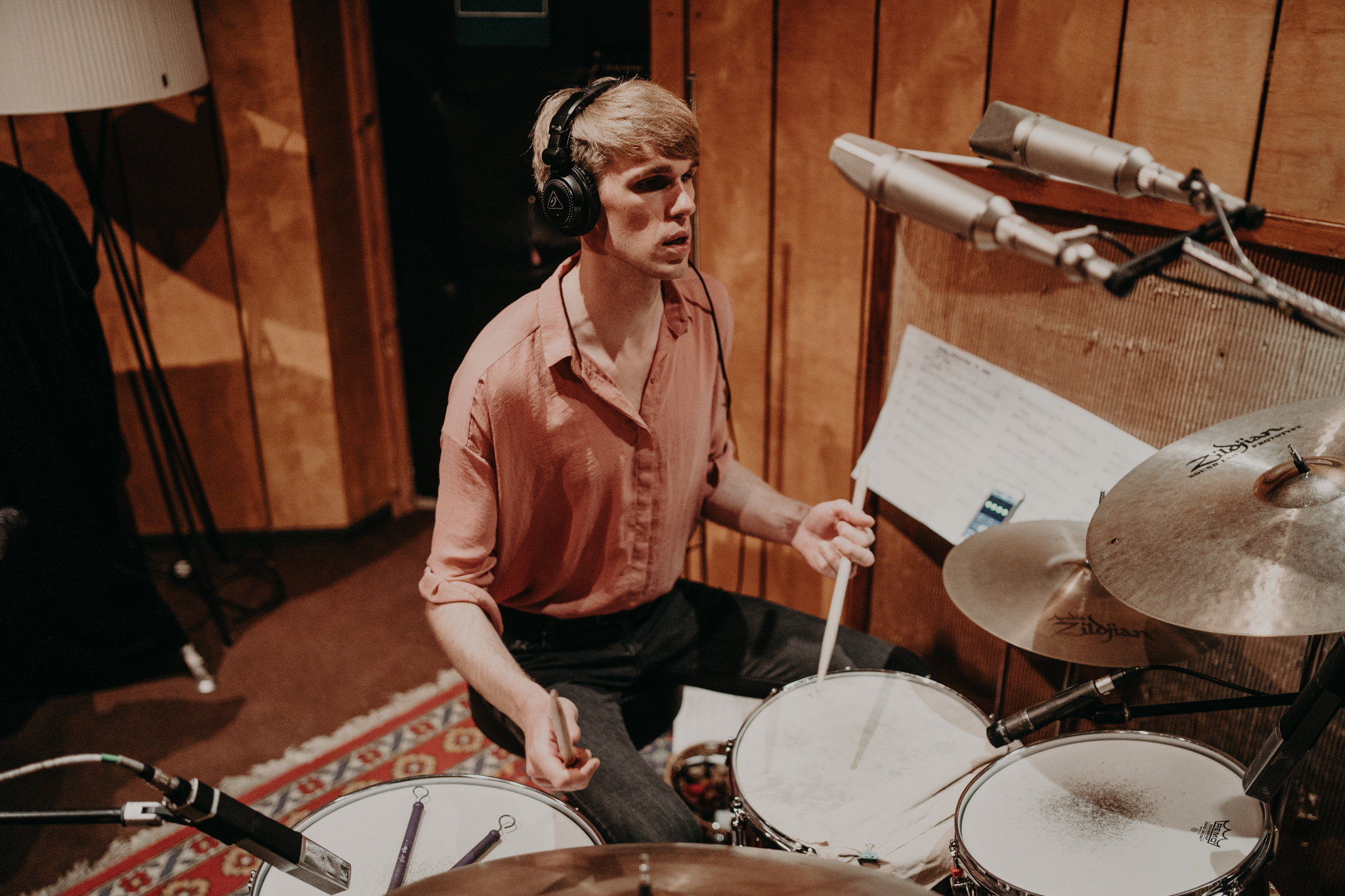 Did you ever go into a venue and think — okay, this time the concert won’t be as good. Because of the audience, for example?

I try not to think like that; this isn’t the right default state. It doesn’t matter if there’s just a couple of people in the audience or a couple of thousands; if it shines or it rains, I try to stick to that spiritual thing. That’s a fragile thing; you can push that down with the external factors quite soon. I’m trying not to.

Do you take into consideration the audience’s reaction when you play?

Earlier on, I was more afraid of the audience, and now I try not to be scared that much. Previously I was closing shut, but now I’m trying to stay open. Sometimes the listeners can take the musician in a completely different mood. Hemingway has a great saying — when you come into a venue — it doesn’t matter if it’s a room, a cafe, a bar, or a concert hall — you immediately have to think of how that venue makes you feel. And that audience combination in that venue — how do they make you feel. That’s excellent training for your mind, which concerns playing for live people. It changes when the audience changes.

To be honest, I like «black box» venues and halls the most, just as the first floor of «Palladium,» for example, if you cut out these bar corners. Venues of such size are the most comfortable for me to play at; you can just turn the dynamics down. The smaller the venue is, the more you can manipulate with the sound dynamics.

Are you an active listener yourself?

I’d like Riga to have more energy for what I want. Jazz music, rock music, grown-up, mature singer-songwriters. But I attend concerts; I like it a lot. If I don’t have to play myself that evening, I try to go.

What inspires you in life?

Movement. That’s how I defined it myself. It can be shown in many different ways, but the action is the main keyword — movement — physical and mental. When you move and visit new places, find yourself in some new situations, meet new people. Sometimes you have to go to another side of the planet. Sometimes you have just to cross the street. Find out things about people.

And where are you moving to right now?

I would like always to work internationally, always play music, that is clear. I would like to work in an international unit — either together with a singer-songwriter or instrumental music, but I’d like to go global and as serious in terms of the volume as I can. In terms of musical quality and spiritual quality. Inspire people to listen to music just as the others have inspired me. Dig deeper instead of staying on the surface.

You definitely are one of the ensemble players. What role does the musician’s personality play, in your opinion, so that he can really listen to the whole band?

A huge role. Especially in the rhythm group, engine compartment, as we call it with Jānis Rubiks. First of all, you have to want to play in an ensemble. You want to be a part of the band with all your heart, and then all the rest just varies depending on a genre, situation, and line-up. Some people absolutely cannot function within the band, so I’m happy they can do their solo projects or find some other multimedia things.

Speaking of the genre, which direction, in your opinion, does Latvian jazz head now?

We have to do something because there’s no decent jazz club in Riga, there’s no platform or environment to go to. Latvian jazz musicians of the highest level have to have a place to go, have a beer and feel free, where to come after their sessions and daily life. And speaking of music, Latvian jazz is overall on an excellent ascending level now — speaking of what I heard. Going up nicely.

How important, in your opinion, is regularly playing with the same people?

Very important. I am a band sound fan — that means that you make sound together with a band, ensemble. My favorite music is band sounds. My work’s specifics suggest that I have to jump into many different bands in a brief period of time — this is exciting but not always easy. And I actually stand for making sound with a band, with people. With a thought that you will make sound together, through mistakes, through side effects.

If you would change anything in your life, what would that be?