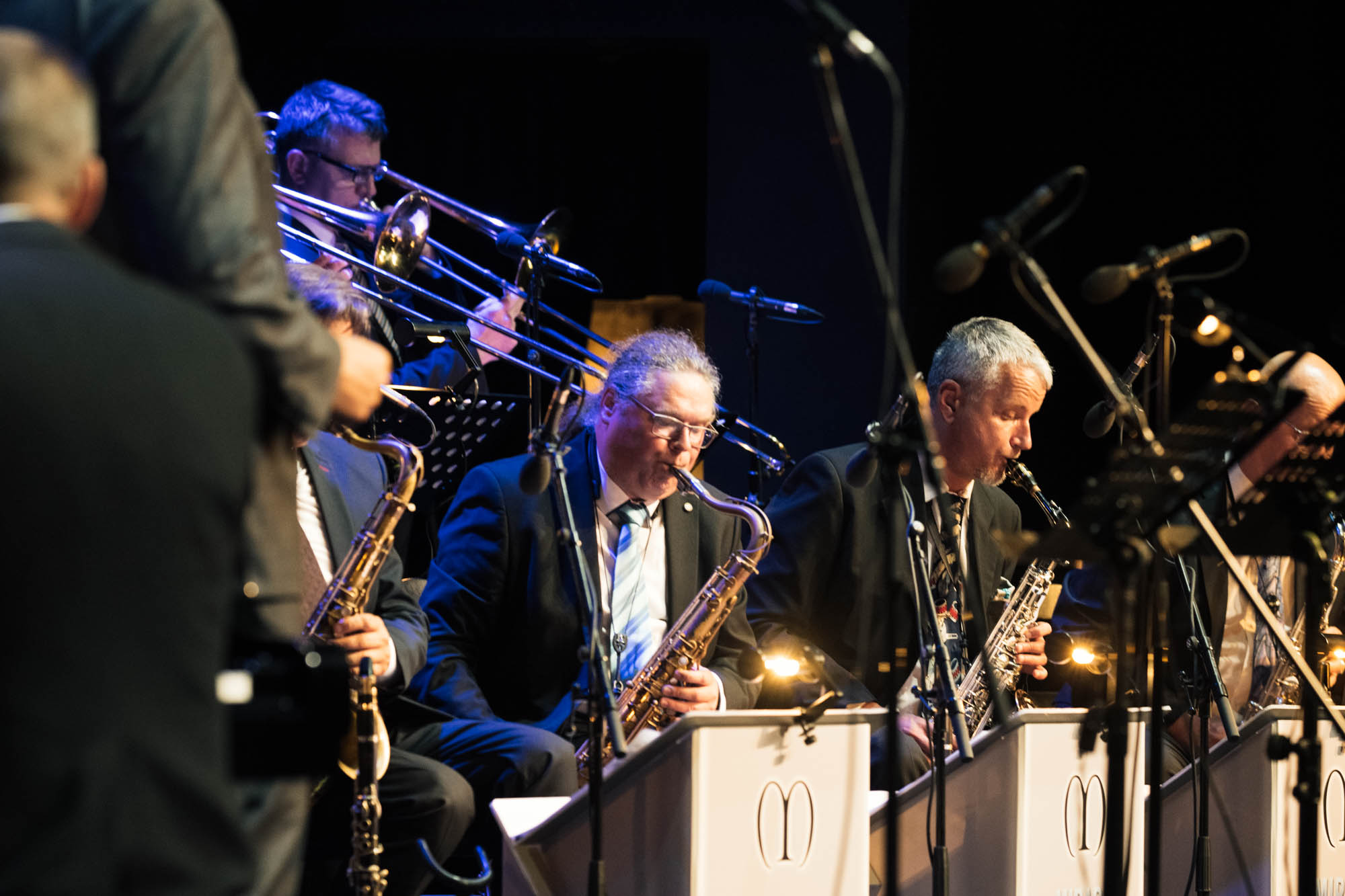 The beginning of September 2020 not only meant the beginning of the new school year (nice one in the beginning, because the students could have met in person at last, instead of communicating with their teachers through a computer screen, while self-isolated at home) but one more positive event as well. On September 3rd, a long-awaited concert, rescheduled because of the pandemics, took place in the Daile Music house — that was the anniversary night of the head of the Jazz department of the Jāzeps Vītols Latvian Music Academy, the only jazz historian with a doctor’s degree, clarinetist, saxophonist, banjo player, and a nice person.

The concert in two parts featured two bands which Indriķis himself is a part of — the first part featured «Mirage Jazz Orchestra» while the second part had another unique band, Dixieland «Dream Team.» The concert had lots of special guests as well — Eduards Raubiško, a colleague of Indriķis, JVLMA teacher Inga Bērziņa, ethno-jazz band «Patina» participants — singer Biruta Ozoliņa and drummer Tālis Gžibovskis, singer Normunds Rutulis, who also hosted the concert, guitar player Ingus Feldmanis, and the others, but a special surprise for the audience was the speech of the Latvian minister of culture Nauris Puntulis and his show together with «Mirage Jazz Orchestra.» 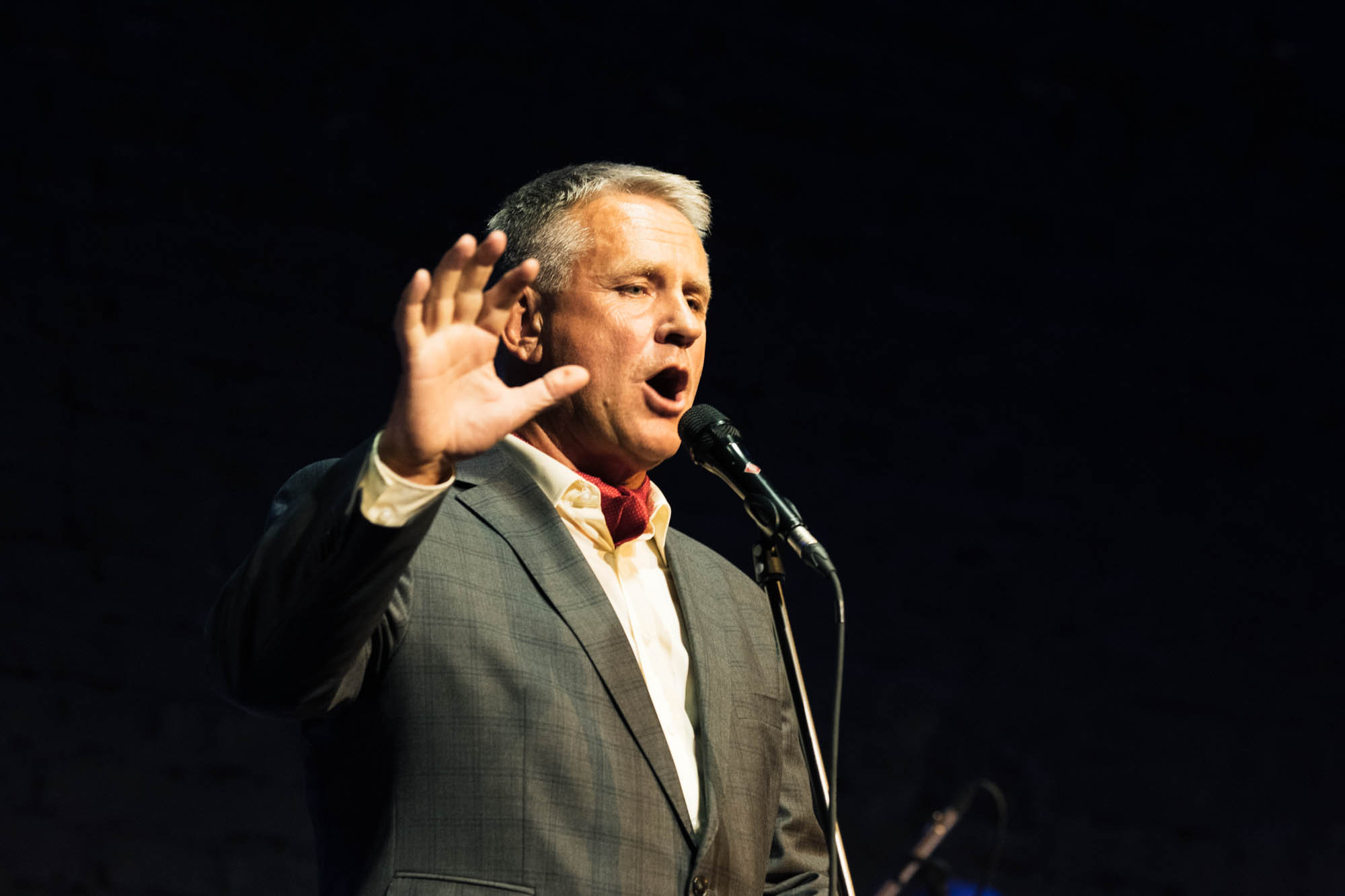 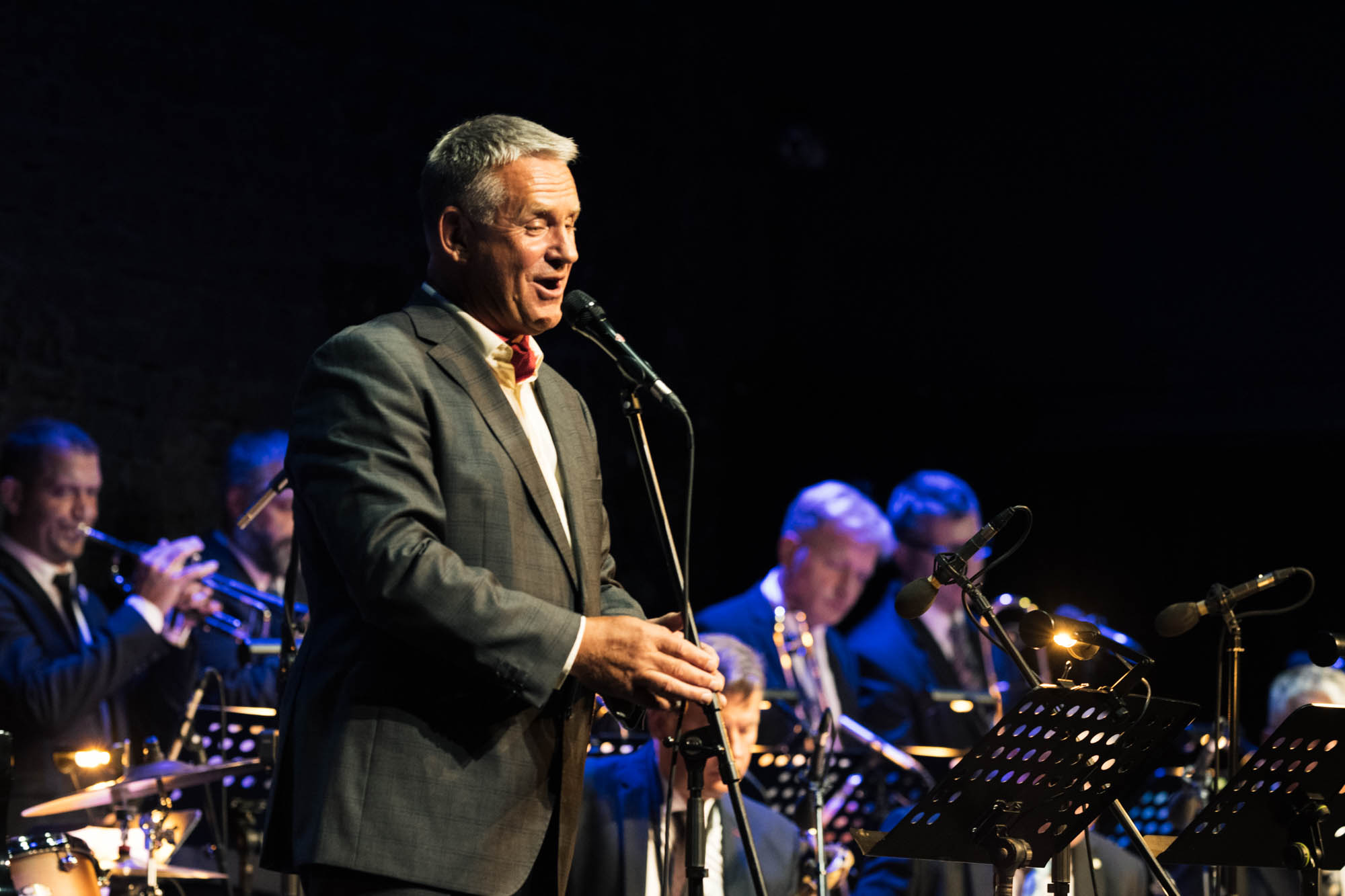 There were many jazz compositions one could enjoy at the concert, jazz arrangements of many well-known pieces, renditions of Madars Kalniņš, some long-forgotten but excellent songs. Of course, there was the music of Gunārs Rozenbergs, whose name is closely tied with «Mirage Jazz Orchestra» — the band had a good connection with the legendary artist. The concert’s whole feeling was both festive and relaxed. There was a lot of joking (especially mentioning improvised composition announcements by Raivo Stašāns). Still, it was evident that the musicians were so happy to meet each other on stage and play music together. The listener could notice this in all the shows — all concert members were friends, not just colleagues. 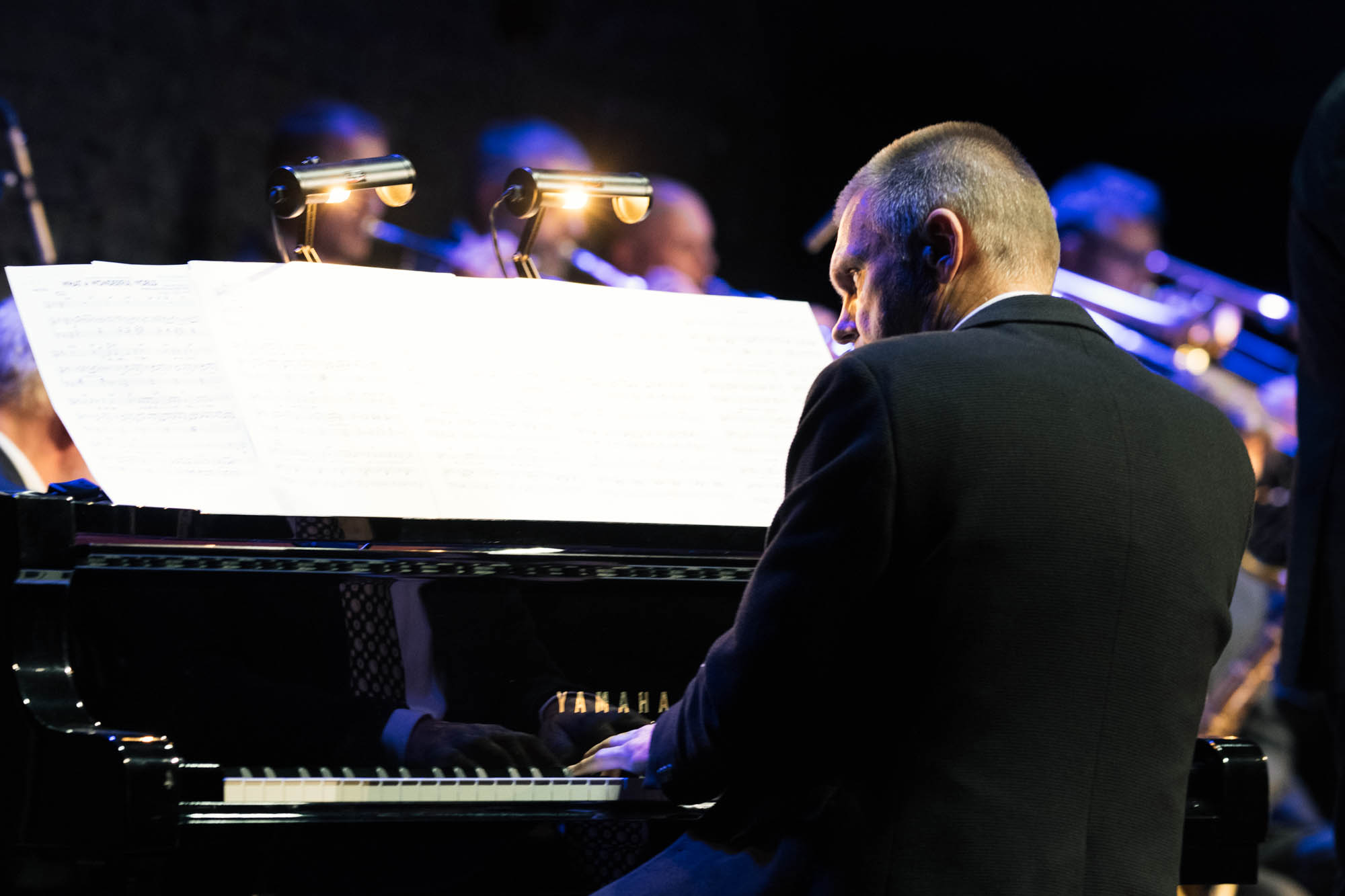 Our «JAZZin» magazine team this time decided not to review the concert but to offer the listeners to enjoy some photos of the show along with some emotions of friends and colleagues of Indriķis Veitners instead. 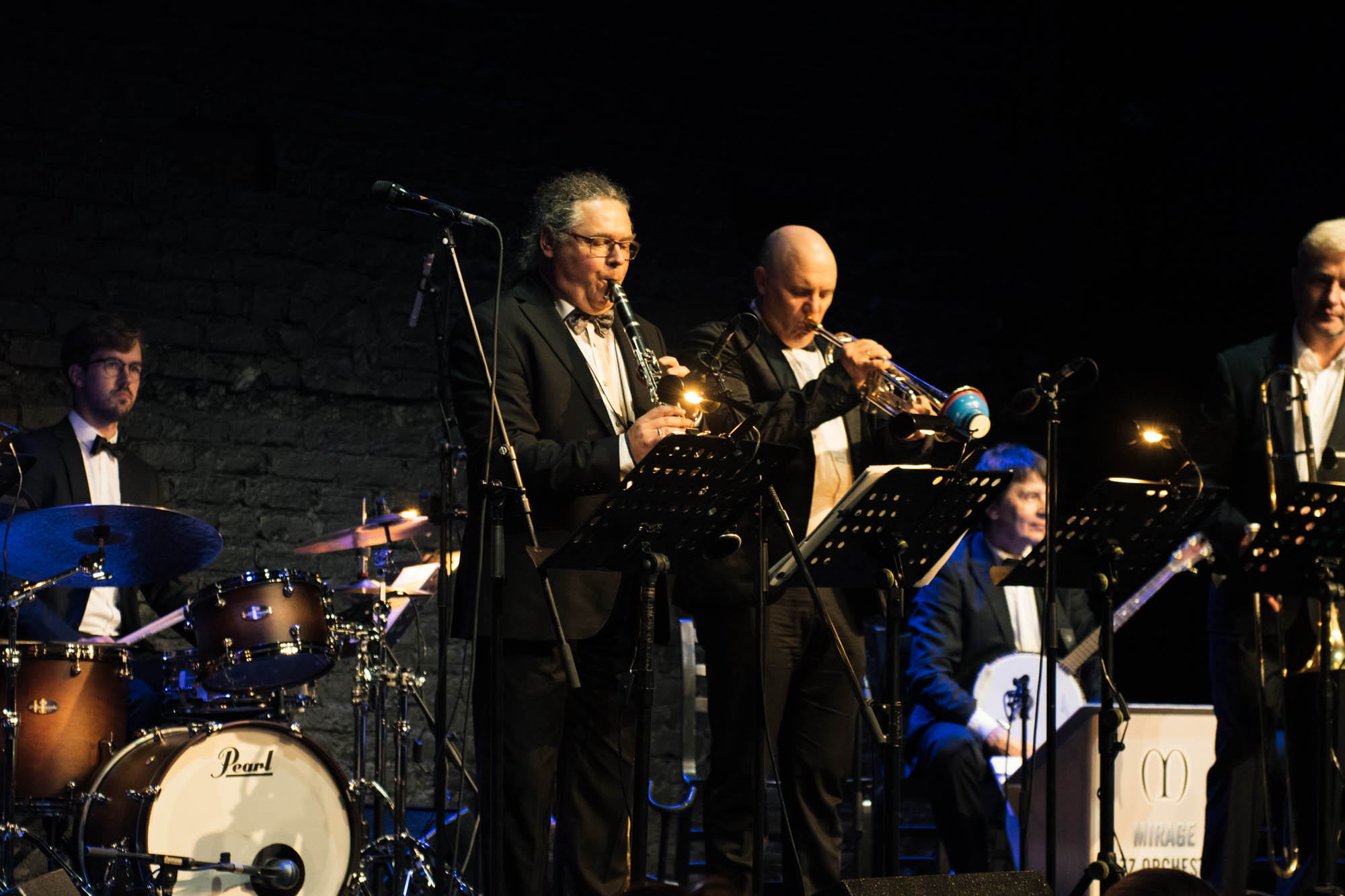 «Indriķis is my coursemate from the master studies time — we were studying at the Academy of Culture together, Culture and media management. Beautifully he plays indeed, very emotional. He is a very positive, fantastic person and supporter — this was the feeling I had at the time of the studies. But I also got to know his father, poet, and journalist Juris Veitners, and we were even colleagues at «Jūrmala» newspaper. So I am the bridge who knows two generations of their dynasty.» 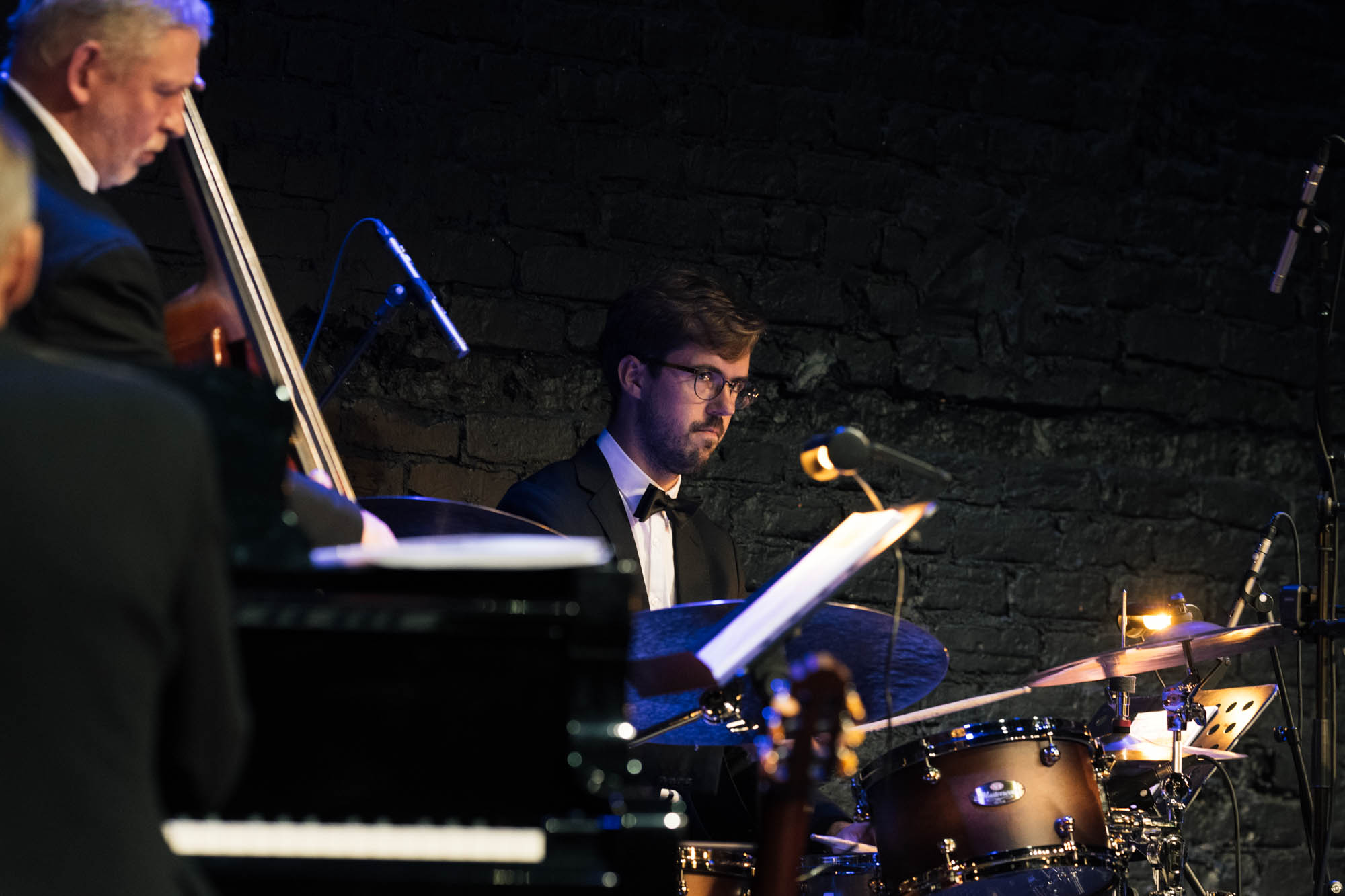 Dace Kaprāne, Keeper of the Main Collection of the VEF History museum

«At first, I met Indriķis as a fisherman. At our countryside houses nearby I saw him for the first time when he was visiting our friends — before that he was working without any days off for three weeks in a row, then drove to the countryside, went out of the car, didn’t even enter the house, put on his rain boots right there, took two buckets of fish food and ran to Salacas river to fish, and didn’t stop for the next ten hours. It’s only then when I found out he isn’t only a fisherman and a passionate, talented musician and amazing historian, a friend, and a father. Everything Indriķis does music-wise is amazing, it’s done with love, and one can see that he loves these compositions he has chosen for tonight’s concert himself. I listen to those and feel it in every composition — yes, this is Indriķis, this is him.» 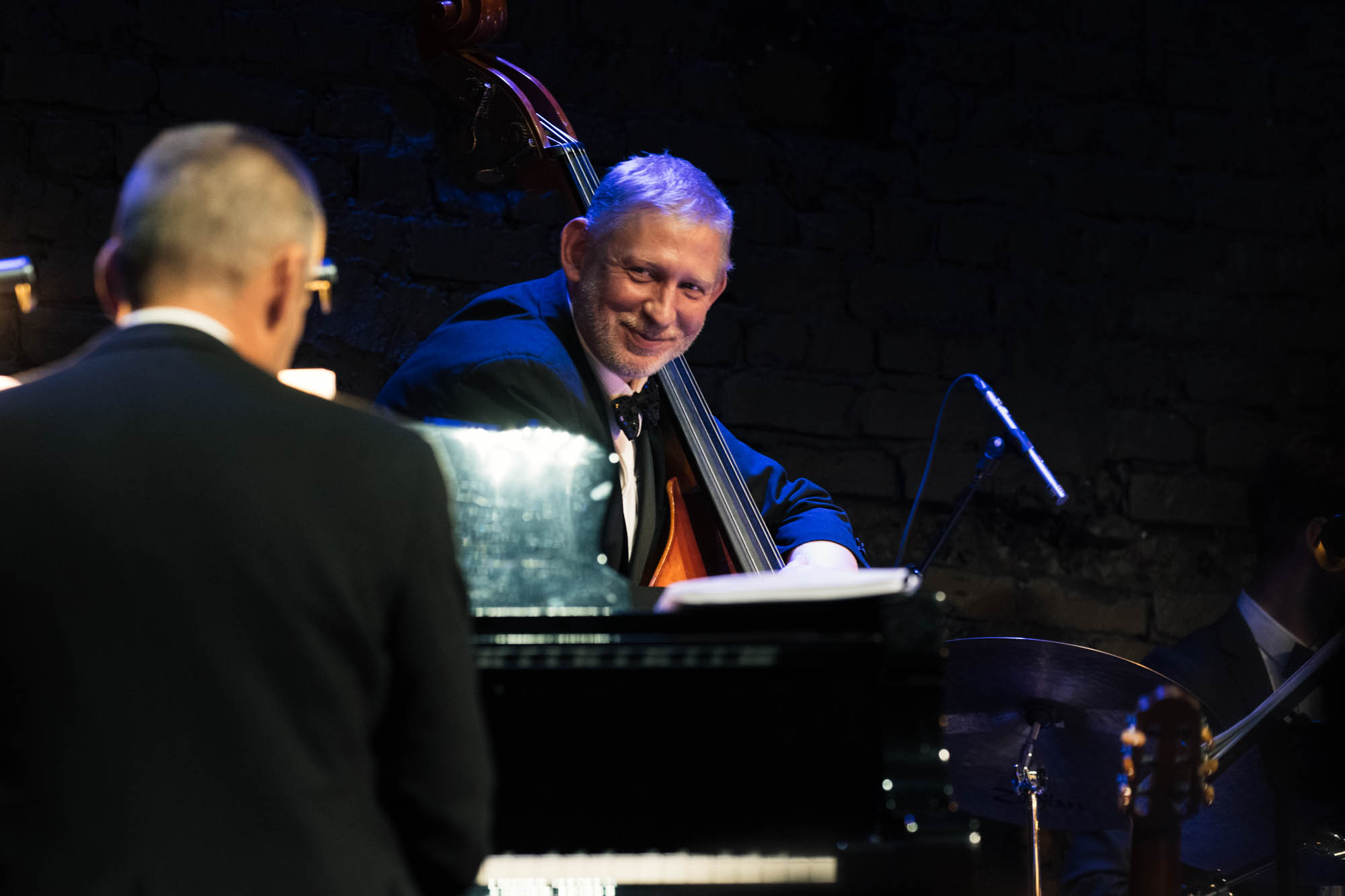 «So much comes to mind… In the beginning, I didn’t realize who he was, I’m a classical pianist myself, but he is a real jazzman throughout! But after that, I began to realize who he was when these guests began coming to visit, and when I realized that the majority of these guests visiting are jazz people. Then I saw how much they appreciated Indriķis and how much they liked to communicate and play with him… One cannot instantly see what’s in front of you, but when you look with someone else’s eyes on something that was always near, you think — wait, he’s amazing! He’s outstanding, and he plays awesome! And, if we mention fishing, all these Americans usually know that they have to bring all these rushing rods and all the bobbers and everything, I mean, all America lives along with Indriķis’ fishing!» 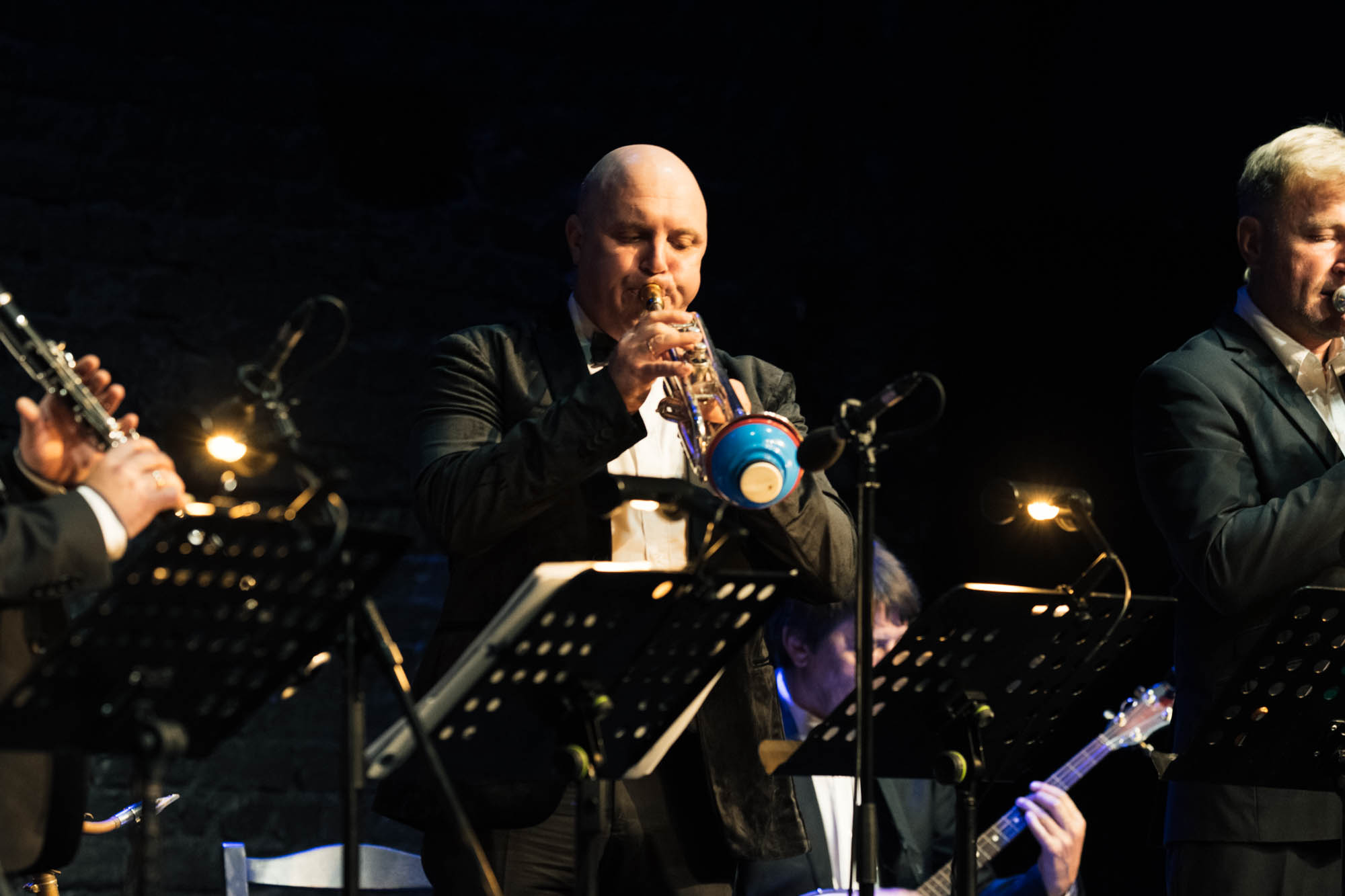 «When thinking of Indriķis, it’s our talks that come to mind in the very beginning. We don’t just work on our business trips but also eat paella in a restaurant in Madrid or hang out in the Belgium beer bar. It’s just as nice to talk at the «Laima» cafe near Academy’s parking lane or in a fantastic countryside house of Indriķis somewhere in Gaujiena. It’s always something to discuss, and it’s always some pleasant thoughts as a comment from his side, with a witty remark from the book quotes.» 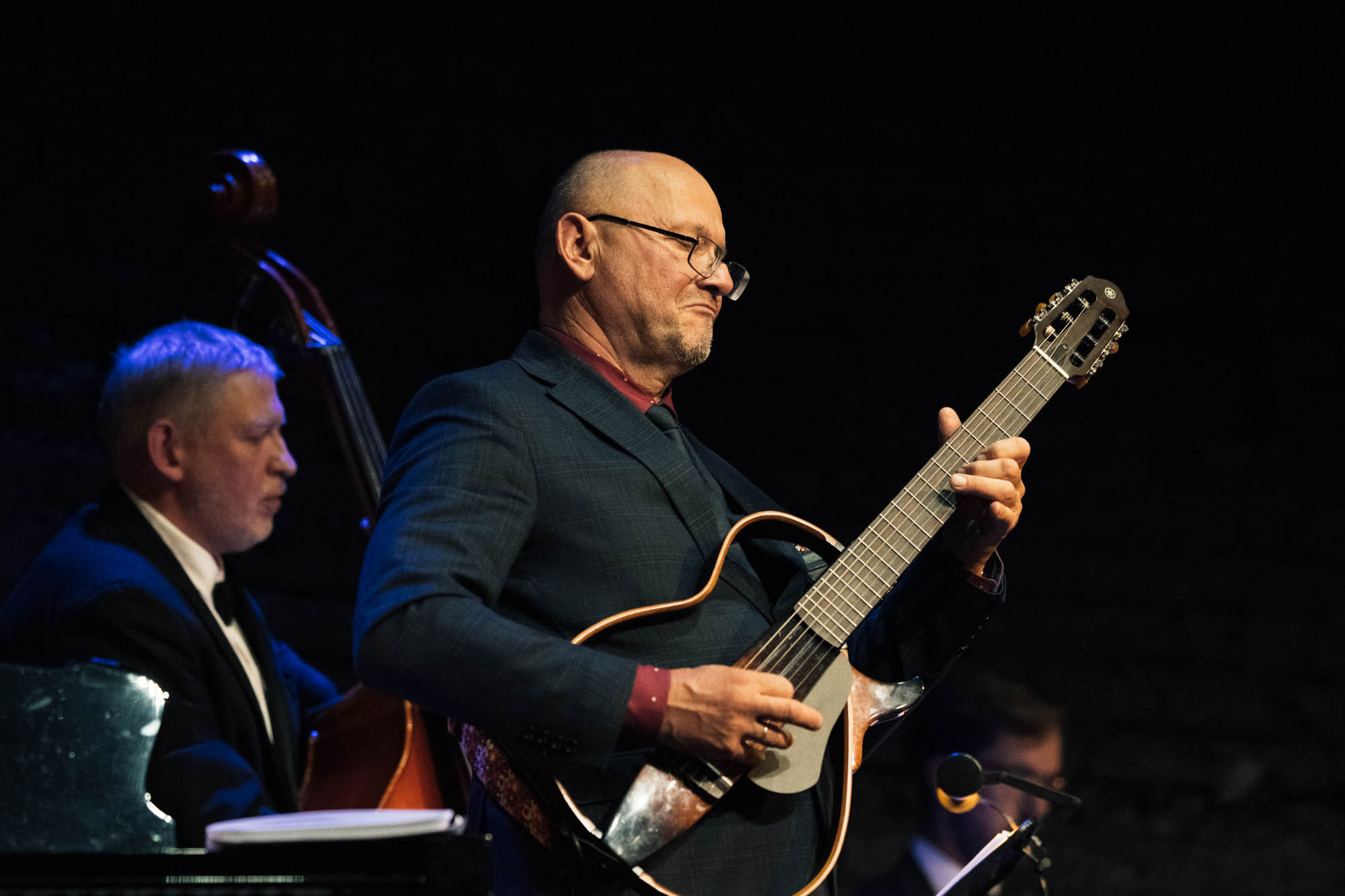 «Indriķis is a true professional! It’s a real pleasure to play with him! Notes of any difficulty level are so simple for him! Indriķis is a true «orchestra person.» And also a man of his word, you can undoubtedly rely on him — if there’s anything you have agreed upon, it will be precisely like this! Unfortunately, it remains a rarity nowadays… He is honest to himself and the others!» 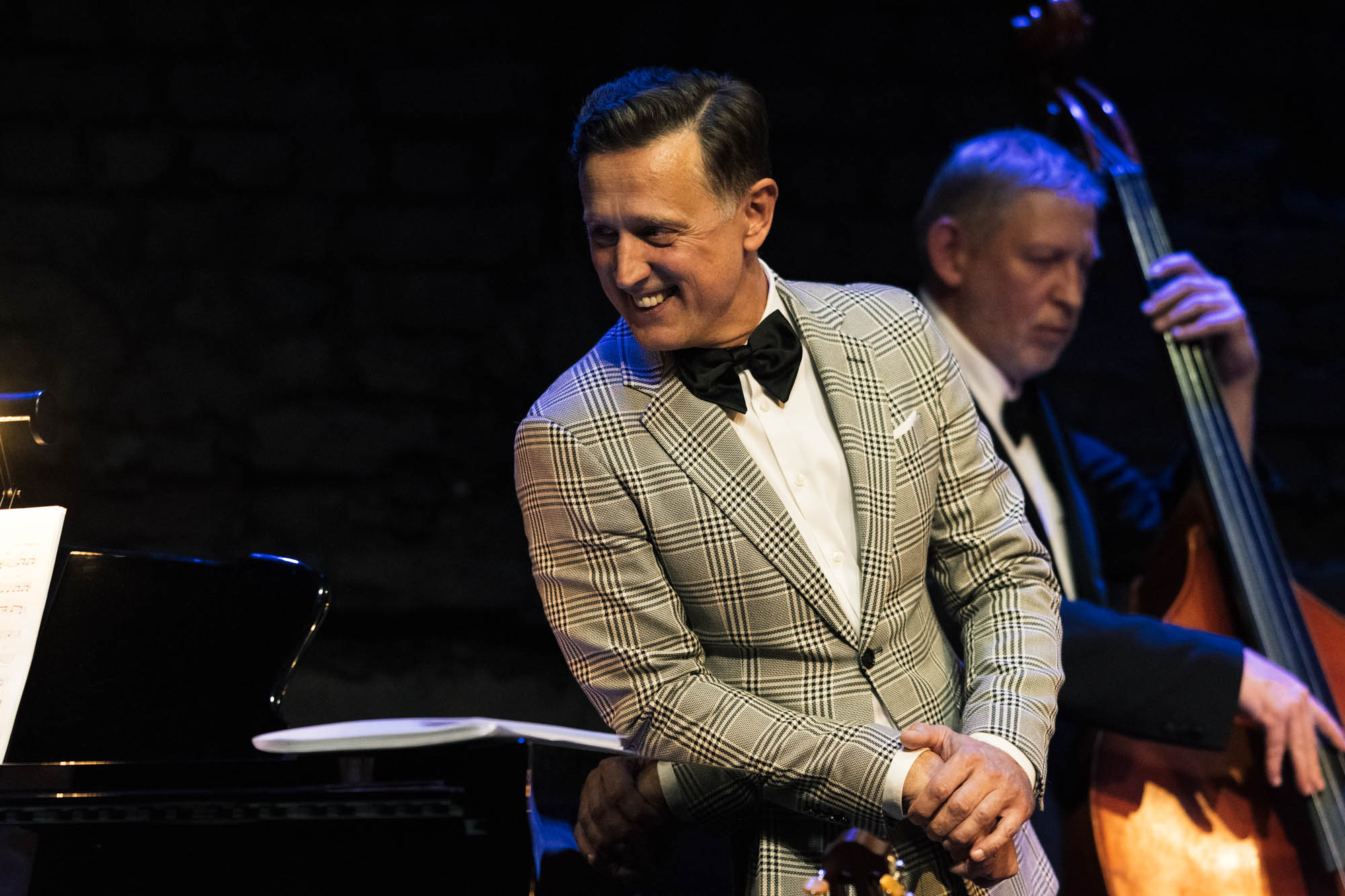 «Indriķis is a powerful man. It’s easy to play music together with him and feel the vibe together. He was born to do music. I’m happy for all the times when I could say: «And now solo — Indriķis Veitners!»

«We are of the same age as Indriķis, and we’ve spent quite a lot of time together. Everything that was, of course, connected to playing music — we’ve played at «Sirius,» «Volo» and Radio big bands the most. Besides that, Indriķis has always played in various bands, beginning with jazz bands with Juris Mutulis for many years and ending with Innokentijs Mārpls, Žoržs Siksna, «A-Eiropa» and many more. This is what has always fascinated me in him and inspired me. Not making any distinctions, nor drawing any imagined borders, just always playing at his maximum and with the best quality possible.
It also seems essential that Indriķis has always kept a very sincere, honest, open, and straightforward attitude towards his colleagues. He always precisely explains his opinion. He doesn’t accept an attitude of not caring too much… And, of course, I’m so happy about his family, countryside house, and fanatic fishing joy!
I wish him to be able to balance all the important things in life, but also leave some time for his hobbies and rest. And, of course, we’re waiting for the new historical research and books!»