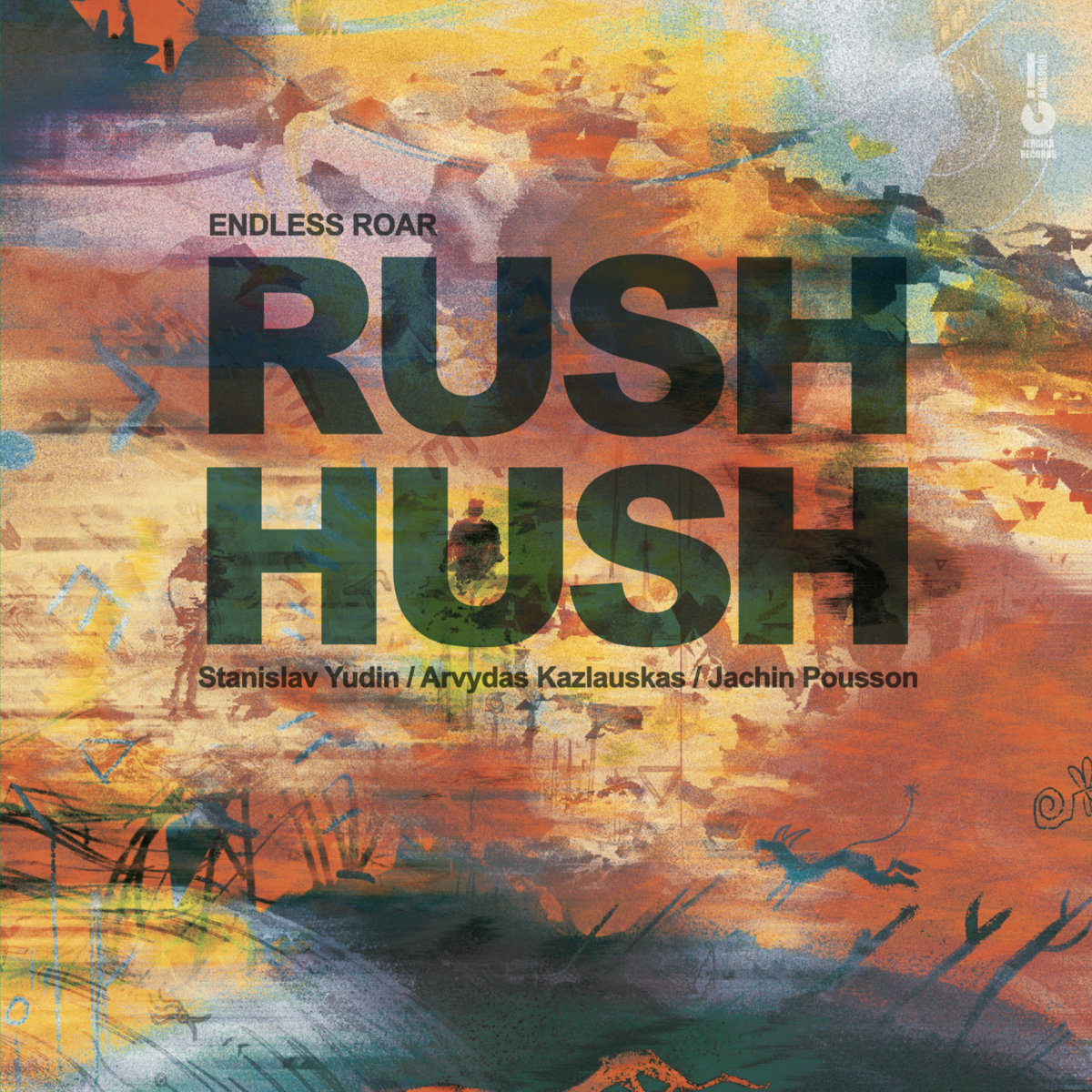 One more time «Jersika Records» reminds us about the tamelessness of the artists and projects it represents. Based just on the knowledge about the catalogue of the label, it’s often not possible to predict the contents of the album, probably just a couple of elements that are always there. It also reveals in the «Endless Roar»’s vinyl «Rush Hush».

Improvisation — a very important position in music is taken by the here-and-now impressions and impulses. Every musician freely plays around the elements and musical ideas — composing the material «in the right time», reacting to impulses given by the other musicians, using very bright means of expression.

Freedom — it’s not possible to put the music into a strict genre or style category. Some elements and sources from a big musical world can be included: techniques of contemporary music, jazz language and phrasing, rock rhythms, ambient and «drone» music textures, and so on. All of it appears either in a solid form or is hidden as a source of inspiration, comment or variation.

Format — the recording is taped and pressed onto a vinyl. The length is limited to a format, the recording is limited by the use of tapes (there are no endless post-production possibilities used, provided by nowadays digital era). It brings freshness and truth to the music, which doesn’t seem artificial. We’re listening to the exact way the musicians have felt and played this music at that exact time. Non-mediated and without any mechanical interference.

What do we hear in the album? «Rush Hush» is performed by three musicians, specialists who are already well-known for what they do. Jachin Pousson, author of the album and concept idea, plays drums; Arvydas Kazlauskas plays saxophones; Stanislav Yudin plays double bass. Although this isn’t all there is. On the very tenth second of the album our ears get surprised by a texture we hear. There are more saxophones than performers. Both Kazlauskas and Yudin use electronics — «looper» pedals which let them record short musical motives which are repeated after a certain interval of time. This lets them create complicated and thick textures which cover a wide spectrum of frequencies, layering musical ideas of different length and intensity.

During this whole album Yudin and Kazlauskas exchange roles, where one sets the rules of the game and another reacts to it or chimes in to the given idea. Pousson has taken the role of a «timekeeper» — he plays linear though unpredictable rhythms with a weird regularity, which serves as a point of reference to our ears, so that we don’t disappear in complicated sound chains.

What should I listen to if there even is no melody? On the foreplan of the free music completely different parameters and points of attention evolve. Creators of this genre (Ornette Coleman, Don Cherry, Antony Braxton, Cecile Taylor) found it important to express themselves freely, think out of the box, as well as study music from another angle. Declining usual methods of expression (melody and harmony), one has to find different ones that will take their place in a never ending cycle of tension and clue, which is just as imperturbable a law in music as gravity. Even though this isn’t an exhaustive list, it can definitely become a base for future exploring.

Contrasts — all music is based on an impression the contrasts leave on our attention. You can understand the form if something repeats or is in contrast with something else. We’re especially waiting for tiny nuances if we’ve been listening to a stream with thick textures and confusing ideas before, and we want to hear something more aggressive if we’ve spent enough time listening to an inalterable static music.

«Flux» begins with a direct rock influence. Loud and aggressive baritone loops put up a background where Yudin makes his bass line on top of it. It is stable and grants some «grounding» to short baritone saxophone and drum cuts which altogether create intense rhythm collage. When Arvydas switches the loops off, we’re already brought to an energetic trio interplay, here contrast lies between a number of instruments we hear — baritone orchestra is a contract to trio. Tempo and attitude are still the same, but the roles change — now Yudin creates loop layers and Arvydas steps back, filling in a rhythm function with the «tongue slap» technique and supplementing soundscape with a breath noise. In between this rippling sound environment Yudin plays arco, explores various resonances and flageolets. This is a constantly contrasting material — puncted and rhythmical materials get in contrast with wavy and flowing. All of this happens in the first eight minutes of the composition. It’s hard to describe all the details and, to tell the truth, it isn’t that necessary because it spoils a great deal of the charm of free music, its discovery. Lots of nuances are within, which are very pleasant to hunt, while listening to the music repeatedly.

Rhythm is a layout of musical events through time. It can be both regular (within strict pulse; predictable) and non-regular (both within strict and free pulse; non-predictable). It has a great meaning in music because the human brain keeps searching for patterns all the time. If all incoming information is foreign or keeps changing, our ears get tired and we lose attention because we don’t have any reference point, meanwhile if all the information is too predictable, we also become bored because our brain has solved the «puzzle». It doesn’t get tested well enough. In the core of all music there’s an unstoppable fight between these parameters, and the one who finds the most elegant solution, often catches our attention. In this album the drums are one of the solutions, because their sound and tone are predictable, and the distance between beats often follows a strict pulse.

In the beginning of «Jabberwocky» we hear different tiny sounds and noises — short, jerky motives of soprano saxophone, Stanislav’s «col legno» (with a wooden part of the bow) played springy noise, clatter. All of these elements are rhythmically independent from one another, nothing unites them in one pulse, before in around a minute and a half the drums join, which proves an unquestionable pulse. My ears immediately pay attention and compare all that is around with this. Even though the rest of musicians play free, our ears catch the pulse and we can observe development of the texture in time. 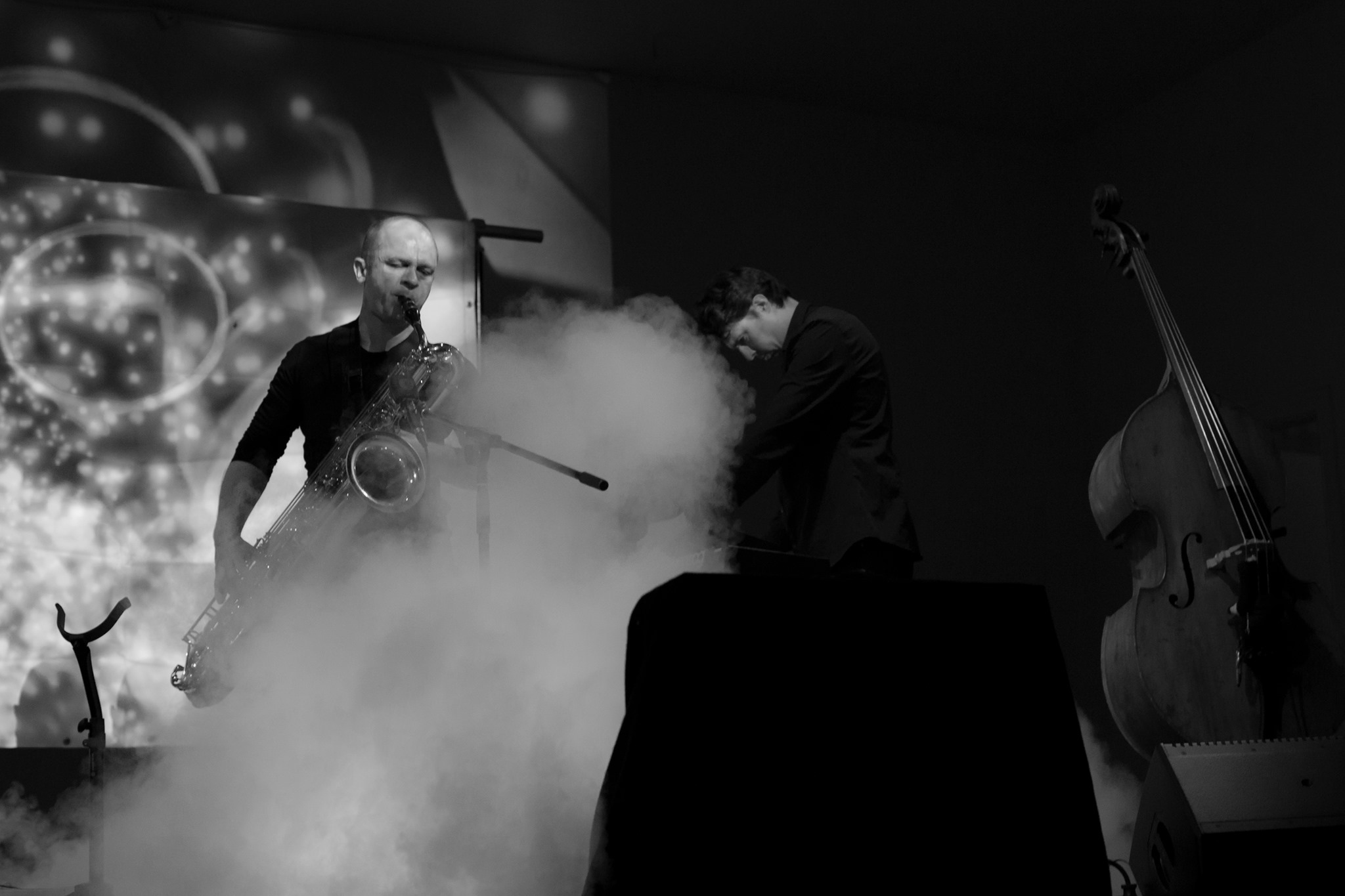 Texture is an acoustic quality of the sound which is hard to describe without using visual terms. You can define that by observing the sum of the sounds, without defining instruments. The musical texture can be flowing or punctuated, thick or thin, hoarse or smooth, wide or narrow, bright or humble. Just as the level of human endurance of hot food differs, here the borders can also be unclear because the textural resolution for every listener is different.

In «Biomes» you can detect many different textures. In the beginning it’s airy and flowing. Drums play with brushes, natural high sounds of double bass, clicks of the saxophone and airy sounds make the whole soundflow soft and appealing. It reminds of the sounds that can be met in nature. The pulse is free, which adds a feeling of the lack of rush to the music, sounds merge into one. The texture thickens until the drums come up with a light pulse. Saxophone and bass play longer melodic phrases, resonating together. The whole texture becomes brighter and wider. While the bass plays in the human voice register, it turns to singing. The sound is well-known and pleasant to our ears, which attracts attention. This texture stays until the bass begins playing «pizzicato». The music becomes more active and punctuated. Calm higher note loops fade out and a hoarse baritone saxophone sound cloud overtakes the scene, which adds pressure to the music.

Motive and its development — the motive is the smallest musical entity which has a thematic identity. It can be a group of three notes, or — in this music — a more abstract scope of sounds. Its development can be observed in many processes: repetition, variations, pressing, prolonging and so on. It’s easier to notice it, paying attention to one of the instruments and following the changes of the musical material.

In «Facades», following along the material played by Kazlauskas from 00:53 to 01:17 one can hear linear development of the motive. He begins with a repetition of a one note motive, immediately adds a dropping motive of two notes, then prolongs the length of the notes and moves their pitch. After a short moment he turns the motive of the two dropping notes upside down and creates a new chain of motives — a phrase. When the intensity grows, the rhythmical painting gets thicker until it becomes a constant note flow.

Form — I could say that, just like in minimalism, free music is strictly processual, it’s correct understanding is horizontal, almost never vertical. It doesn’t have any specific goals to meet. There’s no usual tonal harmony relationship. Its value isn’t hidden in a construction of individual elements, but in a whole flow. The form is often intuitive or previously agreed upon, or based on a graphic notation. It is still abstract, and, even though it’s possible to spot an ABA form, it definitely isn’t the main goal of the music. It’s interesting to observe how musicians create transitions, which material they return to, which ideas they decide to react to.

At the end of «Flux» Arvydas creates more and more intense and rhythmically active phrases, where Stanislav’s response is to step back and keep silent, while Jachin follows rhythmical paintings of the saxophone. Arvydas sharply changes his register from low to high, moving to long vibrato notes. Yudin momentarily joins back with his bow and plays pulsating tremolo soundscapes in a high register. His choice is intuitive, but it fits in perfectly, at the same time being a transition from Arvydas’ idea to the ending of the composition and as a stable part of the form.

«Rush Hush» is an interesting example of Latvian free music scene, where three musicians of different contexts and work fields meet. The music is introspective and it explored the human mind — an influence of nature and the city on it. In my opinion, free music is like a flow of the mind, and it perfectly shows the chaotic character of the mind. Within the album there are moments when ideas and material played by all three musicians cling together perfectly, but there are also moments when the whole message cannot be understood so well. This is a risk in free music — it is possible to create original music which was never heard before, which emotionally and intellectually stimulates better than anything else, but it’s also possible that it will leave us longing for something that makes more sense. I enjoyed «Flux» and «Biomes» the most because I think that a longer format demonstrates and supports the listening skill of the trio the most, as well as it shows us their ability to create great transitions and develop ideas. I’m happy there is more and more free music in Latvia because it has always helped to push the whole level of the music up, as well as it represents a very open and honest attitude towards music and art.