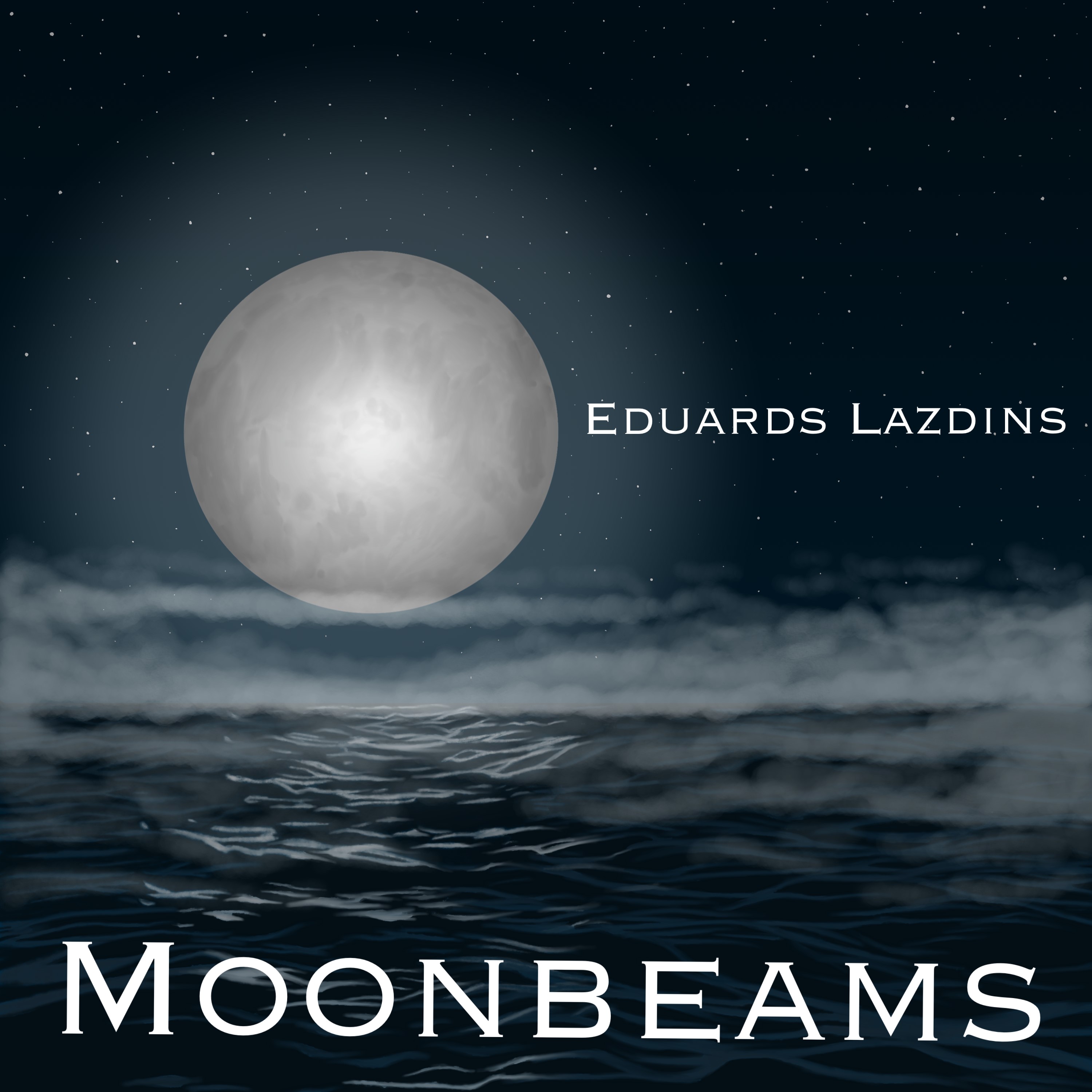 «Moonbeams» is a debut of a guitarist Eduards Lazdiņš who represents the youngest jazz generation on the ring of Latvian jazz albums. I was truly surprised and intrigued when this album came onto my radar, because the name of the musician wasn’t known to me at all. A really young guitar player, being a Riga Dome Choir school student himself (just as the limited internet resources told me) in a line-up of a quartet performs his original compositions, as well as many popular jazz standards. The album begins with a really powerful composition which, in my opinion, nicely characterizes this «jazz-fusion» band sound and attractive interplay.

The album opens up with a powerful demonstration of the band’s interplay in a fusion composition «The Mighty Oak Tree», and a sound space with effects gives this recording a special, a little bit cosmic, open sounding in the progressive art-rock mood. Quite soon the piano solo begins — even though I was waiting for a guitar playing at least some notes during a piano solo, drums and bass accompaniment makes the dynamic texture grow, accompanying intense improvisation of the pianist. In the beginning of the second solo this composition wears the listener out a bit, because, while the slow, cyclic tonal plan doesn’t change, both improvisations are linked by a sharp dynamic bridge. Guitar solo continues, sticking to the same plan, gradually rising up the dynamics and thickening comping texture. This first composition is obviously thought as an explosive, where all band members would play approximately all quickest and the most virtuoso passages, but unfortunately there wasn’t much from the composition point of view.

The next composition offers a beautiful lyrical contrast to the previous one — a bit of melancholy accompanied by six eights. It’s also pleasant to hear that the composition is written as a self-sufficient entity, the main goal of which isn’t an introduction consisting of extremely long solos. It made me think how this composition would sound without any effects, in the colors of a classical jazz guitar quartet. The next composition as well, with an easily memorable groove, made me shake my head to the rhythm. Here I would as well like to hear some connecting material in between many solo parts, but the accompanying band pleasantly forges the dynamic curve of every solo from the beginning to the culmination.

The next three compositions are quite a quick and heavy difference from the first three. If there’s just one thing that gives away that this is an album of a young musician, it is a very edgy and rock-like arrangement of «Autumn Leaves». Even though I usually don’t do «jazz police», I have to admit this arrangement is balancing on a very thin line between something very banal and tastefully arranged, a feverish harmonic arrangement and alterated melody, in my opinion, hides the mood and the feeling of a classical standard. Both following standards of John Coltrane in this instrumentation with a synthesized grand piano sound and bass guitar accompaniment take this, in my opinion, critical authenticity element away. Saying this, I of course keep in mind that authenticity wasn’t a goal of this cover version. Speaking of performance, interpretation of this quartet is less objectionable, since it sticks to a heavy and fateful mood while performing «Equinox», and the guitar player has as well demonstrated a quite competent improvisation in the challenging harmonic plan of «26 — 2».

The last, and the title composition of the album «Moonbeams» was a pleasant return to a personal handwriting of the young artist with an interesting guitar play at the core. Here, just like the other compositions, I would like to hear more development in the structure of the composition, probably even a tonally or rhythmically contrasting B part, or more compositional substances in between solo parts.

It’s a pleasure to hear that young Latvian musicians also aim for perpetuating their compositions in the studios. Being a fan of the fusion jazz genre, I listened to the original music of this young artist with a huge interest. Jazz standards, placed in the middle of the album, are there to seemingly fill in some still missing original composition space, and without them this album would be an EP. These jazz standards quite sharply contrast with original music and sound of the quartet, so it might seem they’re just lost somewhere in the playlist of this fusion band. I’ll be waiting for the the upcoming music of Eduards Lazdiņš with pleasure, it was nice to listen to a technical interplay of the band and technical mastership of the young guitarist — I hope to hear more original music of his in the near future!