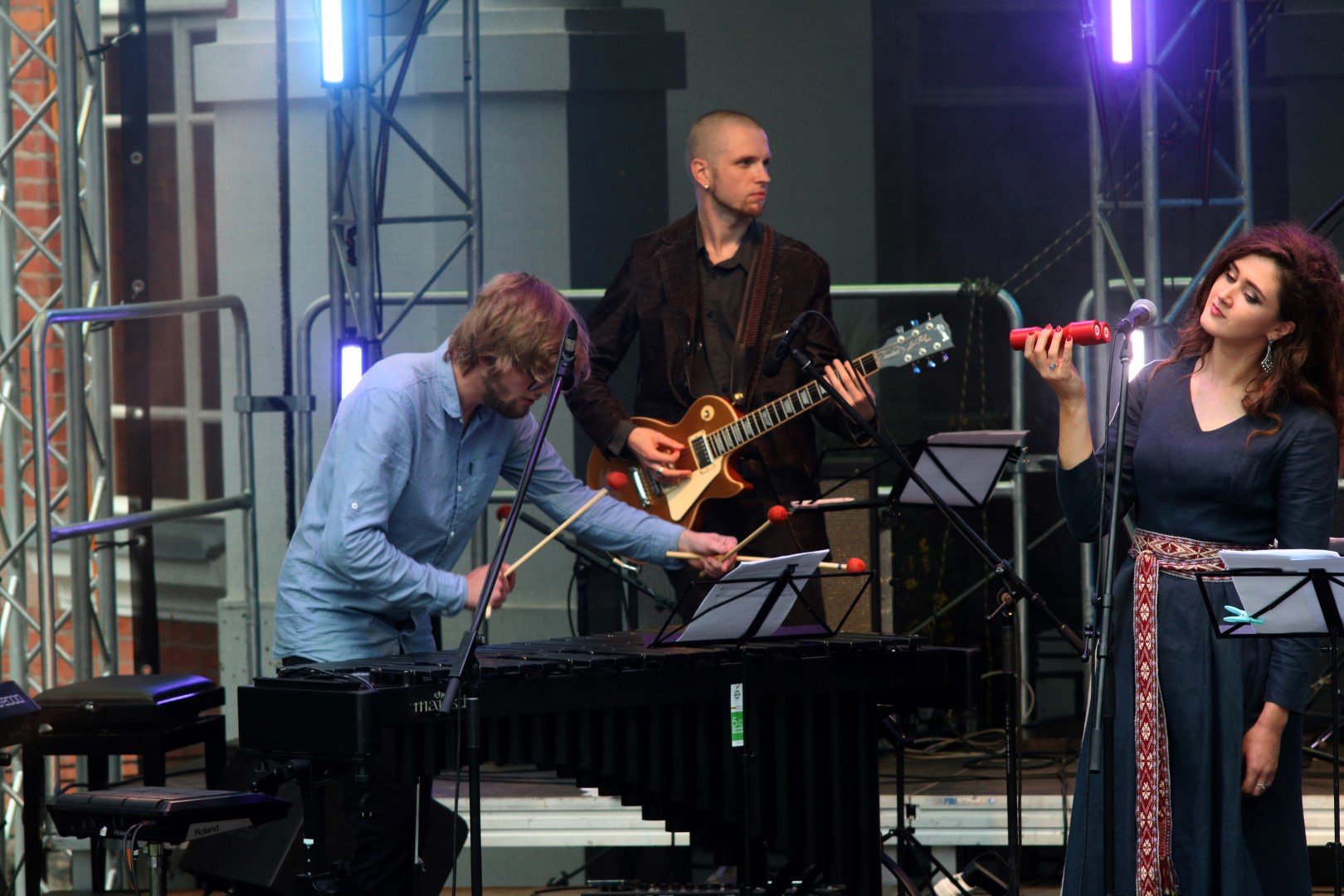 At the end of this summer, from August 28 to August 31, in Lūznava of the Rēzekne district a completely new festival, the first Baltic jazz festival “Škiuņa džezs” sounded for the first time (translated as “Jazz in the shed”). The author of the idea of the festival in 2018 was a jazz musician, composer and founder of a jazz department of the Rēzekne music school Toms Lipskis. The aim of the festival is to promote jazz music as well as stimulate collaboration of jazz musicians in the Baltic countries, actively taking part in workshops, jam sessions and concerts, experiencing it all at a beautiful and calm Lūznava manor in Latgale.

I myself had an opportunity to go to Latgale and participate in this festival together with my colleagues of a “deciBels” project — “Ethno + Jazz Vol.5”, which has already sounded in “Riga Art Space” in the beginning of spring. The aim of the project was to show and promote the development of new art forms that takes place in Jāzeps Vītols Latvian Academy of Music. “Ethno + Jazz Vol.5” is a project of ethnomusicology and jazz department students, in which one can hear some fresh breeze, uniting different ideas and Latvian folk recordings of the last century.

So, after a short break, we got together again, freshened up our program and in the morning of August 30th went to Latgale. I have to admit, a road trip more than 3 hours long was quite tiring, nevertheless when we arrived I was pleasantly surprised. Lūznava manor definitely is one of the most beautiful and gorgeous manors which I’ve visited. The stage was located right in front of the manor with a tastefully decorated listeners area to it.

Starting with August 28, there were workshops and jam sessions, but the opening concert of “Škiuņa džezs” festival took place on August 30, where us, “Arhīvisti” (Archivists) were the first to open the night. We began our performance with a text, borrowed from the archive, recorded by Pēteris Rudzītis, Riga New Latvian Theatre actor. Then we continued our concert with some arranged Latvian folk songs. I have to admit that the instrumentation was quite vast throughout the concert, beginning with a large number of vocalists and rhythm section, together with a kokle (Latvian lute), garmoshka, whistle, panpipe, and many other accenting instruments. The concert program was created, connecting compositions, moving on from one to another, letting the emotions intertwining in one story. In the program we could hear not only previously arranged, but also some original compositions, two of which were written by our guitarist Rolands Majors.

The audience featured also some JVLMA lecturers and teachers from some other schools who spent many days in Latgale, leading the workshops and taking part in the jam sessions. Unfortunately, we had to go home straight after our performance, so we couldn’t hear the rest of the participants. From my personal point of view this festival is a great way to end the summer, because what could be better than performing at such an amazing place, at the very end of the season, shortly before the active study year begins… 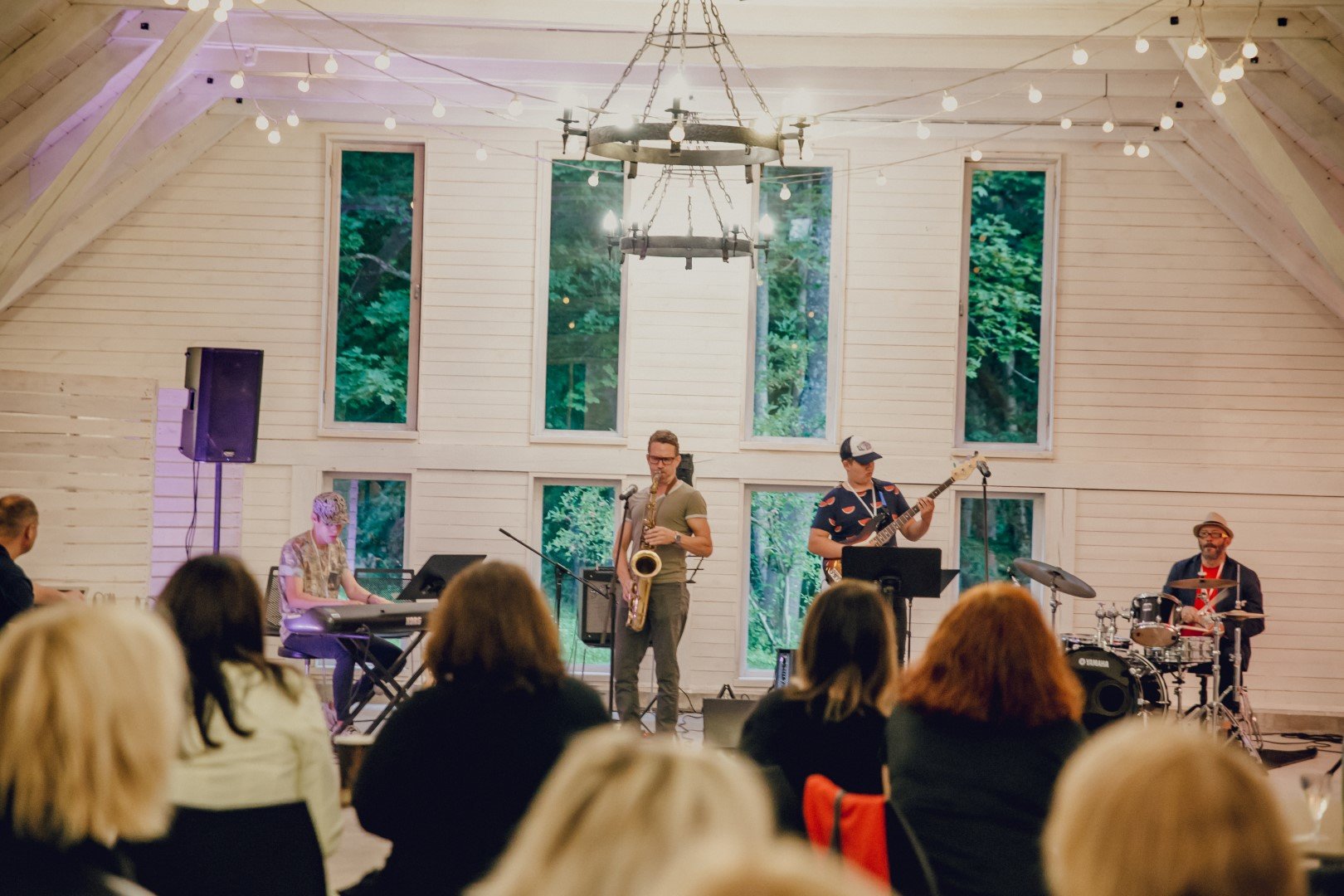 The author of this idea is Toms Lipskis. His dream was to bring jazz music to Latvale. In his lifetime Toms has achieved many remarkable things — created a jazz department at the Jānis Ivanovs Rēzekne music school, established this jazz music festival “Škiuņa džezs” in Lūznava, besides being an active jazz musician and composer.

The organizational part of this festival this year was taken care of by Lauris Amantovs, who also was studying at Rēzekne music school back in the day. The main idea of the festival was to bring this event to an international level, therefore musicians from Lithuania and Estonia were also taking part, whom we have previously collaborated with. These four days have passed in a blink of an eye, maybe I would like to see more wind instruments at the workshops, but there were a lot of pianists. I had a great impression about the students of Rēzekne music school, they were really motivated, attended rehearsals and took an active part at the workshops, it was a great feeling. The festival happened at an amazing place, very romantic and beautiful. The time we have spent in Lūznava us, teachers, lived in a castle.

In my opinion, it’s very important to actively organize such events in the regions, because the information about jazz music in some smaller towns and districts isn’t sufficient, so people don’t know what’s really going on. It’s an insufficient information exchange, which we could only improve by getting people acquainted with what we do. Jazz music in Latgale is quite an exotic thing, so we have to thank people who attend such events, and admit that we had some audience at this event indeed. I’m also happy about the fact that we could bring Jāzeps Vītols Latvian Academy of Music jazz and ethnomusicology project “Ethno + Jazz”.

During the festival, we could hear some very good concerts, for example, on the first day Siim Aimla performed his modern jazz program. On the second day the listeners enjoyed a dixieland “Dream Team”, then a Lithuanian band “Sambossa”, and Rēzekne big band at the end of the festival.

The technical equipment also was good, all the instruments and all the rest provided. We could work both with ensembles and individually. Organisers have done a great job.