An album which genre is impossible to define. In fact, it isn’t really necessary 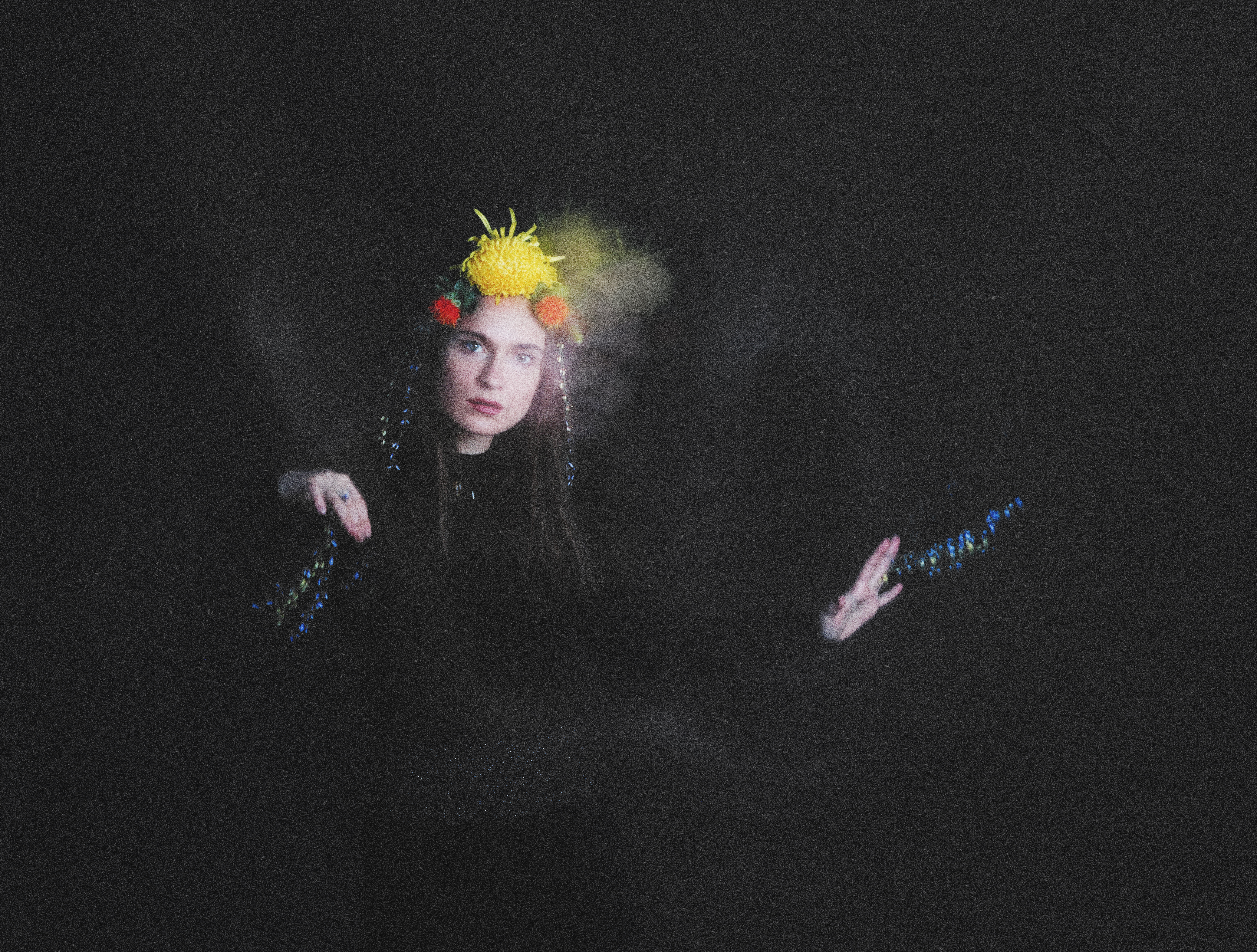 «Rezonanse» is a debut album by one Latvian singer, composer and improviser Elīna Silova. She has studied music and composition in Amsterdam, and later on – in Copenhagen, and now she uses her vast baggage of sounds and metaphors to create her own space in the huge world of music.

It is impossible and not really necessary to try and define the genre this album belongs to, it seems that it was composed without taking into consideration whether some several elements belong to a certain style. Eclectic elements are heard during the whole 24 minutes — double bass meets synthesizers, airy and artistic vocal lines seem to flirt with the guitar that is rich in various sound effects. Elīna isn’t afraid to use some unusual to the ear textures and timbres, which gives the album a unique twist.

If there is no obvious style that we can consider as a main talking about this album, maybe there is a certain element that we could use as an anchor while listening to this album? In my opinion, this is aesthetics, the ocean of different sounds and, of course, Elīna’s voice itself. Each composition is like a tiny sneak peek into her soul and mind. That is why each tune is embellished with completely different sounds, metaphors, instrument combinations and colors. The most colorful contrasts are found in the difference between the first part of the album and the second one, it is mainly highlighted by the change of the language she sings in. I suspect that this specific element hints towards the contemplation about her life away from home, outside of Latvia.

«Esmu Es» (I am me). The album begins with a very convincing composition. The music is matched to the lyrics of Imants Ziedonis, it was composed by the three members of the band – Elīna, Matīss and Lenarts. It is full of delicate and carefully patterned nuances. Throughout the whole tune the singer uses wordless vocalizers and dissonant melodies, that gives the tune this outworldly and a bit unusual mood. Almost every single aesthetic element that is found in this composition, meaning the wide spectrum of guitar timbers, from dreamy to goosebumpy, a dry and unamplified bass, which gives the tune a necessary grounding, simple but effective drum comping, all this will be later on heard throughout the rest of the album.

«Atzīšanās» (confession). The main part of this composition is played by the piano. The guitar is used to highlight the harmony, which was written under the strong influence of the Western classical music. You can hear the sounds of a synthesizer from time to time, which come in in a playful manner, as if flirting with the acoustic instruments. Elīna’s melodies twist some very intricate and yet tasteful embellishments and jumps that result in a fine collaboration with the sound of that classical music, which is also supported by the instrumentation – a piano, a double bass, which is sometimes played with the bow, while the guitar and the drums add some necessary contrast. That contrast is a powerful ace of the singer, and also is the element that vines throughout the whole album.

«Burvestības» (a spell). This time the harmonic information and the main position alongside Elīna is taken by the bass. This is a very unusual solution, because usually the lower frequencies of the bass can be a bit blurred and the harmony becomes harder to understand, although Lennart Heyndels is able to masterfully find the best ways for the notes to sound and comp the singer in a creative manner, which fits the magic of the tune perfectly. Percussions, a well thought through guitar part, the singer’s naïve voice timber enchant the listener with a bunch of small good deeds and miracles. Here I just have to point out that every musician and composer and vocalist’s creativity and flexibility is especially very admirable. Each tune has its own sounding and a unique manner that sounds like all the right things in all the right places.

«Ieskaties» (look closer). The beginning of the tune has a very rudimental and solid drum rhythm that leaves a lot of space for other instruments. Here pre-programmed electronic drums are involved in an intricate interplay with a juicy acoustic drum set of Ole Mofjell. Again I have to point out than the timbre and the tuning of the drums fits the whole pallet of the album perfectly. The drum patterns have enough breath and air, these instruments are often minimized almost to non-existent in modern music. The drums do not sound perfectly straight, which gives the music a special character. The composition is developed over a simple 2 chord sequence that just as a mantra helps us stay grounded and not get lost in the enchanting and poetic melodies of Matīss’ guitar and Elīna’s bewitching voice. Each repetition brings a tiny but calculated change in the performance, the music flows along with lyrics that change the texture and the harmonic sequence. A very illustrative and impressionistic piano passage flows into our ears.

«I will be moving». The first tunes from the second part of the album that signify the change of the language. The tune is different from the others because of its direct and playful mood. This playfulness is achieved by the constantly changing meters of the tune, which always jump from 4/4 to ⅞. A daring mood is being achieved through the rocky guitar solo in the middle of the tune. It is interesting that it seems that there are not a lot of these solo moments in the album, and it looks like this decision was conscious. It would be interesting to hear the same lineup perform this music with more freedom given to the interplay and the interaction in the improvisation. This tune however looks very pleasing and sounds in the same vibe of the whole album, it is like a breath of fresh air to the listener and prepares you to the music you will hear next.

«Letting go» is a ballad, where each instrument has its own role in the creation of a special sound landscape. Each note made by the singer‘s voice is breathy and airy, it peacefully flows over the slow and impressionistic harmonies. This in turn helps to bring out the effort of the guitar that reminds us of the waves in the sea. We hear the drums only in the second part of the tune, and they do not fulfill a usual role of keeping the time, but rather serve as a tool to create a certain texture. The tune doesn’t stay in one place for too long and leads us to another musical moment just in time to keep our attention and makes us want to find out about what would happen next.

«I see the lights». One of the most unique but effective combination of two instruments is the bass and voice, which brings out an interesting duality between low, heavy and the bright, fragile. Elīna masterfully presents a very emotional text with an ascetic instrumentation and a subdued performance. The song sounds as a quiet meditation, which is played in a free time without a noticeable pulse. It is interesting to observe how the musicians while they play do it seemingly for themselves rather than for us, the listeners, and we in turn are given a rare chance to take a peek at this happening through a tiny window.

«Patterns». A miniature song full of resistance where every instrument’s function is minimized to the most minimum you can imagine. Elīna sings her vocal phrases and melodies frivolously, and they sound unrestricted. She manages to achieve the feeling of lightness and effortlessness, although the material she sings is very complicated – with a lot of sudden jumps and a huge timbral range. It is like a small postlude that makes us anticipate the new steps in her solo career.

«Rezonanse» is Elīna’s retrospection of the previous years and a collection of her songs that were written during those years, which is a long period of her life. The album demonstrates a vast spectrum of the singers’ musicality and creativity, although at the same time leaves us with a wish to hear a more solid and strong concept. There is no doubt that the music is performed perfectly, and we hear some ingenious solutions throughout the whole 24 minutes, but in my opinion it could use more solid guidelines that would bring all the ideas together and deliver a more united message to the listener.