Paintings, dancing and music all in one show

The way dance, music and arts are able to tell the story of human relationships with nature 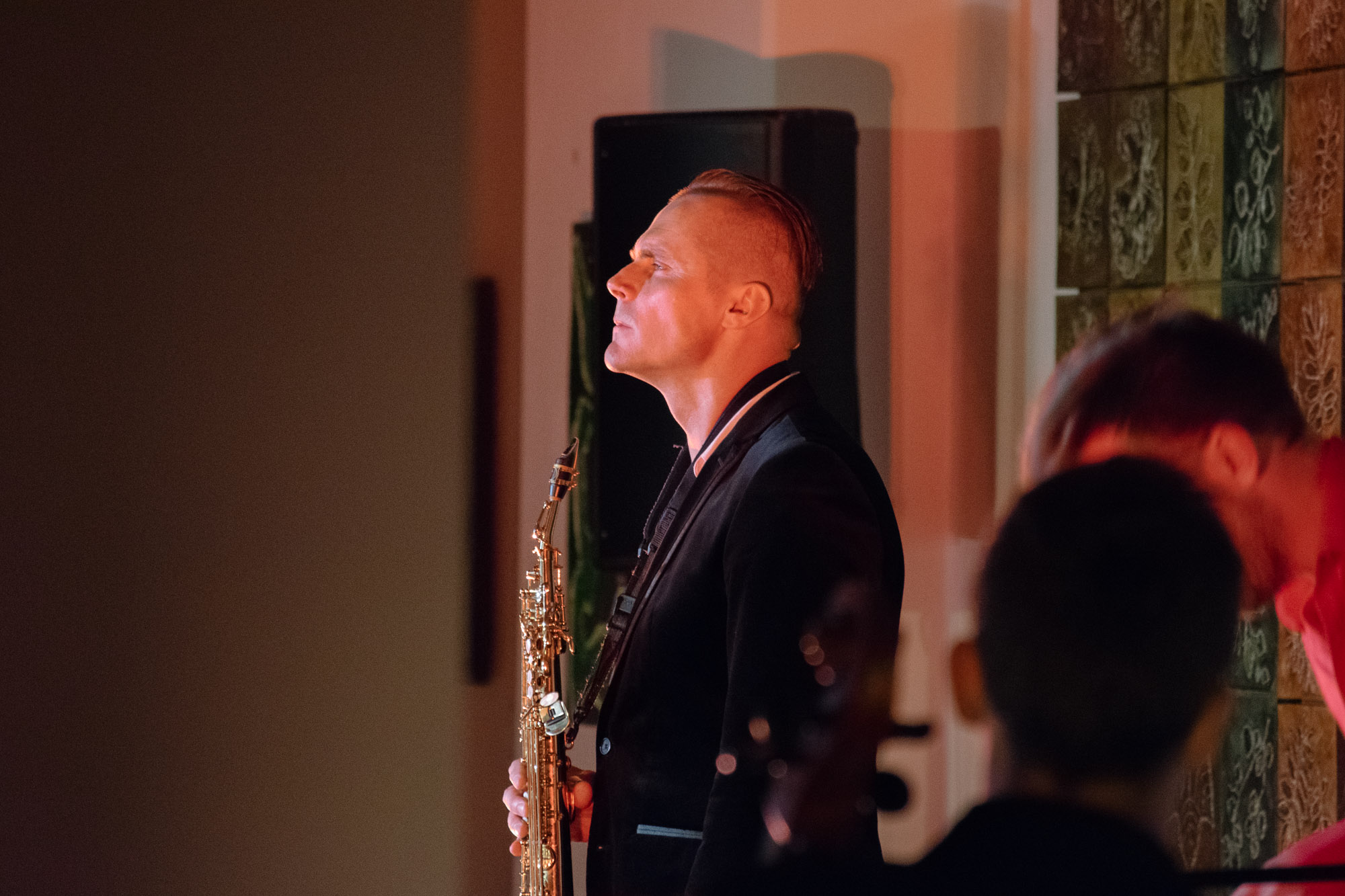 Last May I was lucky enough to attend a special show. The view was truly magical, I got to experience something similar only once before, when I used to live in Rome and had performed at a museum, although at that time I got to see the show only from my own perspective, as a performer. It was amazing, of course, but this time I got a chance to enjoy the full picture, because my role was a listener and an occasional photographer. Anyway, imagine a museum, a stage in between the paintings, some dancing is taking place on the stage, a live band playing — isn’t it wonderful? I think so too. The author of the idea is a well—known Latvian saxophonist Artis Gāga, who, while working on the show, collaborated with the artist Lidia Auza and dancers and choreographers Leonards Vīksne, Zigmārs Kirilko, Justīne Teličena and students from Riga Choreography high school. The show has been a part of the «Ars Rezumē» series, that has been a part of the program of the «Arsenāls» exhibition hall, and the program itself is oriented towards uniting innovative youngsters from different spheres of art.

Artis Gāga: I have always been an admirer of that power the muse has, when there are several forms of art that come together at the same time in all their glory. In this case the motivation to start working came from the paintings of Lidija Auza. In my head I had a clear picture that this show could unite three different things — music, art and dance.

«Alarm of the White Birds» is the title of one of Lidia’s Auza’s paintings. The word «Alarm» can have several meanings, one of which is «to be awake and ready». This symbolic bird cry can trigger two responses at the same time — to help calm the inner storm and to wake up in this complicated world we live in that is overflowing with endless possibilities and also obstacles. To look beyond the temporary and into the existential and eternal. 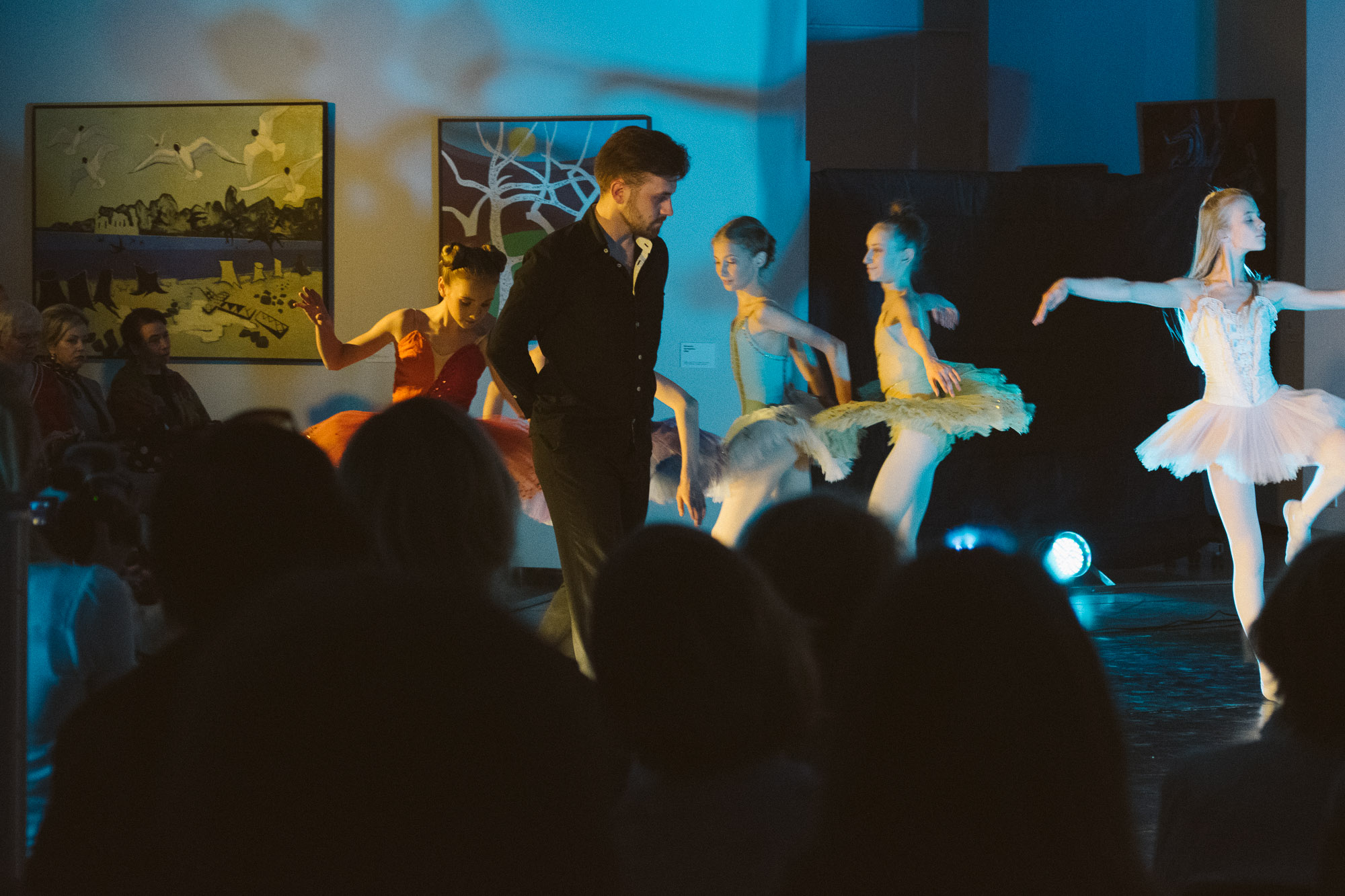 Leonards Vīksne: When we first looked at the paintings, we were instantly struck by inspiration and decided to create a one movement piece. In the end we came up with several musical miniatures, one was a tune «Stādiju ieviņu», where the dancers Justīna and Zigmārs told a story of the growth cycle, when Adam and Eve came together, a tree has grown, lives through different events and then goes back to the depths of the earth. Then our little girls danced, they were imitating different sounds using «body percussion» technique — replicating the sound of rain, other sounds of nature. My part was in the composition called «Putni», where the main focus was on the socially ecological problems of pollution, on a human beings attitude towards nature (which is close to indifferent).

We tried to demonstrate that this hypothetical person is born and lives his life not taking a closer look around him and not seeing what he leaves behind, something foul. Our kids had different roles, each represented a bird that you would most likely be able to find in our city and that would sit well with the child itself, to fit the character. And then these birds would wander their routes, the ones they were used to wander but then the human comes and ruins the course of nature and the birds slowly die, because they have nowhere else to go, their home is ruined.

The last tune was a little off the path, where we dance a variation of the jazz dance of sorts, it symbolises the light at the end of the tunnel, so to speak. After all the troubles we needed something positive, to lighten up the mood, and on a high note with a lot of energy, jazzy.

AG: I am the author of this idea and the composer of the music that was performed during the show. The composition process didn’t take a lot of time, it all happened so naturally. And of course, I stayed in touch with the dancers and choreographers, kept them in the loop, so to speak. During the rehearsals the music gained the colors I had hoped it would. In the beginning there was music, then choreography came along. It looked as though the dancers entrusted me with it and there were few corrections made in the music during the rehearsal process.

L.V.: Speaking of the dancing — it all started with the news I received, that I was going to work with two dancers from the National Opera and Ballet theater Zigmārs Kirilko and Justīne Teličena, I was slightly worried about that, since they are so experienced, but after our first meeting we found our common ground, so in the end there was nothing left of my worries.

We worked together on the creation of the choreography. I was already quite used to the idea that I am going to be the choreographer, but suddenly I realised that Zigmārs is a choreographer himself and that we can work together, in fact, we worked together quite nicely! Our main goal was to keep everything from becoming too complicated, but to show the idea of the story, to pass on the message, to show that our society has some serious social and ecological problems. The main challenge was to make the idea transparent and clear, so that the audience would receive the message sent by us.

A.G.: I was most impressed by the looks on people’s faces, how they glowed… One part of the audience perceived the show as a… show, another as a concert with additional elements in it. But I am grateful for the experience I had, it was very fulfilling to realise, that all three muses I admire — art, music and dance, could work together so finely, to fulfil each other. And also there was the feeling of some unexplainable inner peace that I felt during the preparations, rehearsals and the concert itself! 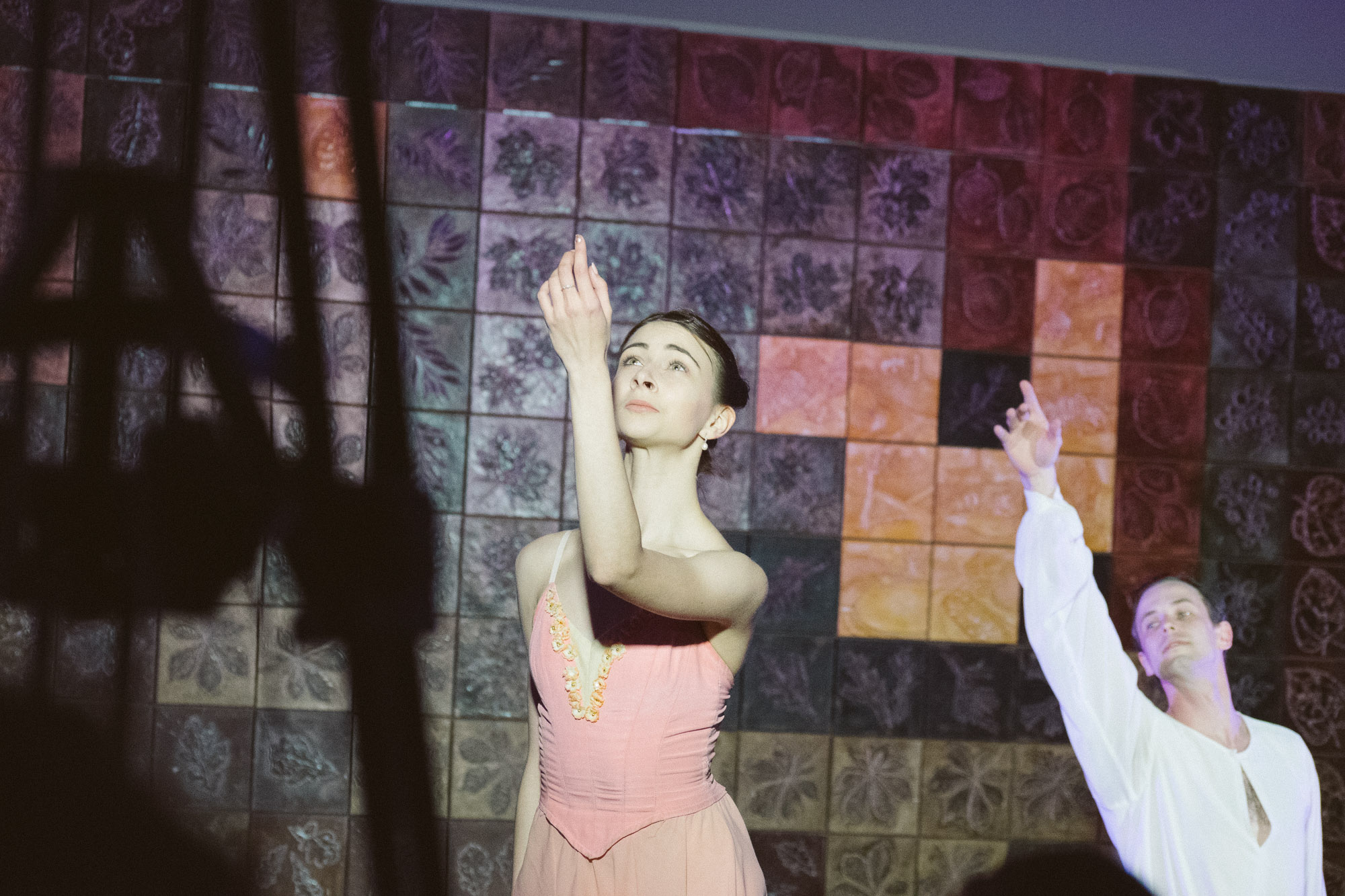 The full gallery from the event is available on our JAZZin Facebook page.