Notes on the personal journal of one Latvian mystic

Ilona Kudiņa’s impressions of the album «Anthropology» by Vilnis Kundrāts 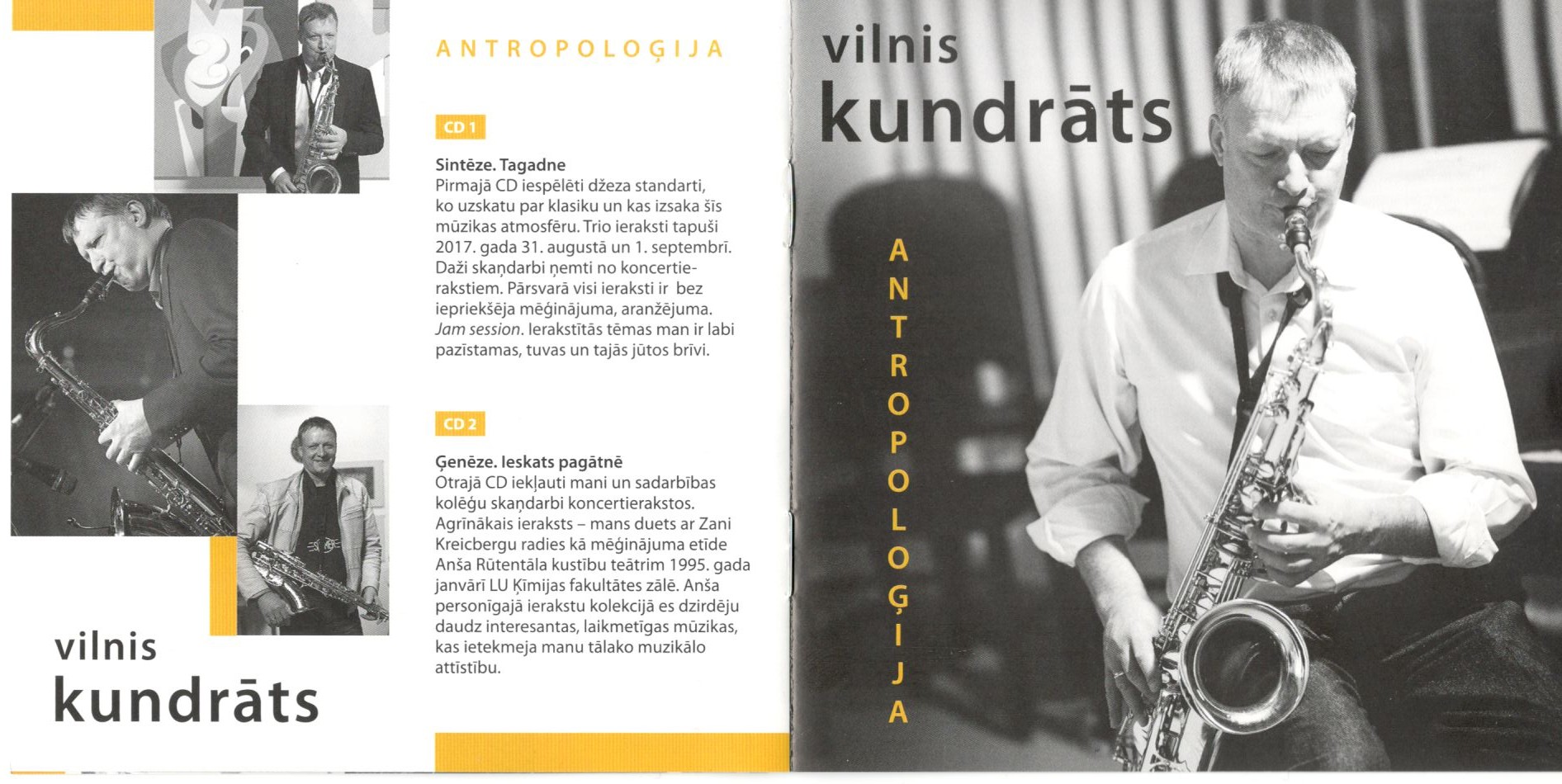 CD 1 «Synthesis. Present»
CD 2 «Genesis. The sneak peek into the past»

Vilnis Kundrāts has published an amazing musical journal that reflects everything he and his colleagues had achieved during their years together starting from 1995 and up until 2017. The design of the CD is done very tastefully by Linda Lūse. Another group of specialists deserves some praise as well, sound engineers among whom is Vilnis Kundrāts himself, Artūrs Sedriks Sinkevičs, Pauls Dāvis Megi, Mārtiņš Saulespurēns, and Edijs Gņedovskis who did the mastering.

The CD includes a brochure full with text written by Vilnis and consisting of his notes about different biographical events and thoughts on life and music, which is also very enjoyable. When I took a look at the pictures in the CD, made by Signe Ķiesnere and Vilnis Kundrāts, it made me think of the past, whether I wanted to or not, how was it back then? How did it sound?

By the way, my first reaction after looking at the pictures from the point of view of the person who lives in 2019 is that the gallery precisely reflects the spirit of the century, that boys club and these amazing vocalists and talented dancers. The female instrumentalists were practically invisible. It is such a good thing that time changes people and their point of view.

I am also sure that I am not the only one who skipped the first CD and listened to the second CD first. «CD 2. Genesis. A sneak peek into the past».

I started with the tunes that have been created in collaboration with a guitarist from Estonia Jaak Sooaar and a drummer Tanel Ruben, and also our local bass player Andris Grunte. I did this because the album was published in 2018 and this year was significant because all four countries in the Baltic states, Latvia, Lithuania, Estonia and Finland celebrated their centenaries.

The themes composed by Vilnis «Linda», «Diana» and a theme by Jaak «December» sound very interesting played by the lineup of the album. An amazing job has been done by Tanel, I have no doubts of his talent. «If you have a drummer you have a band!» Also Vilnis and Jaak’s interplay seems to have the same vibe.

I am impressed with the compositions by Vilnis «5/4», «Andra», «Alexander», «Boogie Drivers» and the lineup in the recording — Aleksandrs Smirnovs (piano), Andris Grunte (bass) and Māris Briežkalns (drums). Alexander‘s piano skills are outstanding! A fantastic use of the room, the build up of the improvisation is very good, clean music ideas and the presence of musicians that you could feel as a powerful emotional thing, the fact that they are all outstanding musicians simply helped to create the interplay, a fascinating question and answer movement, different rhythms… very impressive solos! Alexander is a true genius! And at the same time Alexander is a perfect member of the ensemble. He is able to bring out the best of Vilnis, of his compositions, of his sound, of his solo.

The oldest recording on the CD is a duet with Zane Kreicberga in the composition named «Hedgehog», the composition was born from rehearsing and etude for the Ansis Rūtentāls theater of movements in the concert hall of the chemistry department of the Latvian University. Zane’s singing is a workshop on creative thought, her imagination fascinates. Vilnis, this creative route fits you very well!

The interplay of Vilnis and Eino, together with Ivars Galenieks on the bass and Māris Briežkalns on the drums, is special. Eino’s composition «Bluesing» in the «Bimini» clubs atmosphere… A bluesy Latvian party sentiment of 1995, Riga. Bravo! Eino’s theme «Impersonal Boogie» in the rush of the «Hotel de Roma»ю The theme goes fast and very convincing.

Vilnis’s tune «Mefistofel’s Song» with an impish guitar solo by Artūrs Kutepovs and Andris Grunte on the bass, groovy drums by Kaspars Kurdeko create a demonic atmosphere in the conservative concert hall. Elegant! By the way, it was with these guys, Artūrs and Andris, exactly when Vilnis began playing his original tunes.

It is interesting to observe and evaluate how different lineups, different energies and creative ideas collaborate together and help to bring out different characters of a saxophonist, leader, composer, sound engineer that is one person — Vilnis Kundrāts… 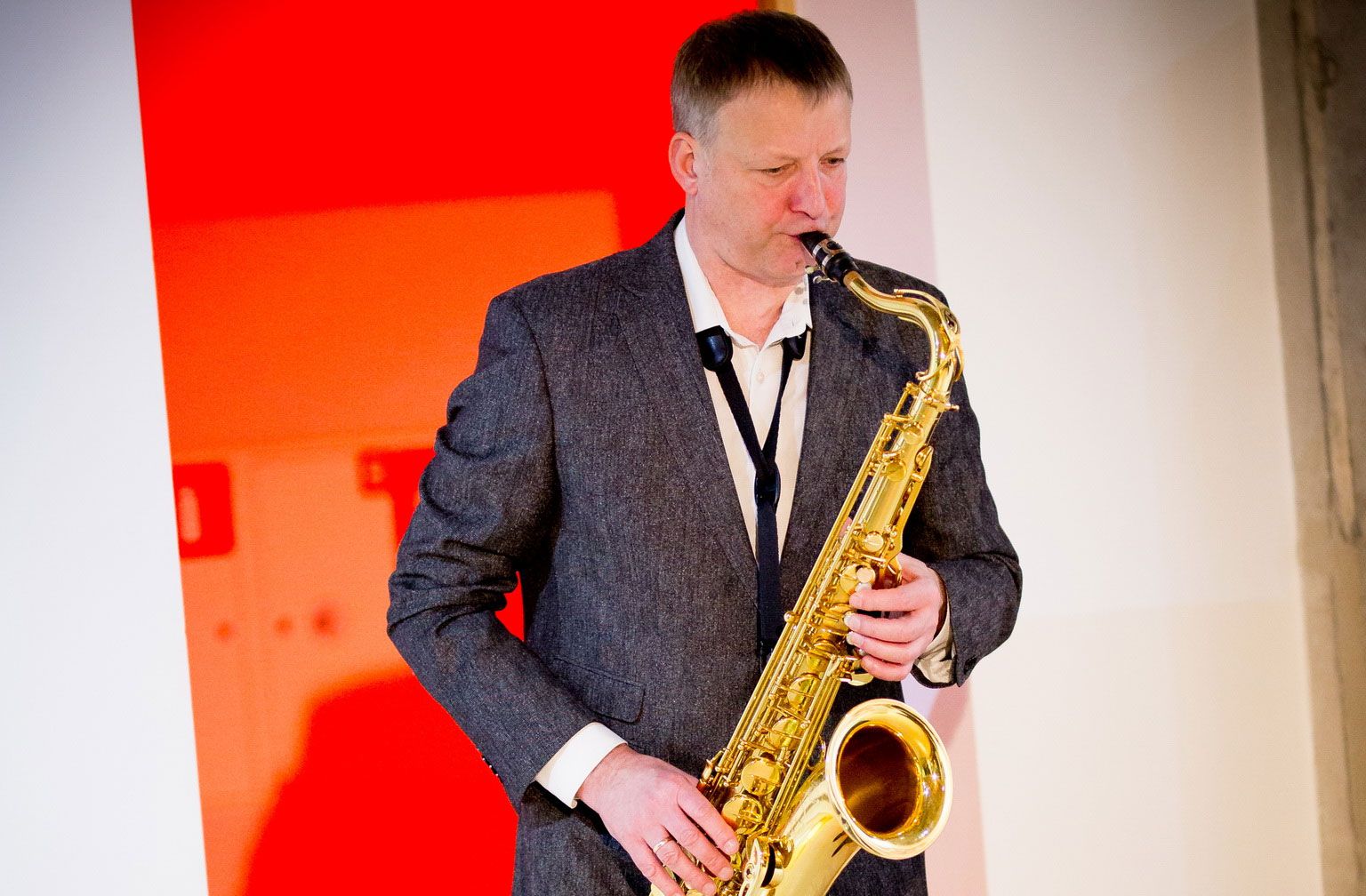 The first time I listened to that «CD 1. Synthesis. Present tense» was in a bus on the road from Boston to New York. You cannot deny that there is a certain atmosphere in the recording «Anthropology». And adept of an urban culture, a saxophonist Vilnis from a town called Gulbene plays his version of several jazz standards. It is clear that jazz music and jazz standards are close to his heart. You can feel it while listening to the way he plays the heads, the phrases are well thought through and full of emotion, the tone of his saxophone is breathy and warm, with the vibrato that reminds a little bit of Ben Webster and Stan Getz; his ornamentation stylistically is very tasteful.

The essence of jazz is improvisation. The recordings were made without prior rehearsals, without arrangements made in a jazz session manner. As a professional sound engineer Vilnis has managed to catch theses miraculous moments that are improvisation and the mood swings.

A wonderful theme by Henry Mancini «The Days of Wine and Roses» is an opening track of the part of the «Anthropology» CD that is called «Synthesis». Continuing with the Jimmy McHugh theme «On The Sunny Side of The Street», then moving on to Charlie Parker‘s «Bloomdido», and later to Antonio Carlos Jobim’s «Wave» and Duke Ellington‘s «In a Mellow Tone». A good job has been done in choosing the lineup. Vilnis Kundrāts on the saxophone, a professional drummer Artis Orubs and Zigmunds Žukovskis on the bass. A nice touch, Vilnis! Duke Ellington’s «Solitude» is fascinating in its interpretation, it brings out a sense of light melancholy. Simple, true and nothing you would want to cut! The last composition of the «CD 1» is Duke Ellington‘s theme «Don’t Get Around Much Anymore». Wonderful swing feel! Artis Orubs is a master of his craft and has a very deep imagination. If you want to dance while listening to music, then it’s a very good sign.

A pianist named Oscars Račevskis joins the band in a tune by Antonio Carlos Jobim «One Note Samba». It is a light and joyful composition. Oscars play is very tasteful, his solos are very interesting, with the dynamics that starts with a slow swing motion that turns into an exciting dance. A classical tune by Jerome Kern «All The Things You Are» sounds traditional, bright and sensitive when played by this band. Oscars sounds wonderful when playing traditional jazz! And how Artis Orubs plays drums! Amazing. I really enjoyed the mood and the sound of the saxophone, no excess. A trio made of saxophone, piano and bass. I like how the piano comps and plays solos, it is being done so carefully and sensibly. Oscars’s solos are full of respect towards the tradition and at the same time you can hear this moment of freshness of our days. Simple, true and with the right mood.

The way a Latvian jazz mystic Vilnis Kundrāts was able to navigate through the harmonies of jazz standards is admirable. It is a mystery! But the atmosphere is there!

I congratulate you on a job well done summarizing the memories of the older days and giving a chance to sneak a peek into the present time. I wish you plenty of new ideas in the future and a lot of exciting collaborations. Maybe a friendship with a bassist with an attitude and his own style would bring new colors and vibes into your music?