From lyricism to hits 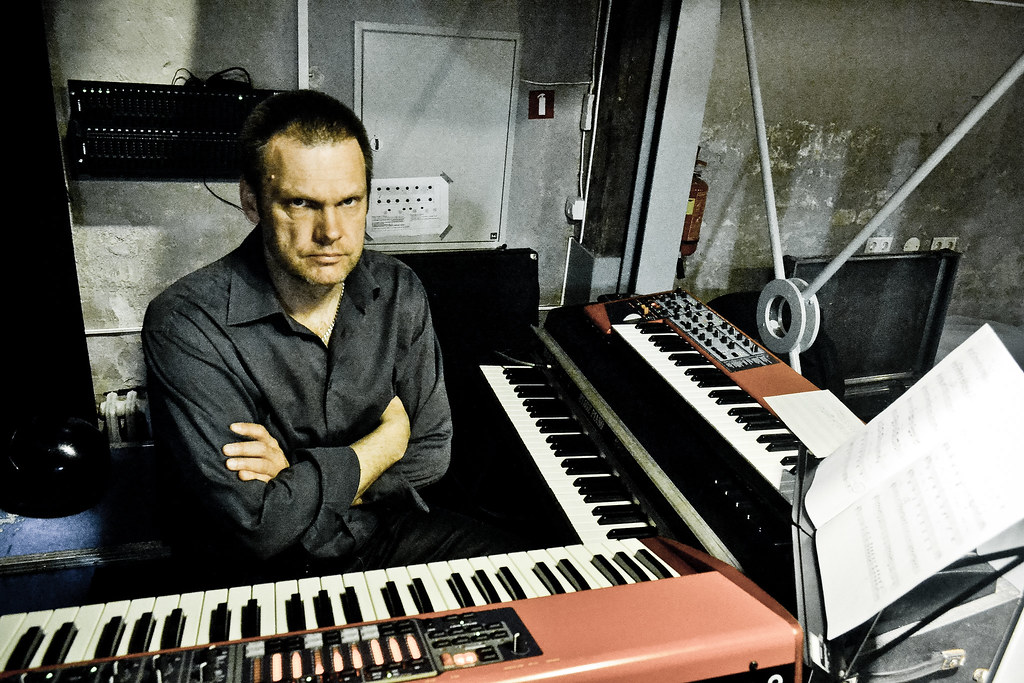 Many musicians at their anniversaries pu together a concert program that compiles memories of the previous years both musically and privately. In March at the VEF Culture Palace a composer, arranger, teacher and pianist Madars Kalniņš celebrated his 55th anniversary. Madars represents a legendary Latvian jazz generation which features Albis Zaķis, Raimonds Raubiško, Gunārs Rozenbergs and the others. He is one of the best Latvian jazz pianists, arrangers and composers, which is also proven by his musical experience — he has played at “Mirage Jazz Orchestra” for many years, collaborated with many great Latvian jazz musicians including Inga Bērziņa, Ieva Kerēvica, Deniss Pashkevich, Gints Pabērzs, DJ Monsta and the others. Madars is also an amazing composer — he is well aware of the big band work specifics, as well as musical abilities of every vocalist, uniting fresh tendencies with Latvian jazz school.

The concert began with a composition “Nejoks” (Not a joke), where the solo part was played by Deniss Pashkevich, who has worked with Madars for many years on different platforms. The duo of Deniss and Madars was heard later in the concert as well — both musicians were creating a composition of an improvised form, tempo and character. The concert program was created so that there would be a balance between instrumental and vocal compositions that are divided by creative periods. Inga Bērziņa performed two of her and Madars’ compositions. It was interesting to observe a difference between how a pianist comps instrumental soloists and vocalists. After every composition Madars told a story, connected to a previous or next composition, creating a storyline about his creative career path. One of the brightest collaboration of the previous years was the one that Madars had with Ieva Kerēvica who performed “Es klusi uzziedu” (I silently bloom) at the concert — there we were able to hear the lyrical part of Madars which fused with a warm timbre and technical performance of Ieva. later at the concert one more composition of them both could be heard — a potpourri from the upcoming ethno-jazz album. It consisted of many folk song arrangements which both of them have created together. There are different platforms for collaboration of both musicians, creating a variety of repertoire and genre, which also makes their music interesting to listen to. Ieva herself at the concert ironically called herself Madars’ musical wife, and we saw this at the concert as well, because out of all the soloists Ieva was on stage more often than everyone else.

One of the most-awaited moments of the concert was appearance of Daumants Kalniņš on stage. Even though Daumants didn’t have a huge experience of playing with Madars, nevertheless the composer wrote a composition “Mana Zvaigzne” (My Star), which was premiered at the concert, and trusted Daumants with singing it. Here we could spot an influence of popular music in Madars’s composition, which without any doubt suits Daumants. Later on at the concert the singer performed together with Ieva Kerēvica, which is musically powerful and stable duo. Talking about a musical diversity of Madars, we should definitely mark collaboration with DJ Monsta. Both stage artists amazingly complement one another — DJ Monsta enriches the musical material with various sound effects which create a full sounding, making the music to come alive and becoming pleasant to the listener’s ear.

Of course, I have to mention “Mirage Jazz Orchestra” which the listeners were waiting for right from the beginning of the concert. This is definitely one of the best big bands in Latvia, which they’ve also proved during this concert — even though each musician of the big band is a great improviser, together they create a full, rhythmical and articulated sounding that let the listener enjoy a high quality music, and the soloist — to create a stable base. The big band played some arrangements, as well as original compositions by Madars together with soloists Ieva Kerēvica and Daumants Kalniņš. At the end of the concert we were listening to an arrangement of a composition “Es meitiņa kā rozīte” (I’m as beautiful as a rose), which turned into a musical, improvised adventure for both musicians on stage and the listeners.

Madars Kalniņš is a musician who shows his tender soul through music, giving himself out to the listeners and musically supporting his colleagues on the stage. It is one of the most significant names in the modern history of Latvian jazz — a person which jazz music in Latvia is based on. This definitely was just the beginning, and it is to be continued…