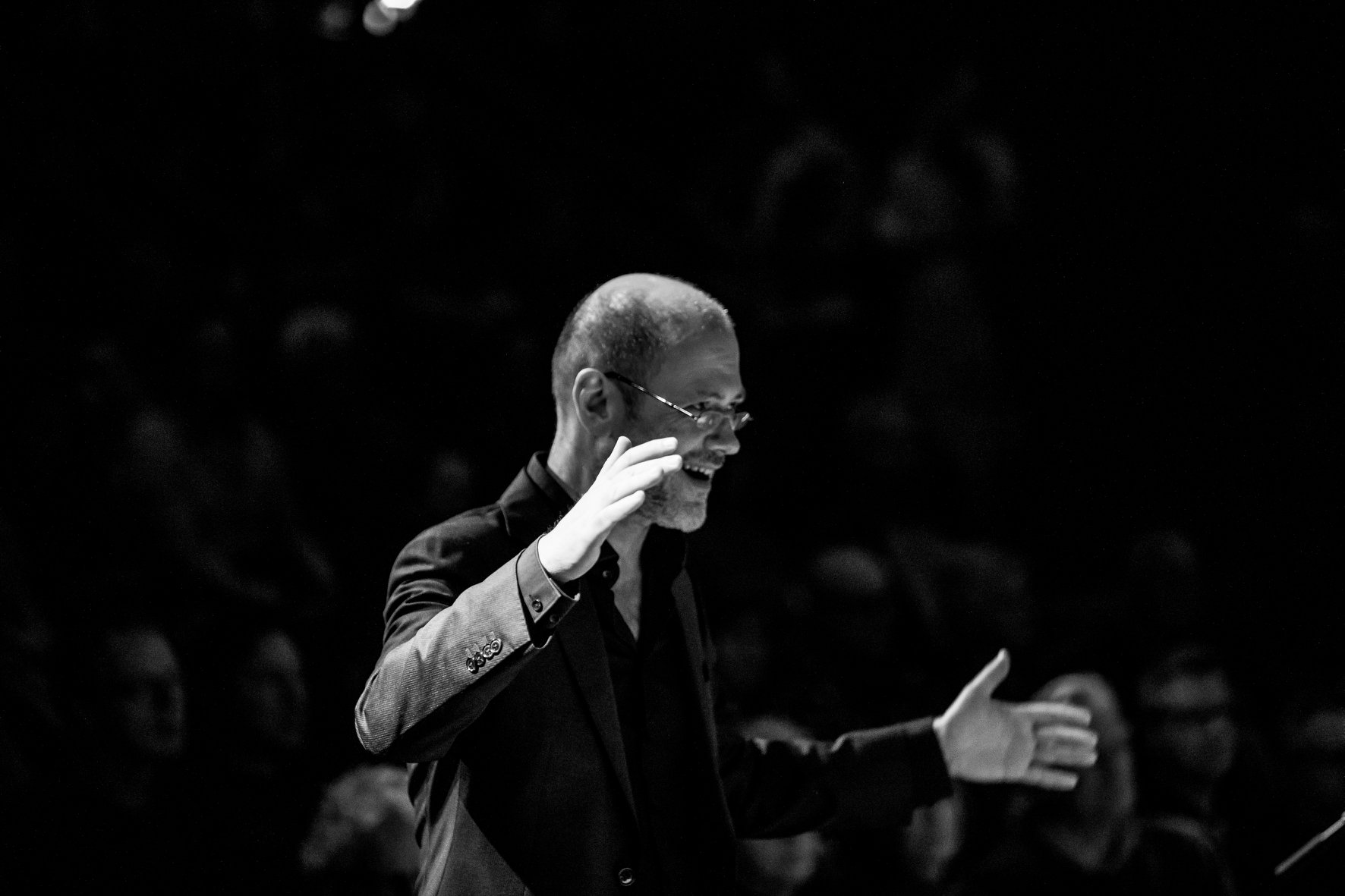 In June 2019 in Riga, at the Congress Hall, a rare event for our country took place — a concert of two big bands, featuring our beloved and appreciated Latvian Radio big band and a world-famous Amsterdam «Concertgebouw Jazz Orchestra». Every orchestra decided to perform with his own original music. In the case of Latvian Radio big band it was music from their albums «Latvian Jazz Suite vol.1» and «Latvian Jazz Suite vol.2», as well as a couple of new compositions. Amsterdam orchestra decided to play music from their new album «Crossroads».

In the beginning of the concert there was the Latvian Radio big band on stage. Right after the first composition one could understand that this orchestra won’t play music which jazz listeners are used to. Throughout all the program big band showed modern jazz music, putting a stable emphasis on musical colors. Here one could hear everything that corresponds to modern music — polyphony, polyrhythms, additive rhythms and things like that. Each composition perfectly shows united sounding of the big band, technical abilities of musicians, as well as wonderful big band soloists. At the concert we’ve heard some great performances both from the leader of the big band Kārlis Vanags, as well as Dāvis Jurka, Dominykas Vyšniauskas, Artis Orubs and some other big band musicians. There was an interesting moment when various «Concertgebouw» soloists were on stage with the Latvian Radio big band. They were showing some true professionalism, playing solo compositions with only one rehearsing day before that.

Latvian Radio big band performance was interesting and bright, however made me question things at some point. Sometimes the big band sounded like a saxophone quartet with a rhythm section, but at the same time it wasn’t clear why the trombone section couldn’t be heard at all, even though I could see that the musicians were actively taking part in the concert. To me personally the performance seemed a bit monotonous, the compositions didn’t differ a lot from one another. On the other hand, that can be considered a bonus, because there was united atmosphere and emotional palette kept throughout the concert. One couldn’t exactly spot a traditional jazz music element — swing, which is due to a musical taste, roots and generations represented by composers whose works were performed by the Latvian Radio big band.

After a break Amsterdam «Concertgebouw» jazz orchestra was present on stage. Right after the first note one could hear a great contrast to the first part. There was something that I, as a listener, lacked in the first part — swing. Compositions from The album «Crossroads», which were heard during this concert, includes more tradition-based, however still very technical jazz compositions. This big band swings! They are playing very precisely and are very technical. This big band showed us a completely different music, and did it very professionally. Also I was really surprised by the age of Amsterdam orchestra musicians. The big band mostly consists of young people, and later on I found out that many of them still study at the jazz department of Amsterdam conservatory.

Just as in the first part, this time as well the big band featured some soloists from another orchestra. «Concertgebouw» orchestra was joined by saxophone player Dāvis Jurka and trumpetist Dominykas Vyšniauskas from the Latvian Radio big band. The second part of the concert passed quickly. After the triumph of «Concertgebouw» the Latvian Radio big band appeared on the stage again to play the last piece together. They were playing some blues in a jam session format with soloists from each orchestra, changing one after another. Each of them improvised a bit. At that moment I felt very friendly atmosphere and respect between both big bands on stage, which proved that the concert had nothing to do with competition. It was all about collaboration between two great European jazz orchestras.

This isn’t your first concert in Latvia. You’ve played in Rēzekne in June, before that there was Lithuania. Tell me please about this tour. Are there any other concerts planned? Where have you played before you came to the Baltics?

Rob Horsting: Everything began in the US where we’ve played in New York. Then went to Izmir, Turkey. Then moved on to the Baltics, and after this concert we’re going to Varna, Bulgaria.

This isn’t a usual concert in the Latvian context, and it isn’t very popular in the world either to get two big bands to play together. Did you have any experience of playing similar concert with any other big bands?

Juan Martinez: Yes, we’ve played together with WDR big band in Amsterdam, «Paradiso» concert hall, great place. We’ve also played with NDR big band at one festival in Germany. I remember these two concerts so well. I think we’ve also played with Brussels jazz orchestra. Yes — we’ve experienced similar concerts, but it still is very rare for us, because those concerts usually costs a lot and demand a lot, speaking of logistics.

How do you like Latvia? It’s your second concert here within this tour. Have you played here before?

JM: we actually have. It was in Jūrmala some 3 or 4 years ago. It was our first concert in Latvia. The second was in Rēzekne, in a great concert hall. The audience was really great as well — we’ve played a nice concert. But this time is our first time in Rīga. It’s very beautiful here, as we see. Of course, we just came this afternoon, and immediately went to rehearse…

RH: And we went through this park (Bastejkalns). That one looked beautiful. And we’re happy to have such a nice weather.

JM: Yep. We’ll have some free time to walk around a bit, and I’m really looking forward to that.

How do you like working with the Latvian Radio big band?

RH: This was a great orchestra. They have amazing soloists. We will be playing with a couple of them at the concert. At today’s rehearsal we instantly got what we aimed for. Everything was good. Great soloists. Some of our guys will also solo with them, and I’ve heard the music they’ll be playing. A nice one, fresh sound and great arrangements. At the end of the program we’ll be playing one composition together, and today it sounded just fine. It’s been a pleasure to collaborate with them.

Can you tell me more about the music you’re going to play tonight?

JM: We will be playing compositions from our latest album called «Crossroads». The album consists of compositions written by our very own musicians. Those are 10 compositions, arranged with the help or professional international arrangers. It also shows international mood of the music we’re playing, and it’s pretty close to who we are and what we do. Last week we’ve also heard how our album got an «Edison» prize.

Congratulations on that! It’s great to know. So both big bands will be playing their own compositions. Tonight you’ve heard compositions by LRBB musicians. Did you have any experience of listening to some Latvian or Baltic jazz before?

HM: I have, but just a bit. I’ve heard Kestutis Vaiginis from Lithuania because he studied in Holland. As well as a couple of students from the Baltic countries who have been studying in the Netherlands, but to be honest, I haven’t heard any bands from the Baltic countries. So I’m impatiently waiting for tonight’s concert. I’ve heard many good things about your big band.

RH: Actually three weeks ago I’ve been a member of the jury in one big band contest in Amsterdam, and one Latvian big band took a part in it. If I remember correctly, it was called Jelgava youth big band. They took the first prize. It’s a great orchestra that played lots of nice music and did a good job.

Actually the popularity of big bands here grows a lot. We have so much student big bands in all regions. As I know, the situation in Europe is very similar. There’s a lot of professional big bands in Europe, similar to NDR, WRD big bands and «Concertgebouw» jazz orchestra. How do you see the future of the big bands and jazz music in Europe?

HM: We began in the 1990’s, and at that time big band music was considered a dead end. It was the «music of the past». Our goal was to play new music and integrate fresh sound into it. Our aim wasn’t to play the music of Count Basie or Duke Ellington, but to renew the repertoire and play modern composers and their music. I think the big band perspective slowly changes. A couple of years ago big band music was considered nostalgic, but today it has really changed. It’s great to see how it works in the Baltics, how the audience for big band music grows here. Because I think there’s a musical potential in big bands. There is a lot of opportunities. And Rob is a great example of an arranger who does all those new and good things for the big band music.

Rob, what are your comments on it?

RH: We play various musical styles. «Crossroads» is our very own album, but we also play some music of Ray Charles and Stevie Wonder, Nina Simone and Aretha Franklin, so we’re doing a lot and always try to create something new out of this music, create our own arrangements. We’re trying to do our own sounds and solos. The music is very popular and it attracts the audience, but we still can get something for ourselves.

Do you make the songs more modern?

RH: Yes, we do, making them more ours. Because of this we get a wider audience and many new people who get to know us better.

HM: Our motto is «Unite through jazz». Uniting begins among musicians, and musical styles as well. Sometimes we perform with classical pianists as well, with some world music and pop music representatives. And there’s some connection with the audience as well. You give something to the audience that they already know, but add something new which they don’t know yet.

What is the future of your big band? Which concerts will be played and which albums recorded?

HM: Quite a busy year we’ve had so far. When we’re back from Varna, this summer we have a lot to do. Some significant concerts. North Sea jazz festival where we will be playing «Crossroads» and after that, two weeks later, we’ll perform at a big Pop festival in front of a 250 000 people audience. This will be the first time when jazz will sound at this festival. I think it’s a great example of «uniting through jazz». We will be playing a gospel repertoire. Then in September we’re going on tour to Moscow and China. After that in autumn we’ll do the Nina Simone program with a Hollandaise singer Sabrina Stark. She’s a great Nina Simone interprete. And we’ll begin working on our new album. We have asked a Holland millennial band to compose for a jazz orchestra. Earlier we’ve invited people play with us, arranged their music, but now we’re asking them to compose their own music. To become composers. To give us their view on modern big band music and view on the «Jazz Orchestra of Concertgebouw». The process is already on, and Rob is working on it. It’s an interesting choice, if you know some young jazz musicians from Holland, for example, Joris Roelofs, Ben van Gelder. They will be composing some music for us and we’ll see what happens. In September we’ll first try it out in Amsterdam, and in January record the new album.

Would you like to return to Latvia or the Baltics with more concerts?

HM: Well, after what we’ve seen here and people we’ve met, I’d like to return.

RH: And the concerts were really nice, the listeners were surprisingly smart.