After a regular concert in a Trompete jazz club we unexpectedly received an invitation to travel to the South part of Europe — Malta, and give workshops to the local music school’s students, as well as to perform in the capital city’s jazz club «Offbeat».

The same evening we played at Trompete one of the patrons was Malta music school’s jazz department coordinator, pianist Joe Debano, who came to Latvia with his colleagues in a mission to establish new contacts and to research specifics of our jazz education. And Joe was exactly the one person who issued an invitation for us to go to Malta. When we received compliments from Malta’s musicians, they also shared their observations concerning our music education system, where the high level of theoretical knowledge in our high schools was pointed out as exceptional. Probably that’s a huge reason for the fact that our local musicians often take high places in some international competitions. Jazz musicians are not an exception. As a nation, we continue our growth in this musical genre and at the same time form our unique image on the global music scene. In my opinion, the invitation we received is a proof to the things stated above. That is to say, someone else, not from our circle is able to appreciate in and wants us to share our knowledge.

To this Southern European island I went together with a pianist Atis Andersons and a drummer Jānis Jaunalksnis. Even though throughout the years spent playing jazz standards together we have established a great musical contact, some sort of chemistry between us, we realised that in this trip we do need something that would represent our local jazz identity. That’s why we decided to include into the program some compositions of mine and some Latvian folk song arrangements. The audience’s response to that was amazing, although we’ll leave this topic for a later time. 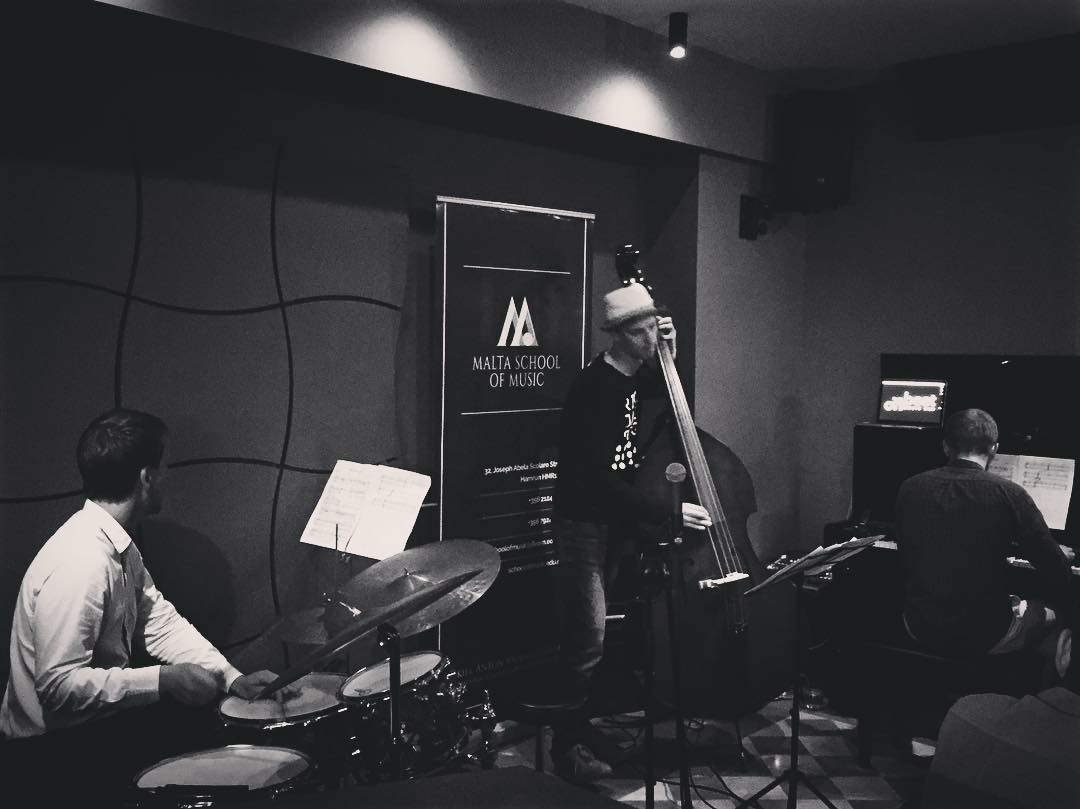 From the artists personal archive

The first part of our trip though was to give workshops to the local music schools students. The target audience — youngsters of middle school to high school age, some of them have already decided to follow the professional music path later on. We decided to choose a relatively free format of the workshops to share our knowledge and together with the students prepared a concert program, which from the organizers’ point of view was one of the main goals of this collaboration, thus motivating the students in their further growth.

During the workshops and the preparation of the concert program we discovered that what we were suspecting to be true was confirmed indeed — there happen to be significant differences between Latvia’s and Malta’s educational systems. Thus, each thing said, even seemingly simple, gave a good push in the students development. Of course, it’s always a good and a pleasant thing to observe when you’re a teacher, inspirator. Probably it’s not as surprising, considering the number of island’s inhabitants, it’s geographic location and size.

Our performance in the «Offbeat» jazz club was an important component of our trip. Considering the fact that we broke a record of the clubs attendance rate, the interest from the locals was huge. When we played my own compositions, and the arranged Latvian folk songs, we’ve managed to charm the locals with our national jazz message. A proof to that was seen in the amount of the «Holographic Projections» CDs sold, but also a request from one of the students to share the arrangement of «Meita Gāja Uz Avotu» tune in order to learn it later with one of her bands.

All in all the trip resulted with a huge amount of positive vibrations and memories. Malta is a wonderful land. We hope to go back there someday.