Pete Madsen on his journey in music, education in Latvia and America, and a joy and skill of teaching

It already was spring when the jazz department gave birth to a big band, uniting RDCS and JVLMA students. Even though the big band leader is a Latvian well-known saxophone player Dāvis Jurka, the very first concert involved an American guest Dr.Art Pete Madsen. I met Pete to talk through a couple of topics, paying a special attention to differences between America and our very own educational system. 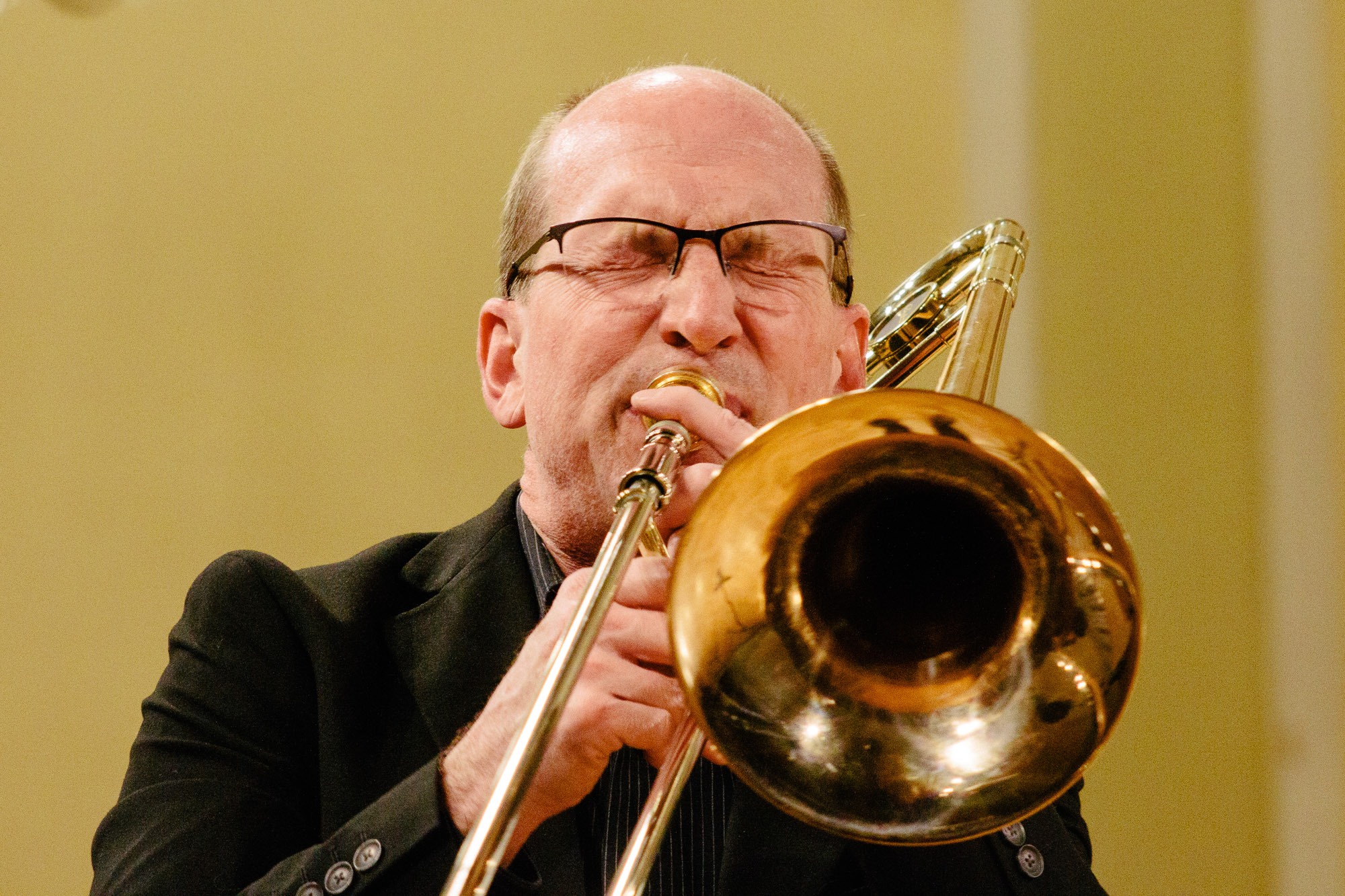 You have a doctor’s degree! In jazz?

Well… My doctoral degree is actually in classical trombone. But my job while I was earning my degree was with jazz at the University of Illinois, which is a huge school, I had a teacher’s assistant job. I do both — classical and jazz trombone — as much as possible, even when working on my degrees.

How did you end up in jazz, when you’re a classical trombonist?

Actually I’ve always done both. But jazz has always been my favourite thing to play and to teach. But I think that things are a bit different in the US, because I’m learning so much about how things work here, about the academy and it seems like you’re either a jazz student or a classical student, and in America it’s not necessarily the case. Students learn both classical and jazz at the same time and with only one teacher that teaches both. And that’s what I do too! I direct the jazz band, but I also teach trombone lessons, and those lessons are mostly classical, but we do some jazz work as well.

Well, I suppose that with an American background your average student knows more about jazz than our local guys…

The biggest difference from America is that here you’re either a classical player or a jazz player, they don’t cross. It’s very different in my school. And then there are the specialised schools you have, like RDKS, we don’t have that. It doesn’t exist or not nearly to the level it does here. All the schools are pretty similar — you take math, English, history and then band is an elective class — you can take band, you can take choir but the idea of specialising in music at that age almost doesn’t exist. They usually start playing in middle school (age 12-14), and maybe they will have a very good band teacher or a better jazz band than in another school, but anyway, they are less concentrated on music there that in RDKS. I suppose you have less in numbers, but probably way better quality, the students here they play really well!

Thanks! On behalf of the students that is! So you came here to work with our big band?

What are your impressions of our jazz department so far? You’ve been here for 3 days already.

I’m really impressed with what’s happening in the jazz area, I didn’t understand until I got here that this is the first big band concert, which is really exciting. I think it’s really interesting to know that the school is starting a big band. In America it’s usually the opposite. Usually in high schools (age 14 to 18) most of them have big bands, but only few of them have combos. Here it seems to be the opposite — they have combos everywhere and only now are starting a big band.

Well, you have to give us some credit, our jazz department is less than 10 years old, you know?…

Yes! And the students are great! 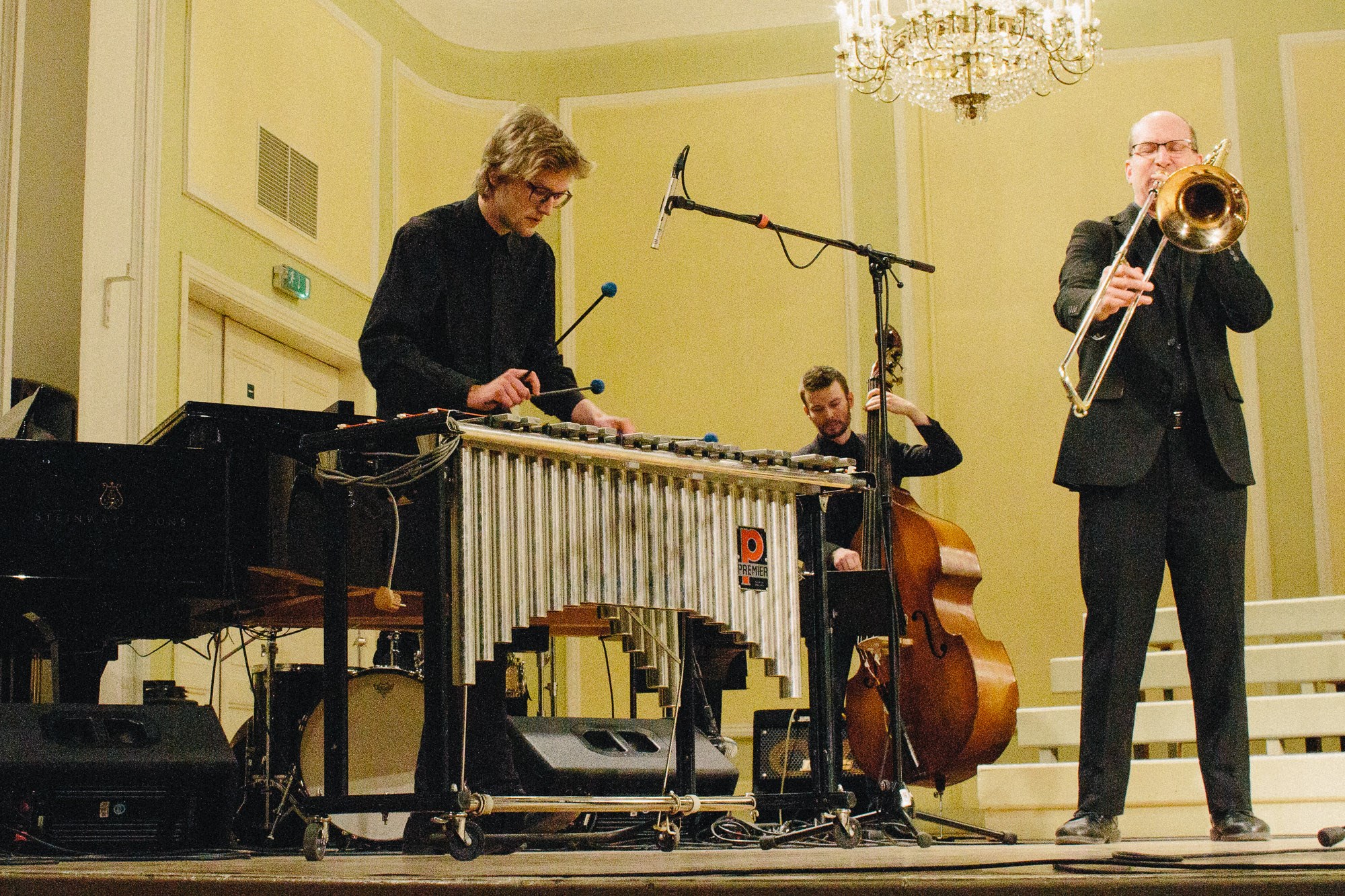 What are you working on right now?

Well, with the big band I’d sent music in advance so that they could rehearse it. I tried to pick a wide variety of music that I thought they would not have typically played before, but I guess since it’s the first concert all music is new. We are doing two Count Basie’s songs, couple of tunes by more modern composers, a little bit of everything — traditional, Latin jazz, modern tunes.

What are the challenges that await the guys since they are just starting a big band?

I did a workshops with trombonists, there were maybe 7 of them, and they had a lot of questions about articulation, which I thought was interesting. Maybe some of the challenges are the language, I suppose some articulation challenges may be due to the language you grew up with.

You are actively involved in classical music as well?

In America it’s mostly like that, people tend to do both. For instance, in November I performed with Omaha Symphony, in May I’m playing with a brass quintet, and that’s also classical, but I also play in a group called The Nebraska Jazz Orchestra. Mostly what I do is teaching at the university. That’s what I love doing. I see myself primarily as a teacher. I really love watching the students improve and grow, mature. Most of our students want to become music teachers in the same area where we are. It’s fun seeing them being 18 years old, entering the university, then graduating and becoming the teachers themselves!

Do you go to jazz concert often?

When I can. I wish I could go more. I often have my own performances, of my students’ performances, I also have a wife and two children… So in between all that there are times I just want to stay home. But we have a really great arts center, the Holland Performing Arts Center in Omaha, they bring in some really great jazz concerts, I go there quite often.

Do you attend jam sessions?

Not anymore, no. When I was younger, then yeah, but sadly I have no time any more.

How important it is for a jazz musician to go to a jam session?

For a young musician — very. They should go as much as they can, which was what I did when I was 19-20 years old. I would go out any chance I got, I would play with everybody and anybody. It didn’t matter if I were payed or not. It’s the only way to learn how to play! It’s one thing to sit in a practice room and practice, which is important, but you have to play with other musicians, with the ones that are better than you.

If we talk about the so-called grown up musicians, is it important for them to go to a jam session?

Sure. I guess the same thing as a younger musician it’s a chance to play with other people, learn new songs, get acquainted with new people. It’s kind of sad, we don’t have a lot of jam sessions. It’s mostly due to financial reasons. You have a stronger jazz community here. All in all I have an impression that jazz is more appreciated outside of the US. It might be different in bigger cities, but Omaha is a relatively small place. 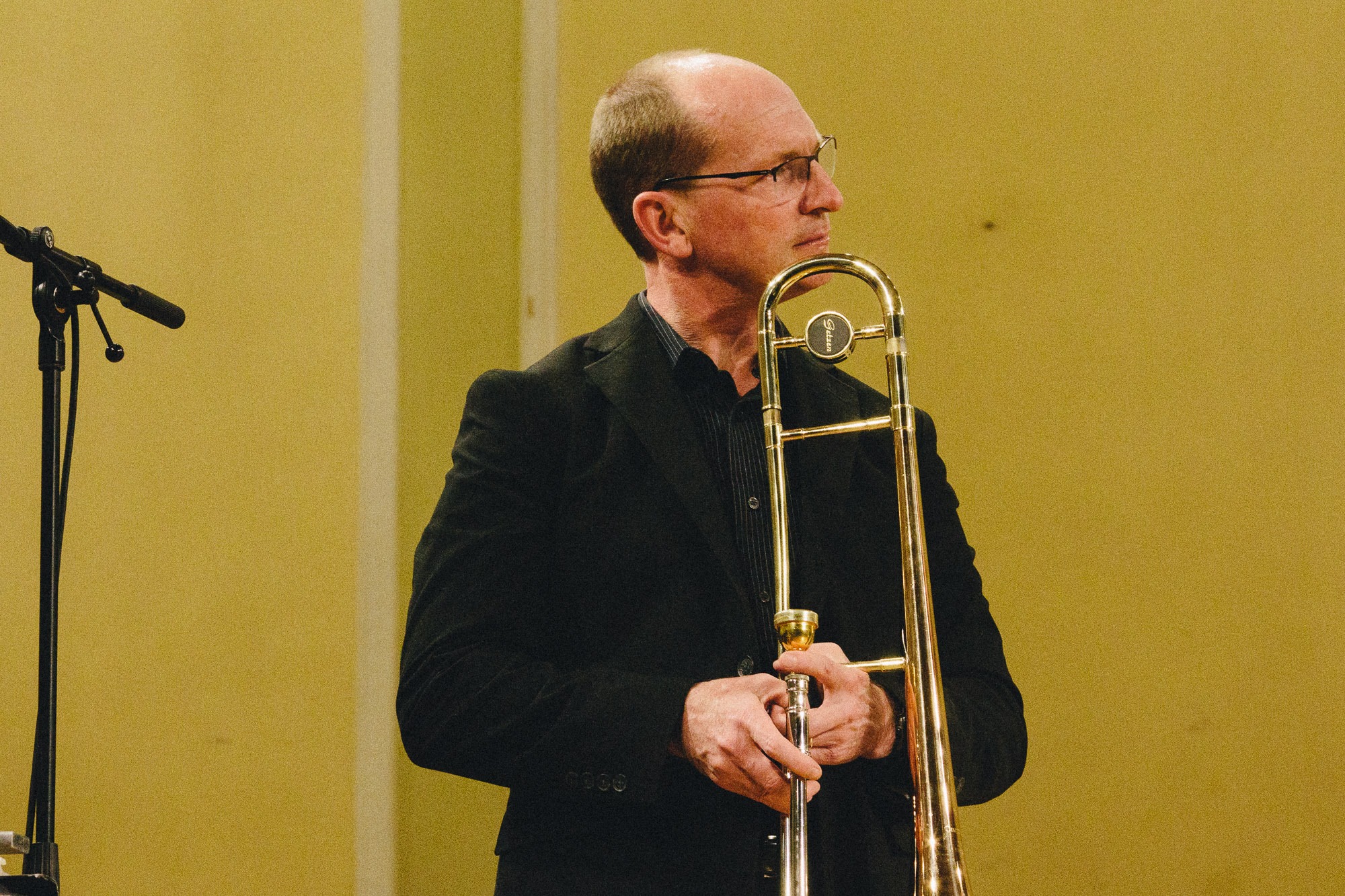 Let’s suppose a young (or old) classical musician comes to you and says — I want to learn jazz! What would you do? How would you teach him?

Most of the students I work with haven’t had a lot of jazz experience. Maybe they played in their high school jazz band, they probably hadn’t had much experience in improvisation. We start with the things like transcribing solos, that’s basically the only way to learn the style — you listen and imitate. Learning more about the theory, chord structure, things like that. The blues, simple basics, is always a good place to start.

If a non musician comes up to you and says — I want to know more about jazz — what would you recommend?

We actually teach a class in the university, it’s kind of like a jazz history class but very simple. I always start by trying to get them to live concerts, because if you listen to recordings it can sound kind of random, it’s so different when you see it live, so when I used to teach that class one of the assignments was to go to a jazz concert and then write a paper about it and many papers started with: this was the first jazz concert that I’ve ever been to in my life… And this is in America! And I figured as a teacher that that was a success right there. That’s a very important thing to get non musicians going to jazz concerts. The easiest to comprehend is usually a big band concert, so you should start with that. Go to a big band show!