The bassist about the bassist

It’s time for JVLMA students to speak up! This essay was written by a graduate of the one and only jazz department, who plays double bass and recently got his bachelor degree, but while still a student he did a research on one of the most famous Latvian bassists — Boris Bannykh. Since this year Boris has celebrated his 70th anniversary, we decided it would be best to share the work that has been written during a course by Indriķis Veitners on the history of jazz in Latvia, because you just have to know your heroes! A huge thanks to Jānis for a work well done and to Indriķis for motivating the students to do this kind of research. Also a huge thanks to both of them for allowing to share this information with the public, I think this is very important, because until a big book is published, this is the only place where a person would be able to find this many facts in one place! So we wish you a pleasant reading and get ready to enjoy and be amazed!

Boris Bannykh is a name that is known to each and every person who has been interested in the best and most sought after rhythm section musicians in popular and jazz music in Latvia, starting from the 70’s and up to nowadays. While playing both double bass and bass guitar, Boris has participated in a huge amount of recordings and concerts with such stars of Latvian music scene as Raimonds Pauls, Zigmārs Liepiņš, Gunārs Rozenbergs, Raimonds Raubiško and many more. Probably his name is not heard as often of as those mentioned above, but nonetheless, it is absolutely clear, that to all of those ensemble leaders a bassist such as Boris was an irreplaceable and necessary part of the band, not only due to his musical abilities, but also because of the kind of a person he was. 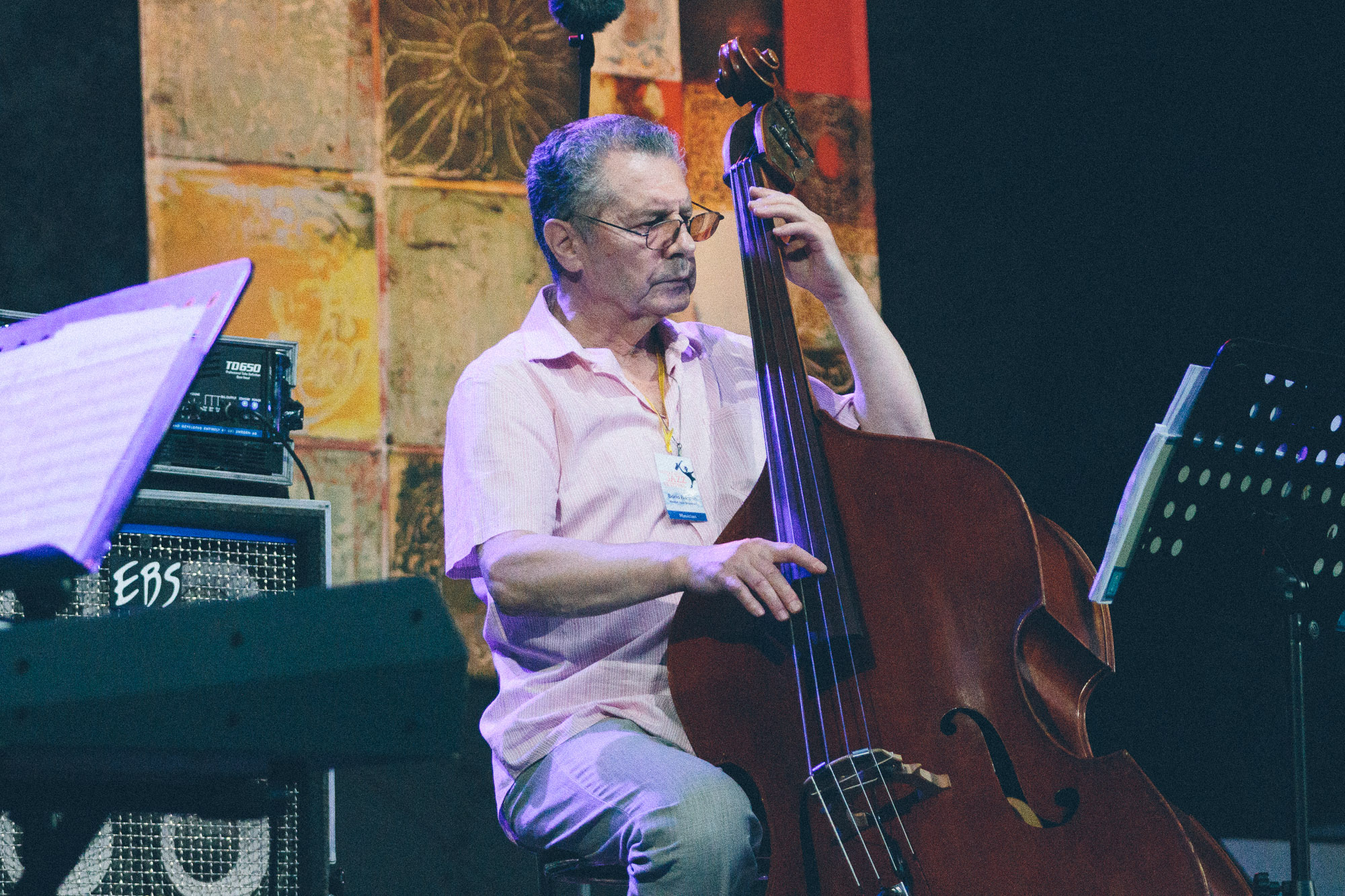 Boris was born in 1948, on the 8 of July in Chernivtsi, Ukraine. His father had a high rank in army, and due to that the family had to move a lot. The family lived in such cities as Kharkov, Leningrad, Moscow, and most of all in Voronezh, where they stayed the longest during Boris’s fathers service. In that exact city Boris has started his musical education, although not finished because of the move to Riga in 1966, after his father’s retirement from the army.

In Riga Boris had studied chemistry in Riga Technical University and at that time got acquainted with a double bass player Viktor Avdiukevich. Viktor arranged for Boris a spot in an army Wind Orchestra, where Boris got a chance to perfect his skills. About this experience Boris himself says: «Thank God I had a chance to play there!». At that time the conductor was Jakovs Raskins who arranged classical pieces of Bach, Beethoven, Rachmaninov and others for a wind orchestra. The discipline level was very high and rehearsals took place every day, which in turn was a very good practice for a young double bass player.

The interest in jazz was born during Borises studies. One of the most influential artists in Boris’s life was a trumpetist Clifford Brown, but in terms of local musicians — Vadim Viadro, who was one of the first to involve Boris in playing jazz in Riga. Together with Viadro they formed a quartet of drums, double bass, piano and a saxophone, but when a pianist Naum Periferkovich moved to Israel the band stayed playing in a trio without a harmonic instrument. It’s important to note that a trio without a piano, that also played a pretty aggressive and atonal music, was a quite unusual ensemble, and a number of people weren’t keen on listening to this kind of music. But thanks to the band, and their repertoire, and a very energetic playing style, the lack of piano wasn’t that noticeable. The band often performed in a popular local jazz club «Allegro» and traveled to play in festivals in the countries of Soviet Union, they played in such cities as Vilnius and Moscow, as well as many others.

The next step in Boris’s career was a job in the Radio orchestra. He got that job after the previous bassist Aivars Zītars moved to Canada.

Also at the same time period (the beginning of 70’s) he met a drummer Vladimir Boldirev. They formed a very successful collaboration, the duo was invited to play by noticeable masters, for example — a trumpetist Gunārs Rozenbergs. The reason was that together with Vladimir they had a very powerful groove. That is how a band called «2R+2B» was formed, the name of the ensemble consists of the musician surnames — Rozenbergs, Raubiško, Boldirev, Bannykh. The peak of that band was during a festival in Tbilisi in 1978, after which a newspaper «Soviet Culture» (Советская культура), that was a main issue about culture, named Bannykh and Boldirev the best rhythm section of the Soviet Union.

The music of «2R+2B» was a mix of bebop and free jazz, with the elements of aggressive swing and very long and expressive improvisations. The concept of the band was similar to the one of Ornette Coleman’s free jazz quartet of the 60’s. It is very surprising, that at that time it was even possible to travel around Soviet Union playing that kind of music, because as Boris admits, there was a saying: «today you play jazz, tomorrow you’ll sell out your motherland.»

During the same years Boris has collaborated with a Georgian guitarist, Latvian resident, Vesarion Bakradze and a saxophonist Vladimir Vainer. All together they played jazz rock and fusion. With this band they have also played at the same jazz festival in Tbilisi in 1978.
As a bass guitarist in 70’s Boriss has collaborated in a legendary band of Raimonds Pauls called «MODO».

At that time only the best musicians were selected to play in this ensemble, including a pianist Zigmārs Liepiņš, guitarist Viacheslav Mitrokhin, and Vladimir Boldirev as mentioned above. The leader of the ensemble was Raimonds Pauls, and that was functioning as a comping band for most popular soloists of that time — Viktors Lapčenoks and Nora Bumbiere, Mirdza Zīvere, Imants Vanzovičs and others. Sometimes the band performed instrumental pieces as well, one of those is caught on film in a concert movie shot in Leningrad in 1976 and called «City. Autumn. Rhythm.» („Город. Осень. Ритм.»)

On November 22nd, 1978 Boris has severely suffered in a car accident. After the accident for a period of time Boris had lost the ability to fully move and a part of his body was paralyzed. He had to learn the basic acts of life from scratch. The rehabilitation process lasted approximately half a year and after that he received a disability status. The accident and it’s consequences were horrible, but they didn’t diminish his will to live and to play, so as soon as he was able to, he got back on the stage.
In the end of the 70’s and the beginning of 80’s Boris was invited to participate in three legendary album recording sessions. One of them was a funk jazz and disco album of Gunārs Rozenbergs — «Laura», recorded in 1979. This album was highly demanded amongst the jazz lovers, because of the amazing musicianship of the participants, a tasteful stylistic solutions and the fact that it perfectly reflected the esthetics of jazz and pop music of Latvia at that time. The same year and album by Raimonds Pauls «Sister Kery» («Māsa Kerija») is released, which consisted of the songs from the musical with the lyrics by Jānis Pēters. But in 1980 another album of Maestro Raimonds Pauls is released — «My Way» („Mans ceļš»), which consisted of the cover versions of some popular tunes, such as «My Way», «Et Si Tu N’Existais Pas», «Stayin’ Alive» and others. 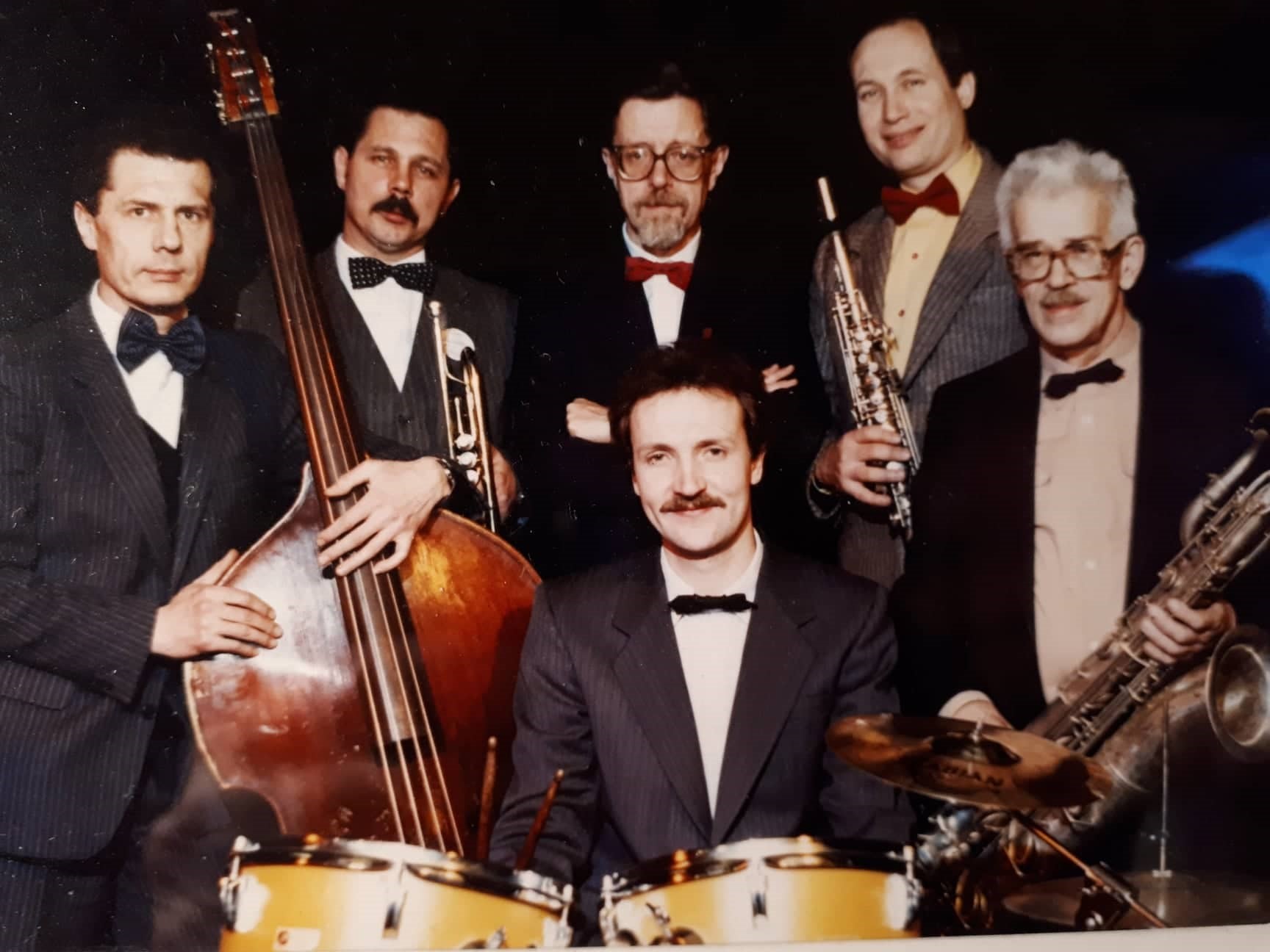 Boriss has named two events as the most memorable of the 80’s and 90’s. One of those is a collaboration with Ilga Bērziņa, a pianist with whom he played a lot in a club/restaurant «Do, Re, Mi» and with whom he performed in a famous and respectable jazz festival in Finland «Pori Jazz» in 1989. Another one is a collaboration with a band based in Russia — «The New Moscow Jazz Band”. Boris stated that this band was very high class, which is also proved by the amount of performances abroad — in Germany, Holland, France and other countries. One of the most memorable performances of this band was in a festival in France «Jazz in Marciac» in 1991, where the band played along with such noticeable musicians as Wynton Marsalis, Gerry Mulligan, Dee Dee Bridgewater, Modern Jazz Quartet, Stefano Grappelli and others. An interesting fact — the band left for the festival from Soviet Union, but upon return the country didn’t exist anymore.

After Latvia gained its independence, Boris has continued to perform, although states that those times were «ceazy» and «unlucky» because none of the bands formed survived due to different reasons. In the beginnings of 2000’s a legendary band «MODO» was formed again, but also for a short period of time, including an anniversary concert of Raimonds Pauls. One of the most recent bands with Boris’s participation is «Modal Jazz Quintet», that has performed in 2016 at Saulkrasti Jazz Festival, featuring Indriķis Veitners on saxophone, Lauris Amantovs on trombone, Artjom Sarvi on piano, and a Lithuanian drummer Vlad Zelkin who currently resides in the United States.

To conclude this essay — maybe Boris’s name isn’t that well-known to the wider range of the listeners, comparing to such famous ones like Raimonds Pauls and Gunārs Rozenbergs, but if you summarize all the recordings he participated in, all the international concert experience and the musical collaborations, it is clear that the history of jazz in Latvia, especially during the 70’s, 80’s and 90’s isn’t complete without mentioning his name..