One of the brightest performances of the JAZZAHEAD! showcase program

JAZZAHEAD trade fair is famous not only because it’s the biggest event in Europe dedicated to jazz music that gathers participants from and experts in every kind of business somehow connected to music — starting from, of course, musicians, and up to photographers, managers, agents, festivals, press, you name it, they have it. This event is also a huge jazz festival that hosts performers from all parts of the world, and these performances are called showcases. The point of these concerts is to connect up and rising artists with venues, festivals, labels and others that could be interested in them. In short — it’s an audition, and the artists that get to play at the showcase are truly the best and will get a booking in 99% of the cases (because absolute numbers are impossible in real life, ok?). While Europe hosts an enormous amount of different showcases, this is the only one dedicated solely to jazz and for an artist of this genre it means a lot to be selected as an act. Each year the event program is divided into regions, usually one night is dedicated to German artists, another one for European, one for the acts from overseas, and one dedicated to a region of choice, this year it was Eastern Europe. The Baltic States were lucky enough to be represented in the showcase program as well, unfortunately with only one act, a young and a very promising pianist from Estonia Kirke Karja, and we are extremely glad and proud of our neighbours. Hopefully next year will feature someone from Latvia as well.

But that is just a foreword, let’s get straight to business! We, Latvian delegates, were lucky enough to attend a couple of concerts as well. This years program had a lot of well known names, like Justin Kauflin, who has been to Riga with a concert a couple of years ago, Jazzmeia Horn, but my intent was to hear one specific act, that is not that well known in Europe and that comes from Australia — M&Jam Experiment. I myself tend to use some electronics during my performances, which isn’t that popular in jazz, that’s why I’ve been browsing the web in search of inspiration and there I suddenly found a familiar face organising a crowdfunding campaign raising money to release an experimental album: audiovisual performance where artists use all kind or gear, from harmonisers to loopers and such, combining it with visual effects. I did donate an amount of money and received a DVD as a perk, but soon after watching I realised that I just have to see and hear it live, because the effect should be totally different. Top it with the fact that I know the lead singer personally and as a result you get a very intrigued me. I have to admit, that while knowing Melissa (the lead singer) for a couple of years, I had no idea that in her performances she uses the same effect unit as I do — a TC-Helicon VoiceLive Touch 2 but in an advanced way, I, in comparison to her, am a complete amateur, because that girl manages to create polyrhythmic melodies in a relatively simple looper, which I’m far from mastering. 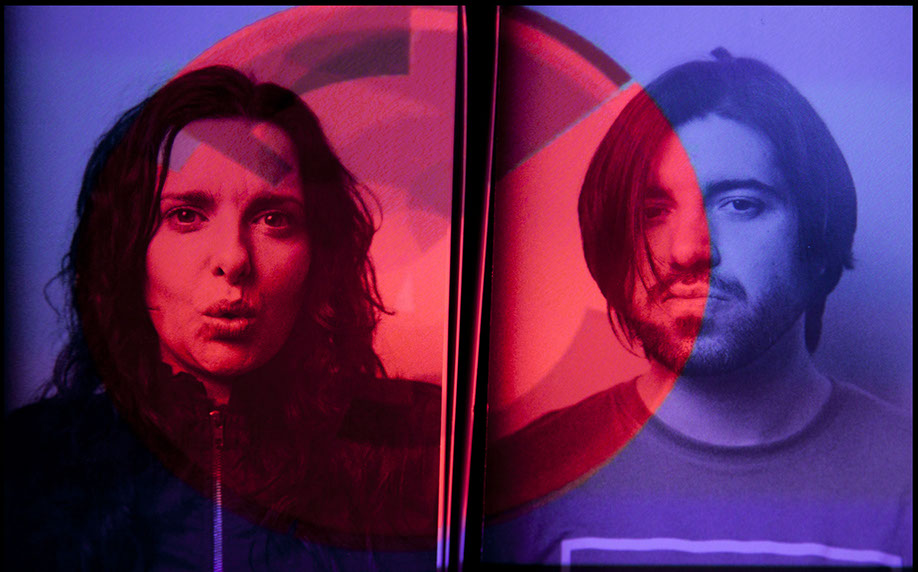 Being a curious creature, I realised that I wanted to be fully ready to take in their performance and not sit there in the hall guessing what is being done at a certain moment of time, that’s why I decided to catch Melissa and Jam before their show for a short chat and figure out these technicalities that make their performance a magical thing.

M: We are M&J Experiment.

You are participating in JAZZAHEAD showcase concert this year, congratulations!

M: Yes, we’ ve got the overseas night concert, we are very excited!

Tell me about this project! Is this the same stuff that’s on the CD that I have?

Jam: Basically, essentially it’s the same thing that we have on the DVD, just with a little update in terms of stage decorations, the overall technology in it, cause we have lights now!

What kind of stage decorations are we talking about?

Jam: Maybe I should have said not «stage decorations» but stage technology… We used to have just visuals, but now we also have these little lights that are controlled by me.

M: And each light is assigned to a musician, so I get a light, the guitar player gets a lights…

How do you control the lights? Are they linked with the instruments somehow?

Jam: They’re connected to me and I press buttons and knobs and stuff like that, the lights will do as I say!

M: Yeah, it’s pretty cool! So they can change color, Jam can pan the lights so you get the stereo effect, he can turn the lights off and then we do a collective solo, we play when our light is on and we stay silent when it’s off, as if we were puppets and Jam’s the conductor.

So Jam is the main guy in the band?

M: Well, the main concept, to be honest, yeah. But composition wise we both write the songs. I mean, I write my own songs and he writes his own songs.

Jam: I wouldn’t say that I’m the main guy, but yeah…

So you two are the leaders of the project?

M: Yeah, we’re M&Jam and then the rest of the band are the experiment.Well, the concept relies heavily on the use of technology, because my technology is live looping, which isn’t something new, it’s the way I do it that is a bit different, but his thing is completely new. Nobody does what he does.

Jam: I’ve been saying that I’m a visual musician. That means I do exactly the same thing musicians do, I can do unisons, I can choose whether to go along or go against what’s going on with the music, the result is with the lights or the visuals on screen. I can screw up or do it good, and it’s in the visual realm, not in the sound.

And what about the loopings?

M: I do it a little different in the sense that I try doing things that are not so modal, they move around, so I do polyrhythmic things, tempo modulations, or I’ll do harmonic modulations and I do it live with the band. Our drummer has a metronome, he hears what I’m looping so we can do it together with the band. I think that’s a big difference as well, cause you see a lot of people that do the looping in a duo or while soloing, but then it’s a bit different.

What kind of tech stuff you use for looping?

M: I use TC-Helicon Voicelive Touch 2, I use the effects and I loop on it.

If i’m not mistaken, it has only a limited memory space for loops, like 42 seconds?

M: Yeah, it has 6 different tracks available and it you want to use all of them you can’t really do a lot, because they share this memory space. So you have to just compose things bearing it in mind. So I keep in to one bar. The thing about this particular looper is that I can use my fingers, I hate using my feet, and it’s really quick to change from one loop to the next, I mute them, I bring them back.

So you don’t have anything pre-prepared?

M: Nothing! It’s all done live! That’s why it’s so hard! And it’s very easy to screw up!

What’s the hardest thing in the project?

M: I would say getting musicians to jump into this experiment, because it is an experiment and sometimes you need to find the right musicians to understand the concept and be willing to take part in something so quirky, there are so many details, nothing is by chance. The setup, sometimes, when they give us tiny screens, that we hate. We generally need big screens for our visuals, because that’s when they’re more impactful, sometimes we’re not very lucky.

Jam: Sometimes we get the powerpoint presentation screens… For me the most challenging is the amount of time… I have to do the visuals, then I have to do the lights, and it takes a while to put everything together, to set up the stage.

What kind of tech do you use?

Jam: For the lights I have a device that converts USP signal into UMX, that is a sound switch, and on the road I use some sort of DJ/VJ software from Serato which is very reliable, it’s mostly around these two things. Obviously I use a ton of software to create electronic sounds, animations, all that stuff, but on stage those two are the main ones.

The concert itself was… interesting. One thing I can say for sure is that I have never experienced something alike in my whole life. Something like that should definitely be seen and heard live, because when you’re immersed in that act, you live it. The DVD I got through that Indiegogo campaign was awesome, no doubt, but a live act was a totally different story and much more impressive. It is unbelievable what Melissa is able to do with the effect unit, being able to control the device with such precision is admirable, especially concerning the fact that while experimenting the musicality of it all doesn’t suffer. The video/light installations is also a pretty impressive thing, the moment I saw that Jam was scratching using a piece of video I started thinking that tomorrow is here and that modern technologies allow you to do so many different things, it’s just your own ability to think outside the box that puts a brake on everything. This band proved to me that the borders of jazz music are stretching further than I thought before. The world is full of possibilities and you have to brave to use them in order to leave your mark in history.