Edgars Cīrulis on «No Other Way Out», the new album of «The Coco’nuts» band

The second full-scale studio album of a Latvian band, in between a relaxed melancholy and playful lightness 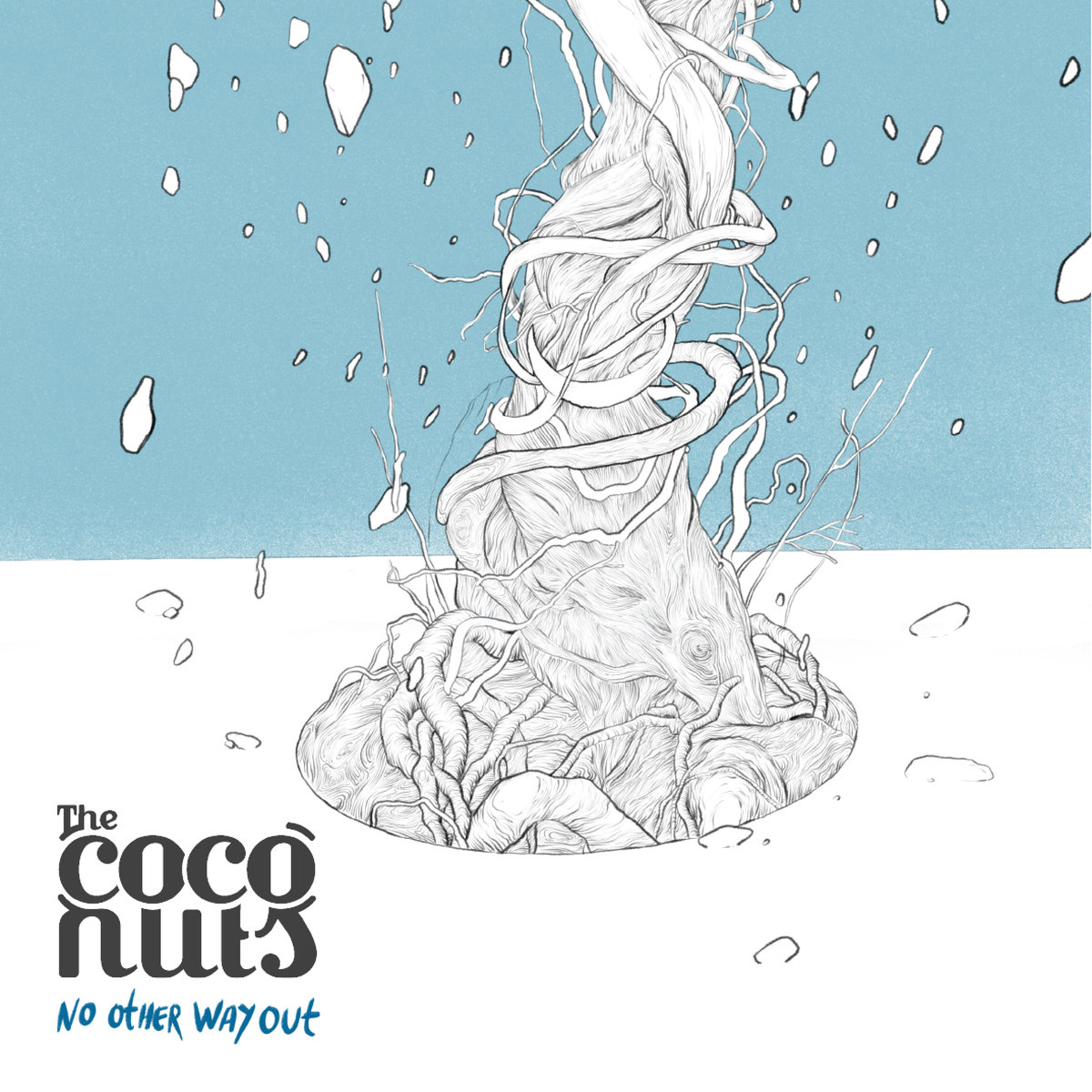 «No Other Way Out» is the second studio album of the band called «The Coco’nuts». Calling themselves a funk, blues, indie and alternative jazz band, The Coco’nuts try to put away the borders in their music, use textures of different genres to create a new sound.

The band consists of Marija Broča (lead vocal), Monta Kurme (vocal), Inese Bērziņa (vocal, keyboards), Pēteris Narubins (guitar, vocals), Jāzeps Podnieks (flute), Artūrs Strautmanis (drums) and Toms Valmiers (double bass), as well as some guest musicians that have joined the recording sessions. One of the most often invited brass groups on the Latvian stage — trumpet player Oskars Ozoliņš, trombone player Laura Rozenberga and saxophonist Kristaps Lubovs, as well as a cellist of «Melo M» Miķelis Dubčins and percussionist Miguel Andres Hernandez Giraldi from Chile. «No Other Way Out» is an opus consisting of 8 compositions, each part of which tells a personal message. To my ears the album is divided into two parts, where the first one is more ethereal, striving for complex forms, interesting instrumental tools and colors, therefore the second part of the album is compositionally more simple, based on song form and united band dynamics.

GOGOGO
The famous slow start. The Coco’nuts have decided not to begin their story with explosions and fireworks, but to slowly attract the listener to their lair in the middle of the forest, where so many tiny sounds are around accompanied by a light, fragile calmness.

I want to mention the wistful instrumentation of the band here. Ascetic and melodic drums style deals well with guitar, airy flute and light, springy double bass. The composition points 2 main textures: the verse is toned down — with tiny filigree sounds, while the refrain features voices together with the flute on a very common base of a 6/8 ballad — staccato guitar accompaniment, regular drum texture with brushes. After the second refrain a short voice interlude comes into the spotlight, and a voice canon with a dreamy guitar improvisation right after that.

The composition ends just like it has begun, with a guitar melody, creating an impression of a closed cycle.

LET ME BE
A quick tempo composition with a typical for funk music springy guitar and bass accompaniment. Even though funk music usually creates an impression of masculinity and macho (that’s the reason why funk music is so often characterized by such adjectives as dirty, powerful and so on), this example helps to break this impression thanks to the aim of the band to experiment and break the aforementioned genre borders. The flute and the round in terms of tone polyphony make an album more subtle in a way. Speaking of the composition itself, the dynamics quickly settles, and we’re brought into a more introvert kind of a sound, where the guitar plays a felt-through blues kind of solo. Pink Floyd’ish mood, vocal harmonies and organ brings us into a funk-related style, however with a completely different emotional filler. A refrain texture of the previous part takes over quite restrained vocal harmonies, until a short refrain episode begins. The composition ends, returning to an introvert color in between the voices and the bass.

I WON’T SEE YOU
The composition begins with a short double bass bow episode, followed by a heavy sounding part, in the beginning of which there’s an interplay of drums and guitar, with a flute melody on top. An interesting solution is created in between metric modulations (proportional, very precise tempo changes), happening between the first and the second thematic material.

After the instrumental part of the composition two different parts create a contrast, where one is way more relaxed, with keyboards overtaking a harmonic function and guitar joining the rhythm section, and the second is jazz-inspired with a walking bass, typical for jazz music harmony, colored by a hint of swing. Then a short minimalistic keyboard interlude follows, leading us into the third part of the composition. This is a so-called instrumental solo period, where the voices use vocal textures that could be found in Steve Reich’s music. Here and there drums, guitar or a flute hop onto the foreground. The song ends with one more metric modulation, where many different modern-sounding harmonies interchange on one harmonic sequence.

NO OTHER WAY OUT
Active electric bass line grants the composition a hurried mood, contrasted by a lyrical and cool singing. Very intriguing and melodic drums solo in the middle of the composition gives it an interested dynamics, it even gets a narrative role of a kind. Then the guitar and drums interplay we got already used to follows, traveling across metric modulations, fast dynamic interchanges, until the musical explosion. This is a very powerful trump card of the band, and it’s very pleasant to hear it being used quite often in the whole album. «No Other Way Out» is a two-part opus, where each part in a kind goes together with the previous one, but changing the sound, not holding the listener by his hand, but moving forward. In the end the composition gets more chaotic with quick changes, but I guess that this composition sounds very different when played live, without time limits, typical for the recording.

I have to mention that a flat sound of a digital keyboard makes the composition sound less intriguing. It would be way more pleasant to hear either acoustic piano, or no keyboards at all.

FADING SLOWLY
A melodic drums sound lives throughout the whole album. Delicate instrument interplay creates a light net as a base for the voices. This is a bright example of an indie-pop ballad. In the middle of the composition a flute solo awaits us — characterized by a wet tone full of breath, but sometimes my ear misses tone variations. The use of dissonant effects is very pleasant, beginning and ending the composition.

GOOD TO BE HOME
A very calm composition, precisely illustrating its name. A tasteful guitar tone together with the swinging rhythm section accompaniment gives the voice a nice «pocket» to sit in. besides that this composition doesn’t try to persuade or surprise, is just a pleasant, easy listening work.

MYSTERIOUS LADY
The blues ballad, where the man’s voice is on the foreground for the first and the last time. Soul back vocals, melancholic and creamy guitar tone is based on a faintly heard Hammond organ background. The brass trio together with the voices create warm, falling harmonies, with a sharp and emotional guitar solo contrasting it all.

IN BETWEEN THE WORLDS I SEE
An atmospheric composition, just like a farewell glow from «The Coco’nuts». It begins with a wordless vocalization and turns into a rippling and easily glittering texture, created by a drum interplay with soft mallets and separate melodic parts played by the guitar. After a short guitar solo the composition gets a more aggressive dynamics with a heavier drums texture, and a full of drive guitar interplays with the voices. The composition evaporates into a small percussion interlude, where all the other instruments get an atmospheric function again. During the reprise the main material of the composition gets its full sound.

The music doesn’t try to be pretentious and loose. It easily sits in your ears, not trying to persuade or test you, but more or less invites to rest, feel good and begin a journey. It witfully mixes different textures, plays with metrical and tempo modulations, not letting the music sit in and become predictable.

As I’ve mentioned in the beginning, some songs are compositionally and idea-wise a bit weaker than the others. Sometimes the sequence of the parts in the compositions seems a bit chaotic, the instruments and their play demand a bit more precision. Some technical flaws can be found in the album, but it doesn’t take a lot away from the whole experience.

Overall the sound of the album and the band is characterized by a very specific mood — somewhere between a relaxed melancholy and playful lightness, with short, explosive contrasting episodes. The length of the album is at its best, not letting this mood become depressing. The length of the album, the choice of the compositions and their sequence together with performance quality make us feel that «No Other Way Out» is a ready product. I will certainly be waiting for the next album of the band to see where else they can arrive in the future.