Cyril Moshkow’s impressions from the «Jazz in Latvia 2018» CD 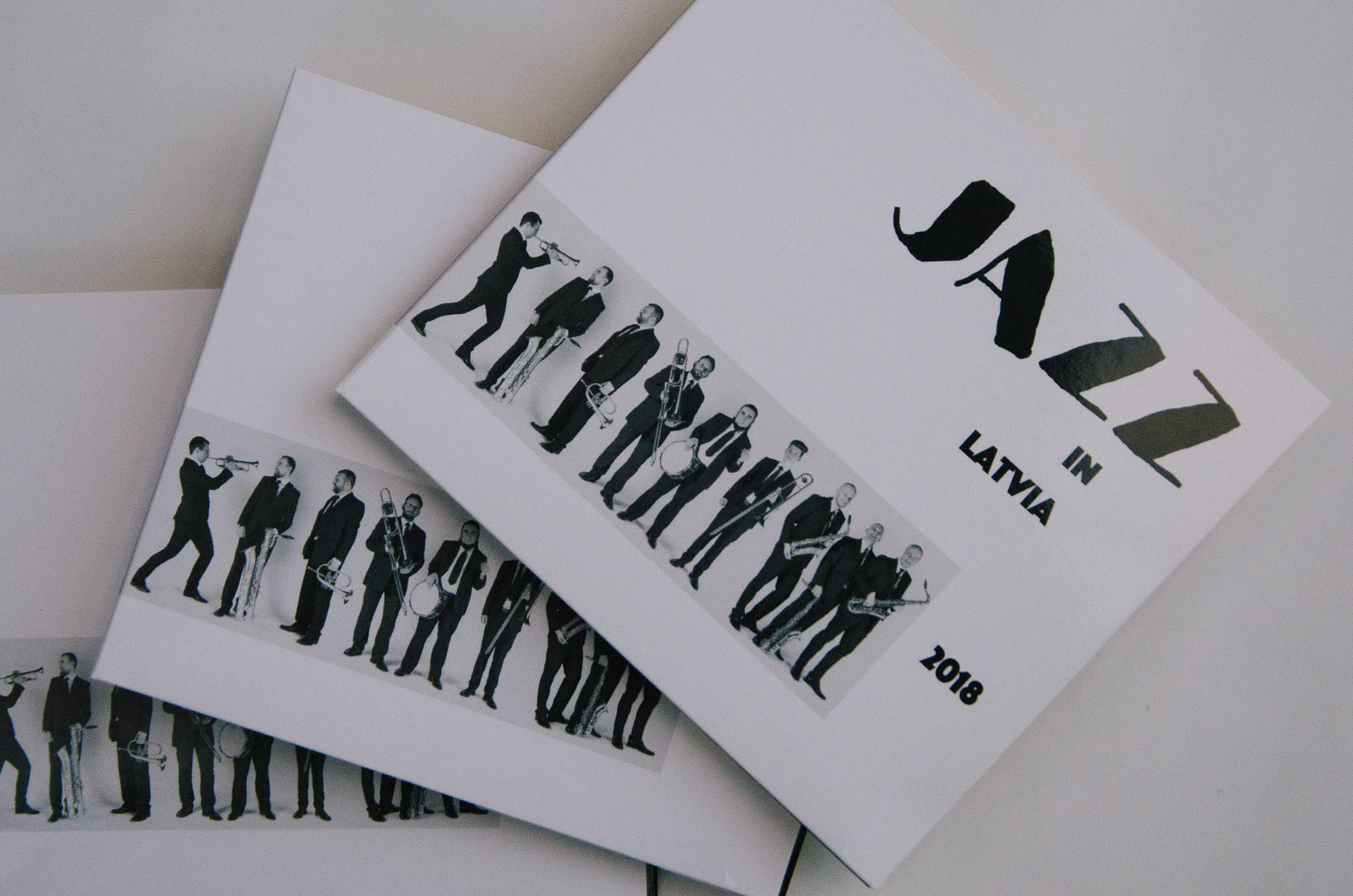 1. Latvian Radio Big Band
Lead by Kārlis Vanags, the orchestra has significantly grown during the last years: now this is a European-level big band, hereby presented by Matīss Čudars’ composition — programmed by character, reminding of some «cartoonish» compositions by the modern big band composing classicist Gordon Goodwin, however, compared to his works, extremely important instead of ironical. It’s a pity that the program character of the piece makes the orchestra responsibly play all noted text for all seven and a quarter minutes, not wasting time on improvised solos, therefore it’s hard to say whether the soloists’ level is good enough.

2. Very Cool People feat. Kristīne Prauliņa
Raw, powerful, but quite reserved soul-rock with an impressive and precisely played groove following the canon, with an expectedly barking brass section — but the voice is still the most important figure here. Kristīne Prauliņa knows what she’s doing, reproducing style patterns as expected, but not diving into them fully, making the listener remember he’s dealing with North Europeans, not crazy Southerners. If soul-rock can be cultural at all, this is the case.

3. Kārlis Vanags Trio
Kārlis Vanags is not only the big band leader (historically the leader of two, as it seems), and not only a saxophonist: looks like he’s also a clarinetist, unexpectedly tacky by play, and sounding interesting in an ascetic sound atmosphere of the guitar-bass-drums trio. Rhythmically this track is a bossa-nova, but intonations take us back to the cosy and pleasant notes of an old Baltic popular music scene, which I remember perfectly well of the same instrumental tracks that the Soviet radio broadcasted during breaks in between daily programs, when I came home in the preliminary school on the 70-ies of the last century. The only thing I didn’t understand is what happened to percussions in the last two choruses — the feeling is of the two drunk lumberjacks that entered an old cosy cafe and started jigging.

4. Jazzatomy
Two main engines here are the vocals of Evilena Protektore and piano of Artem Sarvi, but the sound picture is way more complicated than it may seem from the first notes: this isn’t just a modern groove, that is in a way a prog-groove, put together by a collage method, combining rhythmically contrasting episodes, dramaturgically put together into a seemingly available song form. The picture is completed by non-banal wise arrangements that change a sound picture in every in every contrasting episode, and a non-template work of a sound engineer, who has created his own original sound atmosphere for every episode: one gets especially impressed by the piano that almost drives into the ears of the listener for its solo.

5. Klausies. Слушай. Listen.
Melodeclamation — or most probably just declamation — during a reserved work of a duo of saxophone and drums that imitate free jazz. Imitate because they are so ideally inscribed into the pauses between words and lines of a tacky syllabic poem in English that one can imagine this simply cannot be a free improvisation — if the saxophonist Toms Rudzinskis doesn’t have note sheets in front of him, he for sure has the poem text written and read by Aleksandra Line, and he precisely connects his playing to the spoken word. This makes the project noticeably different from the spoken word in the early free jazz of the 1969s: young LeRoi Jones (not Amiri Baraka yet at that time) has just read his «Black Dada Nihilismus» on top of the fierce jazz of the New York Art Quartet. Here the musical canvas is being felt as free jazz, but a «cerebral» free jazz: disciplined, thoughtful, discreet.

6. Lauris Amantovs Jazz Quartet
One hundred percent conservative, extremely precise, stylistically correct tacky jazz mainstream — mainstream of the times when Miles and Coltrane have taken the front row of the mainstream far away to the irregular rhythms side, crazy ecstatic flows and dark emotions, and conservative parties have stubbornly unfollowed, sharing their principles of a cosy jazz canon: precise swinging rhythm, nice intonation, cosy sound picture, that envelops the listener in the dark shades of cocktail bars and with a fantastic laziness of high-class masters that tells him ancient and kind fairy-tales about everlasting happiness. This is so cosy and tacky that it even lets us imagine some postmodern stylishness of great soloists, first of all, pianist Viktors Ritovs and the leader, trombonist Lauris Amantovs — just because it’s too hard to imagine that in the end of the second decade of the 21st century this can be played seriously.

7. Krists Saržants Quintet
A really young pianist, student of the Latvian Academy of Music, Krists Saržants seemingly listens to a lot of modern music which is called jazz in Europe, but «modern European music with jazz influences» in the plaсes where jazz itself was born. There are many influences in his track, and it’s extremely important that those influences are being put on the canvas of his native ground: this is a jazz (OK, Euro-jazz!) arrangement of a Latvian folk song. But while listening to this only track, it seems that wasn’t there an emotionally bright vocals of Evilena Protektore, the young pianist doesn’t have enough his own creative background to show the world his original product yet.

8. Equanimity Trio
It looks like the power trio fashion has at last reached Latvia as well — loud, straightforward broken rock rhythms, most of them being 8/8, sieved through a jazz trio instruments: acoustic piano, acoustic drums and acoustic double-bass. Pianist Edgars Cīrulis, bassist Jānis Rubiks and drummer Rūdolfs Dankfelds play exactly that. A swing type of the rhythmical movement both in a rhythm section and solo doesn’t exist at all: everything is played with direct 16-s, just like rock music. Of course, 15 years after The Bad Plus and of course Esbjörn Svensson Trio it’s extremely hard to say something new in this style, if one continues to use its language pure, without adding any cross-genre elements and additional timbres. But «Equanimity Trio» plays this music with a huge enthusiasm, so that the listener can even believe they’ve invented this style right now and themselves.

9. Daumants Kalniņš Quintet
One more Pan-European movement — performing a jazz-oriented modern popular music using one’s native language — has been brought to Latvia quite early, during a Soviet period. A 28 year old Daumants Kalniņš is quite successful in this direction. Be it because he has been raised a classical singer during his childhood, or because after his teenage voice mutation has performed in modern musicals, but his work with the text, with bringing a message of the sang lyrics to the listener, leaves a great impression, even if you don’t understand what he’s singing about. This track (and the whole album that contains it) features poetry of a Latvian national classic Fricis Bārda, and I have to tell that it’s obvious he’s pretty artistic and paying great respect to a poetic canvas of the song. The track is decorated with an exquisite, very jazzy solo of a pianist Kristaps Vanadziņš.

10. S&T Syndicate
The information about the track in the CD booklet is decorated by a lot of genre definitions: here you have fusion, funk, ambient, drum-and-bass, acid jazz, some post rock as well. In fact, here you are listening to a pleasant, easy-listening instrumental pop-rock of a thoughtful mood, which could be good as a background music in a cafe loved by a modern youngsters — alright, here and there one or the other instrument lets itself go a bit higher on a dynamic degree: a guitar or a saxophone somewhere far away. Only one thing disturbs one from enjoying a calm flow of music: straightforward sound of drums that makes you remember the enthusiasm of an amateur school-time rock band.

11. Arta Jēkabsone
A young Latvian vocalist now studies at The New School in New York which has one of the best jazz education programs in the jazz capital of the world — and this is immediately heard in her track, recorded with New York coursemates: overall creativity degree and a level of instrument knowledge (including voice) are quite high. Alright, those musicians still have many years of polishing their skills ahead, but their enthusiasm and openness to the newest tendencies of American jazz cannot leave indifferent. It’s especially good that Arta is doing this on her native ground: the CD selection contains her interpretation of a Latvian folk song, and this interpretation also speaks about a 23-year-old singer being sure of her country’s culture, at the same time showing that she has had some time to learn a lot in America: she now masters not only some skills, but also applying those skills to things that are close and dear to her, organically uniting American jazz language and a national musical basics.

12. The Gerhard Ornig — Toms Rudzinkis Quartet
The leaders of this quartet, Riga saxophonist Toms Rudzinskis and a trumpeter from the Austrian Graz Gerhard Ornig, have studied in Amsterdam Conservatory, which is now actively rising in the European table of ranks in the jazz education field. The drummer Andris Buiķis and the double bass player from London Pat Cleaver who grew up in France and lives in Amsterdam, also studied there. All four of them are still quite young musicians, but all have quite an extensive international experience, way further than only in a jazz field. As a result, this powerful international quartet plays powerful international music — tense, loud, tough and exciting modern jazz mainstream that includes many cross-stylistic elements. Ornig’s trumpet solo is particularly impressive.

13. Syncope
Alright, why not include a rock song in a jazz selection? Especially if it’s played precisely enough (if we don’t pay attention to the stiffness of the rhythm), quite convincingly sung and, most importantly, decorated with a powerful, virtuoso and uncompromising jazzy solo of the most famous saxophonist of the modern Latvian jazz scene — Deniss Pashkevich, and noisy electric guitar solo (Āris Ozols). Following it doesn’t manage to blur the impression of clarity of saxophonist’s thought.