Atis Andersons on how he learned to live, not leaving things that could be done today for tomorrow

Our modern world is full of opportunities, especially for the young generation — while you live in the European Union you can easily choose whichever school you like and apply there to study. This, of course, is an amazing thing, except for the occasions, when a young and talented person leaves and never comes back, then it’s a little sad. And I get that, really, you’ve spent 4 years in a different country, in a different world, built yourself a new life and then you go home, where in these 4 years you are basically forgotten, because let’s face it, that’s the story of modern music business — you have to always be active in order for people to remember you. Coming back is hard, because you have to build your life anew. It’s easier to stay abroad, where you have it all worked out, where you have new friends, new contacts, where the society is full of chances and ways to improve yourself. But there still are some cases, when a young and talented musician does come home to share his knowledge and to influence the growth and development of our local musical scene! One of those exemples is Atis Andersons, a young man who was one of the headliners of the fifth International Jazz Day Latvia concert in April 2018. 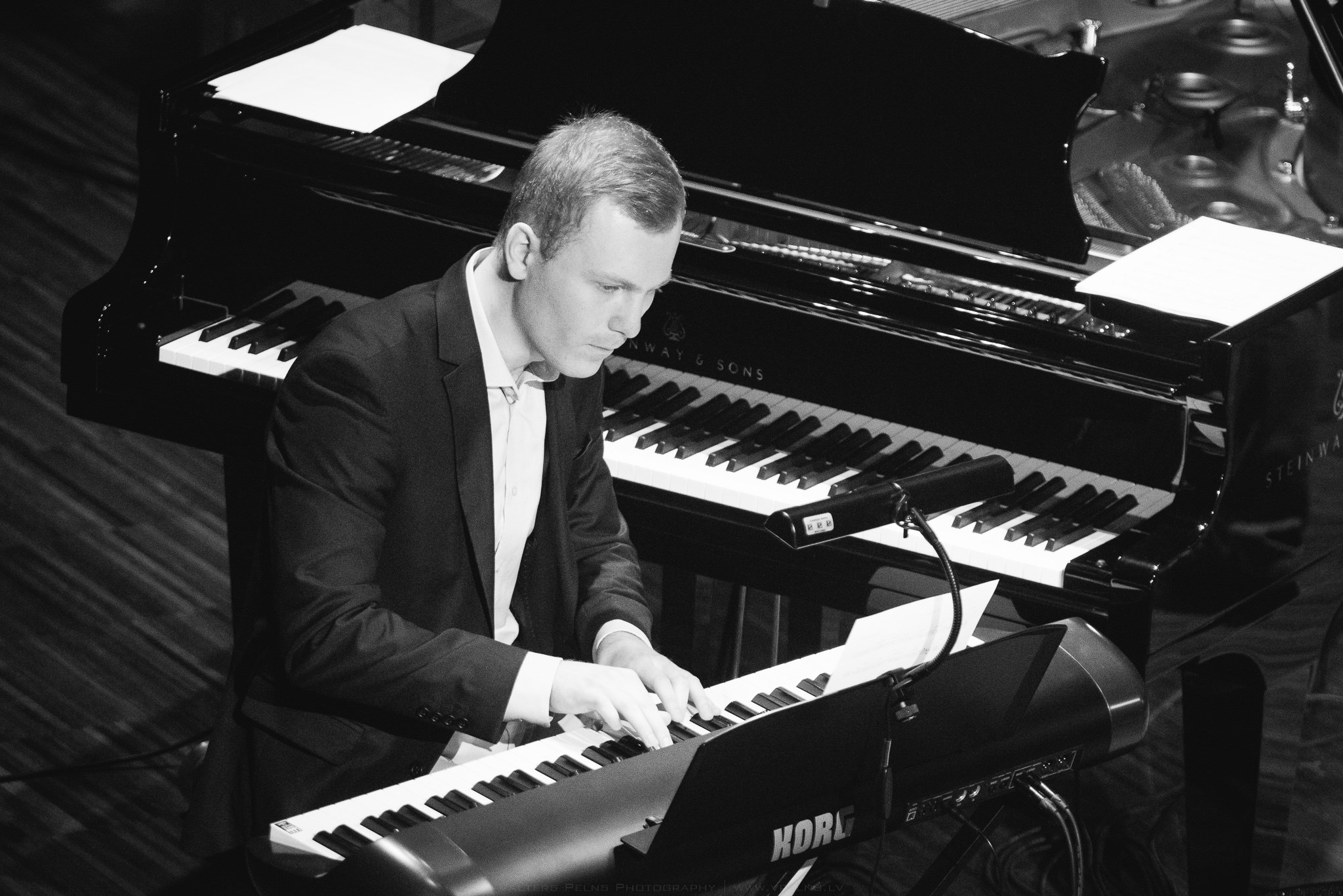 How did you start playing the piano?

I don’t really remember the beginning, it is probably the same as for most of us — parents decided that I have to play something. I started when I was 6 years old, I went to a music preschool on Skolas str. Classical piano, of course. After that I enrolled into Jazeps Medinsh music school. All the jazz started a bit later, after some 7 years.

Was it a conscious decision?

Can’t say for sure… I have a 2 CD set that my father brought from France, I used to listen to it all the time. It was incredible, a totally different energy. There were Art Blakey, Stefan Grapelly, Buddy Rich and some other cats. I was 13-14 years old and it was… Wow! What’s happening? And yes, I want it, I can do it as well! I think this is exactly what marked the turning point for me, these 2 CD’s. At that time I happened to play a bit of guitar as well, and the piano was not something close to heart, because I had no choice, not really, I had to play what I was told to play, and that was solely classical music. So I had to look for something else to do. We had some lessons at school, but it wasn’t enough. I started playing by myself, searching for different sounds, bought some digital books, my first jazz steps were while playing guitar. And then I met Rūdolfs Macats. In Medinsh school he was one year above, he as well was on his way to this freedom of jazz, he was looking for the same thing as I was, so we began playing together.

Did you study guitar at Medinsh as well?

No, that one was in Adazhi, there in a music school they bought new guitars for some school trip. I wanted to find something new and fresh.

And then you went to RDKS?

Yes. Somehow that guitar hobbie faded away with time, and I realised that I just have to continue with the piano, because I do want jazz. At the same exact time when that realisation struck me, they opened a department and I went to take entry exams, but just looking at the requirements I couldn’t understand a single word, the terminology was completely foreign to me — what is a chorus? Theme? A person with classical education will never understand what do these people want, you have to bury yourself in encyclopedias and explore what that all is. My second attempt was in 2006, and then I was accepted. It was a good decision, because that school has put me on the right tracks, gave me the right direction.

How did you manage to switch from classical piano to jazz?

You need certain knowledge, although the instrument is the same. You have to work really hard. In truth, I admire those who are barely 15 years old but somehow manage to play as if they were 40! But that is a totally different story. I had a theory book in front of me. I had to work at my technique, turned out that someone taught me wrong, so in the end I could have skipped everything before that school altogether, because I had to learn to play the piano from zero again. I remember that at one of my first lessons there I was nervous, because it was the first time I had an honest wish to play the instrument. The teacher put a sheet of paper in front of me, there was the circle fifths and we started talking about all the keys at once! Inversion of triads, the same as I now teach my students, some successfully, some not. Just these three notes in the right hand, a bass in the left and that’s where the jazz harmony begins. My first jazz tune that I’ve learned was «Just Friends».

I think that every student that went to RDKS had to play «Just Friends» as his first jazz tune, because it was the first one in Mark Levine’s book! Also it was where I finally started playing with other jazz musicians. My first collective experience was a combo (a jazz ensemble). There we were told about the roles of each instrument in a band, who is responsible for what, a team work principle. Apart from that I played a bit with Kārlis Auziņš. I remember there used to be a place called «Bastejs», I played there for half a year. Sometimes with a vocalist, sometimes with a double bass player Toms Timofejevs. There was this beautiful white grand piano and the whole atmosphere of a mafia movie, that was cool. 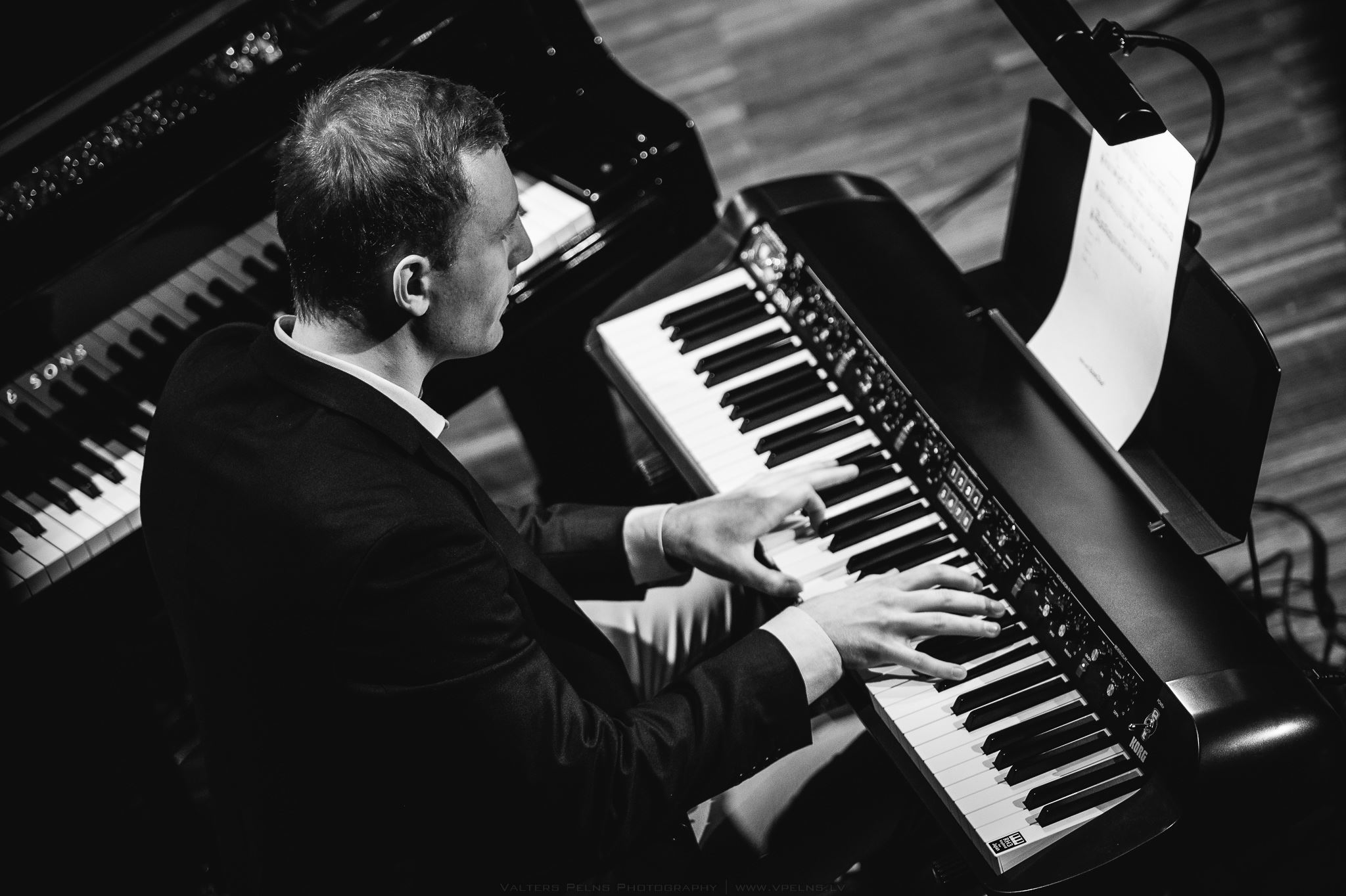 And then you graduated and decided to go abroad?

That was an interesting thing that I’ve noticed in my students as well. When the time of studies comes to an end, the time of reflexion begins. I had that time as well. My artistic life in whole was like a roller coaster, ups and downs all the time, I couldn’t understand whether to continue playing the piano or to quit. I decided that it would be nice to do something else. I started browsing through different courses available in European schools and found one program in London, England, that had a couple of courses combined — jazz piano and something else in addition.

If I’m not mistaken, you chose composing for movies?

My main specialty was the piano, and the second one — music technologies. During the 3 years of studies we went through many different aspects, starting with the theory of sound, mixing, work in the recording studio, creative sound, experimental sound… But I liked composing for movies the most. I used to be a huge movie fan, that’s why this course sucked me in from the first moment, showed me what was actually happening with the sound in the movies. I used to think that everything is filmed with one camera, that the picture is the most important thing, but in reality the sound plays a huge role in it as well, it a humongous teamwork. I got carried away in it, started composing, it all came together in time. We had different tasks in the university, for example — there’s a video and you have to build two different moods using just the sound effects, noises of everyday life, record it in the studio and integrate it into the video. After that we had to compose music for some short films. We had only the picture and we had to record all of the sounds from scratch, dialogues as well. A huge teamwork and and extremely interesting one at that.

How many years were spent in London?

4 whole years. One fifth of a lifetime… I feel sort of a keenship with the brits. I have some of it within me from the time spent living there.

How did you decide to come back?

At that time I didn’t visit home very often and maybe that’s why I missed it so much. To be honest, at the beginning I thought that I’d leave and won’t come back, that I’d move first to London, then from there to the States, or Canada maybe. I was looking at different options, but it all came to a halt because of the expenses — it costs a lot to move. And then if you do move, you’d have to start from the beginning, anew… Too crazy.

Been there, done that?

That thing, yes. And also living and surviving in this huge city is expensive and requires a lot of financial input.

And what about doing art while you survive?

I was happy that my studies were more about learning to live. To be in a completely different setup, everything happens differently there, you even drive on the opposite side of the road, which I managed that quite successfully.

All these changes, did they get in the way of your composing?

A bit, yes. Not a lot of time left for the arts.

Why did you come back?

One of the reasons was that I’ve seen who were the people who came back to Riga after studying abroad — Čudars, Macats, Rudzinskis, from time to time even Kārlis Auziņš had a concert or two. In any case, these people I knew, they came back and I got the feeling that things were happening in Riga. Looked like there was enough work available, different concerts were happening all the time, so I decided that it’s time to come home. Also that was because I realised that if I wait any longer, it will be even harder. Also I wasn’t that lucky with the jobs in London, I found one, decided that I’d work for a while, save up some money to take a free year to go to jam sessions, concerts… But it all fell apart pretty fast. The moment I lost that job, I remember, I hopped onto my bicycle and thought — that’s it, I’m going home, today I’m buying a one way ticket home. And I was happy, it freed me from a huge weight. I came back and started to work. Then one night I decided to enroll into our academy to get my masters degree in jazz. I thought — it’s now or never. If I wait, it will be harder to get into learning mode again.

And now you teach? 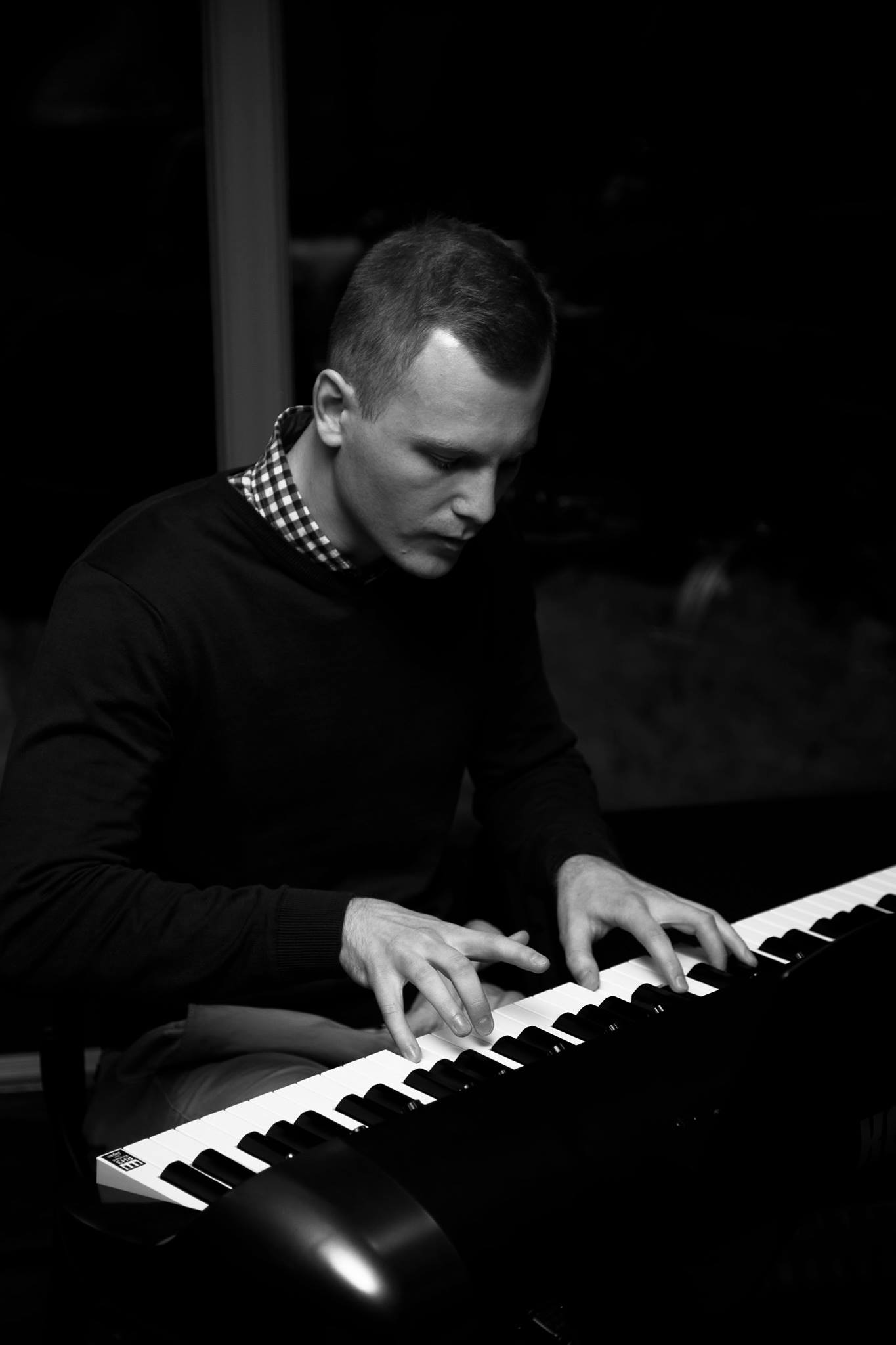